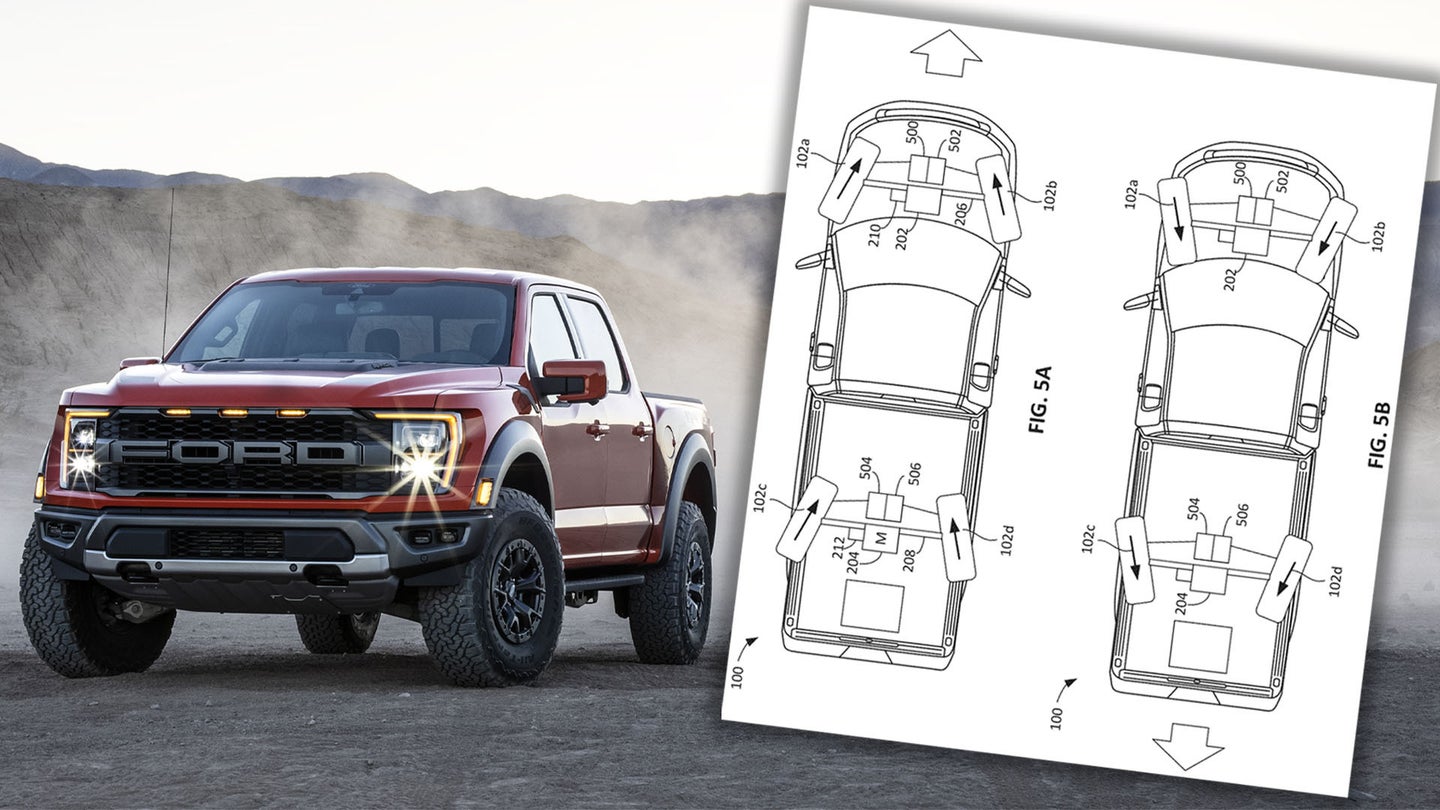 One of the most eye-catching features of the new GMC Hummer EV and the upcoming Chevy Silverado EV is the four-wheel steering system, particularly the Hummer's "Crab Walk" mode. The system allows the vehicle to drive diagonally, which GMC says could help the truck conquer a variety of off-road obstacles. It's basically a very neat party trick, and apparently, one that Ford engineers are quite interested in recreating. In fact, patent documents indicate the Dearborn automaker wants to expand on the system's capabilities within its own stock of off-road vehicles.

Documents submitted to the United States Patent and Trademark Office indicate that Ford not only sees value in crab walking, but also in taking concepts like Rivian's Tank Turn or its own Trail Turn Assist to a whole new level. We're talking some pretty crazy stuff.

The patent document itself was filed in late September of 2020, however, it was only published on March 31 of this year. Titled "CRAWL OPERATIONS FOR FOUR-WHEEL STEERING VEHICLES," it features illustrations of a previous-generation F-150 Raptor pickup fitted with steering on all four corners. That being said, it appears that this system will only be for electric trucks like the F-150 Lightning, though. As you'll see below, some of the stuff Ford wants this off-road truck to do necessitates electric drive.

The first item Ford describes is somewhat bizarre. In a nutshell, it wants to turn the front wheels to the right or left while turning the rear wheels in the opposite direction, and then drive the two axles toward each other. In this way, the car can move left or right on a loose surface without moving forwards or backward, sort of like an omnidirectional forklift. If this is a little confusing, the automaker provides illustrations to better explain what it's trying to do.

This sort of system could be achieved with any number of drivetrain configurations, but it seems like a dual-motor layout is what Ford has in mind. As the flowchart above indicates, this system would work pretty seamlessly from the driver's perspective. The truck would stop, the differentials would lock, the wheels would turn, and the car would start moving to the left/right based on undefined driver inputs. Would you turn the wheel to move left or right, or press the accelerator? Unclear. A yaw sensor would ensure the vehicle stays straight, though, modulating power to the front/rear axle to ensure this is the case.

Ford doesn't stop there, either. As well as having a mode for the system that appears to work very similarly to the Hummer EV's Crab Walk, the truck seems to be equipped with steering that is totally decoupled from the steering wheel itself. This allows every single one of the truck's wheels to turn independently, which means that while, say, the front left tire is turned left, the front right tire can be turned right—same for the rear axle. Thankfully, there are pictures for this, too.

Why would a driver want this? Well, basically the patent says that this mode is intended as a sort of last-ditch effort to crawl out of trouble. If you're totally stuck, Ford is kinda saying, "Yeah, sure, why not turn all the wheels towards each other to try to get out?" In theory, this might be able to get the truck just the right amount of traction it needs to free itself. And just like the previous mode, it locks up all the differentials and uses a yaw sensor to make it happen.

The patent further indicates that all of these operations could be completed manually or automatically. It doesn't mention using them on pavement, though, to be clear. "Snow, sand, mud, ruts, etc," are the places where this sort of thing will be used, i.e., a truck potentially equipped with this system won't be able to slide sideways into a parking spot. Not without making an awful lot of noise and probably doing a number on the truck's suspension. The document mentions the wheels will each have their own torque sensors in order to determine the level of traction at every corner, so it will very likely be able to figure out the driver's intentions. Or, Ford could also just say using the mode on pavement voids your warranty, etc.

In any case, I think it's fair to pop a champagne bottle and announce that the four-wheel steering wars have officially begun. Assuming this system arrives on an off-road version of the F-150 Lightning, it's only a matter of time before that truck and the Hummer are taken off-road to test their radical capabilities. If you think Rivian's tank turn was extreme, think again, Dearborn might just take things to a whole new level.