Driving trucks through mines can be monotonous, so now they do it themselves. Sort of. 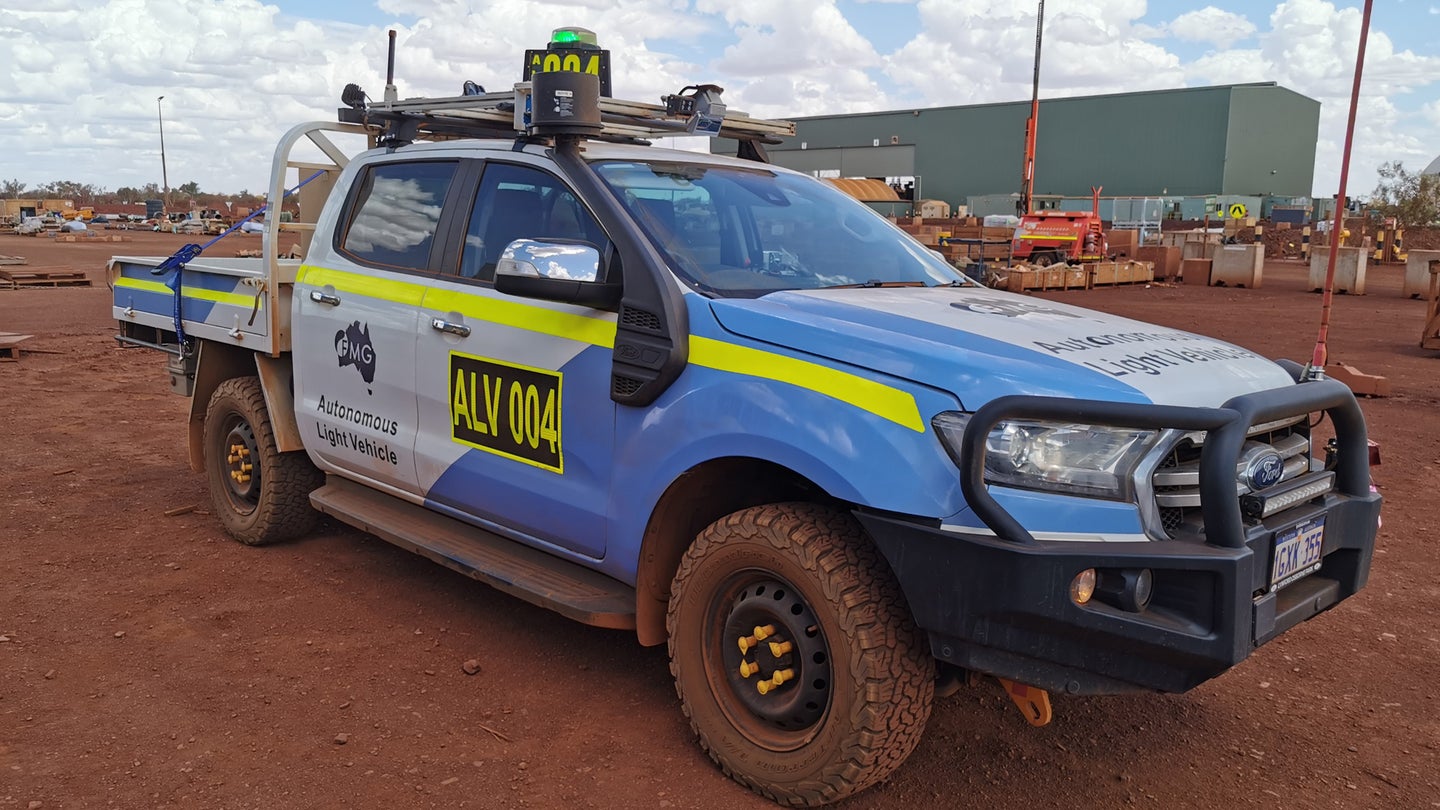 Mining is a dirty, dangerous, heavy job that involves traveling a lot more distance than you might realize. In terms of the tasks most ripe for robotics, when fully automated luxury communism comes in, mining is a key one because it's miserable and harmful but we do still need to do quite a lot of it. So if truly autonomous vehicles existed—which they don't—then it would be an ideal place to start.

Fortescue, a major metals mining company in Australia, has retrofitted four Ford Rangers with LIDAR and self-driving equipment to automate a small part of its processes with the support of Ford themselves. What seems like a small part is actually rather crucial since the trucks are tasked with delivering spare parts to engineers working on mining equipment. They'd been using Rangers driven by humans for the task, which they say were making 12,000 trips measuring 28-kilometers (17.4 miles) in total to deliver spares—that's a lot of time spent behind the wheel for a task that doesn't exactly need a lot of people skills and probably isn't what even the biggest enthusiasts (us) would call enjoyable driving.

Fortescue previously introduced what it called autonomous haulage trucks to its fleet, with 183 trucks performing haulage operations without a driver since last year. And it's not the only mining company doing it—fellow Australians and global mega-mining operation Rio Tinto is considered the benchmark and specialist robotics companies like ASI and ABB are going in hard on selling their potential services to one of the richest industries in the world. But most of the trucks converted are in the European sense of the word—the heavy equipment pictured above, not road cars.

The Rangers converted for this are more recognizable as cars than megalithic engineering structures so it's a bit more tempting to view what they're doing as genuine autonomy, rather than acting as automatons performing processes. But, like with every self-driving car thus far, that's not quite what's going on. The cars are fitted with sensors that will prevent them from crashing into things (Lidar/Radar) and they have failsafe braking systems, though essentially they're programmed to follow set routes, almost like they're on rails. But without the obvious inconvenience, in a ground-moving program, of having to lay them.

They're also fitted with systems that make them, essentially, remote control for when you want to take the car on a trip it isn't already set up for. All of which makes sense operationally, but what happened to the people who used to drive them? You know, the ones who got tired at the end of a shift and had labor rights?

When they brought in the autonomous program, Fortescue said, "Our approach to autonomy has been to be open and transparent with our plans and to work closely with our team members to offer opportunities for re-training and re-deployment. Around 3,000 Fortescue team members have been trained to work with autonomous haulage, including over 200 people trained as Mine Controllers and AHS system professionals."

So they're not just directly replacing jobs with remote control. But in an industry where labor is often exploitative, some of the concerns about automation in mining have to be that the industry is finding economies in a restructuring that it might not be completely ready for. It's not luxury automation if the people who used to do the jobs don't get to benefit from it, after all.

The company’s first European-built volume EV will roll off the lines in 2023.

Finally, the answer to whether you could make the perfect driver in a (computer) lab.

Chile is trying to dry up its mining, not the desert.