Smaller turning radii and increased maneuverability, what’s not to love? 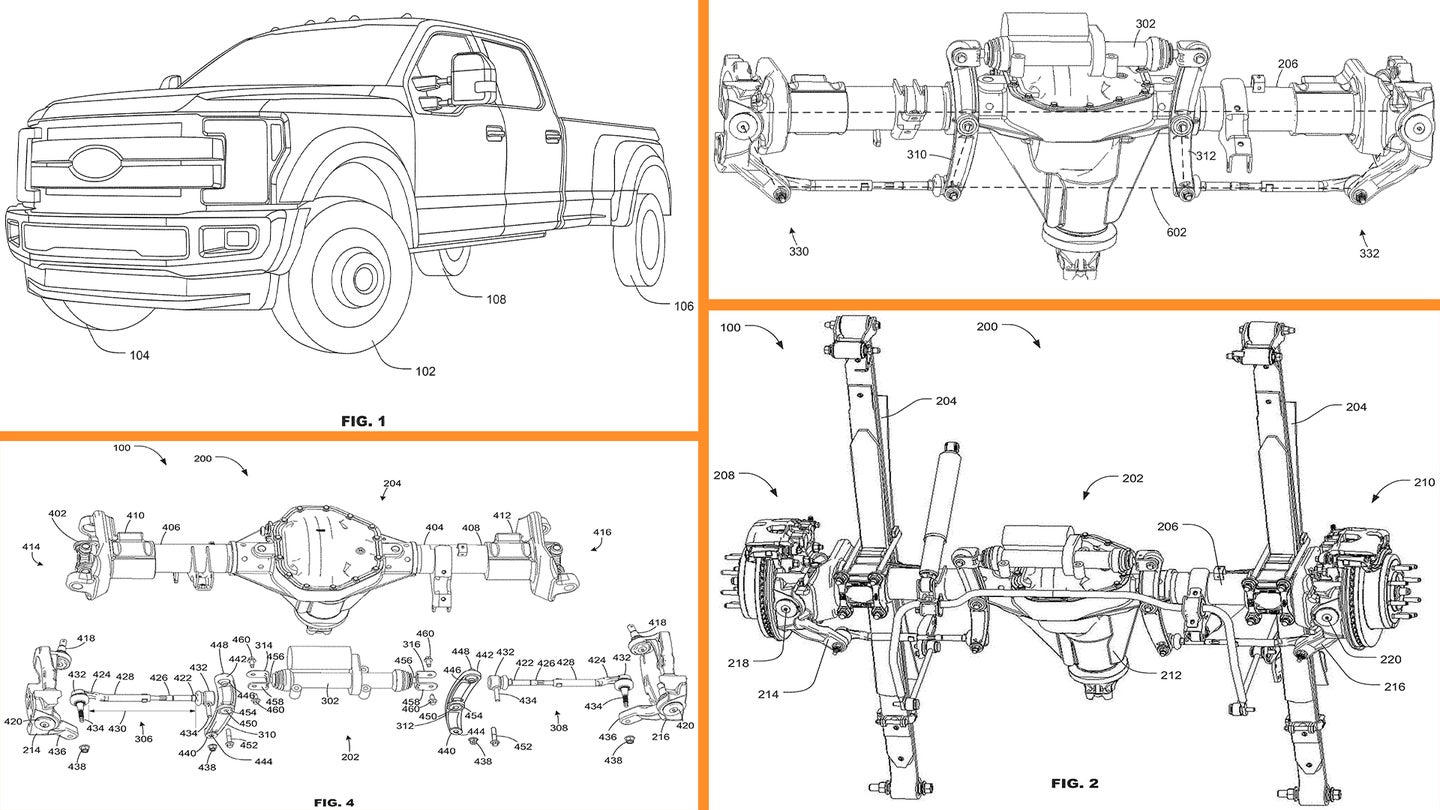 Four-wheel steering systems, like those you get on Porsche's 911, Lamborghini's Huracan Evo and Aventador SVJ, Bentley's Continental GT and Flying Spur, and Bugatti's Chiron (really, any high-end automobile coming out of Volkswagen in the last decade), show how useful these systems can be at virtually decreasing a car's wheelbase and increasing its agility, even among the heavy-hitters like the Bentley boys.

The system, however, has proved to be somewhat too complex and expensive to see members of the public want it on their workhorse vehicles such as your traditional pickup truck—though General Motors gave it a try with its Quadrasteer system. The dream hasn't died, though, as according to a new patent filing dug up by The Drive, Ford is looking to adopt four-wheel steering in its future line of F-Series trucks.

The patent filing depicts a new design for its heavy-duty trucks, which consists of a new electronic steering system mounted on the rear axle’s differential cover, which then actuates an extra set of tie rods and transfer links to control the degree to which the rear wheels can turn. The rear axle design utilizes what’s called “Ackermann steering geometry,” which enables both rear wheels to change direction simultaneously during steering and turning maneuvers without negatively affecting the contact patch of the tires, all in an effort to improve vehicle maneuverability as well as handling and performance. In other words, your F-Series is going to get a serious performance boost.

Not only does this unique suspension geometry enable rear-wheel steering with a live rear axle, it supposedly also helps to avoid packaging and functional issues by compensating for the negative rear-wheel camber tendencies caused by solid axles equipped with rear-steering capabilities. Without the Ackermann geometry, the axle would disrupt the scrub radius by affecting the contact patch between the ground and the rubber, negatively affect vehicle handling and causing abnormal tire wear. As a result, the whole point of this specific design is to create a singular common turning point for both the front wheels and the rear wheels to turn on to avoid complications when maneuvering.

This isn’t the first time we got a glimpse of a potential four-wheel steering system for Ford. Back in 2017, German engineering firm, ZF, revealed an F-150 prototype that featured a similar system that steered its rear wheels, reducing the truck’s turning radius by a whopping 10 feet.

It’s not clear if the system patented by Ford is inspired or supplied by ZF themselves, but what makes the concept of a rear-wheel steering system more seemingly viable is the fact that power steering systems are now electrically assisted and actuated, versus hydraulically, which simplifies the entire system.

When The Drive reached out to Ford for comment, a spokesperson responded by stating, "[Ford] submit patents on new inventions as a normal course of business but they aren’t necessarily an indication of new business or product plans." Be that as it may, Ford's recent swarm of patents on things for the upcoming Bronco and Mustang, and indeed, things like the GT500, seem to have truth in them. We'll have to wait and see whether or not Ford brings the rear-steer to market or if, as the representative says, is "normal course of business."