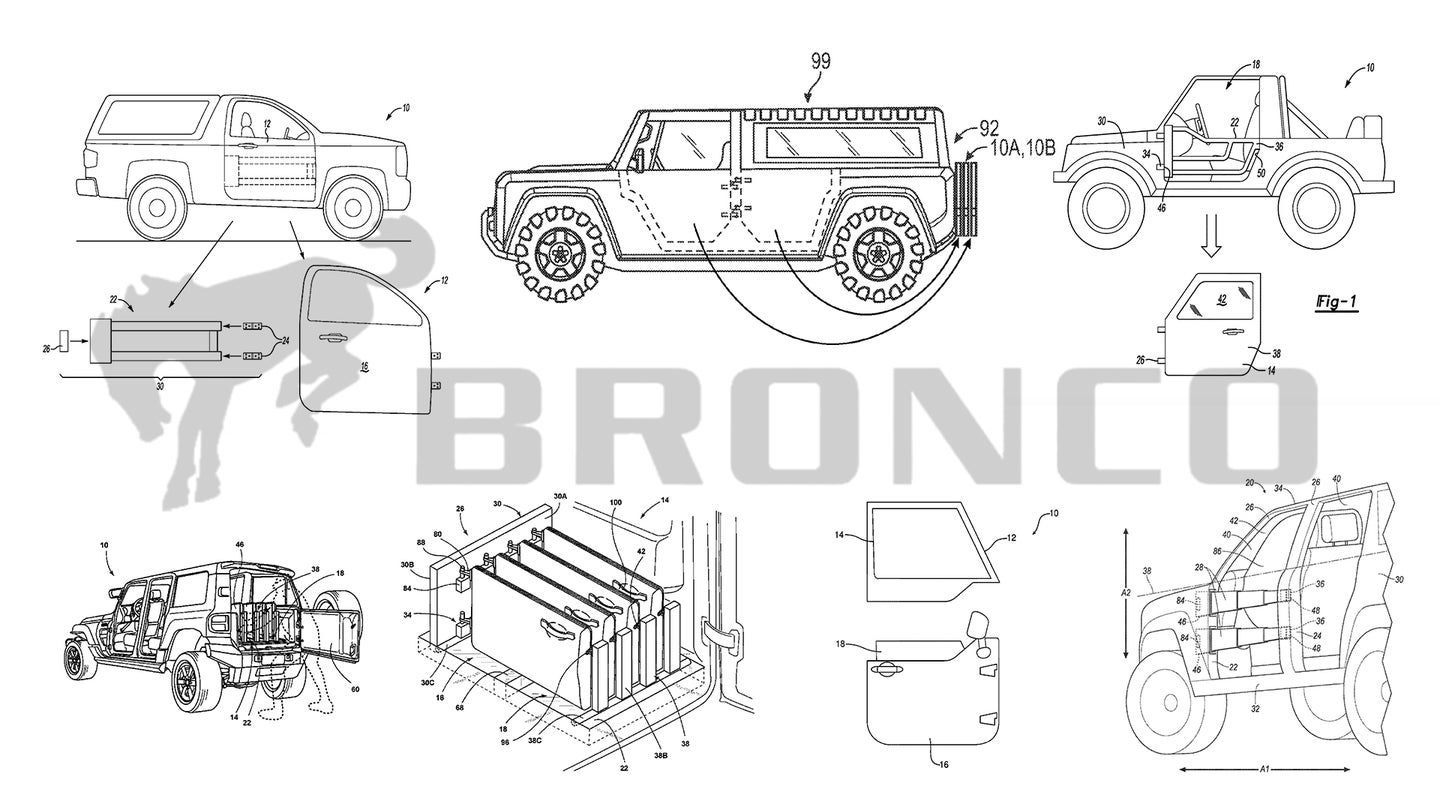 Information on the upcoming 2021 Ford Bronco is still scarcer than water in the Mojave. The only official tidbit we have is that the truck is in fact coming back next year, and it won't be some namby pamby crossover. Of all the other rumors—convertible roof, manual transmission option, a two-door version—few have been as consistent as the report that it will feature removable doors. And a spate of patent filings by Ford over the last couple years shows the evidence is out there.

The latest to prompt a round of speculation was uncovered by AutoGuide last week, a patent application for airbag systems in a vehicle with removable doors. It follows a Ford patent application from earlier this year for a removable outer door panel that would leave a skeleton frame spanning the opening for safety.

But in reality, Ford has quietly applied for at least nine interesting patents related to removable doors over the last few years ahead of the Bronco's debut. The filings cover various methods of construction, passenger safety systems, and even storage solutions, and The Drive acquired them all to create the exclusive full roundup below. Most have never been reported on before. You won't find the name Bronco on any of these documents—but chances are the system utilized by the 2021 Ford Bronco is somewhere on this page. Get ready to feel the wind up your shorts.

This patent covers a door that's split in the middle with the side mirror attached to the lower panel. Notably, the system also allows the window pane to be housed in either the upper or lower half of the frame when they're separated. Solo use of the lower door would be useful "for beautiful days when an open air experience is desired." It's also further evidence to support the rumored convertible Bronco.

Ford's patent here is the answer to every Jeep Wrangler's least favorite part of open-air motoring—stashing the doors. The solution involves a special carrier for the lower door panels to bolt into located in the cargo area. The main issue we see is that it's based around the split-door design and doesn't have space for the upper frames. Also, only a four-door setup is depicted; it doesn't look like this would fit in the two-door version's smaller cargo hold.

And lest you think the Jeep-like truck in the sketches is a leaked Bronco, it's not—it's a Troller T4, the Brazilian equivalent of a Jeep Wrangler whose manufacturer is owned by Ford. What is important is that Troller doesn't make a four-door, so this is clearly supposed to be a stand-in for something else. Companies often use placeholder vehicles from their portfolio for these drawings in lieu of exposing a secret design.

This is where things get a little weird—and interesting. Building off the idea of a split door where the lower half represents a compact, nearly-rectangular panel, Ford's been thinking about how best to store it. One idea is this reverse suicide setup where both the front and rear doors are hinged on the B-pillar so they swing toward each other. When the two lower panels meet, they can be bolted together and stored on either a tailgate or roof rack carrier.

The idea here is for a safety rail (or two) that spans the door frame from the A-pillar to the B-pillar when the regular door is off. Ford describes either having them extended at all times when the door is off, or having them automatically extended when the vehicle senses a crash is imminent. They would also be capable of holding an airbag like the tube frame door described below.

As reported by AutoGuide, Ford’s been thinking about how to provide side airbag protection without a door. The patent application includes a few setups, including a removable tube-frame door similar in design to that of a UTV. But Ford’s increased the theoretical safety by using the tubular structure to house high-pressure gas lines and an airbag inflator. Another scenario covered by the application includes a telescoping rod that shoots across the doorless opening to deploy an airbag in the event of a crash. Flip through the PDF and you'll notice one of the sketches bears a strong resemblance to a first-generation Bronco.

Ford’s patent shows that the Blue Oval is looking at skinning a tube-frame door structure with a detachable panel to retain the normal body lines. It would look like a normal door, but remove the outer skin and you’d have the cage-like, open-air inner structure.

Ford cribbed from the world of UTVs once again with a patent application for a flexible canvas-style door and integrated airbag that's zippered or snapped into place.

This one is more a statement of purpose than anything else, but it shows that Ford has already thought about how to maintain the proper side illumination when the door is removed. The mirrors are mounted on the A-pillar, so their mini-floodlights can still illuminate the ground with, say, a bucking bronco even when the doors are far behind. Again, the vehicle in the sketch is a Troller T4, not the so-called Baby Bronco that's coming... though honestly, we wouldn't mind it if it was.

Lastly, Ford applied for a patent for climate controls that would sense whether or not the doors and roof have been removed for an SUV.

Again, there's no way to know which of these, if any, will make it to the production 2021 Ford Bronco. All we can say with certainty is that Ford's been thinking a lot about how to make removable doors a reality. We'll keep our eyes open for any more Bronco-related patents documents in the weeks and months ahead.

Got a tip? Want to talk? Email the author at Jonathon@thedrive.com, or find him on Twitter @jonathon_klein.