This thing looks like it was plucked straight out of the sky. 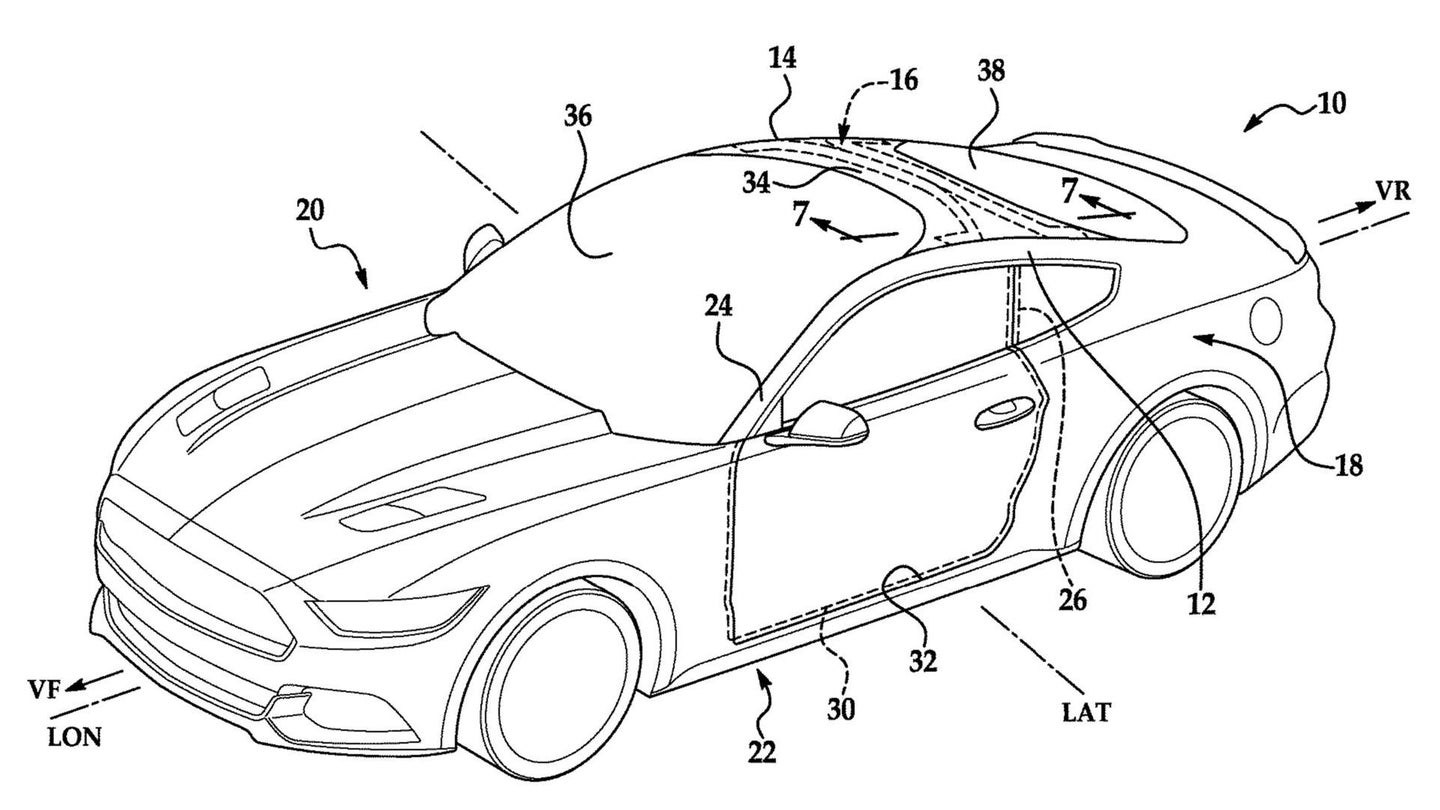 We're still not sure what that loudmouthed Ford engineer meant when they said there’s a "surprise" coming for the Mustang, but a recently unearthed patent filing could give a hint. Out of left field comes a panoramic, fighter jet-like windshield design, one that could hypothetically be seen on the Mustang.

A patent application for the windshield and accompanying roof design was filed with the United States Patent and Trademark Office (USPTO) on May 14, 2018, with the agency publishing the documents in its online database on Nov. 14 of this year. This past week, the documents were discovered by a user of Ford Mustang Mach-E fan forum MachEClub, who shared the find with their fellow Mustang fans.

While one's eye is first drawn to the illustrated Mustang's vast windshield, which would extend over the heads of the front-row occupants, the patent's abstract description is more concerned with how to make such a windshield possible. Ford's proposition is a pair of sturdy roof rails, joined crosswise by two opposing bows, which reinforce both rails and facilitate load-sharing between the structures in the event of an impact, such as being T-boned or a rollover. This assembly, Ford says, could be concealed by a small metal panel in the roof.

As this design is only known to exist in patent drawings at present, we can't be sure that the design is all that effective at keeping occupants safe in a crash. Even if it turns out to be, and Ford uses this style of roof (and windshield) on a production vehicle, it would be unwise to bet on the Mustang being its first implementation. The patent's illustrations merely serve as examples for the USPTO, and don't themselves indicate plans to produce a Mustang (or any model, for that matter) with a roof like this.

Even if Ford does plan to bring a design like this to a production car, the extra cost associated with a windshield this big (not to mention the developmental and manufacturing costs) practically disqualifies it as an option for the relatively cost-friendly Mustang we know today. We could imagine Ford offering a panoramic windshield like this on more expensive models, like the Mach-E or a Lincoln product (specifically the Mach-E's Lincoln derivative), but that's purely idle speculation. For all we know, this could just be for a concept car, one that'll tour auto shows in the early 2020s before disappearing into a warehouse...or a crusher. For the sake of more sunlight, let's hope not.

The danger noodle showed up on the truck’s side mirror as the two guys inside drove through Kansas City.