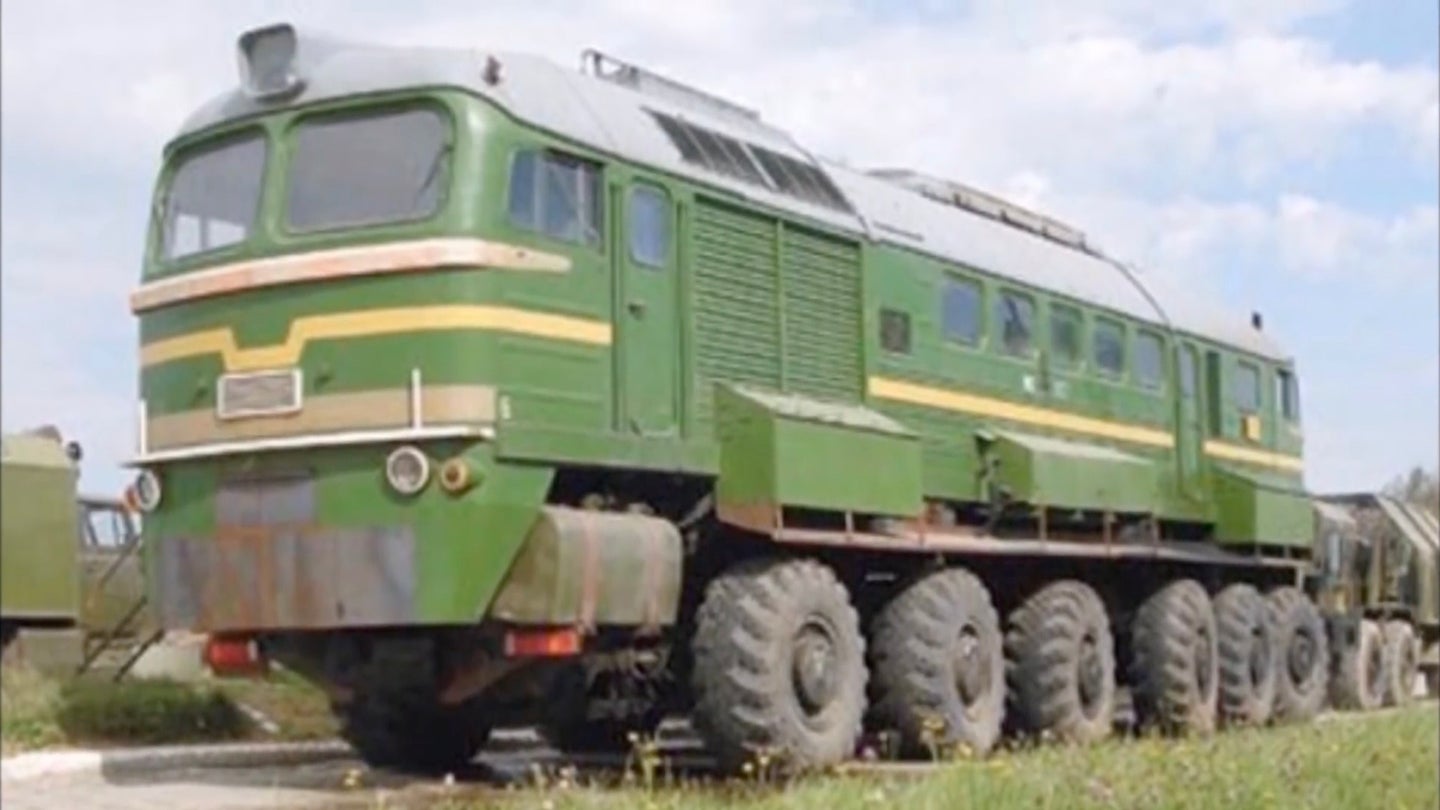 To be born an oil prince is to be born into a competition over who can buy the biggest and possibly stupidest truck. At this point, it's a wonder the Saudi royal family hasn't thrown convention to the wind, and started just driving diesel locomotives with tires. Perhaps the reason they don't is that they remember the Russian military building such a vehicle, only to learn the hard way that a train with tires isn't the greatest idea.

Our story begins in the summer of 2002 at Kolomna Locomotive Works, which Ex-RoadMedia.ru reports was ordered by the Russian Ministry of Defense to build an ultra heavy-duty, multi-axle off-roader. Its alleged purpose was to experiment with all-wheel steering and drive systems on a multi-axle vehicle, though PopMech.ru reports the resulting machine may have also been intended to serve as a mobile power station. Whatever the case, Kolomna began constructing a machine from two wildly different vehicles sharing the same purpose as the last Russian 12-wheeled mega-truck we examined: Carting around missiles.

Like the MAZ-7904, this unnamed vehicle was based on a missile transporter erector launcher, specifically a 12-wheeled MAZ-547 with its engine and transmissions removed. Lowered over top of it, per ZR.ru, was the body of an ex-military Kolomna DM62 "Mashka" diesel-electric locomotive (number 1727), which brought its 14D40 power plant with it. This 150.6-liter, two-stroke diesel V12 produced about 1,970 horsepower, which a book excerpt on a Russian forum says channeled into a 1,300-kilowatt traction DC generator, ordinarily used to power the locomotive's traction motors.

In this scenario, the DC generator instead sent current to 80-horsepower motors mounted on each wheel, all 12 of which could be steered independently—in theory, it could crab-walk like a GMC Hummer EV. Either this steering system or power distribution itself (documentation is poor) was reportedly automated using a bewilderingly complex hydraulic circuit; one that may have been this contraption's undoing.

What exactly happened when technicians fired up this train-truck-thing for the first time is debated, though all accounts agree it wasn't good. One story suggests the machine moved a short distance before its third axle failed and its fourth set of wheels broke away completely, while another says it gushed hydraulic fluid from innumerable leaks. It seems the experiment was deemed a failure then and there, and the vehicle was mounted on static axles, repainted in its original locomotive livery, and put on display outside Kolomna's VNIKTI Institute. Some sources allege it was relocated in 2004, though others imply it was merely shuffled around Kolomna's facility. Either way, the only known footage of it on the move is not under its own power, but being towed by another Russian military vehicle.

This behemoth was said to have been located at Kolomna's "Plant 38" Locomotive Works as of 2011, though that December reportedly saw the facility at least partially "liquidated." Whether this unnamed machine still exists is uncertain; poor documentation and rough translation of source material make it hard to be certain where exactly it was displayed, and thus, where to check on Google Maps to see if it's still around. We've reached out to its last known stewards at Kolomna for any info they can provide, though we have yet to hear back.

While this train-truck's glory may have gone unrealized, Kolomna's efforts to create a locomotive liberated from the rails weren't entirely in vain. Inspired by this stillborn project, someone modded this monstrosity in its full, all-wheel-steer splendor into off-road simulator Spintires. With any luck, a similar mod for Snowrunner isn't far behind.