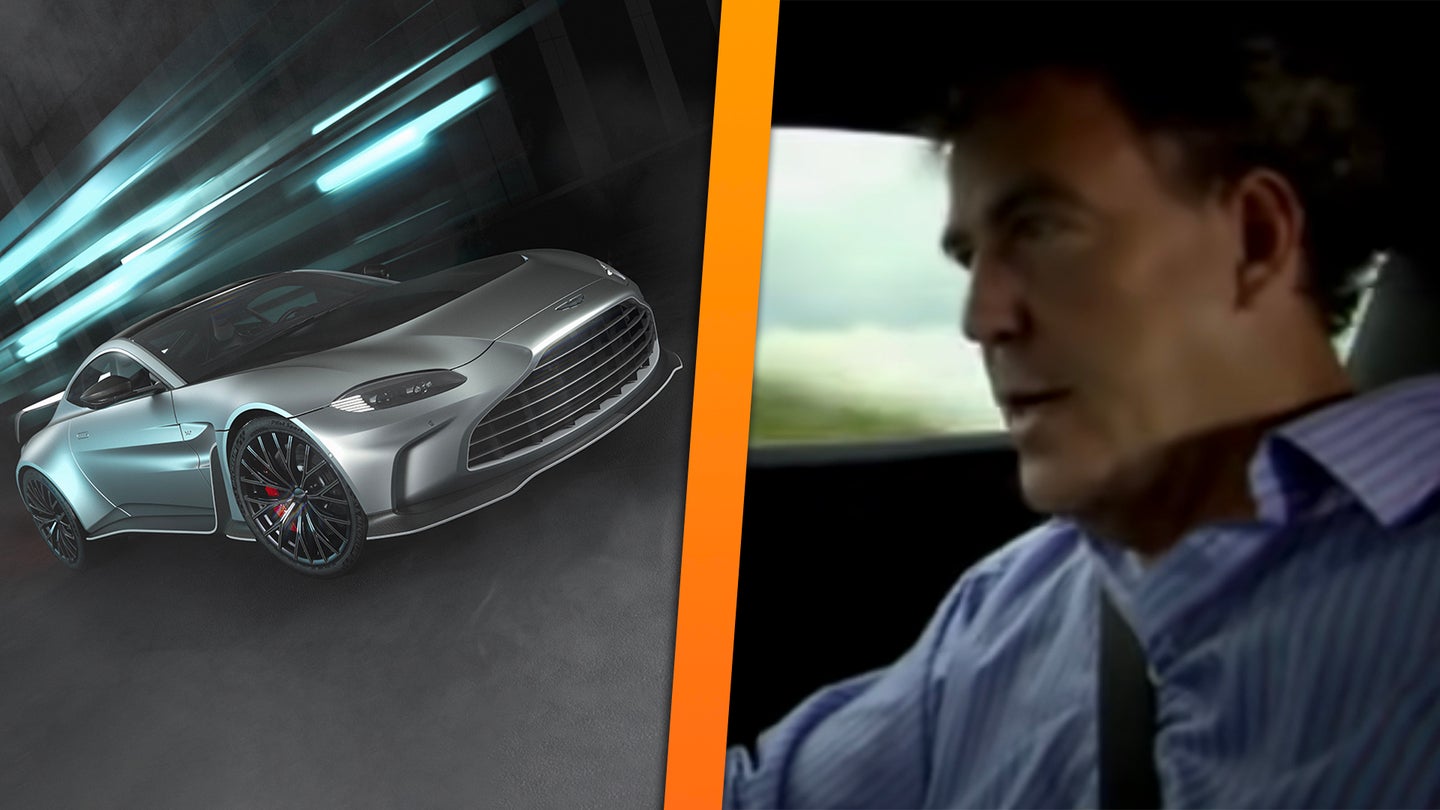 On Aug. 2, 2009, Top Gear aired the finale of its 13th season. It featured Jeremy Clarkson driving a silver Aston Martin V12 Vantage through the British countryside and remains one of the most beautiful and haunting segments the show has ever aired. In it, Clarkson lamented the supposed ending of cars like V12 Aston Martins. But their demise didn't actually happen in 2009. Or in 2010. Or in 2018. Today's 2023 Aston Martin V12 Vantage

is the ending Clarkson predicted—only in the 13 years after the episode's airing, not everything went as he thought it might.

I remember watching the clip the day it came out. On the heels of an action-packed season that was chock-full of loud noises, drifting cars, explosive driving, and yelling—weeks of episodes that featured Michael Schumacher as the Stig, a race in cars versus the Royal Mail service, and a Lamborghini Murciélago LP 670-4 SV—the V12 Vantage film was something else. It was quieter, more somber; emphasizing longer shots, more fluid transitions, more atmospheric music. And the normally garrulous Clarkson had only a handful of lines to say.

He made them count, though.

(There was a quick shot of some CGI deer running across the road after the car passed, which I thought was a bit much.)

"What it makes me feel, though," Clarkson went on, "is sad. I just can't help thinking that thanks to all sorts of things—the environment, the economy, problems in the Middle East, the relentless war on speed—cars like this will soon be consigned to the history books. I just have this horrible, dreadful feeling that what I'm driving here is an ending."

He drove for a few moments more in silence. Then, he bid us goodnight and thus marked the end of season 13. It was powerful stuff.

I was in high school when this clip came out, so perhaps I wasn't as dialed in to the nuances of current events as much then. But to teenage me, things did seem to be pretty bleak. Australia was on fire, we were six years into the Iraq War, the Great Recession was in full swing (though that did cause gas prices to fall). My dad got laid off from his job. Cars—especially magnificent, soulful ones like V12 Aston Martins—were what brought me joy. To think that they'd soon be no more was a terrible thought.

In retrospect, Clarkson missed the mark. Not completely. Just a lot of it. (Who actually hits the mark with these kinds of forecasts, though?) It's easy to fret about the death of supercars from the driver's seat of a V12 Vantage in 2009 while staring down the barrel of All That Stuff—though I am sure the "relentless war on speed" was a bit of overinflated, self-indulgent doomerism—but it's also because we literally had no idea what would happen next.

In Clarkson's defense, he wasn't specific when he said, "cars like this." So did he mean naturally aspirated supercars? Supercars in general? Because if he meant the former, he had a point. The successors to cars like the V10 M5, Porsche Carrera GT, Ferrari Enzo, Ferrari 458 Italia, Ford GT, and Lexus LFA all either went forced induction, hybrid, or were eliminated altogether. Today, only the Lamborghini Huracán, Lamborghini Aventador, and Audi R8 maintain the free-breathing remnants of the late-aughts from which they came.

But as for supercars in general? Absolutely not. The 2010s and subsequent years ushered in power and performance the likes of which we could never have imagined. The Aston Martin V12 Vantage itself stuck around as the V12 Vantage S until 2018. The Ferrari LaFerrari, McLaren P1, Porsche 918 Spyder, Bugatti Chiron, Aston Martin Valhalla, and Mercedes-AMG Project One were one hit after another—to say nothing of the multiple, 1,000-plus-horsepower electric cars that have either arrived or will arrive soon.

In 2009, we didn't know what today's efficiency would look like. But by downsizing engines, giving them turbochargers, hybridizing them, or making them fully electric, we've largely cut down on emissions and squeezed unimaginable amounts of power out of cars we could only dream about just a decade ago. And there are only more coming.

The Aston Martin V12 Vantage did not die soon after 2009 as Clarkson predicted. It will not go to its grave with a 6.0-liter, naturally aspirated, 517-hp V12. Rather, Aston Martin is sending it off new-faced and with a 5.2-liter, twin-turbocharged, 690-hp, V12 bang now—13 years later. And in that span of time, we've seen more than enough evidence that advancements in technology won't let supercars go anywhere anytime soon. There's no telling what the next 13 years will bring. So don't panic.

The final iteration of the V12 Vantage goes out on a limited-production high note chock full of superlatives.