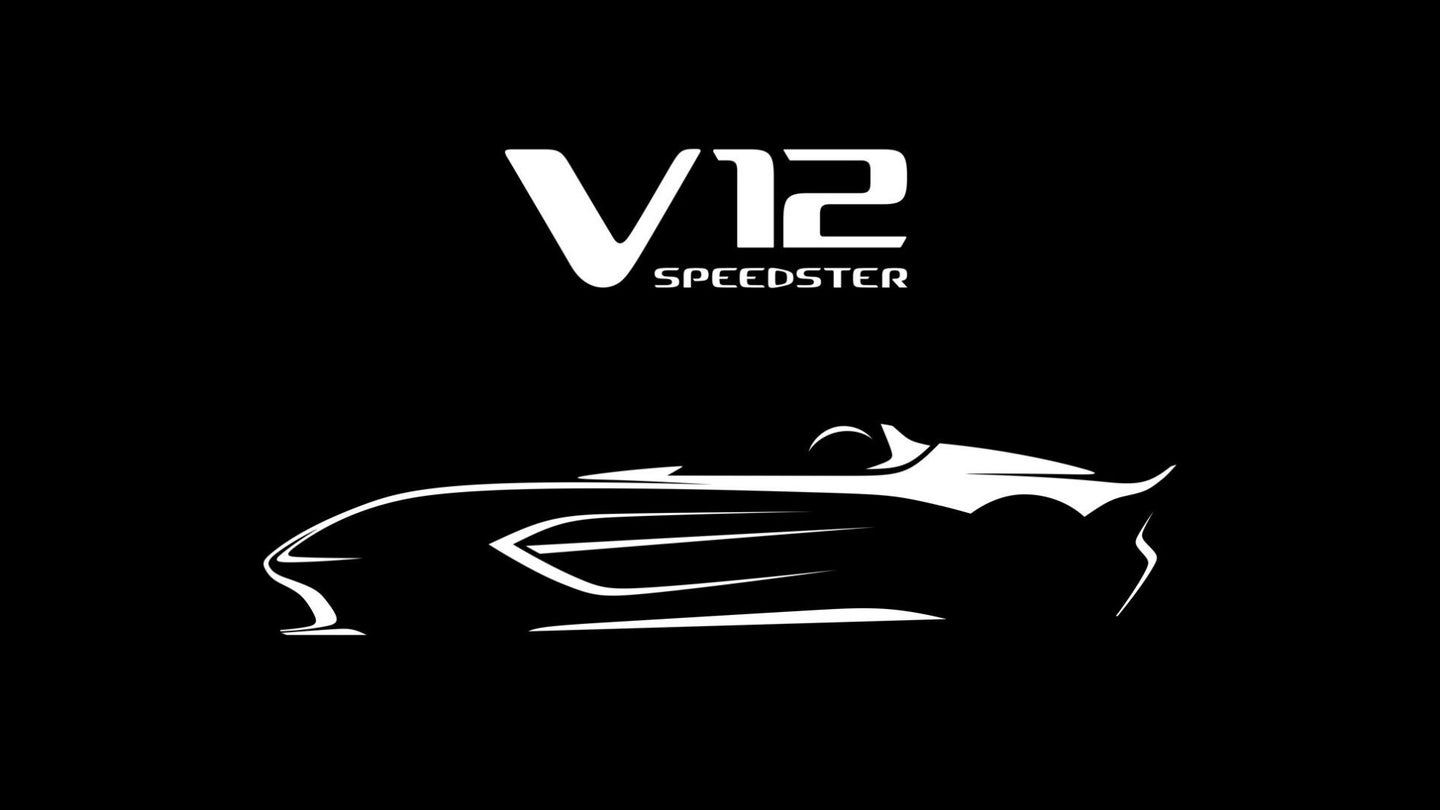 ApplePay at the ready, Aston Martin announced today that the British firm is preparing to launch the very limited Aston Martin V12 Speedster, a no-roof sportscar with the thumping twin-turbocharged V12 heart from its DB11. We’re going to need someone to please catch us as we swoon, hard.

“The V12 Speedster we’re proud to confirm today once again showcases not only this great British brand’s ambition and ingenuity, but also celebrates our rich and unrivaled heritage,” said Aston Martin Lagonda President and Group CEO Dr. Andy Palmer. Details on the upcoming minimalist Aston, however, are still thin, though the company released a few tantalizing tidbits to whet enthusiast’s appetites. First and foremost, that V12.

Plucked from the DB11’s clamshell hood, the twin-turbocharged 5.2-liter V12 has been improved as to produce 690 horsepower and 516 pound-feet of torque, which is a sizable jump from the standard DB11’s 600 horses, but slightly less than the 715 horsepower found in the DBS Superleggera. Putting its power to the pavement, Aston Martin went with a ZF-sourced 8-speed automatic transmission mounted toward the rear of the Speedster’s new bodywork. What lies under that bodywork, however, is still somewhat murky.

To our well-trained eyes, the teaser image released by Aston Martin looks like the V12 Speedster is based on the firm’s Vantage sports car, though the company has yet to confirm that detail. The profile sketch features many of the Vantage’s signature looks, including the front grille and nose design, as well as the upturned ducktail rear section. The teaser also doesn’t look as long as the DB11’s chassis.

What we can tell is that the roof and front and rear windshields are all gone and replaced with the open-sky, wind in your hair, and bugs in your teeth—though Aston Martin looks to have put a helmet on the driver for the sketch. According to the company, the V12 Speedster’s “design, while modern and dynamic, also clearly nods to both Aston Martin’s legendary 1959 Le Mans 24 hours- and 1000km of Nürburgring race-winning DBR1 and the marque’s Centenary CC100 Speedster Concept shown in 2013.”

What the V12 Speedster lacks in clarity and environmental protection, it also lacks in production numbers. Gaydon is set to build just 88 V12 Speedsters total, which is fewer examples than the Valkyrie and Valhalla hypercars. To that end, Dr. Palmer added, “The 88 enthusiast drivers and collectors who secure the keys to these cars can be confident that in doing so, they are also securing an iconic new piece of Aston Martin history.”

As for what the V12 Speedster means to more plebian members of society, if it is indeed based on the Vantage, then its existence likely shows that Aston Martin is getting ready to build a production V12-powered Vantage. The previous generation Vantage had a similar engine swap and did so to great acclaim. Given that success, and if the 5.2-liter twin-turbocharged V12 fits, why wouldn’t Aston Martin diversify its lineup further?

Aston Martin has already opened up the order books for the hand-built V12 Speedster, though the company hasn’t delivered a price just yet. The in-the-flesh production V12 Speedster will likely bow sometime in the next few months, with The Drive’s money on it wowing us at this year’s Geneva Motor Show in March. We can’t wait.

Watch the Aston Martin Valkyrie Shout in Anger From its Cockpit