The 3.9-liter, twelve-cylinder known as the Cosworth GMA engine will soon rev to an astronomical 12,100 rpm. 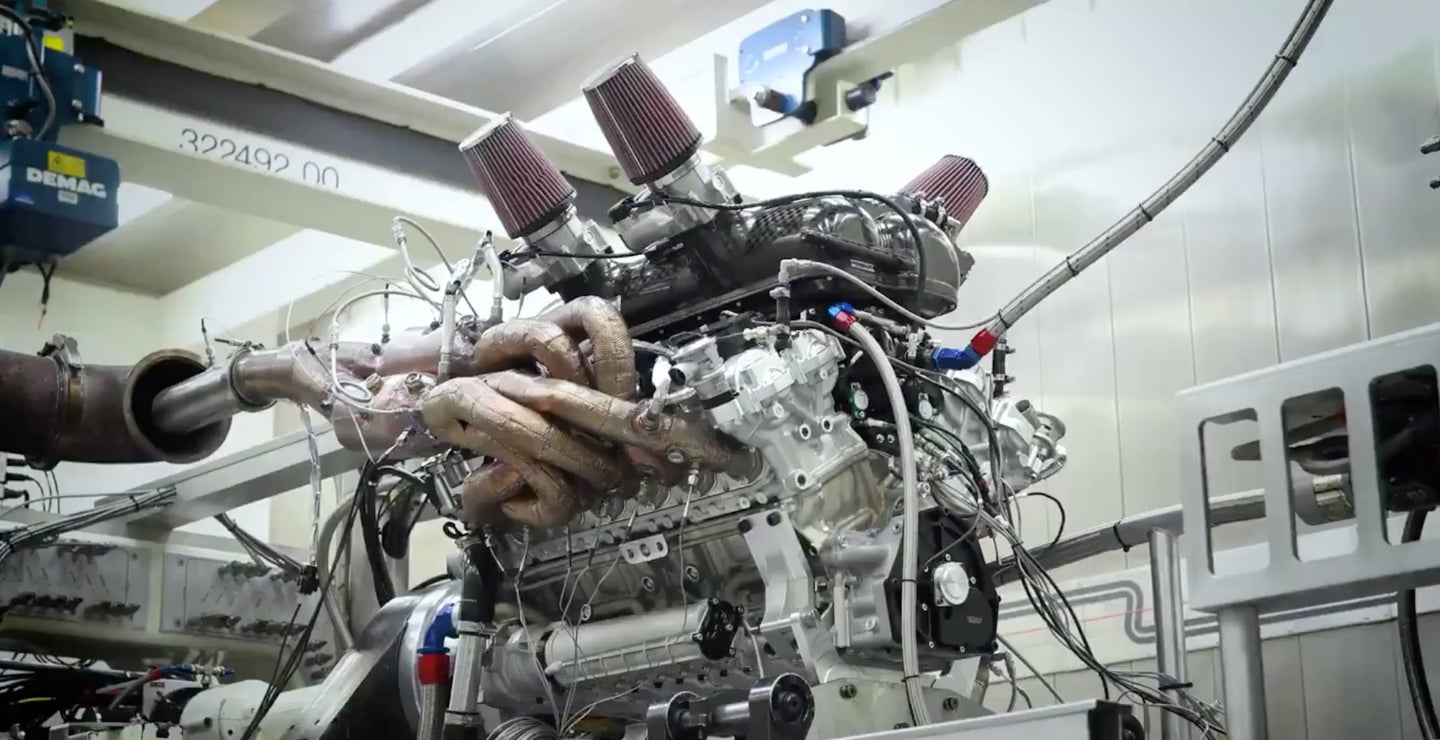 Gordon Murray's successor to the McLaren F1, the upcoming GMA T.50 supercar, taps well into hypercar territory by offering the best power-to-weight ratio in addition to revolutionary active aero in a mid-engine, three-seater carbon fiber package. What's claimed to be in excess of 650 horsepower and 332 pound-feet of torque comes courtesy of a naturally aspirated 3.9-liter V12 custom-built by Cosworth. And now, you can hear all of that in action—albeit a limited one.

England's all-alloy DOHC engine is sure to be filled with machined internals made of titanium and other expensive metals that make it capable of revving to 12,100 rpm, thus beating the Aston Martin Valkyrie's 6.5-liter V12 by what's roughly a standard road car's idling speed. Aston's equally Cosworth-made 1,000-horsepower engine is set to cut its fuel at 11,400 rpm.

What Gordon Murray Automotive claims to be "the fastest-responding naturally aspirated V12 ever made for a road car" was first tested in three-cylinder form, exceeding the team's power and torque expectations already by March. Now, Cosworth is done building its first full-size test engine, with the 3.9 V12 running at 1,500 rpm before the big push for 12,100 rpm. Making its way up to 1,500 rpm tied to a test bench, the GMA-Cosworth V12 sounds pleasantly eager.

GMA uses a relatively compact 3.9-liter V12 instead of something larger to save weight, having chosen not to enter the pointlessly escalating horsepower game. Professor Murray claims this V12 weighs less than 397 pounds, which makes it not just more powerful than the F1's BMW-supplied 6.2-liter V12, but also some 132-pounds lighter. Unsurprisingly, they're rather proud of this achievement:

The GMA T.50's V12 will send its power through an equally new six-speed manual gearbox, designed and built by motorsport specialist Xtrac. Labeled "CPA," this smartly packaged transmission is 22 pounds lighter than the McLaren F1's custom-made six-speed, helping GMA with its overall weight target of 2,160 pounds. Let us not forget that the T.50's titanium pedal box is also 10,58 ounces lighter than the now $20 million F1's. Good value, then.