The naturally aspirated engine builds power to 11,500 rpm and redlines above twelve grand. 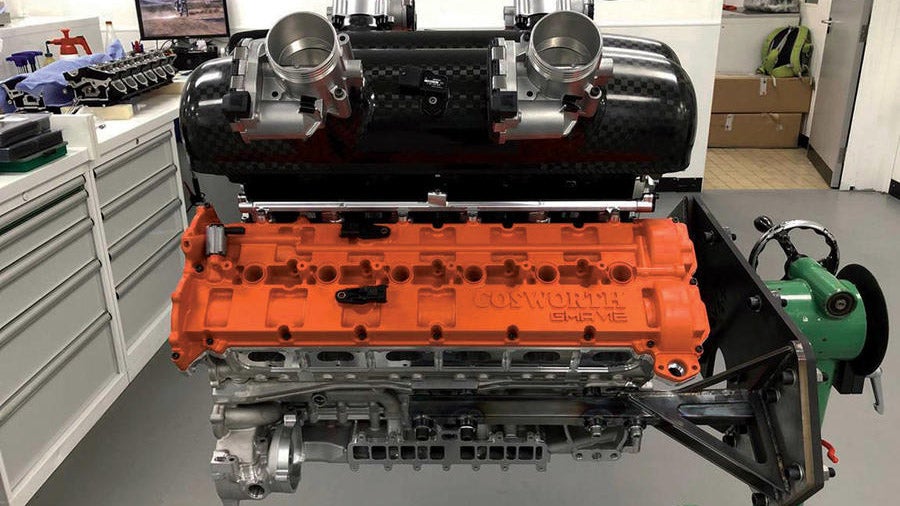 Cosworth already began testing Gordon Murray Automotive's brand new 3.9-liter V12, a mechanical marvel that astoundingly weighs under 400 pounds. We heard it fire up for the first time Monday, and soon, it'll be screeching to 12,100 rpm with no turbos or superchargers holding it back. In short, it's exactly what you'd expect from the genius behind McLaren's almighty F1.

Powering the limited edition GMA T.50 supercar, this twelve-cylinder features aluminum pistons, titanium valves and conrods, an ultra-short crankshaft, gear-driven cam drive and a crank-driven 48-volt generator starter mounted at the rear of the engine, so the car doesn't need a regular alternator. One less horsepower-sucking belt to worry about while GMA saves 46 pounds.

The engine was built specifically for the T.50 and was initially rated at around 650 horsepower. However, Autocar reports that the latest tests revealed not only that the GMA engine will pass all emission regulations without much fiddling, but also that it will produce at least 672 horsepower at a spine-tingling 11,500 rpm.

While the whole dry-sump V12 is just 16.1-inches tall, its shortened crankshaft sits only 3.34-inches above the bottom. With such lightweight internals, Gordon Murray says the naturally aspirated Cosworth-GMA 3.9 will have a throttle response almost three-times as quick as BMW Motorsport's S70/2, the 6.1-liter V12 powering the McLaren F1.

Send those 672 horses and 332 pound-feet of torque through Xtrac's new six-speed manual also built specifically for Gordon Murray's project, and you're in for a ride you won't get from any other carmaker.

Personally, my car could benefit from their three-cylinder version used for testing prior to the real deal being ready. Cosworth, my contact details are on this website.

The 3.9-liter, twelve-cylinder known as the Cosworth GMA engine will soon rev to an astronomical 12,100 rpm.