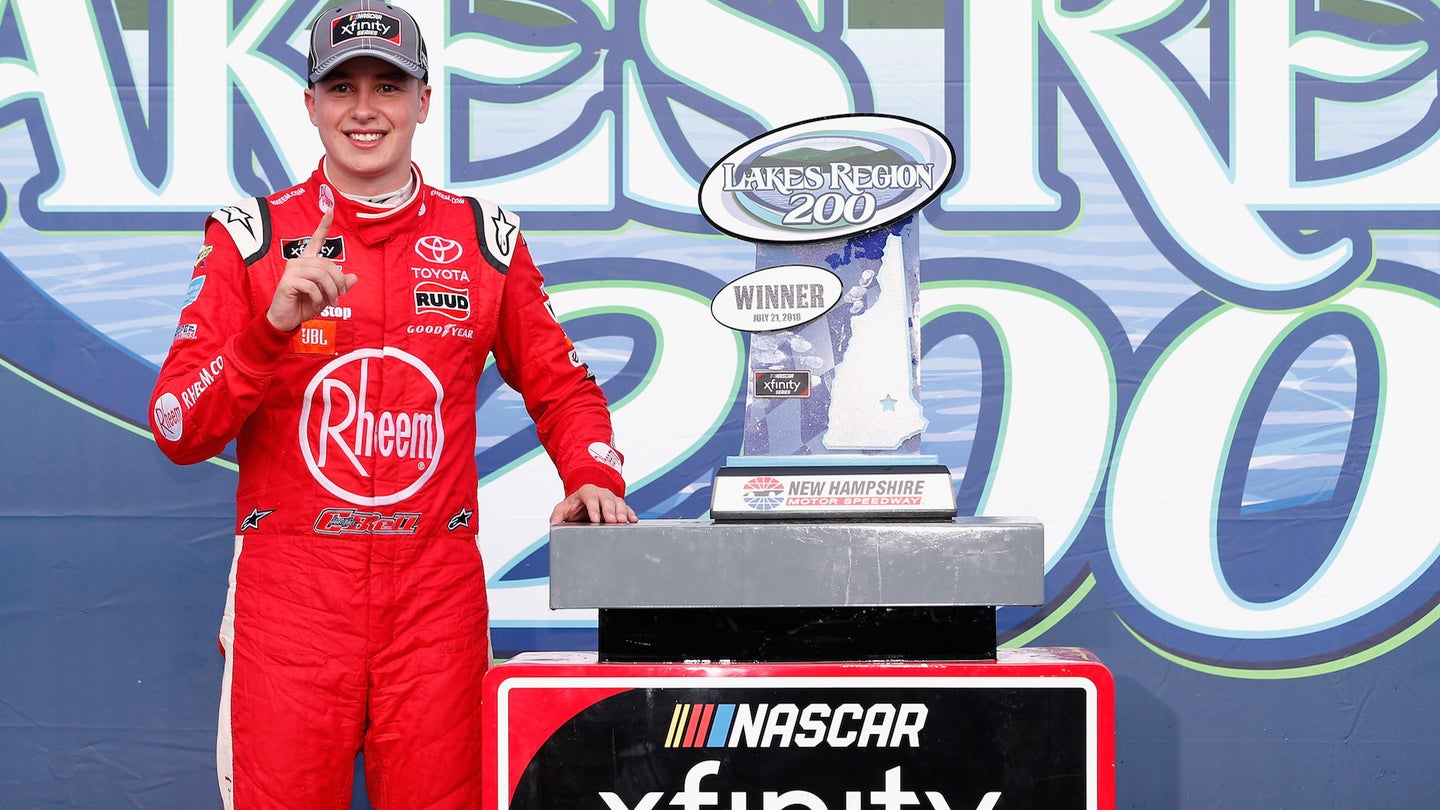 Christopher Bell held off Brad Keselowski in the closing laps of the 2018 Lakes Region 200 at New Hampshire Motor Speedway in Loudon on Saturday to claim his second-consecutive NASCAR Xfinity Series win, his third of the season.

“Honestly, I would have said I’d better have three wins, you know? Whenever you come here, you step in this equipment at Joe Gibbs Racing, you’re expected to win,” Bell said. “Pressure’s on for you to deliver, and thankfully, I’ve been able to deliver at least some of the time.”

“It was a good race,” Keselowski said. ”Christopher drove really well. It seemed like the 20 car [Bell] and our 22 car were probably the class of the field, and we knew it was probably gonna come down to us at the end, and he did a good job. They did a good job and made the right call to put four tires on and kind of got us, there, but it was, all-in-all, a good day. You kind of get mad about second and kind of don’t. You try to respect the fact that it was a great car today and a great effort for our team, but know that the potential is there for more.”

Keselowski got off pit road first between Stages 1 and 2 to take his first lead of the race. Throughout Stage 2, Keselowski led most of the laps, only to lose the top spot to Ryan Preece for a few laps on a couple of restarts. Preece finished the race in the third position.

Elliott Sadler was the only driver other than Bell and Keselowski to post double digits in the laps-led column, running up front for 26 laps after staying out during the caution at the end of the second stage. Sadler, along with several other drivers, pitted during another caution just before the end of the stage. Sadler was eighth at the checkered flag.

On Lap 120, Bell retook the lead but lost that lead to Keselowski on Lap 146. Keselowski was, again, up front after a cycle of green-flag stops inside the final 50 laps after taking only two tires. Bell took four.

“I don’t know if it’s fun, but it’s stressful; that’s for sure,” Bell said of racing Keselowski in the final laps. “You know, he—on tires, there—he didn’t have left sides, and we had four, so that was a big advantage for me, and I was able to get a really good launch on the restart, so, you know, that was really the key there. I think he had a little bit better car than us, but pretty much all through practice we were really equal, so this place has been really good to me in the past, you know? I’ve never been much for a flat track, let it roll, easy in, easy off-type of deal, but this place has been really good to me.”

Bell took his final lead on the final restart of the race, following a Lap 168 yellow flag, the seventh caution of the event.

UP NEXT: The NASCAR Xfinity Series goes short-track racing July 28 at Iowa Speedway in Newton. Preece is the defending winner of the second yearly race at Iowa, but Justin Allgaier was victorious there in the series’ most recent visit to the facility last month.