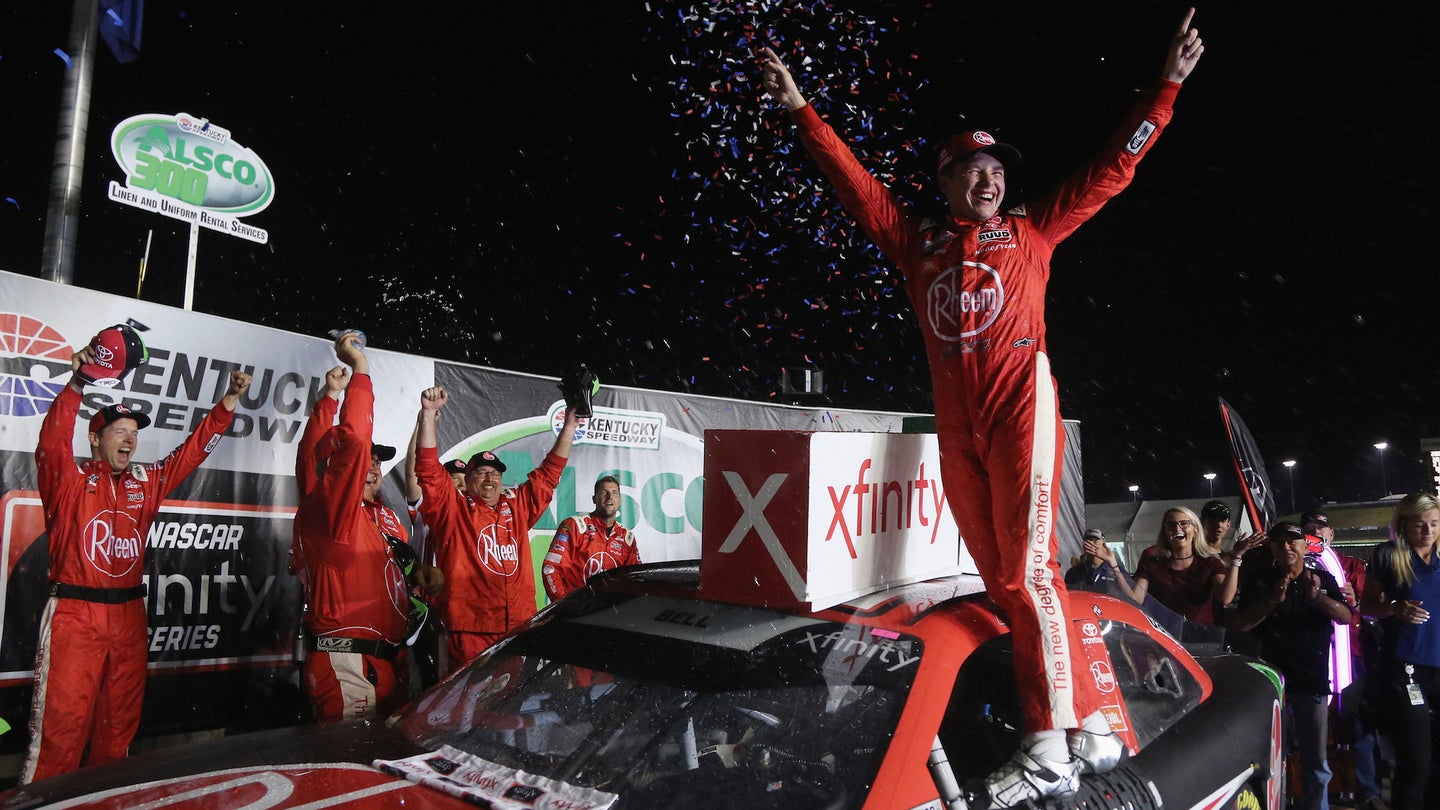 Christopher Bell claimed his third-career NASCAR Xfinity Series win, his second of 2018, Friday night in the Alsco 300 at Kentucky Speedway. After starting at the back because of a tire change resulting from a spin in the final round of qualifying, the Joe Gibbs Racing driver took his first and only lead on lap 184 and led the final stretch of the 200-lap race.

“Man, it was extremely difficult,” Bell said. “Starting in the back there, I knew my car was going to handle a little bit different than what it would at the front, and all throughout practice, I knew that we were—my car that was capable of racing for the win, but when we started in the back, man, it just drives so different back there. The guys kept getting good pit stops, and we’d gain a spot here, gain a spot there, get a good restart, and next thing you know, we’re up there racing at the front, and it’s driving totally different and keep telling myself, ‘We’ve got a shot at this thing."

"It’s just a ton of fun to be here, and I’m thankful that I get to stand in victory lane one more time," Bell concluded.

While one JGR driver won the race, another dominated it. Kyle Busch led over half the distance, running up front for 111 laps and winning the first of two 45-lap stages. Busch, though, after giving up the lead to Daniel Hemric on lap 144 and second to Justin Allgaier, reported what felt like an issue with his right-rear tire. Busch pitted while most of the other frontrunners stayed out during a caution that came out on lap 147 and restarted outside the top-10. He got back up to third by the checkered flag.

“I don’t know if we were just too loose or what, but every time it would step out and get loose, it would tip over on the right rear, so that chicken or the egg,” Busch said. “I don’t know which is which. I don’t know if it’s soft right-rear or if it was just loose, but you know, we kind of started to lose the handle there, that run, and we just weren’t able to recover. We obviously had to come to pit road, and we got way back in traffic and had to come back through and finished third, but, you know, that’s not what we’re here for. We want to win these races when I’m in them. I only get seven chances, so got to thank NOS Energy Drink and all the guys at Joe Gibbs Racing. Wish we were better than that tonight. Glad Christopher got a win. Those guys needed that and keep their chances better for their championship here this year.”

Daniel Hemric finished second and Allgaier was fourth after leading 32 of the final 50 laps.

John Hunter Nemechek was up front at the end of the second 45-lap stage after taking the lead from Busch on lap 80. Busch, though, got back up front for the restart at the beginning of the final 110-lap stage after getting off pit road first during the caution between the two stages.

Nemechek finished seventh after leading 14 laps. He went nearly two laps down after shutting his car off during a caution in an effort to conserve fuel when it wouldn’t re-fire. His car eventually restarted, and during a lap 162 caution, he got back on the lead lap.

UP NEXT: The Xfinity Series returns to a typical Saturday afternoon schedule when it travels to New Hampshire Motor Speedway in Loudon to race on the one-mile track on July 21. The Loudon race will be a companion event to a Monster Energy NASCAR Cup Series race there the following day. Kyle Busch is the defending winner at NHMS as the victor of the last two Xfinity Series races there. He has won six times at the track since 2009.