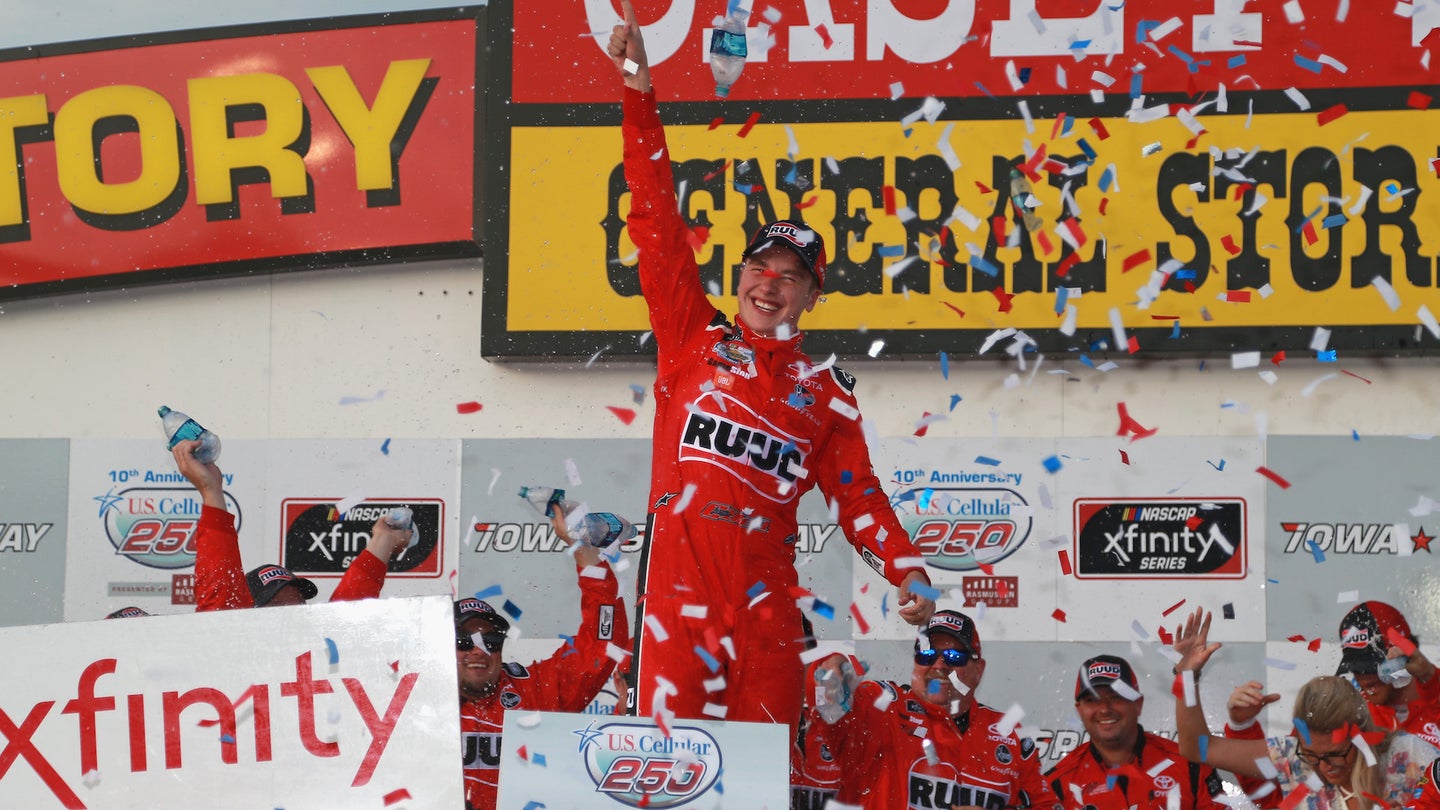 Christopher Bell claimed his third-consecutive NASCAR Xfinity Series win Saturday when he took the checkered flag in the US Cellular 250 at Iowa Speedway in Newton.

“It’s pretty cool, man,” Bell said. “I’m just kind of speechless. These races are really hard to win. Growing up sprint car racing and midget racing, you don’t have long races like this, and it’s been really difficult for me to wrap my head around how to run these long-distance races, and thankfully, with the great people behind me like Jason [Ratcliff, crew chief] and our spotter Tony Hirschman, who wasn’t here with us, but I had another great spotter Al on top of the roof today. Those guys take good care of me and make sure I keep my head on for all 250.”

Bell led 94 laps but his latest win came with a last-lap pass on June’s Iowa Speedway winner, Justin Allgaier. Allgaier took his first and only lead of the race on a Lap-250 restart and led six laps, mostly under caution after a 17-minute red flag for clean-up after an incident between Matt Tifft and Max Tullman.

“I let one get away on me, but this thing was just so good I was able to come from the second row and get there,” Bell said.

The final two cautions, the fifth and sixth of the afternoon, sent the race into overtime, extending it from a scheduled 250 laps to 257 laps. Cole Custer led a race-high 104 laps of that distance before finishing ninth as a result of contact with the wall and a trip to the pits for repairs during the second-to-last caution that came out on Lap 243 for a Garrett Smithley spin.

Custer and Bell were the two stage winners. Custer took the lead from pole sitter Elliott Sadler on Lap 27 and was still up front when the first stage ended on Lap 60. Custer and Sadler both led early in the second stage before Bell took his first lead, making him only the third leader of the race, on Lap 116.

After leading early, Sadler was sixth at the finish.

Custer and Bell led most of the 130 laps that made up the third and final stage of the race, except for laps during a cycle of green-flag pit stops that began on Lap 173 and didn’t include until fewer than 50 laps remained.

“I’ll tell you what, that long run there early in the race the 00 [Custer] was kind of able to get out on me and we were really equal, but I thought he might have been a little bit better,” Bell said. “My crew chief Jason [Ratcliff] just kept making the car better and better and better and just praying for no yellow there on that long green-flag run, and then, it came it just came time to execute on restarts.”

UP NEXT: The next test for the Xfinity Series will be at a road course as it travels to Watkins Glen, N.Y., to make left and right turns at Watkins Glen International on August 4. The WGI race will be the first of two-consecutive and three in four race weekends for the series. The Watkins Glen event will be a companion race to the Monster Energy NASCAR Cup Series. Kyle Busch is the defending winner of the Xfinity Series race at The Glen.