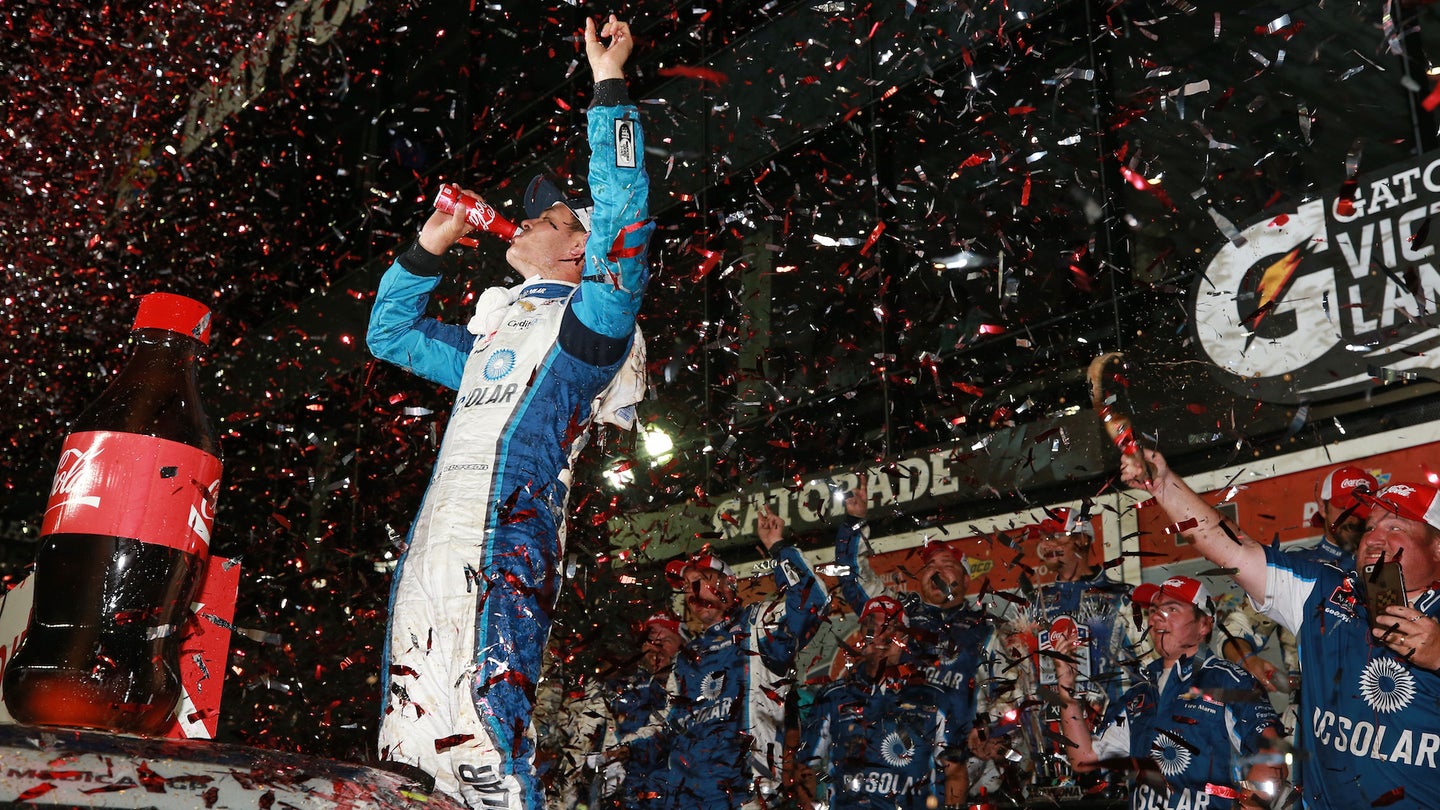 Kyle Larson wasn't the first to take the checkered flag at Friday night's NASCAR Xfinity Series race at Daytona, but he became the race winner anyway.

Justin Haley was thought to take the W at first, but as a result of an untimely penalty, he was stripped of what would've been his first win in just his second-career Xfinity race. NASCAR declared he went below the double yellow lines to improve his position as the race field approached the start/finish line, a no-no at the restrictor-plate tracks of Daytona and Talladega Superspeedway. As a result, NASCAR put Haley 18th at the finish, the final driver on the lead lap.

Larson was declared the winner as he was a close second behind Haley. It was Larson’s second-consecutive series win, adding to his victory the previous weekend at Chicagoland Speedway. Larson led 39 laps, tying him with Ryan Blaney for the most in what was scheduled to be a 100-lap event but was extended to 105 by a late-race caution. Larson also won both of the two stages which included the first 60 laps of the race.

“It’s amazing,” Larson said. “I’ve been close to win an Xfinity race here in Daytona, so it’s nice to finally get it done.”

Elliott Sadler, still winless at Daytona, finished second for the sixth time there, his third consecutive P2 finish at the track. He led 17 laps in the final quarter of the race, making him the only driver other than Larson and Blaney to post double-digits in the laps-led category.

“I felt like I was in a good spot there at the end beside Larson,” Sadler said. “It just wasn’t meant to be.”

The eventual race winner took his first stage victory after taking the race lead from Cole Custer on lap nine and running up front the remainder of the contest. Ryan Preece started from the pole after rain forced the cancellation of qualifying, but he failed to lead a lap before retiring from the race with a blown engine at the halfway point.

Blaney led most of the second stage after getting off pit road first with a fuel-only stop during the yellow flag at the end of the first stage, but on lap 58, he relinquished the position to Larson. Blaney got the lead again at the start of the third and final stage with a two-tire pit stop and ran up front until Sadler began his late-race charge.

The first two stages ran under green flag conditions, save for the caution periods in between. The yellow flag, though, was displayed four times during the third stage, all in the final 30 laps of the scheduled distance. A fourth caution on lap 82 for a multi-car crash led to a 12-minute red flag for track clean-up after Austin Cindric barrel-rolled three times and nearly landed on the car driven by Joey Gase after contact with Tyler Reddick. Several other cars were also collected.

“Definitely the biggest wreck I’ve ever had,” Cindric said.

Another crash involving at least seven cars, including Custer’s, brought out the yellow flag for the sixth and final time on lap 98.

Christopher Bell finished third after overcoming a spin and a pit-road penalty. Blaney was fourth, and Kaz Grala rounded out the top-five after starting the race near the back and suffering a flat tire.

“This race was really wild at the end,” Grala said. “We were running eighth during the second-to-last caution, but I actually got a flat right-rear tire coming to the green. I had to pit as the field took the green, but luckily, we got a caution shortly after that. You know it's going to be hectic on an overtime attempt in any plate race, and I knew I wasn’t gonna lift, so I just stayed in line and got as many positions as I could, ultimately racing up to fifth. Getting a top-five finish was really satisfying. This is our first top five with Fury Race Cars, but I feel like we’ve had speed all along since we became the No. 61 team, so this was a long time coming.”

Up next: The Xfinity Series goes night racing for the second-consecutive weekend, this time around with a July 13 date at Kentucky Speedway. Tyler Reddick is the defending winner.