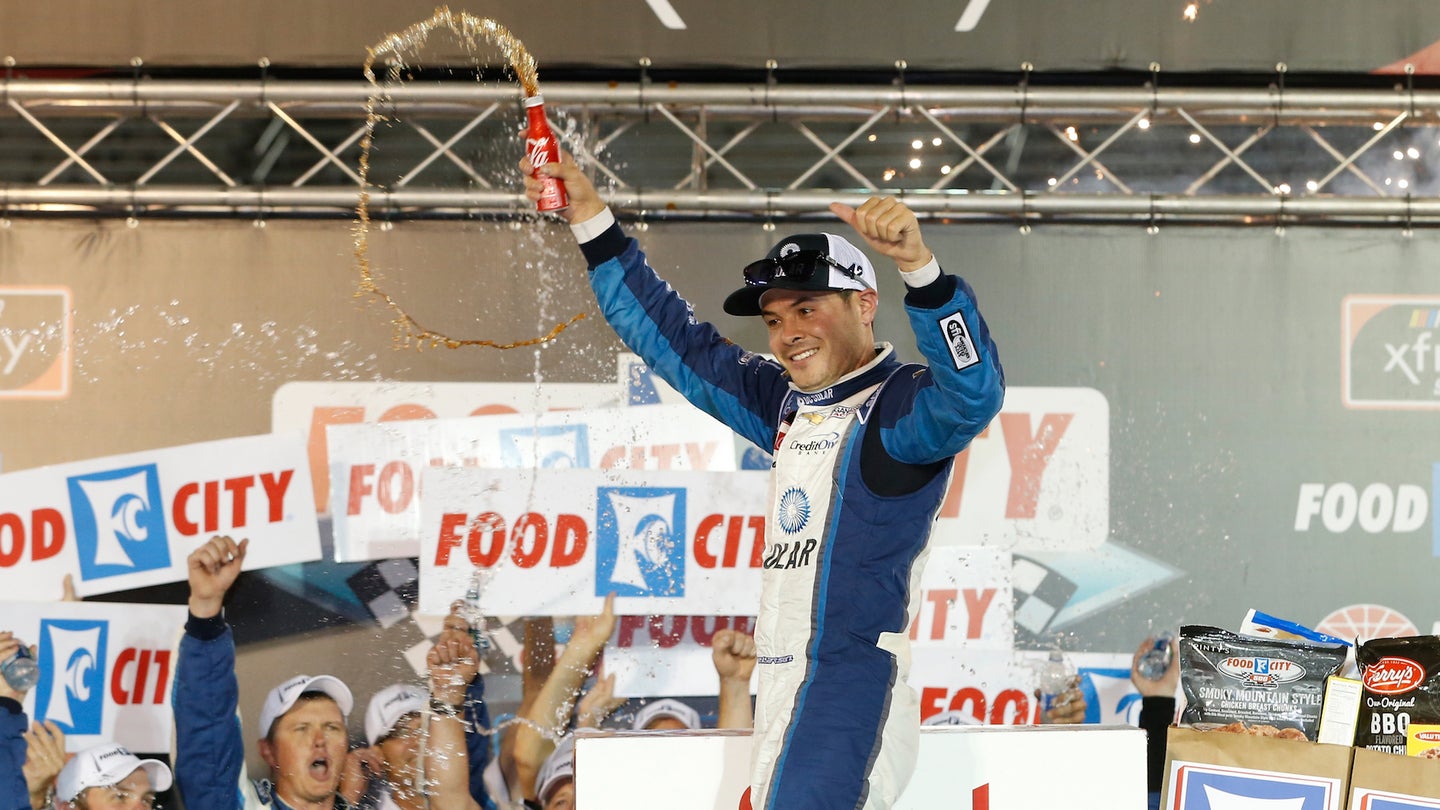 Kyle Larson dominated the Food City 300 NASCAR Xfinity Series race at Bristol Motor Speedway in Tennessee on Saturday night, leading 202 of the 300 laps that made up the race on his way to the win. It was his fourth win in six Xfinity Series races this year but his first at Bristol after three second-place finishes and no worse than fifth there in six-career series starts there.

Kyle Busch dominated the race early, starting on the pole and leading the first 69 laps. But Busch went from first to out when contact with the retaining wall on Lap 70 caused a broken A-arm and retirement from the race. He was credited with a 36th-place finish.

“Just rubber on top of rubber,” Busch said. “The rubber build up that was happening, I just got into the corner a little too hot and just got up into the fence a little bit, and then. I don’t know, two or three laps later. it blew out.”

Cole Custer inherited the lead from Busch’s misfortune, but on a Lap 80 restart, Larson took his first lead. He went on to win both 85-lap stages.

“It feels really good,” Larson said. “I wish Kyle Busch wouldn’t have had his troubles so I could have raced him, but it still feels very, very cool.”

Elliott Sadler led laps through pit strategy early in the third and final stage of the race, and Christopher Bell led 18 laps before Larson regained the lead on lap 204.

Bell challenged Larson closely for the lead in the final 100 laps but was fourth in the running order for an overtime restart following the eighth caution of the race. He was able to get back up to second by the checkered flag for runner-up honors.

“I was smiling inside my helmet so big,” Bell said. “This is the first time I’ve gotten to run the real Bristol where the top rubbers in and you get going around there pretty good. That was the most fun I’ve had in a stock car, man. I love lapped traffic, and Kyle loves lapped traffic, too. We grew up racing without spotters where lapped traffic was a huge factor of the race, and then, you go to 90 percent of the NASCAR tracks that are big enough and spotters have enough time to communicate, and they just kind of get the lapped cars out of your way. Here at Bristol, that’s not the case; you have to navigate the lapped traffic, and that’s what makes this place really fun.”

UP NEXT: After a week on the short track of Bristol Motor Speedway, the NASCAR Xfinity Series returns to road-course action for the third time in four race weekends with an August 25 date with Road America in Elkhart Lake, Wisconsin. Four races remain in the 2018 Xfinity Series regular season, counting the Road America race. Jeremy Clements is the defending winner of the race as the result of a surprise career-first win a year ago. He’s the only current series regular with a Road America win to his credit.