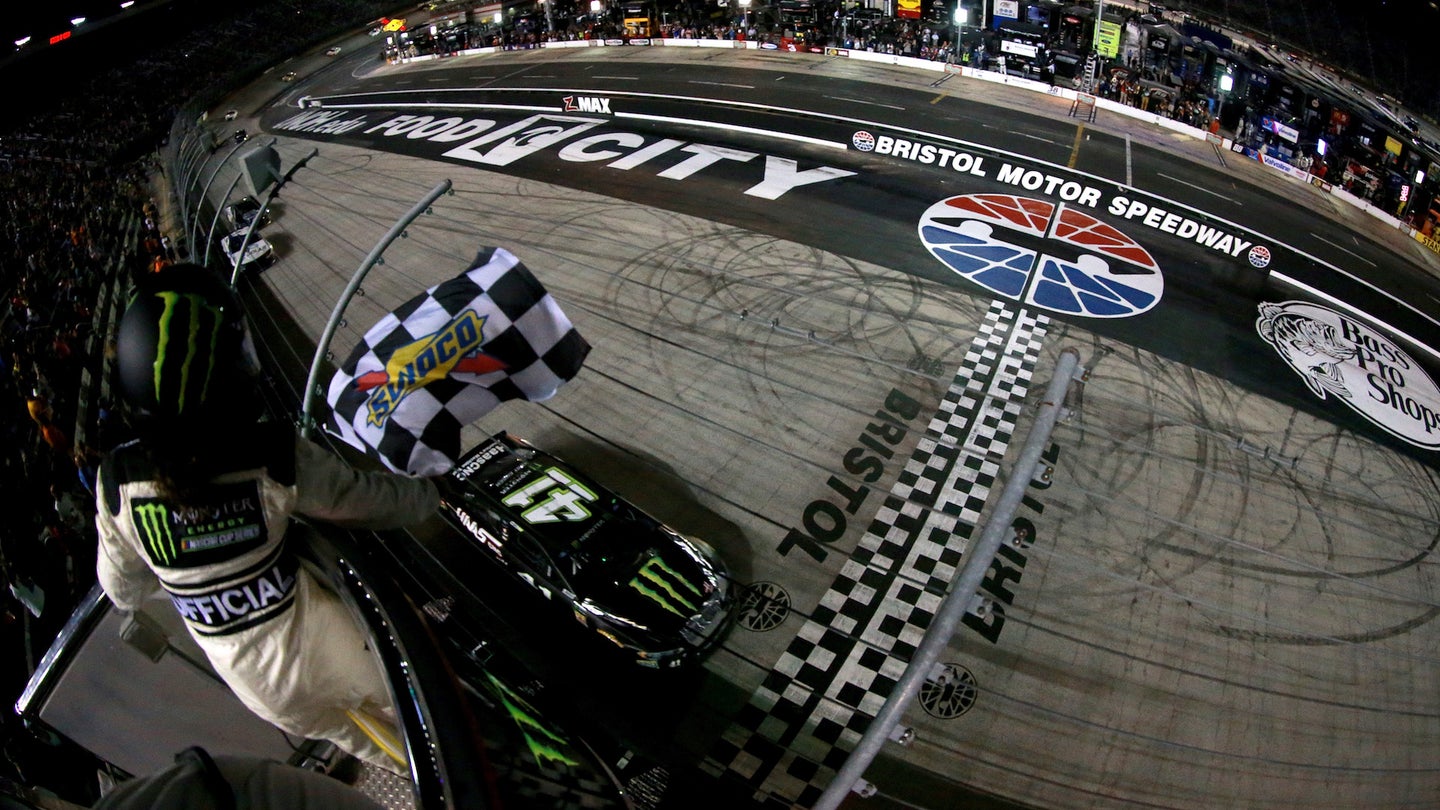 Kurt Busch claimed his sixth-career Monster Energy NASCAR Cup Series win at the Bristol Motor Speedway short track on Saturday night. His triumph at the Bass Pro Shops NRA Night Race was his first victory of 2018 which snapped a 58-race winless streak, dating back to the 2017 season-opening Daytona 500.

“It’s awesome to do it at Bristol,” Busch said. “I love this place. We now have won six times here, and I have great teams that have always helped me win. This group of guys, Billy Scott, my crew chief, this is his first win, and to be able to do it with Ford and Monster and Haas Automation is just what it’s all about is executing as a team, and we had good restarts when we had to, and then, you’ve got to get clever and start throwing everything at it.”

Pole sitter Kyle Larson took runner-up honors after leading laps early and getting back up to second on the final restart with 13 laps remaining.

“I think if I had a better car, tires probably would have showed what they are really capable of,” Larson said. “This was just a really frustrating day. Our DC Solar Chevy was not very good from Lap 1 to Lap 500, there, but we fought and got a second-place finish out of it, so I was happy about running second but just disappointed because I had a lot of confidence going into this race and thought our car was really good. But we were probably a 12th to 15th-place car, I thought. Just lined up in the right restarts just about every time and was able to gain some spots on every restart and maintain and then would be terrible there towards the end of the run. Frustrating, but we were able to fight, so that’s good for our team to be able to do that. Our pit stops, aside from the first one, were really good, so I’m happy about that. So we’ll just continue to fight to get our cars a lot better.”

Clint Bowyer got off pit road first during a Lap 351 caution and was joined up front by Stewart-Haas Racing teammate Busch when the latter took second on a Lap 447 restart. Busch then took the lead from his teammate on the next restart that followed a Lap 472 yellow flag.

“It was up to Bowyer to choose the lane,” Busch said. ”He chose the outside, and we got a perfect start on the inside. I dug it perfect right into turn one and two and the spotter said, ‘Take it. Take it,’ which meant go to the wall on exit, and I didn’t even bother to look in the mirror. He said, ‘Take it,’ and when you trust your team to give you the right stuff setup-wise, you’ve got to trust the spotter the same way. Tony Raines—he’s a racer. That’s why he’s my spotter, and it worked out perfect.”

Bowyer drifted back to sixth by the checkered flag after leading 120 laps.

Ryan Blaney and Joey Logano were stage winners, with Blaney running up front at Lap 125 for the Stage 1 win and Logano being the leader when Stage 2 ended at Lap 250, the halfway point of the race.

Blaney took his first lead on Lap 17. He was second off pit road during a Lap 60 competition caution, but Ricky Stenhouse Jr., the first driver out of the pits, was nabbed for speeding on pit road, turning the lead over to Blaney.

Blaney finished seventh after leading a race-high 121 laps of the 500-lap race.

Chase Elliott led laps early in the second stage after Blaney lost the top spot on pit road, but on Lap 194, Blaney reclaimed his position at the front. Logano took his stage-winning lead by getting out of the pits first during a caution just before Lap 200.

The three drivers who have combined to dominate the 2018 season, so far—Kyle Busch, Kevin Harvick and Martin Truex Jr.—all struggled. Busch’s struggles began near the start of the race when he was involved in a multi-lap crash on Lap 3. He wound up two laps down.

Harvick, after running in the top-five throughout the first third of the race, went two laps down when he pitted for a vibration on Lap 185. He was running second when he headed for the pits.

Harvick and Kyle Busch each got one of their laps back by staying out and taking the wave-around during a Lap 197 caution. Busch then got back on the lead lap, courtesy of the free pass during the caution at the end of the second stage. Prior to the conclusion of Stage 2, Harvick and Busch battled on the track to be the first one lap down for the pass.

Truex was passed by Blaney and went a lap down on Lap 117, but he eventually got back on the lead lap.

After their recoveries, Truex was up to second and Busch third on Lap 413, but contract from Busch sent Truex into a spin and into the wall. Truex retired from the race, damage to Busch’s car hindered his crew’s efforts to fuel his car.

“Oh, man, it was so light. Just misjudged it by six inches, maybe less,” Busch told his team over the radio.

Kyle Busch’s car looked to be overheating on pit road after the incident. He continued and spun with a flat tire on Lap 481.

Harvick wound up the highest finisher of the three in 10th after eventually getting back on the lead lap.

UP NEXT: After a weekend off, the NASCAR Cup Series heads to Darlington Raceway in South Carolina for the September 2 running of the Southern 500, the second-to-last race of the 2018 regular season. The historic race, complete with retro paint schemes and uniforms, was won last year by Denny Hamlin, who is still searching for his first win of the season.