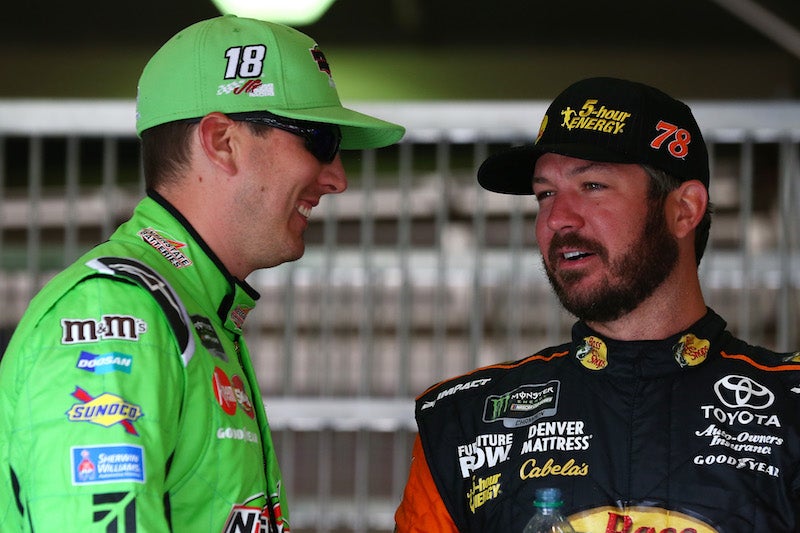 Kyle Busch had a rough night at Bristol Motor Speedway in Tennessee Aug. 18. He was part of a multi-car crash on lap three, battled from two laps down to get back on the lead lap and made contact with Martin Truex Jr.while racing for second on lap 432. Fewer than 50 laps later, Busch spun as a result of a flat tire. His night didn’t get better after the race, either. Instead, he was confronted by an irate fan, both physically and verbally.

After the incident, Bristol Motor Speedway released the following statement:

“Our security team has investigated a post-race incident where a guest repeatedly confronted Kyle Busch verbally and physically while he was signing autographs for fans. As Busch then prepared to leave in his golf cart, the individual struck the driver across the chest, and at that time, Busch confronted the individual. The two were separated quickly and a uniformed officer pulled the individual to the side, allowing Busch to depart.”

A fan video surfaced soon after the altercation.

No arrests were made, according to the Sullivan County, Tennessee, Sheriff’s Department and the Bristol Police Department. A NASCAR spokesperson confirmed that someone from the racing sanctioning body discussed the incident with police. No penalties for Busch were listed on NASCAR’s weekly penalty report that was released Wednesday.

"Bristol Motor Speedway appreciates the fan accessibility provided by NASCAR drivers, and we will work to ensure that fans and drivers continue to have great experiences together at BMS,” the statement from BMS also read.

After the incident with Truex, Busch also was the subject of ire on social media, and not just from race fans. Truex’s longtime girlfriend, Sherry Pollex, chimed in with her thought via Twitter:

Busch wound up with a 20th-place race finish. After the race, he accepted blame for the incident with Truex.

“Totally my fault, man, I feel terrible about that,” Busch said. "Obviously I just misjudged it by a little bit – four inches, six inches, whatever and I got in the gas and was coming up off the corner and was going to slide in behind him, and I didn’t think I was next to him yet, and I clipped him and sent him for a whale of a ride. Hopefully, he’s alright and everything is okay there. I hated that I clipped him. I know he could have had a good shot to win the race too.”

The incident retired Truex from the race, resulting in a finish of 30th.