With his win of the Gander Outdoors 400 on Sunday, Kyle Busch matched Kevin Harvick in 2018 NASCAR wins with six. 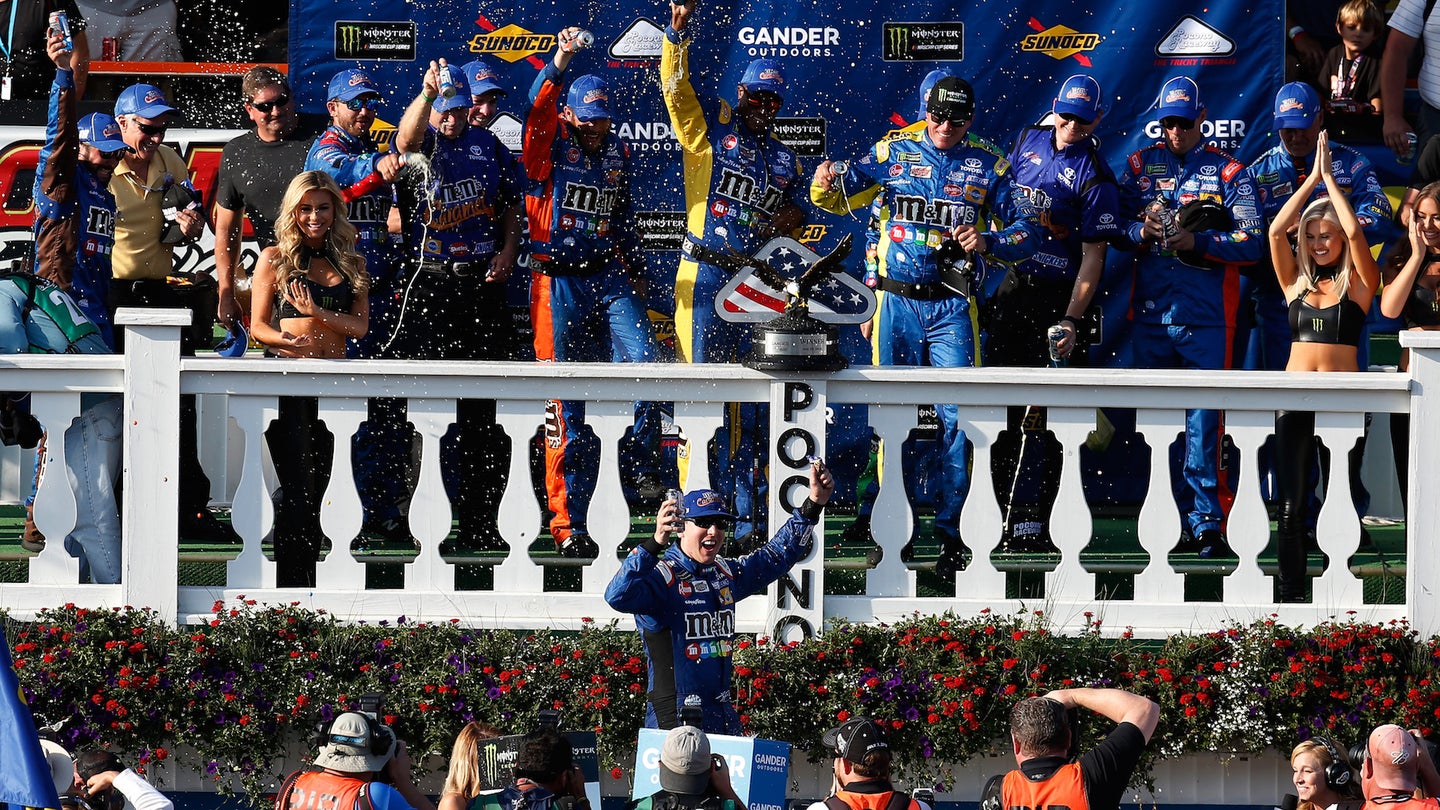 Kyle Busch matched Kevin Harvick with his sixth Monster Energy NASCAR Cup Series win of the 2018 season Sunday in the Gander Outdoors 400 at Pocono Raceway. He did so after starting from the back of the grid despite posting the second-fastest qualifying lap on Saturday, when his car was one of 13 to fail post-qualifying inspection.

"What an awesome race," Busch said. "My Toyota Camry was awesome. Had a lot of speed, but man, we fought it all weekend."

Harvick’s car also failed inspection Saturday after being the fastest in qualifying, so, like Busch, he started much farther back. Harvick, Busch and several of the others with qualifying inspection issues worked their ways toward the front, but Harvick was the first to do so. He was inside the top-10 of the running order by Lap 10, and by the end of the first stage on Lap 50, he was up to second.

Harvick took his first lead on Lap 65 and won the second 50-lap stage, but he was nearly back to where he started the race after two pit stops during a caution just past Lap 120 and another pit stop during the final caution with 35 laps to go. As a result of the extra stops, he restarted in 27th.

By that time, Busch was up front. He took his first lead with just under 50 laps remaining and maintained that lead for the remainder of the race.

Chase Elliott was the winner of the opening stage after taking the lead from Denny Hamlin on Lap 40. Previously, Joe Gibbs Racing teammates Daniel Suarez and Denny Hamlin combined to lead most of the opening laps after sharing the front row of the starting grid. Suarez finished the race in the second position to give Joe Gibbs Racing the one-two and claim his career-best finish to date.

"I thought we were a solid top-three car," Suarez said. "I felt like in the short run, we were actually the best car. I was better than the 18 [Busch]. It's a little disappointing."

“We really struggled all week,” Bowman said. “But then, the boss man [team owner Rick Hendrick] showed up and, magically, we got better today. Really glad for Axalta and to have the Eagles on the car in Pocono close to Philly is pretty special. Wish we wouldn’t have got such a bad last restart. Kyle said to wait for a hand out the window and the hand never came, so he kind of snookered me there, but it’s all good. I’m just glad we are kind of headed in the right direction.”

The yellow flag waved seven times throughout the race, with the second-to-last caution coming with about six laps remaining in the scheduled distance when Darrell Wallace Jr. experienced a brake failure that sent him hard into the wall. Wallace walked under his own power from his wrecked race car to an ambulance slowly with a slight limp. The race was red-flagged for several minutes to allow track clean-up and for personnel to remove debris from the track’s SAFER barrier.

Spins by Ricky Stenhouse Jr. and Aric Almirola on Lap 150 sent the race into overtime. By that time, Harvick was sixth in the running order for the final restart with two laps remaining. He got up to fourth by the checkered flag.

“It was eventful,” Harvick said. “I think we went to the back twice and made our way back to the front each time. We made a good race out of it, but it is hard to swallow on a day like that when our Mobil 1 Ford was the class of the field. You never know what is going to happen on these days. It is hard to put them together, and you win some and lose some.”

UP NEXT: Only five races remain in the 2018 Monster Energy NASCAR Cup Series regular season with Watkins Glen International in New York up next on August 5. It’s the second road-course race of the season and the 22nd race overall of the 36-race season. Reigning series champion Martin Truex Jr. won at Watkins Glen last year.