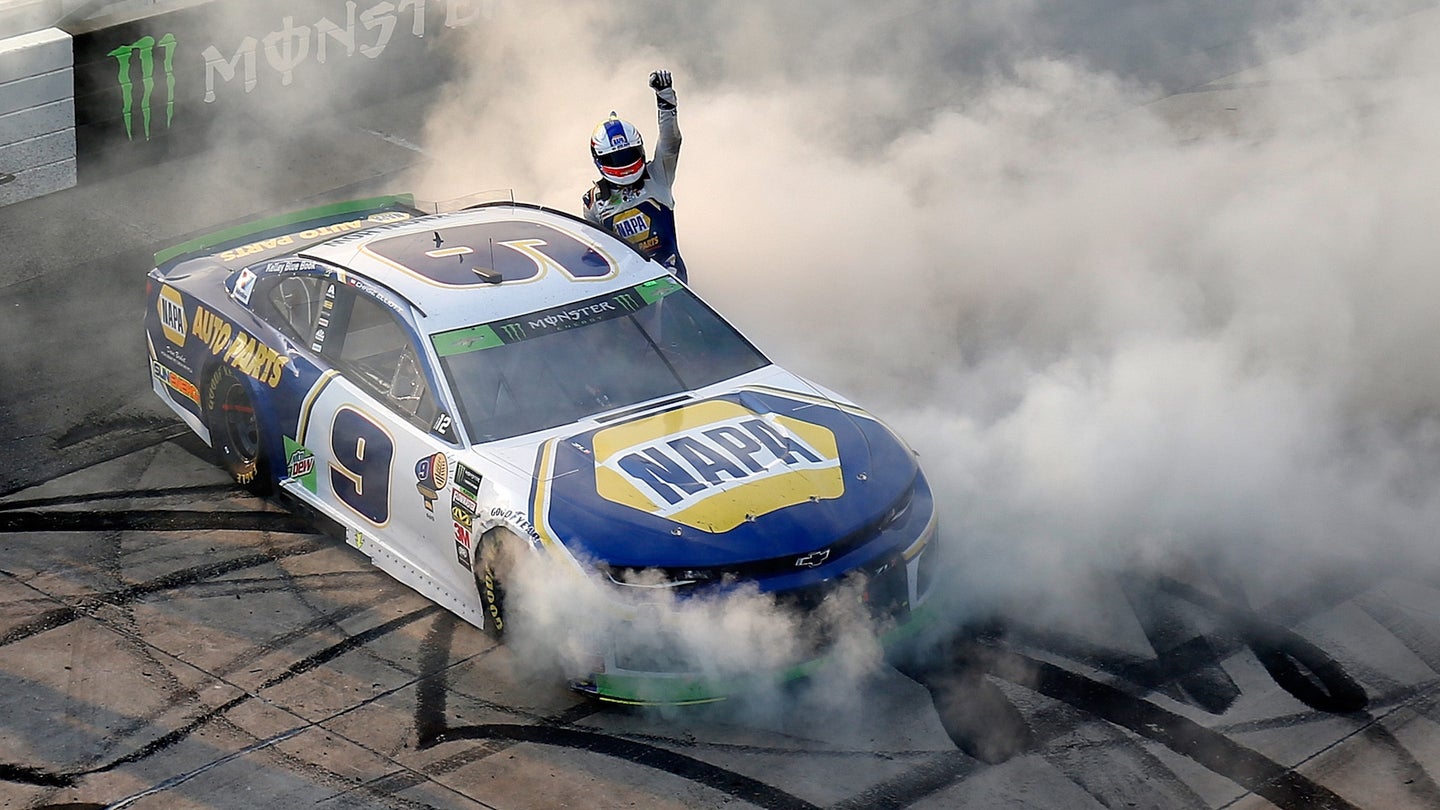 Chase Elliott claimed his second win of the 2018 Monster Energy NASCAR Cup Series season and his second-career series win Sunday in the Gander Outdoors 400 at Dover International Speedway. With the win, Elliott secured a spot in the third round of the playoffs, set to begin after races at Talladega Superspeedway and Kansas Speedway.

Elliott took the lead late in the race when he stayed out during a caution on Lap 392 when Clint Bowyer hit the wall. He held his position on an additional restart that sent the race into overtime after previous frontrunners Aric Almirola and Brad Keselowski got together and collected the cars of Alex Bowman and Martin Truex Jr.

Elliott was penalized for an uncontrolled tire on pit road after the first stage ended on Lap 120.

Kevin Harvick dominated the race after taking the lead from polesitter Kyle Busch on Lap 16. He won both stages that made up the first 240 laps of the race which was scheduled for 400 laps, but Harvick was forced into an extra pit stop as a result of a lug nut knocking the valve off his left-rear tire during a Lap 322 green-flag pit stop. Harvick fell off the lead lap but was the beneficiary of the free pass during a Lap 338 debris caution, placing him back with the frontrunners.

Harvick got back up to sixth by the checkered flag.

Kyle Busch struggled throughout the race after losing his early lead to Harvick. His problems were compounded by a pit road speeding penalty simultaneous to Harvick’s woes. The polesitter wound up eighth at the finish.

“Our day was not very good,” Busch said. “Speeding on pit road took us out of the running for a top-10 and a solid finish. We got about what we deserved, I guess.”

When Harvick’s domination was over, his Stewart-Haas Racing teammate Almirola took over up front. The four-car SHR team was collectively strong throughout the race, at one point holding all top four positions in the running order. In the end, though, Kurt Busch was the only SHR driver and one of only a few playoff competitors to not have some kind of struggle late in the race. He finished fifth. SHR drivers Almirola and Bowyer finished 13th and 35th, respectively.

Denny Hamlin finished second to Elliott, a week after being eliminated from the playoffs.

“We ran a 23.70 on that last lap. On older tires, that’s amazing,” Hamlin said. “I ran as hard as I could through 1 and 2. Then, through 3 and 4, I couldn’t get beside him [Elliott] there. I am proud of the whole FedEx team. Definitely a good start in the right direction. We chipped away at it all day as we moved up through the field. This is where we deserved. I am proud of this finish, and we’ll move on to the next race.”

Hamlin’s Joe Gibbs Racing teammate Erik Jones also finished in the top-five a week after playoff elimination. He was fourth at Dover.

“We were about a ninth-place car all day. We had that big wreck and then, were restarting fourth. The Craftsman Camry was gifted a couple of spots, but we’ll take that,” Jones said. “We stayed in and fought hard all day. We ran the best we probably ran here at Dover. We’ll need to figure out what we need to do to get up there and battle for the win but definitely a few steps forward.”

UP NEXT: The second round of the 2018 NASCAR Cup Series Playoffs continues Oct. 14 at Talladega Superspeedway in Alabama. The contest will be the fourth and final restrictor-plate race of the year for the series and will be the headliner of a race weekend that also includes the NASCAR Camping World Truck Series. Team Penske has been in victory lane the last two Cup Series races at Talladega, with Joey Logano winning there in April and Brad Keselowski last November.