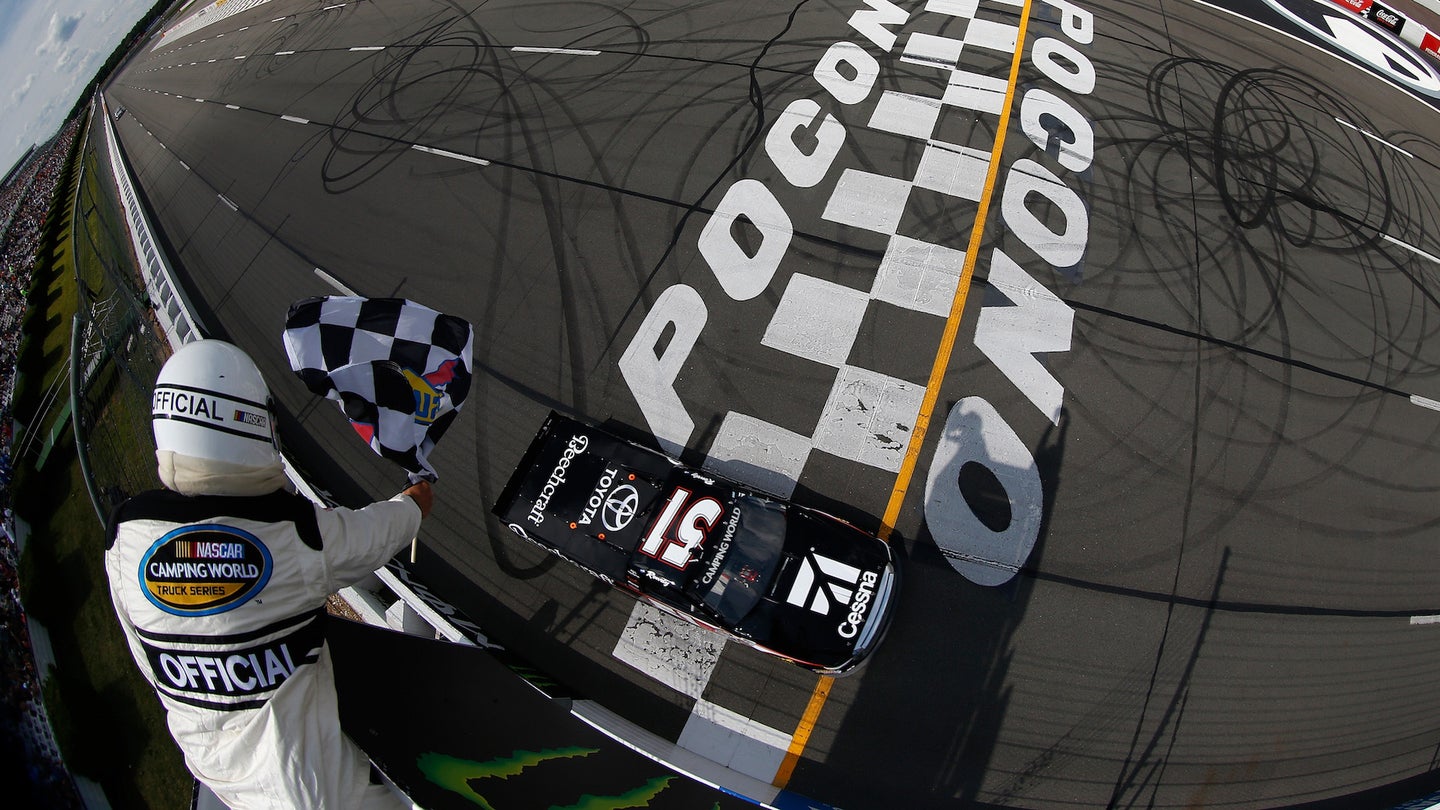 Kyle Busch is already the winningest driver in the NASCAR Xfinity Series. On Saturday, he grabbed a piece of that same status in the NASCAR Camping World Truck Series. He claimed his 51st-career Truck Series win when he took the checkered flag in the Gander Outdoors 150 at Pocono Raceway in Long Pond, Pennsylvania, tying him with Ron Hornaday for most wins in that series.

“It’s awesome,” Busch said. “I can’t say enough about everybody at Kyle Busch Motorsports and everybody that’s gotten these win totals to where they’re at, you know? Racing with Billy Ballew and racing KBM stuff, back in the heyday with—I don’t think I won a race with Morgan-Dollar, but I ran with those guys, you know? It’s a true testament to all the hard work and everybody, all the dedication and perseverance everybody has at Kyle Busch Motorsports to get me such a fast Cessna Beechcraft Tundra here. The guys at TRD [Toyota Racing Development] do an awesome job for us. Thanks to Toyota, Incredible Bank, Black Clover, DVX Eyewear, Rowdy Manufacturing. It’s a lot of hard work and a lot of great people and wouldn’t be here without them.”

The win at Pocono came down to a battle between Kyle Busch Motorsports teammates. Erik Jones, in a substitute role for the ill Noah Gragson, closed on Busch in the final 10 laps of the 60-lap race but was unable to pass his boss.

“They had a better truck than us here this weekend, the 18 [Jones] did,” Busch said. “We tried to fix this thing and work on it and make it better, but I probably made it slower in all the things that I changed on it rather than making it faster, but Rudy [Fugle, crew chief on the No. 18 team] and those guys are amazing. They do such a great job, and I knew Erik was going to be fast in that truck, and I knew Noah was going to be fast in that truck. They were the ones that we had to beat, you know?”

Jones started the 32-truck race in the back as a result of the driver change after Gragson fell ill and didn’t receive medical clearance to race, but he was up to fourth by the end of the first stage on Lap 15 and he took the lead from Busch on Lap 27.

Pit strategy put another KBM driver, Todd Gilliland, up front at the end of the opening stage when Busch gave up the lead to pit late in the stage. After pitting, Busch stayed out at stage end to reassume the lead.

Stewart Friesen won the second stage in the same manner. After taking the lead from Busch, Jones gave up the top spot to pit just before the second stage ended on Lap 30, handing the lead over to Friesen, who also started in the back after a tire change between qualifying and race time.

Busch retook a lead he never relinquished early in the 30-lap final stage. By race’s end, Busch was credited with leading 43 of the 60 laps that made up the race.

When Busch and Jones got up to the top-two spots in the final stage, they pulled away from the rest of the field. Busch beat Jones to the checkers by 1.4 seconds. Third-place finisher Dalton Sargeant was 17 seconds back.

UP NEXT: The Camping World Truck Series will take a weekend off before returning to action August 11 at Michigan International Speedway in Brooklyn for the second to last race of the series’ regular season. Darrell Wallace, who isn’t expected to be in the 2018 edition of the race, is the defending winner. Among current Truck Series regulars, Brett Moffitt is the most recent Michigan winner, getting to victory lane at the two-mile track in 2016.