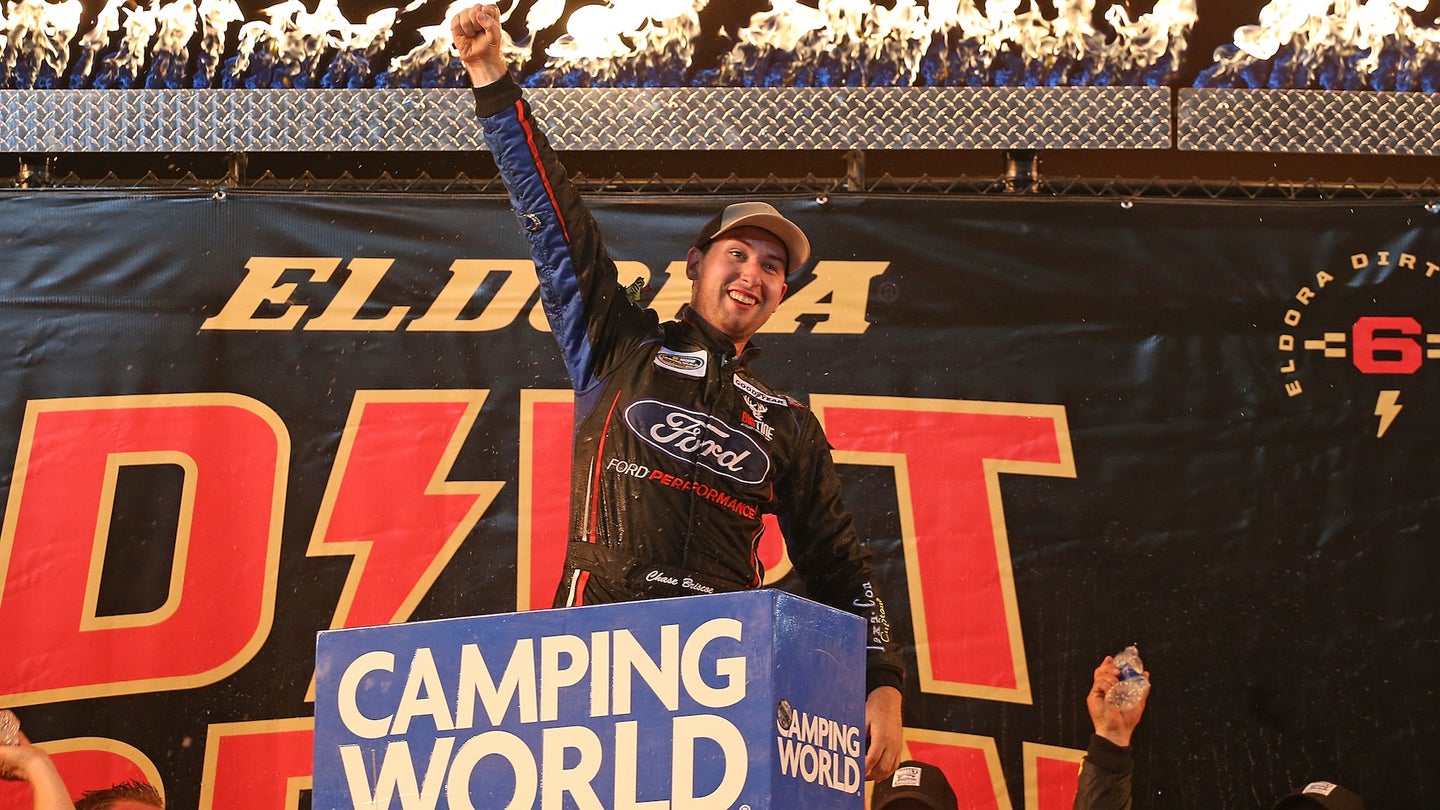 Chase Briscoe returned to the NASCAR Camping World Truck Series for the first time in 2018 Wednesday night to drive a fifth entry for ThorSport Racing in the Eldora Dirt Derby at Eldora Speedway in Rossburg, Ohio. He parlayed the return into a trip to victory lane after a side-by-side battle with teammate Grant Enfinger after an overtime restart.

"This is our Daytona for dirt guys,'' Briscoe said.

Enfinger took runner-up honors to give ThorSport a one-two finish in NASCAR’s only yearly national level race on dirt.

"He used me up and I was going for it,'' Enfinger said. "He didn't do anything dirty. Man, that close. By a bumper. We have a few more races until the playoffs. We've got to step it up.''

Briscoe led a race-high 54 laps, including 46 in the second stage of the race. Briscoe was the second-stage winner after leading 46 of the 50 laps that made up the stage.

Logan Seavey, in his first-career Truck Series start, led 53 laps after taking the lead through a pit strategy of staying out during the caution between the second and third stages of the race. Briscoe retook the lead on a restart following a lap 137 caution that came out on lap 137. Enfinger was up to second by the ninth and final yellow flag on lap 146 that sent the race into overtime.

Seavey’s series debut resulted in a top-10, an eighth-place finish.

Ben Rhodes, winner the previous week at Kentucky Speedway in Sparta, dominated earlier in the day, taking the pole in a single-truck qualifying session, winning the first of five qualifying races, and then, leading most of the opening stage. He led all but one lap of the opening 40-lap stage on his way to the stage win, but a few laps later, he hit the wall, fell off the pace, and headed to pit road for repairs.

Monster Energy NASCAR Cup Series veteran driver Ryan Newman returned to the Truck Series for the first time since 2015 to race on the Eldora dirt. Newman, though, was involved in a multi-truck crash on lap 54 that put him multiple laps down. As a result, he wound up with a 30th-place finish in the 32-truck race.

In addition to Rhodes, Todd Gilliland, Briscoe, Matt Crafton and Stewart Friesen were winners in the five 10-lap qualifying races. Noah Gragson won the 25-lap last-chance race that determined two of the final spots on the main event starting grid.