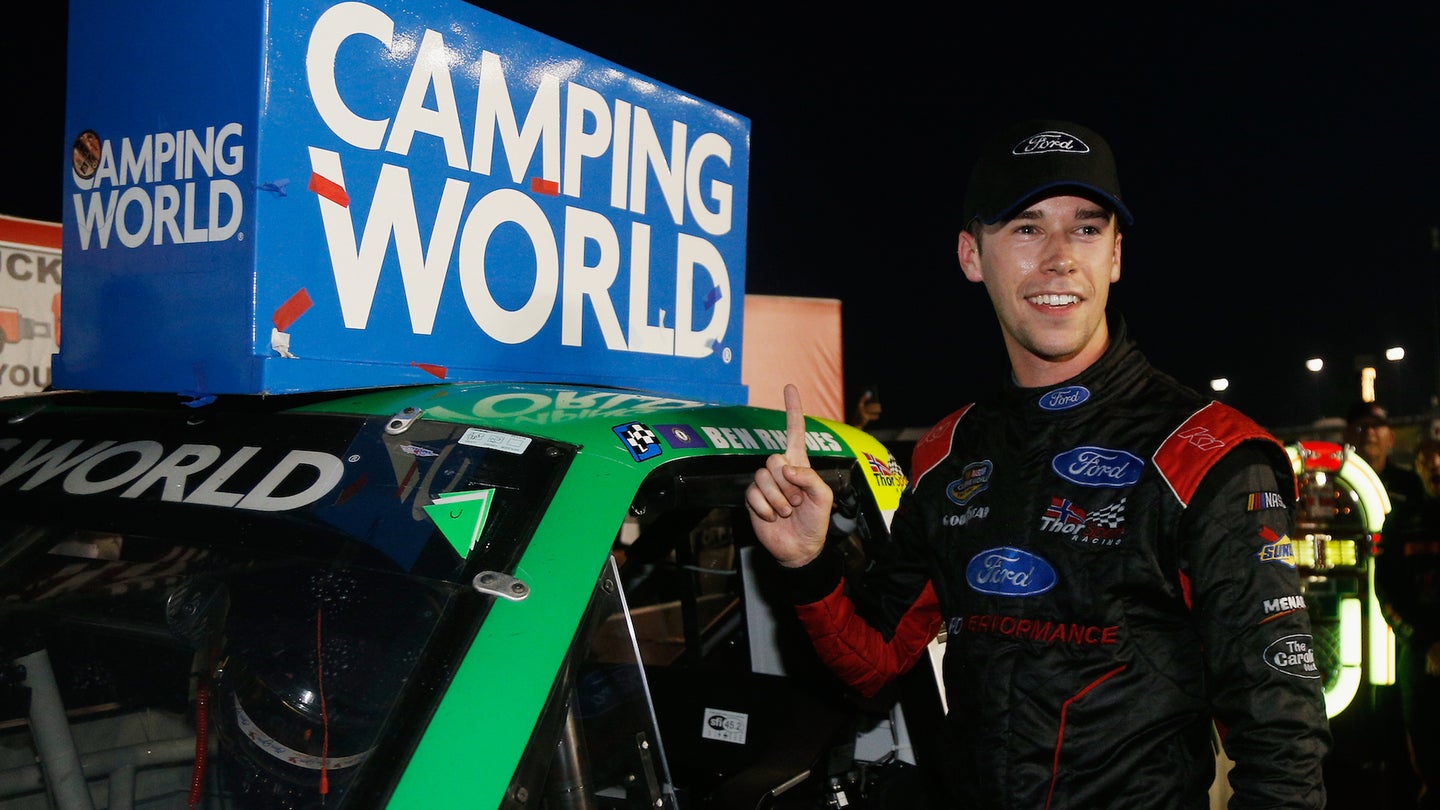 Kentucky native Ben Rhodes claimed his second-career NASCAR Camping World Truck Series win, his first of 2018, in his home state Thursday night when he took the checkered flag in the Buckle Up In Your Truck 225 at Kentucky Speedway in Sparta. He finished 0.9 seconds ahead of Stewart Friesen. The win snapped a 15-year Kentucky Speedway losing streak for Ford.

"This has been such a long time coming and these guys deserve it so much,” Rhodes said. "They've been working their butts off. We've had a touch of bad luck this year. Everybody was feeling good about it tonight. We've had trucks like this all year long, and we're finally able to showcase it. This is exactly what we needed.”

Friesen, the second-year Truck Series driver took his third-career runner-up finish, his second of the season, after starting the race in the back because of an engine change between qualifying and the race.

Matt Crafton finished third after also starting in the back. Brandon Jones was third, and John Hunter Nemechek rounded out the top-five. Rhodes and Jones were the only top-five finishers who didn’t start the race in the back. Like Friesen, Nemechek also started in the back because of an engine issue.

Cautions were relatively rare in Thursday night’s race. Aside from the two cautions that split the race into its three stages, the yellow flag waved only one other time: on the first lap when Tyler Matthews spun and made contact with the retaining wall. The limited cautions resulted in a new race record. Thursday night’s race was completed in 1 hour, 32 minutes and 4 seconds.

As a result of a caution-free final stage of 80 laps, the race field cycled through green-flag pit stops with less than 30 laps remaining. The Truck Series’ two-win leaders, Johnny Sauter and Brett Moffitt, had trouble on pit road under green. Sauter was nabbed speeding on pit road, and then, was penalized, again, for a commitment-line violation while serving the initial penalty. Moffitt had to make an extra pit stop when his left and right-side tires were swapped.

Friesen was the race leader prior to the green-flage stops, but with a fuel-only stop, Rhodes was ahead of him at the end of the pit cycle. He maintained that lead for the remaining distance.

Pole sitter Noah Gragson and Rhodes combined to lead the first 70 laps of the 150-lap race, with Gragson Rhodes leading at the end of the first 35-lap stage and Gragson the second. Gragson was up front for 59 of the first 70 laps, but Rhodes took the lead on lap 33 to take the opening stage win. Gragson, though, took the lead on a restart early in the second stage and continued his domination en route to the stage-two win.

After pit stops during the caution at the conclusion of the second stage, Rhodes was still in the top five, while Gragson restarted 13th after difficulty on a right-front tire change. Gragson was eighth at the checkered flag after leading a race-high 62 laps.

Parker Kligerman was the first driver other than Rhodes and Gragson to lead the race after a two-tire pit stop to restart the final stage. Friesen restarted second to Kligerman, and took the lead from him on lap 88. Kligerman fell back through the field over the course of the remaining laps and was outside the top-20 at the finish.

BUCKLE UP IN YOUR TRUCK 225 RESULTS:

UP NEXT: The break between races is short, as the Camping World Truck Series returns to action Wednesday at Eldora Speedway in Rossburg, Ohio, for the Eldora Dirt Derby. It’s the only dirt-track race of the year for a NASCAR national series. The 2018 edition of the race will be the sixth for the yearly event. Matt Crafton won at Eldora last year.