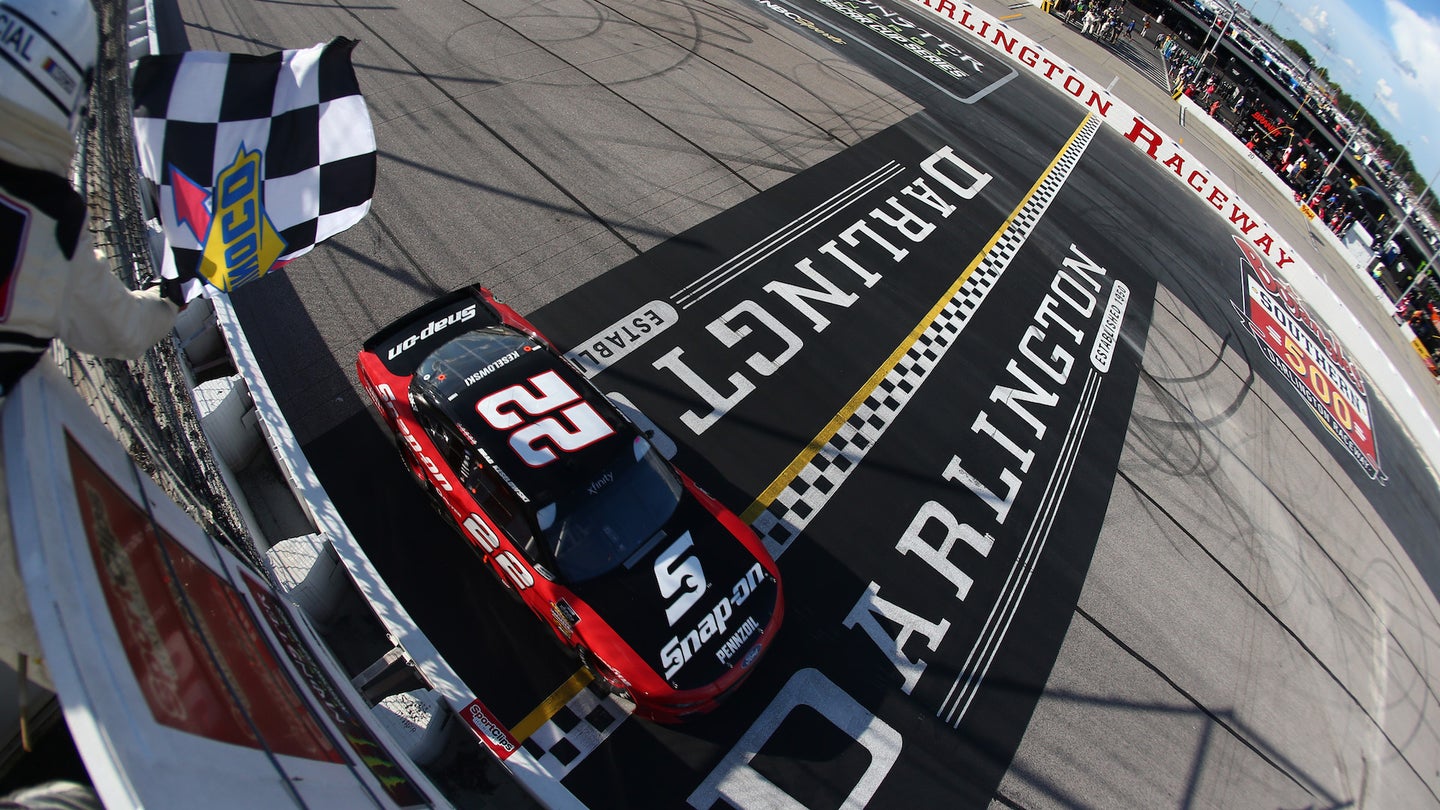 NASCAR Cup Series regular Brad Keselowski played the Xfinity Series spoiler this weekend by winning Saturday's contest at Darlington Raceway in South Carolina. The victory was Keselowski’s third in five Xfinity races this year, but it was Team Penske and Keselowski’s first series win at Darlington.

"We had a really great Ford Mustang today," Keselowski said. "I could keep up with Ross [Chastain], but I couldn't pass him; he was so fast. They [Chastain and Kevin Harvick] had their thing off [Turn] 2, and we were able to pounce on it. That's a testament to this team. I ran five races, and we won three of them. I really wanted to run this race, because I've never won here. Great car. We've had a lot of fun this year. I'm so proud to be a part of this team."

Keselowski was in position to inherit the race lead when Ross Chastain and Kevin Harvick wrecked for the top spot just past Lap 100 of the 147-lap race. Harvick retired from the race while Chastain continued, restarting in 23rd but pitting for a tire rub soon after the restart. He would finish 25th.

“I tried to stay as low as I could, and he just rode on my door,” Harvick said. ”That’s just a really inexperienced racer and a really bad move there, and got the air and got on beside me and just kept going up the race track. I couldn’t do anything with the wheel, so you’ve got a really inexperienced guy in a really fast car and made a really bad move and then wrecked me down the back straightaway and hooked me to the right. That’s probably the reason that he’ll never get to drive many of them again.”

Chastain, in his fourth full season of Xfinity Series competition, was making the best in his first of a three-race opportunity with Chip Ganassi Racing to drive its No. 42 Chevrolet. He claimed his first career pole and led 71 of the first 90 laps and won both of the two 45-lap stages in that span.

Chastain led the entire opening stage, bettering his career laps-led tally to that point—16 laps in 129 races, mostly as a driver for JD Motorsports.

Christopher Bell ran second to Chastain throughout the first stage, but Bell made an unscheduled pit stop under green for a flat left-front tire on Lap 55. He still suffered a tire rub, and on Lap 66, he retired from the race after hitting the retaining wall.

“I just got a little bit loose off (Turn) 4 and whenever I got loose off 4, I didn’t have enough time to correct it before we got on the straightaway and just tagged his (Daniel Hemric) right-rear corner there. Unfortunately, cut my left-front and had to come back and pit and it just ended our day.”

In the second stage, Chastain fended off Cup Series drivers Brad Keselowski, for whom he raced in the NASCAR Camping World Truck Series, and Harvick. Harvick got out of the pits ahead of Chastain to restart with the lead early in Stage 2. Chastain retook his lead on Lap 71.

Keselowski was one of two Cup Series regulars in the top-five of the finishing order. Denny Hamlin finished fourth after starting the race in P5 and driving back to the front after a pit-road penalty for leaving his pit box with a chassis wrench still attached to his car at the end of the first stage.

Cole Custer and Tyler Reddick were the highest-finishing Xfinity Series regulars in second and third. Series veteran Elliott Sadler rounded out the top-five.

UP NEXT: The Xfinity Series has two events remaining in its 26-race regular season, the first of those coming at Indianapolis Motor Speedway on Sept. 8. That race will be a companion event to the Sept. 9 Brickyard 400 for the Monster Energy NASCAR Cup Series. William Byron, who has since moved on to the Cup Series, is the defending Xfinity Series winner at Indianapolis. None of the current Xfinity Series regulars have wins at IMS to their credit. Kyle Busch won three of the previous six Xfinity races at the track.