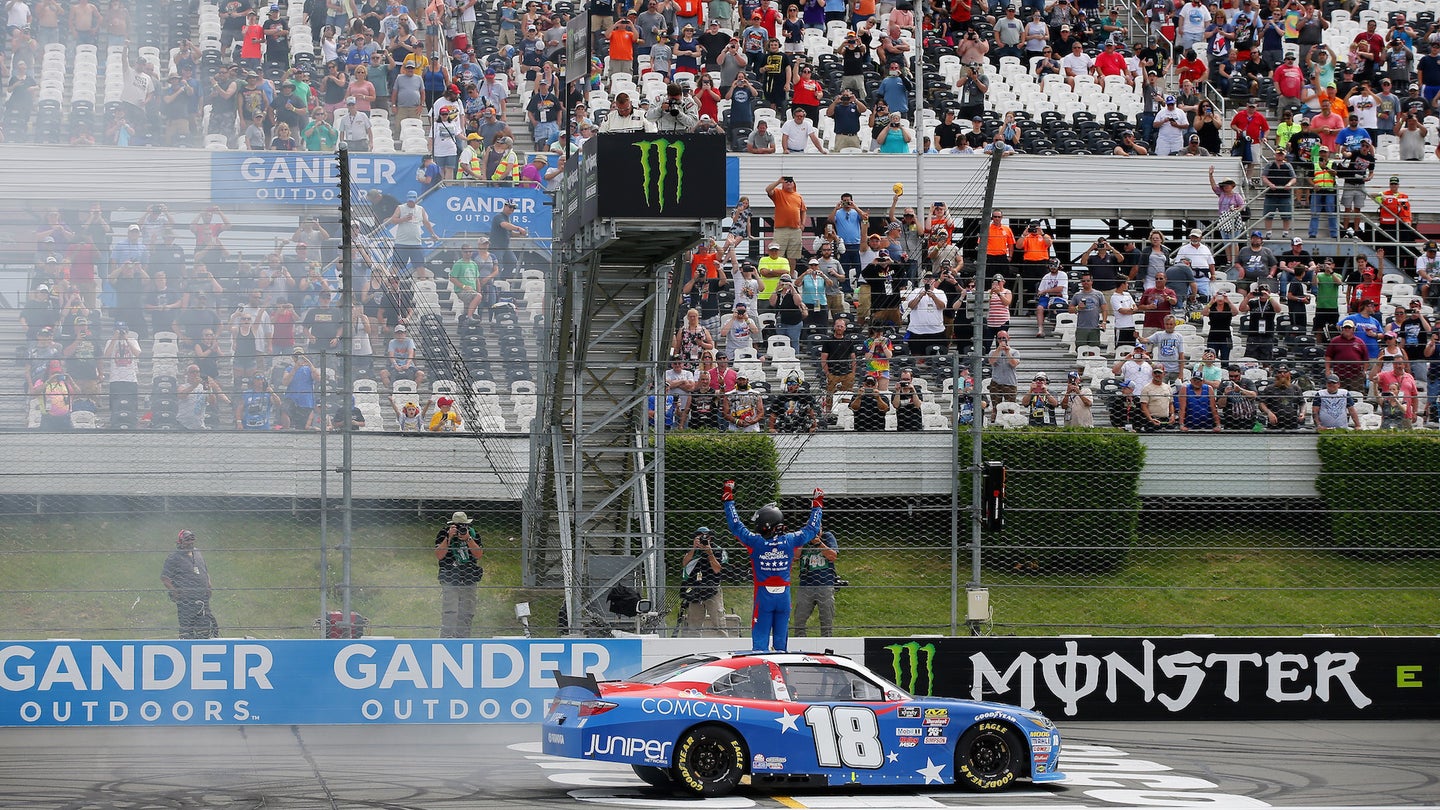 The 2018 Pocono Green 250 on Saturday was the third NASCAR Xfinity Series race at Pocno Raceway in Long Pond, Pennsylvania. And just as in the first two races, Saturday’s race was won by a Monster Energy NASCAR Cup Series driver, Kyle Busch. Busch led 64 laps of the 100-lap race, including the final 40, on his way to his first Xfinity Series win at the track, but his 92nd, overall, in the series.

“It feels good for as good as our car was,” Busch said. “I tried to screw it up again early this week. My guys are amazing. Joe Gibbs Racing and everybody back in the Xfinity Series. They do a great job in the body shop and chassis shop. This car was on rails this week and last week, too.”

Busch’s No. 18 Joe Gibbs Racing Toyota, though, failed post-race inspection. The car was too high in the left-front corner, resulting in it not meeting NASCAR’s post-race height requirements.  Penalties will be announced in the upcoming week.

Xfinity Series regular Cole Custer was the only other driver to lead more than five laps, running up front for 23. He finished fifth.

“We had a really fast Haas Automation Mustang," Custer said. “We just didn’t have really good long run speed; that was our biggest problem. We just got too tight at the end of a run. It was interesting to run the package and try to learn it throughout the day. I just think we needed a little more there. We were close.”

The aero package for the Pocono race included aero ducts, restrictor plates and a larger spoiler. It was the package the series ran last year at Indianapolis Motor Speedway and will run again next weekend at Michigan International Speedway.

Custer started on the pole but lost the lead to Busch on lap three. Busch then led the remainder of the opening 25-lap stage before a pit road speeding penalty during the caution between the two stages. As a result, Busch restarted the race outside the top-20 while Custer restarted with the lead after a pit strategy of pitting just before the end of the stage.

“We were able to overcome our speeding issue we had this weekend to get back to the front,” Busch said.

Custer then led most of the second 25-lap stage, but lost the lead to Paul Menard on lap 50, giving Menard the second-stage win.

Aside from the two cautions to divide the race into its three stages, the yellow flag waved three other times for a Michael Annett spin on lap 31, a Chase Briscoe incident on lap 57, and a Christopher Bell-Justin Allgaier wreck with 40 laps remaining.

Cole Custer Gets Another Shot at Top-Level NASCAR Racing