All this power comes courtesy of a massive V8. Oh, and don’t forget the 118-millimeter turbo. 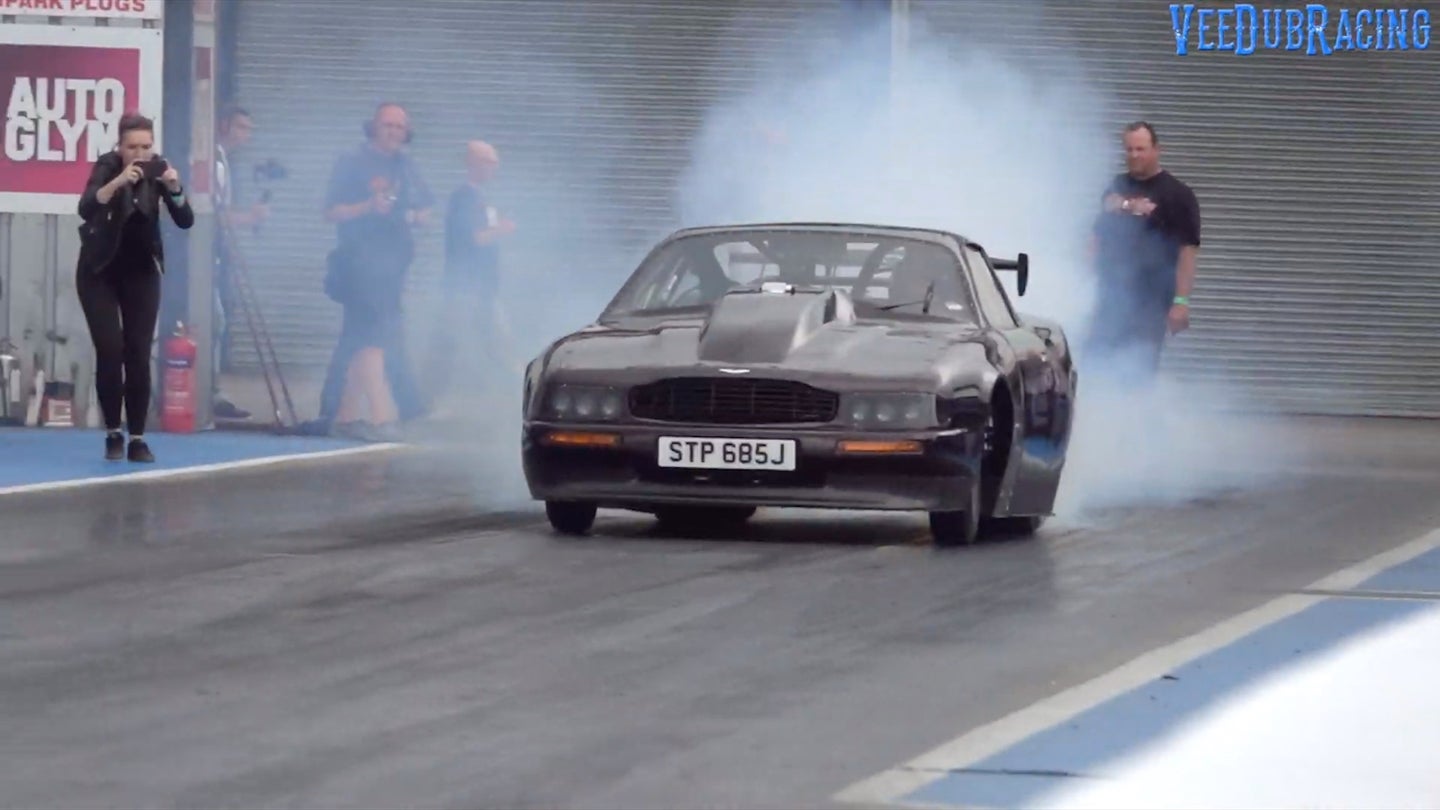 When we stumbled across the 9.8-second Geo Metro drag car in March, we thought we'd seen it all. We hadn't. What you see before you is probably the world's fastest—if not the world's only—Aston Martin drag car.

Reportedly the brainchild of one Mark Todd, this land-borne missile appears to be based on a 1993-2000 Aston Martin V8 Vantage, sharing its headlights, taillights, windows, and certain body lines with the limited-run Aston. Originally featuring a 5.3-liter, twin-supercharged V8, the Vantage was among the most powerful cars of its decade, producing over 550 horsepower and 550 pound-feet of torque.

To make the V8 Vantage into a drag car, though, Mr. Todd needed more power, and without much aftermarket support for the Aston 5.3, he was forced to look overseas for some muscle. He reportedly found it in the form of a 568 cubic-inch (9.3-liter) Chevrolet big-block V8, to which a colossal, 118-millimeter turbocharger was grafted. Together, the two are good for a reported 2,500 horsepower.

Todd reportedly put his full stable on display this May at Santa Pod Raceway's Doorslammers drag bracket, which offered the biggest prize pool in British drag racing history: £80,000 ($98,000). According to event results, Todd didn't win any categories, but his times shown in the video below suggest he was just getting a feel for his newborn drag Aston. His first run of the video clocks 8.180 seconds at 172 miles per hour and his second improves drastically, tumbling to 7.812 seconds at almost 180 mph.

According to a caption in the video, Todd has since managed to chop almost a second off the better of the two times depicted in this video, with a pass in 6.93 seconds at 202 mph. Though that time's closer to seven than six flat, the drag racing world would label this a six-second car, meaning this is probably the world's sole six-second Aston Martin. Hats off to the people who made this bizarre car a reality—let's hope they do the same with a 2018 Vantage sometime soon.

Only 19 models of the super-exclusive grand tourer will be made.