Yes, it's for sale. And yes, it'll do the quarter-mile faster than a $3.5-million Bugatti Chiron. 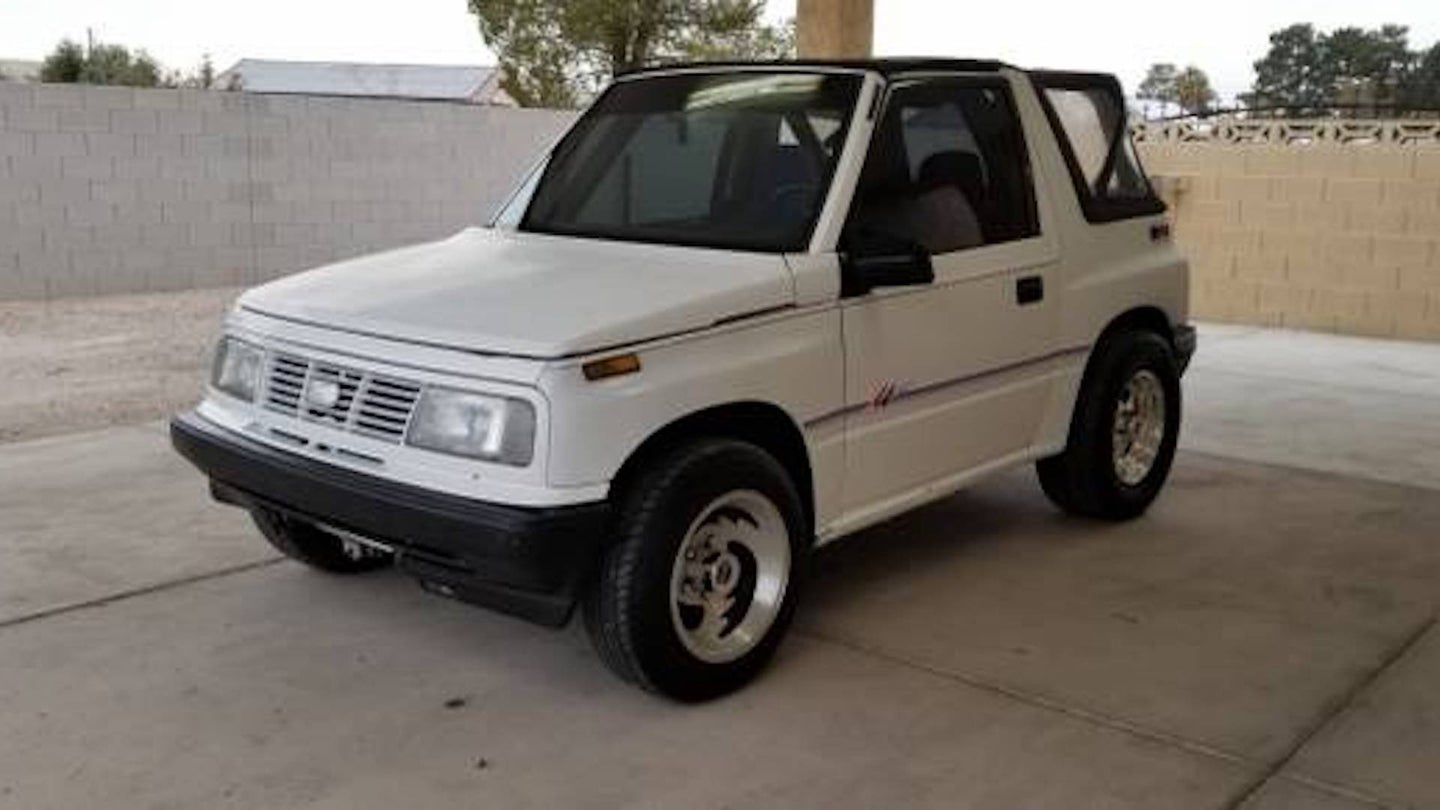 If you're looking for a Geo Tracker that can run a sub-10-second standing quarter-mile time, today is your lucky day. What can safely be described as the ultimate sleeper, was just listed for sale in the Las Vegas Craigslist: a 1993 Geo Tracker with a 6.0-liter turbocharged V8 engine stuffed under the hood.

According to the ad, this Geo Tracker—a rebadged Suzuki Sidekick—started out in life as a base model, with a 1.6-liter, four-cylinder engine making a paltry 80 horsepower, sent to the rear wheels only by a five-speed manual transmission.

But that drivetrain is long gone, because the four-cylinder engine has been replaced by a larger General Motors LQ4, known to some as a Vortec 6000, which was the 6.0-liter V8 found in the Chevrolet Silverado, Suburban, and Express between 1999 and 2007. It produced between 335 and 370 horsepower new, depending on specification, but with a single ON3 7875 turbocharger, it makes a lot more than that—enough to buck this little Geo up onto its rear wheels from a standing start on the drag strip.

To withstand the added torque, this Tracker has a transmission to match its engine: a truck-grade 4L80E, itself modified for drag racing with a custom torque converter, a transmission cooler, and a shift kit. The rear axle has been replaced with that of a Ford, using the 8.8-inch limited-slip differential in the center.

Though no dynamometer sheets are available, a video of the Geo performing its advertised nine-second pass (specifically, 9.97 seconds) can be found below, though the owner says he's pulled off a 9.8-second run at 132 mph. For reference, the $3 million, 1,500-horsepower Bugatti Chiron has been recorded running a comparable 9.9-second quarter mile.

Unlike the Bugatti, this Tracker doesn't cost seven figures. It's being sold for just $14,500, or about a tenth the price of a similarly quick Dodge Demon, used. There's no cheaper way of breaking the ten-second barrier, but be warned, the seller won't hand it over to just anyone. He rightfully says that it's not a car for amateurs, as it's a high-power, short-wheelbase vehicle, and won't let buyers test drive it without a briefcase of Benjamins on hand.