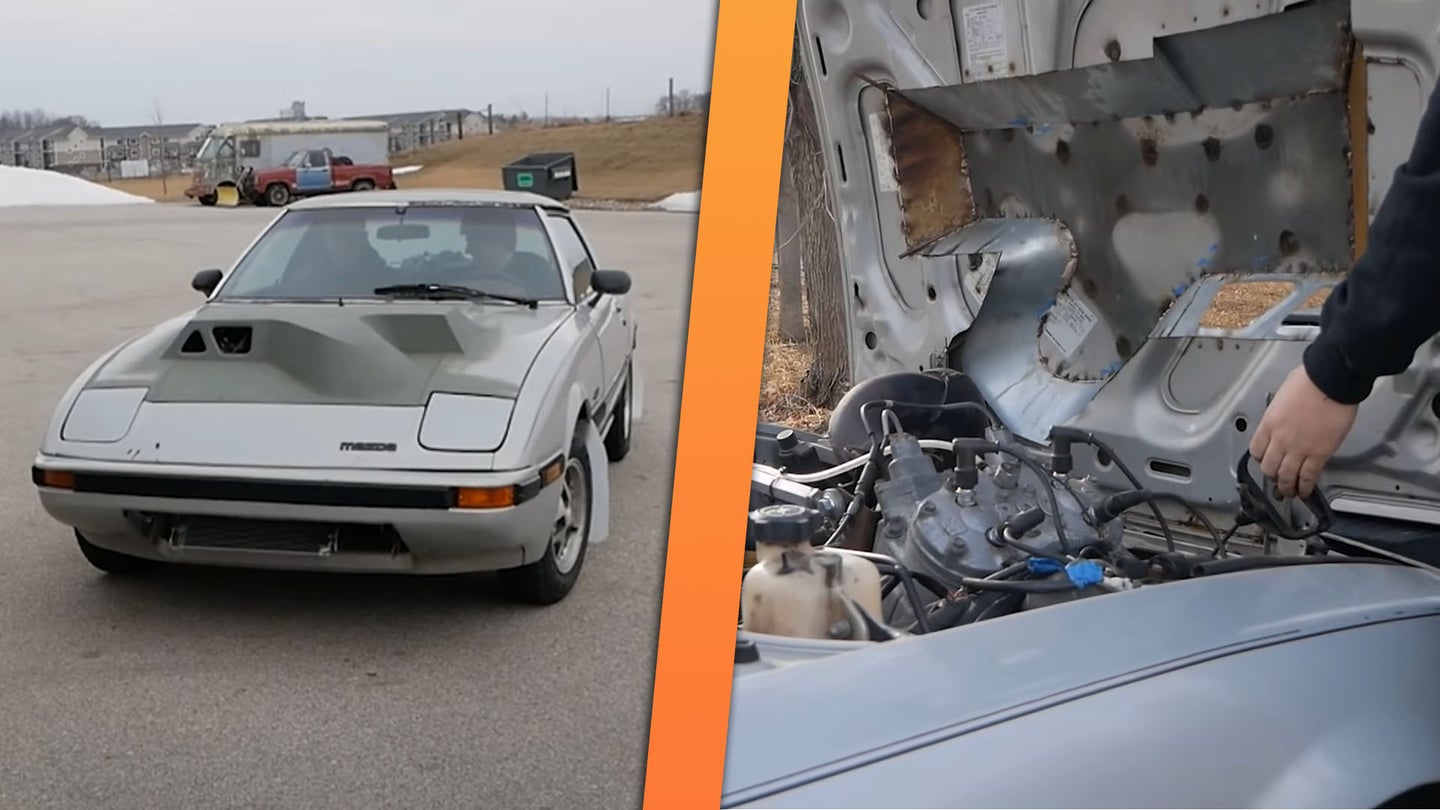 Engine swaps can be relatively straightforward, at least on paper. You take the power plant from one car, put it in another, button it all up and bingo, you have the custom machine you've always dreamed of. Sometimes, though, lumps from other, less conventional vehicles are used, and one I haven't seen before is a snowmobile engine swap. Clearly, I didn't know what I was missing.

YouTuber Junkyard Digs recently purchased such a snowmobile-powered vehicle, and it's a surprisingly good fit. It's an 800cc, 145-horsepower, two-stroke unit made by Arctic Cat, and it's been adapted to work in a first-generation Mazda RX-7. When I say adapted, I mean it's been bolted without any bushings to the factory mounting locations with a lattice of bracket work, then mated to the stock transmission with a custom belt drive. It's sketchy, but there are definitely worse-looking installs out there.

The Snowmobile's stock centrifugal clutch and the pull-start have been kept around, so it's just a matter of picking a gear and mashing the gas. The car's builder, who Junkyard Digs bought it from, says third is a good balance. "Third gear is like basically the best in the car," he said. "It gives you really good low end and really good top end." He also notes that due to the new engine arrangement, shifting while driving doesn't quite work right. Best to just pick one.

The owner reports that the car, along with its aesthetically pleasing new hood, can hit 60 miles per hour in around six seconds. That's really quick considering later dyno runs show it putting just 80 horsepower to the tire. Really, that drivetrain loss is the only sticking point. With the Arctic Cat engine equipped, the car has near-perfect 50/50 weight distribution; plus, it still sounds something like a rotary. The builder even notes it's probably more reliable than the stock engine. After a truly copious amount of drifting, burnouts, and donuts, the thing seems totally unphased. It's air-cooled, after all, so it's not like it's going to overheat.

This is a really cool build and it makes me think about other car applications for snowmobile engines. The motors in some top-trim sleds today are unbelievably compact and powerful. It would be neat to put one of those in an all-wheel-drive vehicle; it'd definitely be smaller than the stock engine, meaning there'd be plenty of clearance for any extra drivetrain components. The exhausts on these are definitely a pain point, though, as they're a specific length and shape to assist exhaust scavenging. Messing with that too much can seriously affect the performance at certain RPMs. The last thing any would-be swap artist wants to deal with is a huge horsepower deficit.

That's just a bit of bench-racing, though. This is a great build that might be the only swap to upset rotary enthusiasts a little less as compared to other piston engines. Junkyard Digs clearly wasn't thinking about that, though. He and everyone else who drove it in this video were smiling too hard to consider much else.