The former-plane-turned-RV draws plenty of attention when it's out on the highway. 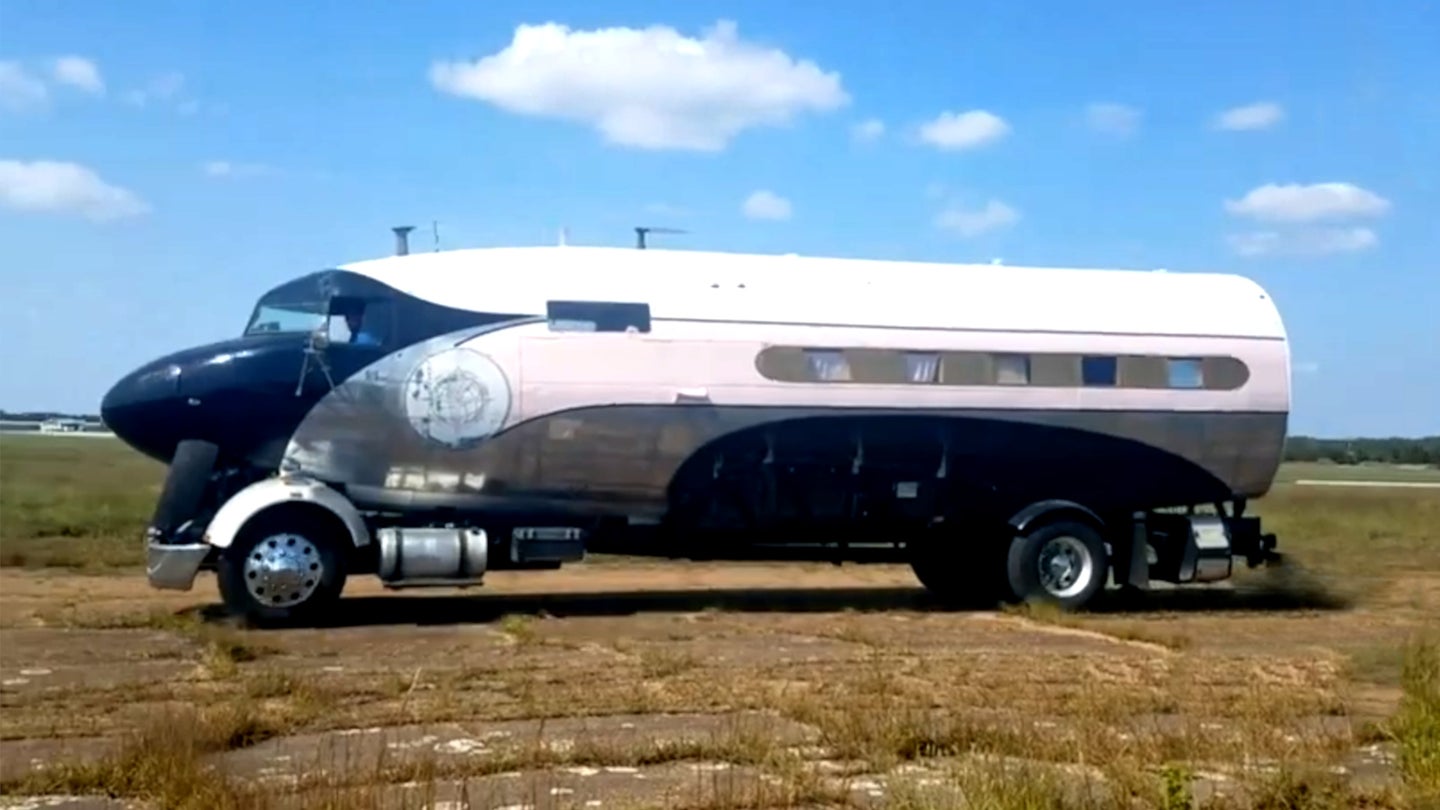 It's not every day you see an aircraft rolling down the highway, and if you did, you'd be forgiven for thinking there's been some kind of in-flight disaster followed by an emergency landing. However, in the case of the Fabulous Flamingo, what you'd actually be looking at is a custom-built RV put together by Gino Lucci and his son Giacinto.

The donor plane for the project was a Douglas R4D, a modified DC-3 designed for Navy service. The plane was built in 1943 before entering service in 1944, spending much of its service life in South America during World War II as an executive transport. It later went on to work for the Federal Aviation Administration flying test routes for navigational purposes. Its last flight was in the 1980s, upon which it was laid up before later being damaged beyond repair by a tornado and parts scavengers in intervening years.

The father and son duo bought the plane in mid-2019, stripping off useful parts to support a French-based restoration of a similar aircraft. Efforts were taken to preserve as much original equipment and heritage of the aircraft as possible. Such authentic touches are visible all over the build, from the kink in the fuselage from prior damage, to the front wheel fenders built out of the former engine nacelles.

"We wanted to keep a lot of the themes and stuff that makes the airplane, the airplane itself," explains Lucci in a video about the project. "These pieces here that we smashed our heads a couple hundred times while building it, they're actually the wing attach points on the airplane, which makes it exactly right at the max legal width in all 50 states."

The plane body is assembled on top of an International truck frame, fitted with a big diesel powerful enough to haul the rig down the highway without complaint. Inside, there's all the basics one would expect in a homebrew conversion RV, with beds, a bathtub, and sink and all the rest. Best of all, much of the cockpit remains virtually unchanged from the original Douglas equipment, with Lucci going to great lengths to integrate the RV's systems with the plane's original control panels. Rooftop switches control air conditioning and heating, and there's still a pilot intercom, too. The International truck's basic gauge cluster and steering all remain intact inside, too, along with a modern double-DIN head unit for in-plane entertainment.

In an interview with FOX 17 WXMI, Lucci shows off the interior of the build and takes it out for a drive on local roads. It's not the quietest ride, but the experience is undeniably special. "When there's snow on the ground, because it's all white, it looks like you're above the clouds," jokes Lucci. "I guess I'm just a big kid, you can pretend."

Such conversions are road-registerable as long as they're properly inspected and meet all the necessary requirements. The Fabulous Flamingo is registered as a Class A motorhome, with the conversion likely posing few problems as it's based on an existing road-going truck frame. The plane merely counts as a rather unconventional body on top. While plane-conversion RVs are still thin on the ground, we've seen other plane bits modified in similar ways—such as this cute little jet-engine camper.

It's a dream project made in to reality, with Lucci finally completing the build in late 2020 after first being inspired at the young age of 12. It looks like an absolute hoot to drive, though we imagine it's probably difficult to fill up at the pump without getting more than a few curious onlookers asking questions. Of course, that's pretty typical whether your oddball RV build is big or small. Overall, it's a great example of what can be achieved when you follow through with whatever crazy idea your heart desires.