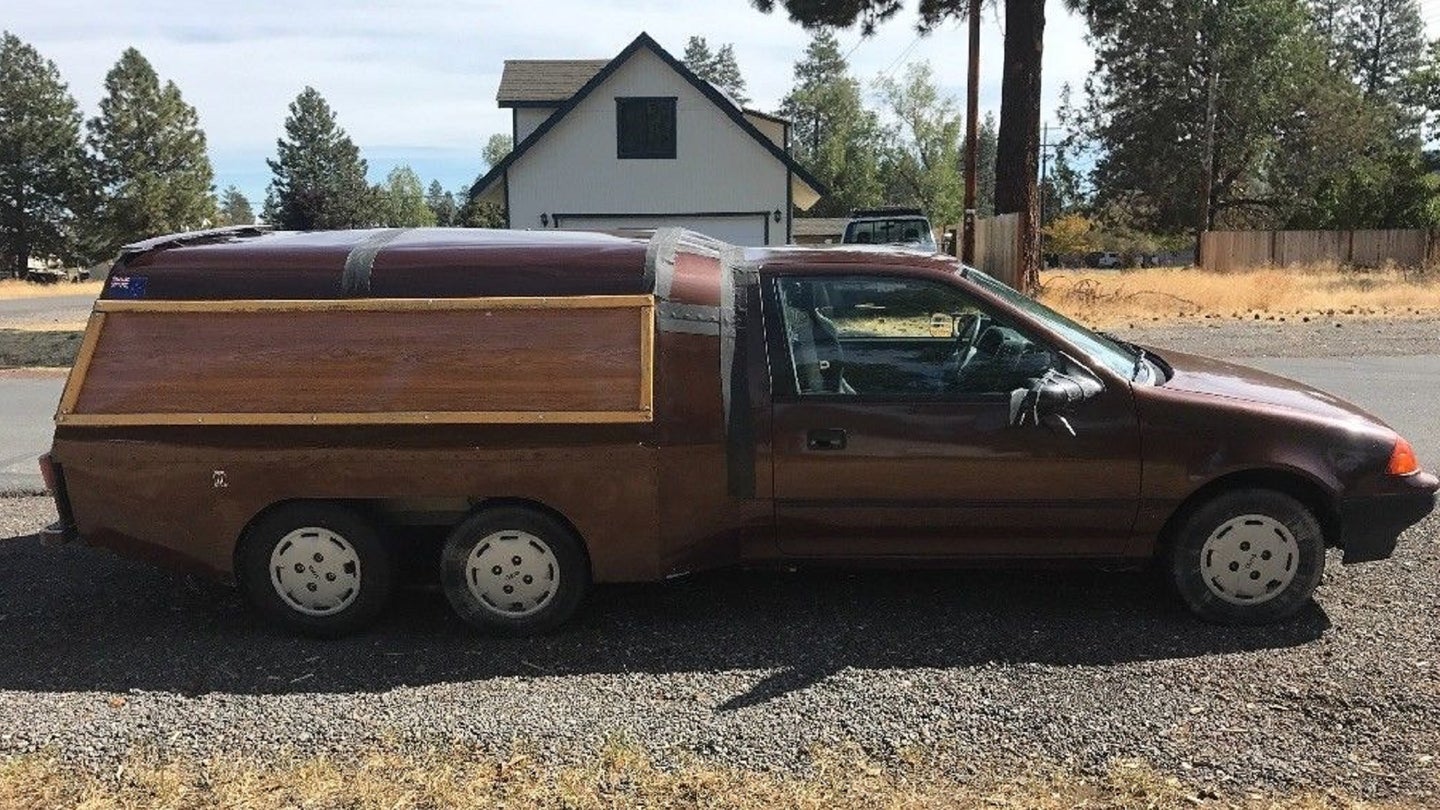 Recreational vehicles are a fun way to travel without sacrificing the comforts of home. Unfortunately, they can be expensive to run, usually get poor fuel economy, and—with many being the size of city buses—can be difficult to maneuver and park. But this modified 1991 Geo Metro for sale on eBay may provide, if not the best of both worlds, at least a rather unique solution.

Rather like your humble author's VW Jetta Smyth Ute, this Metro appears to have been cut from the B-pillar back and transformed into something new. But rather than removing the body and adding a truck bed, this addition has been flared out and extended significantly longer than the original car.

For reasons unknown, a second pair of rear wheels has been added. Though many RVs have these, it's unclear why something this small would need them, particularly in a front-wheel-drive vehicle. But the ad does state that the conversion was "Custom fabricated by a Boeing airplane manufacturer," and from the pictures, it does appear to be rather well-made.

The original taillights remain, but those appear to be the only original parts back here. It appears to have a back window that can open like a pickup truck cap, though the ad notes that this is broken. Though it does appear to be equipped for towing, you probably wouldn't want to.

Again from the ad: "With six wheels and three cylinders, it's not the fastest car in the world. Steep grades you have to drop into third at around 40-50 mph." That, plus a broken radiator fan, means it's probably working hard enough as it is.

Up front, it's a standard Geo Metro cockpit, though with only one seat for the driver. Perhaps the passenger seat was removed to provide access to the back with the broken back window. A custom electrical control panel hangs below the dashboard, but it's unclear what these controls actually do.

The rear portion is fairly short and could be claustrophobic for some. It has been creatively decorated with carpet tiles on the floor and a collage along the walls and roof. Curtains in the front and back at least provide some privacy, though there doesn't seem to be much room to live in here.

This issue is partly solved by two large storage units underneath the floor. Yet with so little space in the back of the "RV," it would seem you would have to clear out the entire interior just to gain access to them.

Under the hood, the task of motivating this creation falls to this poor underpowered three-cylinder engine. Though capable of achieving more than 50 miles per gallon in a standard Metro, the ad says you should expect closer to 35 in this particular vehicle. The ad lists many new parts, including a new head gasket just 3,000 miles ago. (Though one could question whether the reason the head gasket needed to be replaced might be because of the extra load the expanded body puts on the engine.)

A vehicle like this really doesn't make much sense at all. But does it really have to? It certainly wins many style points, and has that "WTF" factor  few other RVs can offer. Best of all, with just a $7,000 Buy It Now price, this may be one of the most affordable RVs you can buy. It's almost certainly the easiest RV to park.