'He Was Just Grandpa to Us': Carroll Shelby’s Grandson Aaron on Growing Up with a Legend

Aaron Shelby talks about what it's like to carry on the legacy Carroll built and what Ford v Ferrari did right. 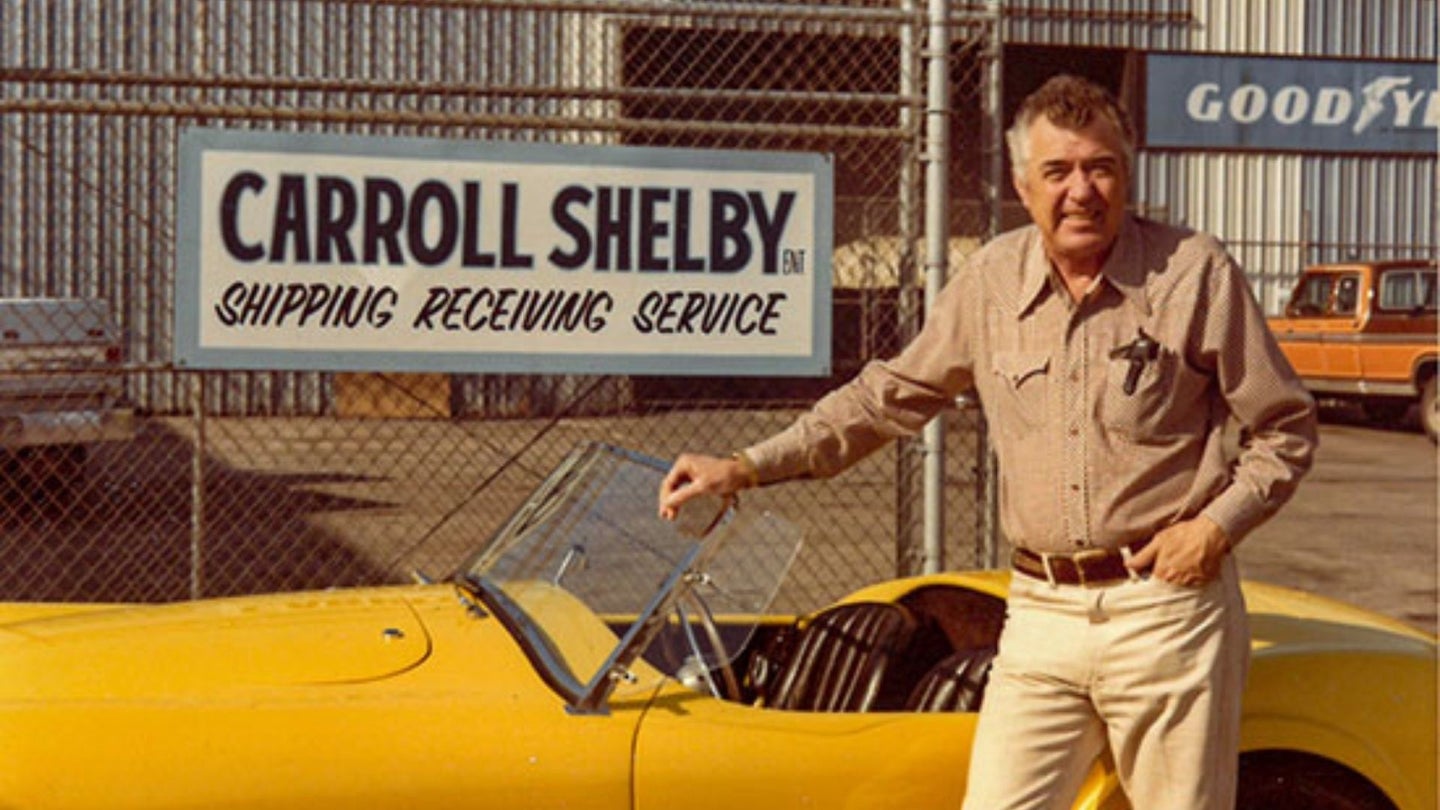 Ford’s Mustang Shelby GT500 is in its second model year, and it’s a beast. It has a 760-horsepower supercharged V8; plush Recaro sport seats; and lighter, wider tires than it’s ever had. Driving it on the track at the Texas Motor Speedway a few weeks ago, I got to test out the 0-60 sprint and whip it around the oval. It shifts in a stunning 80 milliseconds and the six-piston Brembos stop the GT500 quickly and smoothly. I'm smitten.

The man behind the Shelby legacy, of course, is Carroll himself. By now, you’ve seen Ford v Ferrari with Matt Damon playing the inimitable automotive designer and entrepreneur, and that gives you just a taste of who Carroll really was. He passed away almost a decade ago, but his grandson Aaron Shelby carries the torch his grandfather lit back in the ‘60s. I wondered what it was like holding up a name that is synonymous with muscle car history, and Aaron was gracious enough to sit down with me to talk about it.

THE DRIVE: Aaron, your day job is vice president for a bank in Dallas, and you are also on the board for the Carroll Shelby Foundation. I know you attend Shelby customer events as much as you can, and it was nice to see you again at the GT 500 drive in Dallas.

AARON SHELBY: It was a lot of fun. That was the second time I've had the opportunity to participate in that program, and it's been really successful with both the GT350 and the GT500 to give folks that maybe don't have as much experience in the car the ability to go drive it, spend time on the track with it, and really see its capabilities.

THE DRIVE: When people hear the Shelby name, they think of automotive royalty. How does that feel for you?

SHELBY: It's fun to see how much enthusiasm still exists around the name Shelby and what the image of Carroll brings to mind.

THE DRIVE: What was he like when you were growing up?

SHELBY: For me and the rest of his six grandchildren, he was just Grandpa. I would say in some ways, he was a typical grandfather. I grew up in Dallas and he was primarily in Los Angeles, but he had a farm in East Texas where we would visit him quite a bit. I really knew nothing about his history and cars when I was small, because it was the ‘70s and early ‘80s and he wasn't in the car business at that point in time. We just knew him from being out at the farm and that he traveled around the world a whole lot.

When he started back with Chrysler in the early ‘80s and he was on the front of all the car magazines again, that's when I learned more of his history with Ford and the Cobras and Mustangs. I'd heard about the cars through my father and other family members but didn't know that much about it.

THE DRIVE: Did you know when you were growing up during your high school and college years that you were going to do what you're doing now?

SHELBY: No, I had no idea. As far as the Shelby work goes, it's certainly a passion for me, and any time Carroll was doing something in an event I’d attend if I could. I learned a lot about it and met the people, but when he was alive, I really never viewed that there was a place for me to be a part of that. It was his business and he was such a personality.

Now I enjoy it. I like to travel, and I like the enthusiast crowd. I've got a passion for the cars and to do my part to continue on the Shelby legacy. I think it’s really special, so I jump in with both feet as best as I can.

THE DRIVE: I wonder, do you ever feel the pressure of holding up that family name?

SHELBY: You know, I don't think I do. Carroll carries a lot of credit for that, and he was about as down to earth as they come. He was just an ordinary guy, and he did some extraordinary things, but at the end of the day he was no different than anybody else, and he treated everybody just the same. He had this ability to recall people's names and history that was just amazing; he made everybody feel like his best friend.

One one of my favorite things is meeting people who spent time with Carroll and whether they met him once or a dozen times, they've all got a story. For me, it's a lot of fun to hear those stories, and the common thread amongst all of them is his ability to make people feel comfortable and that he was interested in what they were saying. So I try to do the same. I don't have quite the name recall, but I can remember people pretty clearly if I've met somebody before. I truly enjoy it.

THE DRIVE: What do you think the movie Ford v Ferrari got right and what were they wrong about in the portrayal of grandfather?

SHELBY: I think they got his character really pretty accurate. He was certainly a salesman; he could sell ice to the Eskimos if needed, and he did sometimes. But he also played that political role, and I thought that played out well in the movie.

He gave his team cover to let them do what they wanted to do, and that part of the movie was accurate in how they portrayed him. When you're trying to put in four to five years of content into two hours, it's hard to get it all right, so it had some things out of order but nothing drastic. I thought for the general public, it was a really good way to tell the story.

THE DRIVE: What is the overall story about Carroll that you think not enough people tell?

SHELBY: You know, what is sometimes lost because it's so focused on cars is that he was truly an American icon from a business perspective. He was the epitome of an entrepreneur; he woke up every day with new ideas and wanted to push the envelope on whatever it was he was working on. It just so happened that cars were where he found his early success. He was late to the game as a business person; in his late 30s, he was in the Air Corps coming out of World War II and went through several failed businesses while he figured out what he wanted to do.

A lot of people don't know that in the 70s, he launched Carroll Shelby chili mix. He did really well with that and sold it to Kraft in the mid-80s. I could look at a dozen different things in the last 20 years of his life that he did that he lost money on, and he would just say, 'Well, we tried it." He had what I call iconic American spirit, the entrepreneurial spirit of knowing that it doesn't matter if you fail. Let's go try something else tomorrow. It's okay.

THE DRIVE: I respect that. I think that his personality and yours as well, Aaron, leads more people to appreciate the brand and to want to buy them, but also to just love seeing them. It makes a difference, and I appreciate you taking the time to sit and talk to me about it today.

SHELBY: Happy to help. It's a lot of fun for me to be involved and just do my little part to help continue on that legacy my grandfather started.