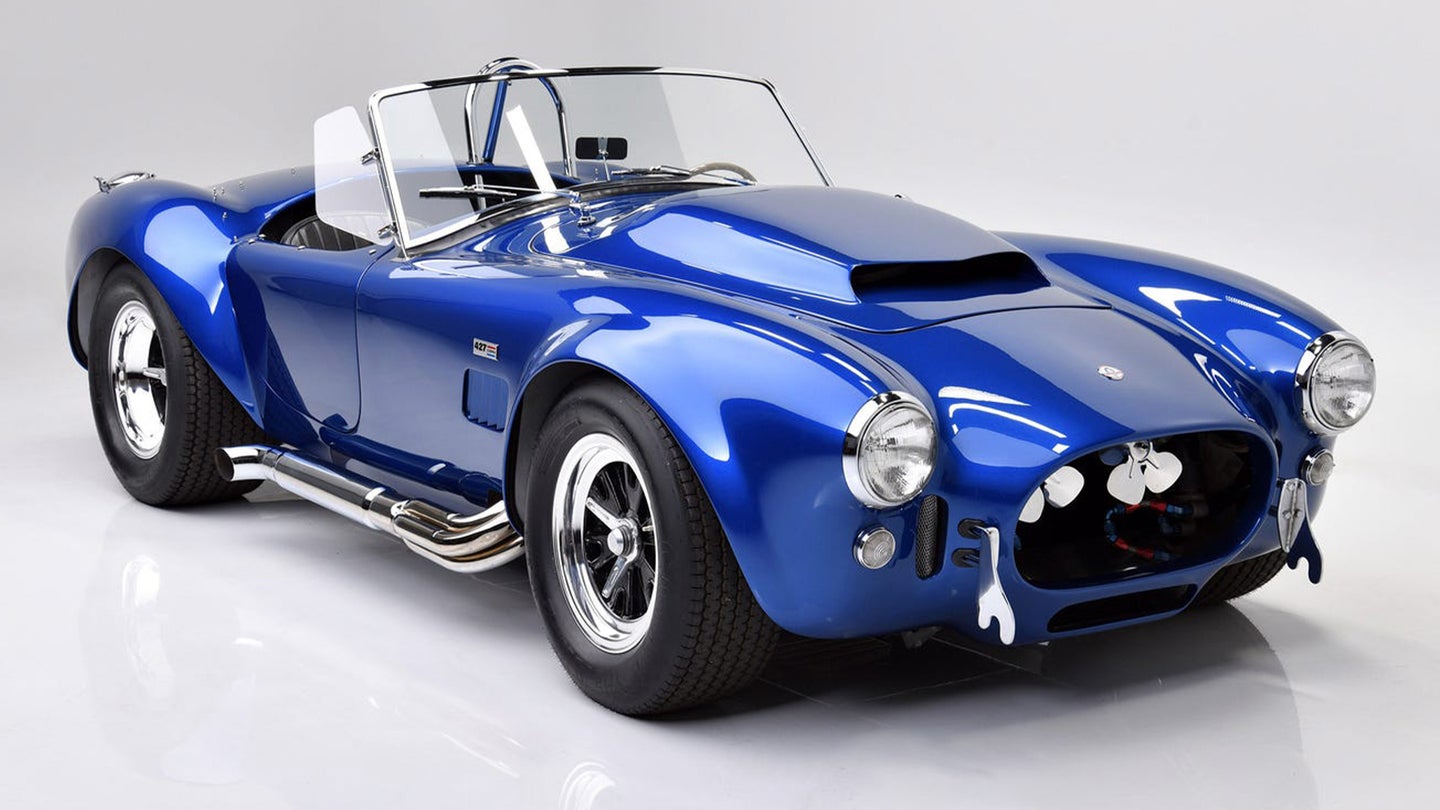 Carroll Shelby was a motorsport legend whose legacy helped to shape performance cars as we know them today. There's one particular pet project of Shelby's that stands out more than anything, though—the 1966 Shelby Cobra 427 Super Snake.

Coined the "Cobra to End All Cobras," the Super Snake became one of the most notable cars ever built by Shelby American. In fact, it was one of just two high-performance examples produced and originally belonged to Carroll Shelby himself. Now, the rare roadster is up for sale at Barrett-Jackson, so get your wallets out and prepare to spend graciously, because this one won't go cheap. Seriously.

Shelby's personal Cobra going up for sale might sound familiar—and it should, given that this will be the third time it crosses the auction block at Barrett-Jackson. Previously, the car has fetched $5.1 million when it last sold in 2015, and $5.5 million when it personally sold under Carroll Shelby's watchful eye in 2007.

Now, I know what you're thinking. $5 million is a pretty penny, even in the world of car collection. So what makes this particular car more valuable than a regular Cobra?

Other than the fact that it was Carroll Shelby's personal car, it was also a direct result of his explosive rivalry with Ferrari.

This particular example started life as one of the 23 Shelby Cobra Competition Cars built. After a brief stint in Europe, it was returned to America where it was reclassified as a Semi-Competition in order to make the car street legal. That meant adding a windshield, mufflers, and bumpers to actually make the Shelby comply with regulations.

Legend has it, Shelby—who loved to travel—frequently went on trips to Lake Tahoe with his personal friend and former lawyer, Stan Mullin. Stan owned a Ferrari that could outpace Shelby's 427 Cobra, and one day Carroll got tired of seeing the Ferrari's tail lights and stormed into Shelby HQ to do something about it.

The result was something completely overkill: the Cobra to end all Cobras, the Super Snake. Reportedly, the Super Snake was a tough beast to tame, as its already ample V8 was supplemented by the help of two Paxton superchargers that force-fed compressed air through a pair of Holley four-barrel carburetors. The standard four-speed Borg-Warner manual transmission was also swapped out in favor of a three-speed Lincoln Cruise-O-Matic auto.

It's believed that the Super Snake made somewhere in the neighborhood of 800 horsepower when it was produced in the '60s, and it was able to bolt from zero to 60 miles per hour in just three seconds if the tires could hook. And as Barrett-Jackson's CEO, Craig Jackson, recalls—the Cobra "ate that Ferrari alive."

In 1970, Shelby sold the car to celebrity songwriter Jimmy Webb for $10,500. Webb owned it until it was seized by the IRS and sold at auction in 1995 where it was purchased by Ferrari collector Chris Cox for $375,000. In 1998, billionaire Richard Scaife purchased the Cobra and held onto it for eight more years before selling it back to Cox. The car went up for auction at Barrett-Jackson for the first time in 2007, securing a hammer price of $5.5 million by collector Ron Pratte, and in 2015, the car went up again where it brought in slightly less—$5.1 million.

It's important to understand the legacy that makes people covet this car. It's the vehicle that Shelby himself woke up entire towns with as he opened up the throttle in the early morning hours. The car Shelby gripped the wooden steering wheel of as he blew the engine during a road race and left it near the ditch. The car that was pulled over by the Nevada Highway Patrol for apparently going 190 mph, which was considered to be "reasonable and prudent"—something only the case when you're Carroll Shelby.

Shelby was ecstatic about this car when he watched it sell in 2007, and those kinds of memories live on through his signatures peppered throughout the car.

This particular car is one of two Super Snakes ever produced. The other was built for comedian Bill Cosby who once recalled just how difficult the car was to drive (and how much Shelby loathed Ferrari). Cosby eventually sold the car to a California dealer where it was later resold to a man named Tony Maxey in 1969. Maxey famously drove the car off of a cliff and into the Pacific Ocean in a fatal accident. The whereabouts of the wrecked Super Snake's remains are unknown, but they were rumored to have been sold to Shelby's rival Brian Angliss, the owner of Autokraft.

Nevertheless, this Super Snake will once again change hands, assuming the reserve price is met. As the Detroit Free Press reports, Barrett-Jackson expects it to fetch between $5 million and $8 million when it's auctioned off in March.