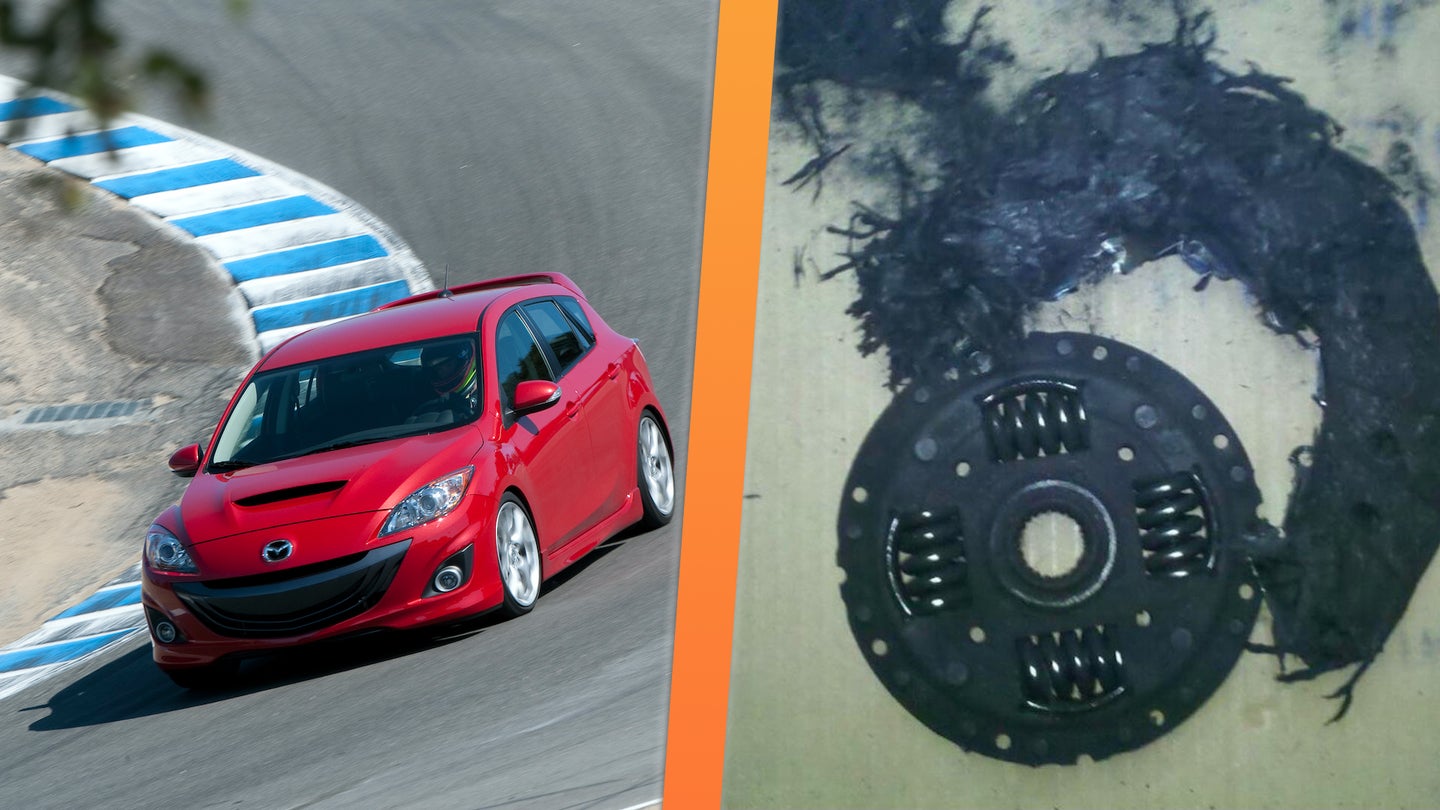 Almost everyone who can drive a manual transmission has embarrassing memories of learning the technique. Some people repeatedly stall, while others set off with lurches and screeches. But few learning experiences go as badly as the time one inexperienced driver took a then-new Mazdaspeed3 for a test drive, only to return with the clutch completely shredded.

The toasted clutch shown above comes from a recent post on Reddit's r/justrolledintotheshop community for mechanics, posted with the caption "When the dealership lets a kid with zero manual transmission experience test drive a Mazdaspeed3."

Poster HairJordan87 explained in a message to The Drive that the photo was taken in 2010 when Mazdaspeed3s were still on the lots, and that their dealer had a red example like the car above in stock. One day, a "kid from the rich part of the state" came in to take it for a test drive accompanied by a salesperson who was apparently also not great at working the third pedal. You can see where this is going.

During a test drive that HairJordan87 recalled as "no longer than 30 minutes," this salesperson noticed something was wrong with the car, and took over for the return drive to the dealer accordingly. The clutch held up long enough to get there, but took the poor hot hatch no further.

"We knew the clutch was screwed as soon as we heard it get back into the lot," HairJordan87 told The Drive. "After it was parked and had cooled down it would not move out of any gear. That's when we pushed it in and I dropped the transmission. All of that clutch material had fallen out as soon as I separated the engine and transmission."

The you break it, you buy it maxim, however, failed to apply, as the kid's "father stepped in to talk him out of having to pay for any repairs." Naturally, the two left without buying the car, whose clutch was warrantied before being returned to the lot.

"The flywheel was discolored, but being that it wasn't damaged, the company did not approve the warranty on the flywheel so we just cleaned it up," HairJordan87 continued. "The pressure plate on the other hand was toast, but fortunately, that was part of the clutch kit."

Exactly how someone destroys a clutch in a half-hour test drive is hard to imagine, though it must have involved footwork so clumsy that we can only assume that the driver's prom date suffered painful foot injuries from any attempts at a slow dance. Whatever the case, it was a showing of ineptitude that—like the rest of us—HairJordan87 wish they had seen.

"I honestly wish I was in the car when he did this, because the other tech and I were astonished," he said.

What Is Double Clutching and Should I Actually Care?