The 2019 Mazda3 is already out, so why are there two of them sporting full camouflage with new aero components? 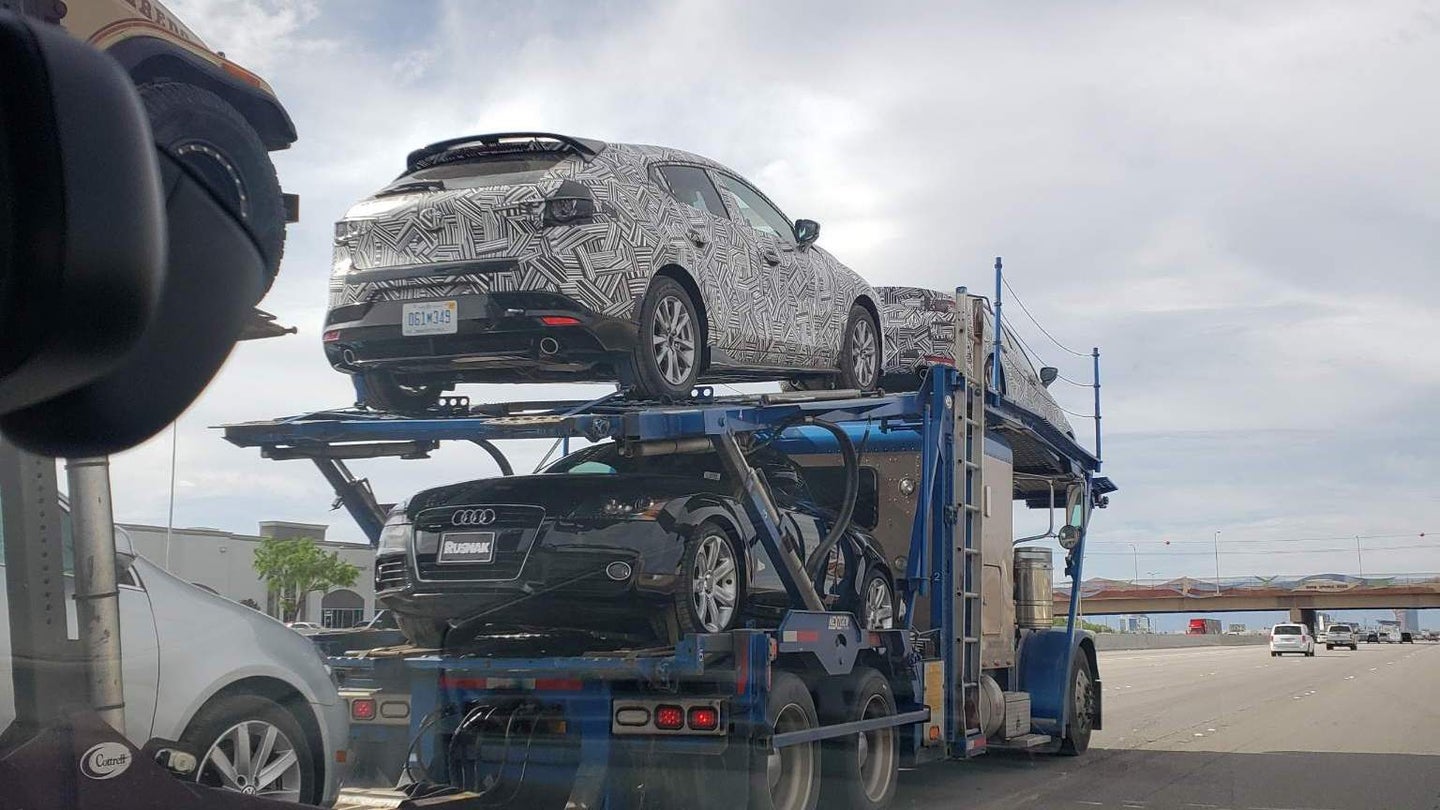 Camouflaged Mazda test mules have been photographed on the back of a car carrier, leading to speculation that the vehicles are prototypes for an upcoming sports sedan or hot hatchback based on the new generation Mazda3.

The above photograph was taken by Reddit user Disconaut, who says they were driving to Las Vegas, Nevada on May 15 when they sighted the vehicles and snapped a photo. Based on visible details on the hatchback's rear bumper, we can tell that the vehicle is a 2019 Mazda3 hatchback, while the photo's source says the sedan in front of it—barely visible in the picture—was a 2019 Mazda3 sedan, based on what they could see of the grille. The design of the vehicle's taillights matches that description, supporting this assertion.

Multiple outlets reported in April that a splinter cell within Mazda's North American operations built a mockup Mazdaspeed3 based on the current model. These reports are likely the basis of the photographer's speculation that the spotted Mazdas are sporting variants, and the photos back up their claim.

While this Mazda3's camouflage makes it look vaguely like a Ford Focus, the location and integration of the rear bumper reflectors identify it as a Mazda. Additionally, it bears Michigan "manufacturer" plates, available only to automakers, meaning this is indeed a corporate car. Atop its hatch is a strange rear spoiler that hasn't been seen before on the redesigned Mazda3, potentially identifying it as a test mule for a hot hatch variant.

Based on statements from the Mazda3's program manager Kota Beppu, one potential drivetrain formula for a revived Mazdaspeed3 could be a combination of all-wheel-drive, a manual transmission, and the turbocharged 2.5-liter Skyactiv-G engine found in many of Mazda's larger vehicles today. In any potential Mazdaspeed3, its power output could exceed that of its most powerful state of tune today, which is 250 horsepower and 310 pound-feet of torque. That's assuming Mazda doesn't adapt its cutting-edge Skyactiv-X to hot hatch duties, though that engine's primary role is as an economy power plant, rather than a performance engine.