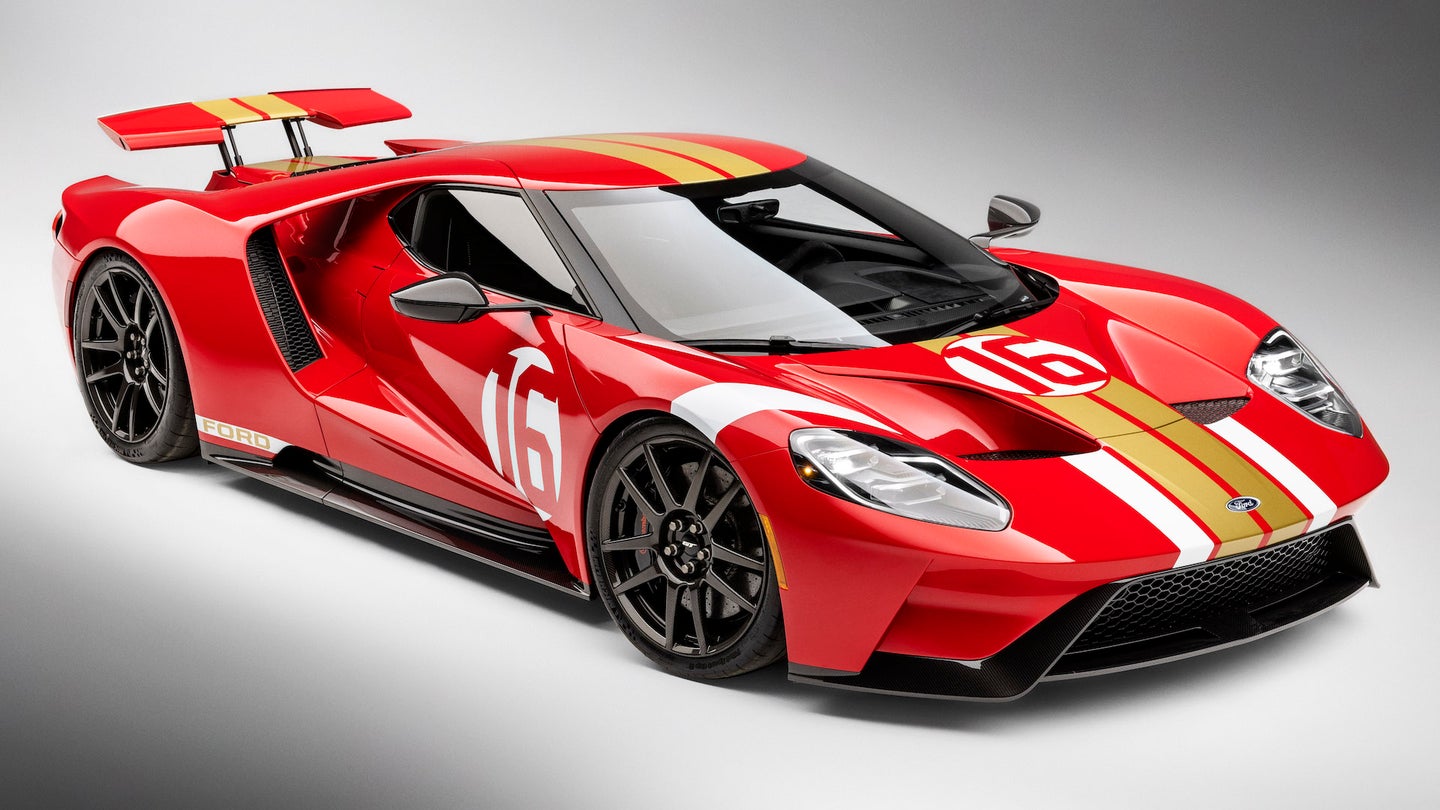 Believe it or not, the current V6-powered Ford GT (a.k.a. the car that still exists in my mind as the "new" Ford GT) has been around for seven years. First unveiled at the 2015 Detroit Auto Show, Ford initially only planned to build 500 examples over two years but later doubled those plans to 1,000 cars over four years... before adding yet another 350 cars to the production run, pledging to build them all the way into this year. And making its debut at this week's Chicago Auto Show is the latest in a long line of special-livery "Heritage Edition" cars.

Despite what it may look like, no, the red, gold, and Frozen White livery on the Ford GT Alan Mann Heritage Edition is not part of a joint marketing deal with McDonald's, but rather a sendup of Ford's 1966 experimental GT racing prototypes built by Alan Mann Racing, as its name suggests. One of those happens to be the 1966 Ford AM GT-1 prototype.

Said to sport a weight-saving aluminum skin, the GT-1, as well as development lessons gleaned from the Alan Mann Racing team back in the day, were partially responsible for the GT40's success, most directly resulting in Ford's racer securing the third- and fourth-fastest lap times in the 1966 Le Mans trials. The race-spec Alan Mann-backed GT40s eventually retired from the actual Le Mans race but the endeavor, of course, ended with the historic 1-2-3 Ford finish that has since been immortalized, most famously perhaps, by the 2019 film Ford v Ferrari.

Following in the old GT-1's footsteps, the new Heritage Edition GT also comes with its fair share of lightweight parts such as exposed carbon fiber wheels measuring 20 inches, a carbon front splitter, and carbon side sills. The mirror caps, engine louvers, and rear diffuser are also made of the stuff.

"There's a lot of great chapters in the Ford GT history and we wanted to focus on one of the partners who made significant contributions which resulted in our 1-2-3 win in Le Mans at '66," Ford GT marketing manager Mike Severson told The Drive. "After the '65 Le Mans race, we formed a Le Mans committee and we brought together Alan Mann Racing, Holman & Moody, and Shelby American and created a competition amongst the respective race companies. And it was a magical formula that led to the domination of endurance racing in 1966. Alan Mann is an important piece to the race program that we wanted to pay tribute to with the 2022 Alan Mann Heritage Edition."

Matching the Alan Mann livery, the new Heritage GT's Alcantara-wrapped carbon seats feature red and gold stitching while gold accents are used on the Alcantara-and-carbon-laden dash. The paddle shifters behind the steering wheel have been painted in the same shade of red that adorns the exterior.

In the usual Heritage Edition Ford GT fashion, however, performance remains unchanged. Mid-mounted behind the GT's passenger compartment is a 660-horsepower, twin-turbo 3.5-liter EcoBoost V6 that helps the Ford supercar get to a top speed of 216 mph. Inadvertently highlighting how long this car has now been in production, the GT got a bit of a mid-cycle refresh for the 2020 model year that consisted of a 13-hp bump, a broader torque band, a lighter Akrapovic titanium exhaust, stiffer Track-mode suspension, and revised venting feeding into the flying buttresses. Not something that's usually seen with limited-run, halo supercars like this.

When asked about the future of the Ford GT, Severson pointed out that 2022 would be the GT's final year and that Ford is working on building 'em and getting them to customers, but declined to comment on any plans beyond that.

In any case, the Ford GT Alan Mann Heritage Edition is apparently available for purchase for "approved Ford GT customers" and deliveries will be happening this quarter. For us mere mortals, the car will be on display alongside its 1966 Ford AM GT-1 prototype ancestor at the Chicago Auto Show, which will be open to the public from February 12 to 21 at McCormick Place.

People have been saying for years that the Ford GT should’ve had a V8. Well, it soon might.