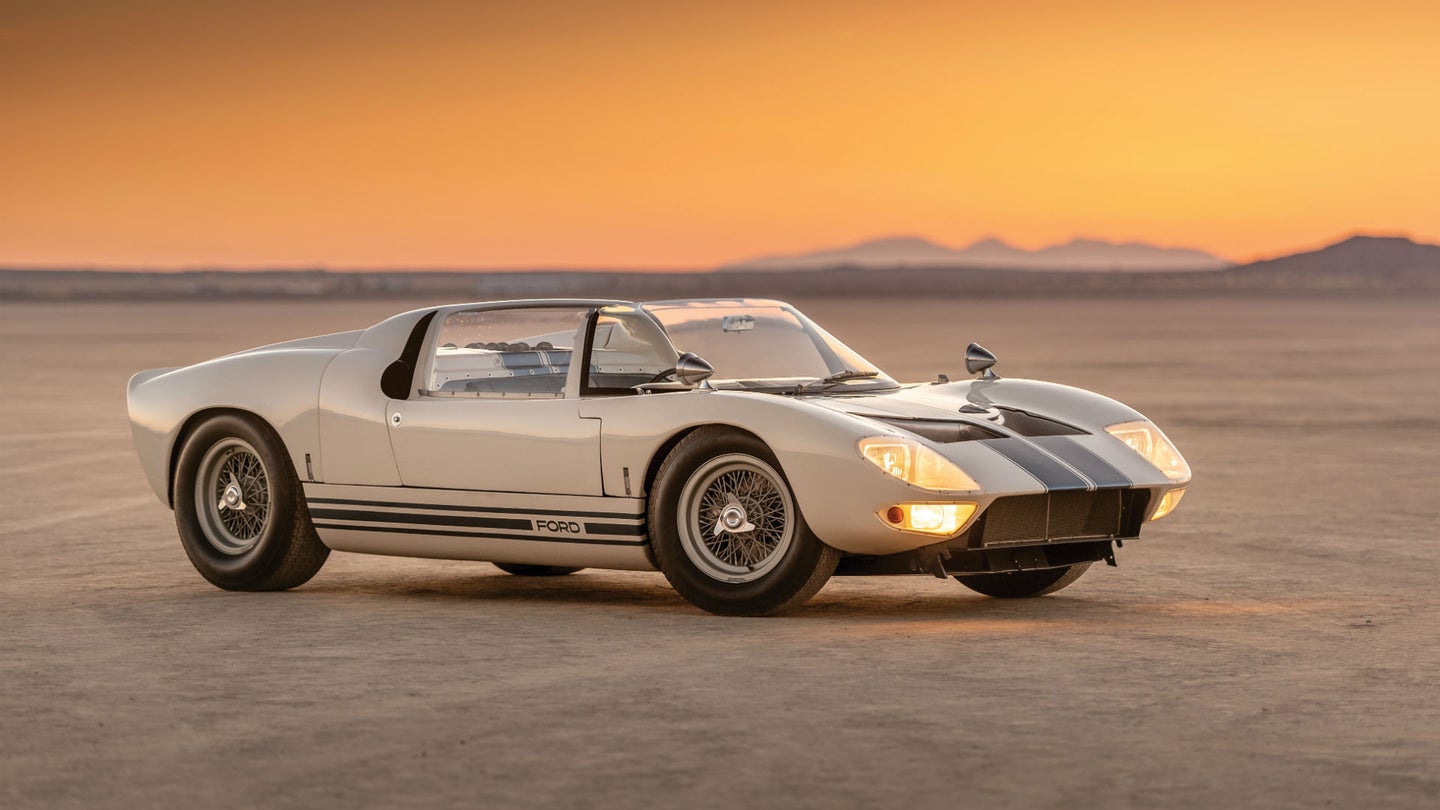 We're now mere days away from Monterey Car Week, the largest celebration of the automobile in the Western Hemisphere. While this sacred gathering of gearheads only happens once a year in Northern California, fans from all over the globe can share in the festivities by watching any one of the numerous auctions that occur during the week. A favorite is RM Sotheby's Monterey sale, which has featured some of the most historic and expensive vehicles ever sold at auction. As always, RM Sotheby's is offering some heavy-hitters this year, including this Ford GT40 Roadster prototype valued at nearly $9 million.

This car, GT/108, is one of 12 prototype GT40s built for Ford's famous Le Mans development program, and is said to be the only surviving example of the five Roadster-bodied prototypes included in that figure. It was also the first car finished at the Ford Advanced Vehicles facility in Slough, England, Ford motorsport's headquarters across the Atlantic. It was used for testing purposes at Silverstone Circuit in March 1965, driven by Dickie Attwood and Sir John Witmore.

After its bout at Silverstone, the car was snatched up by Carroll Shelby and sent to his shop in Southern California for "test purposes," touching down on American soil for the first time in its life. Instead of Shelby's claimed excuse for bringing the car stateside, GT/108 would actually be used as a promotional vehicle, appearing at car shows and track days at California while the GT40's development continued overseas. Ford test driver Ken Miles drove the car at Laguna Seca and, later, two-time Formula 1 world champion Jim Clark got behind the wheel at Watkins Glen, both for demonstration laps of Ford's fresh open-top Le Mans prototype. RM Sotheby's notes that this is also the only GT40 that Henry Ford II ever rode in, with Carroll Shelby himself in the driver's seat.

GT/108 went back to work in October 1965, acting as a test car for the new X and J series Ford GT40s fielded by Kar Kraft, making way for the Mk IV iteration of Ford's highly-anticipated racecar. The company retired GT/108 soon after and sold the car in 1969 to a private collector. At the owner's request, Kar Kraft fitted the Roadster with a new Ford 289 cubic-inch V8 and a ZF gearbox. It bounced between a number of owners before resting in the hands of a Pacific Northwest collector who meticulously restored the car and took it to Concours d'Elegance events for 22 years before letting it go. While the car was for sale as of 2014, it has continued to appear at car shows, including 2017's The Quail, A Motorsports Gathering and last year's Pebble Beach show.

This 1965 Ford GT40 Roadster will go under the hammer at RM Sotheby's Monterey sale on Aug. 16 and is estimated to bring between $7 million and $9 million. Monterey Car Week kicks off Aug. 9 and culminates with the prestigious Pebble Beach Concours d'Elegance on Aug. 18.