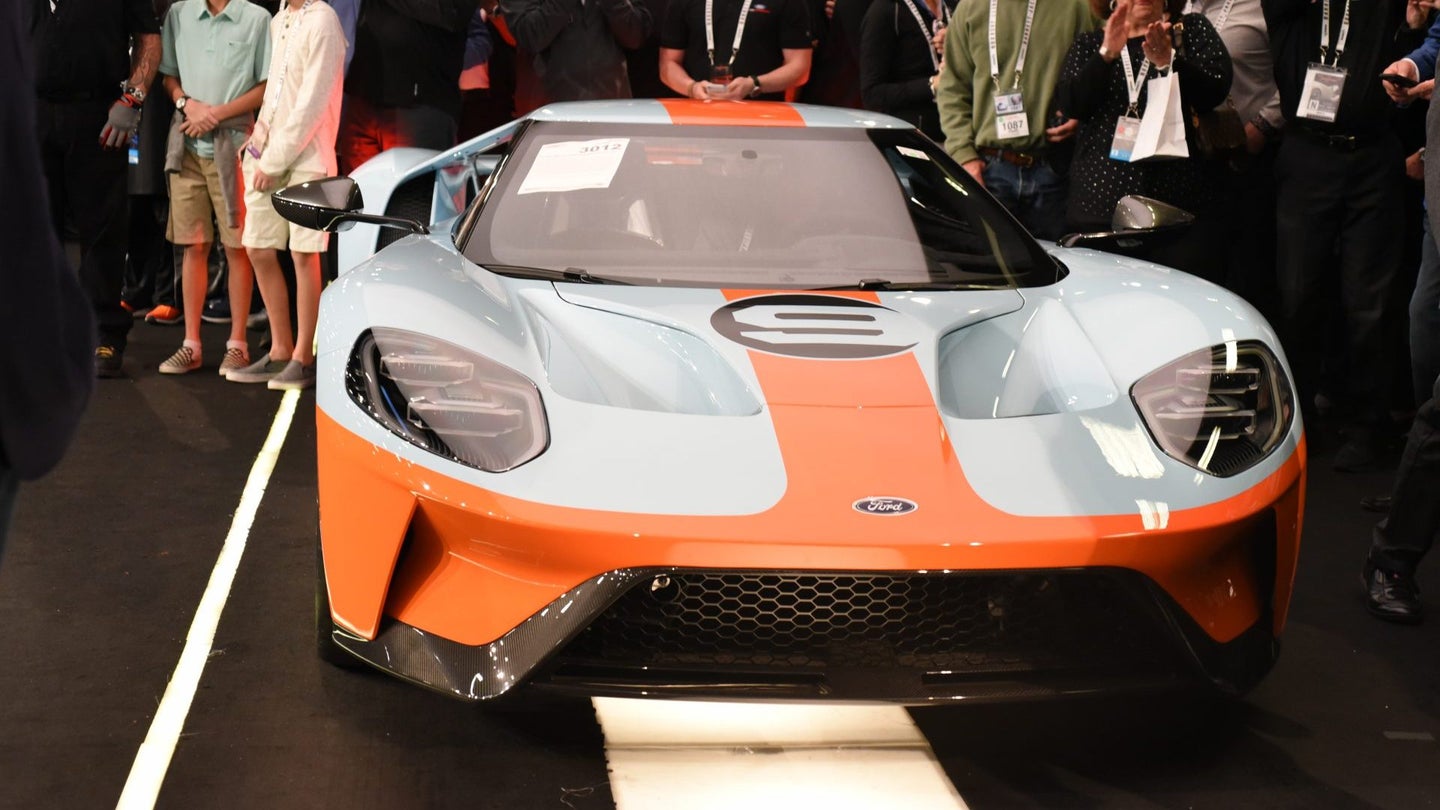 Ford auctioned off its first GT Heritage Edition supercar on Friday at the 48th annual Barrett-Jackson Collector Car Auction in Scottsdale, where the vehicle claimed a winning bid of $2.5 million.

Announced in August, the Ford GT Heritage Edition is mechanically identical to a standard GT, touting 647 horsepower and 550 pound-feet of torque from a 3.5-liter, twin-turbo EcoBoost V6. It makes the GT capable of a 3.0-second 0-to-60 time and a top speed of 216 miles per hour. What makes a GT a Heritage Edition car is its livery, inspired by those of the Gulf Oil-sponsored Ford GT40s that won the 24 Hours of Le Mans in 1968 and 1969.

Its buyer was identified as Rick Hendrick, owner of NASCAR team Hendrick Motorsports. Ford guaranteed that the money it collected from the auction would be passed on to United Way for Southeastern Michigan (UWSEM), which performs community outreach and advocacy. Much of UWSEM's work is done in Michigan's capital of Detroit, where the organization combats homelessness and supports education, among other activities.

"Ford Motor Company has always championed and supported organizations that seek to improve the lives of people and communities who are at risk," proclaimed Edsel B. Ford II. "We're proud to have helped continue this tradition at the Barrett-Jackson Collector Car Auction in Scottsdale. Working with JDRF and United Way of Southeastern Michigan we helped raise much-needed funds and awareness for these two wonderful organizations."

The GT wasn't all Ford auctioned off to reach its takeaway of $3.6 million. It also sold the very first 2020 Mustang Shelby GT500, which itself collected $1.1 million. Instead of UWSEM, this money went to JRDF, a childhood diabetes research group.

Neither of these cars, however, had the most eye-widening hammer prices of vehicles sold at the event. Toyota's first 2020 Supra took $2.1 million for the American Heart Association and the Bob Woodruff Foundation, which aids veterans and service members impacted by 9/11.