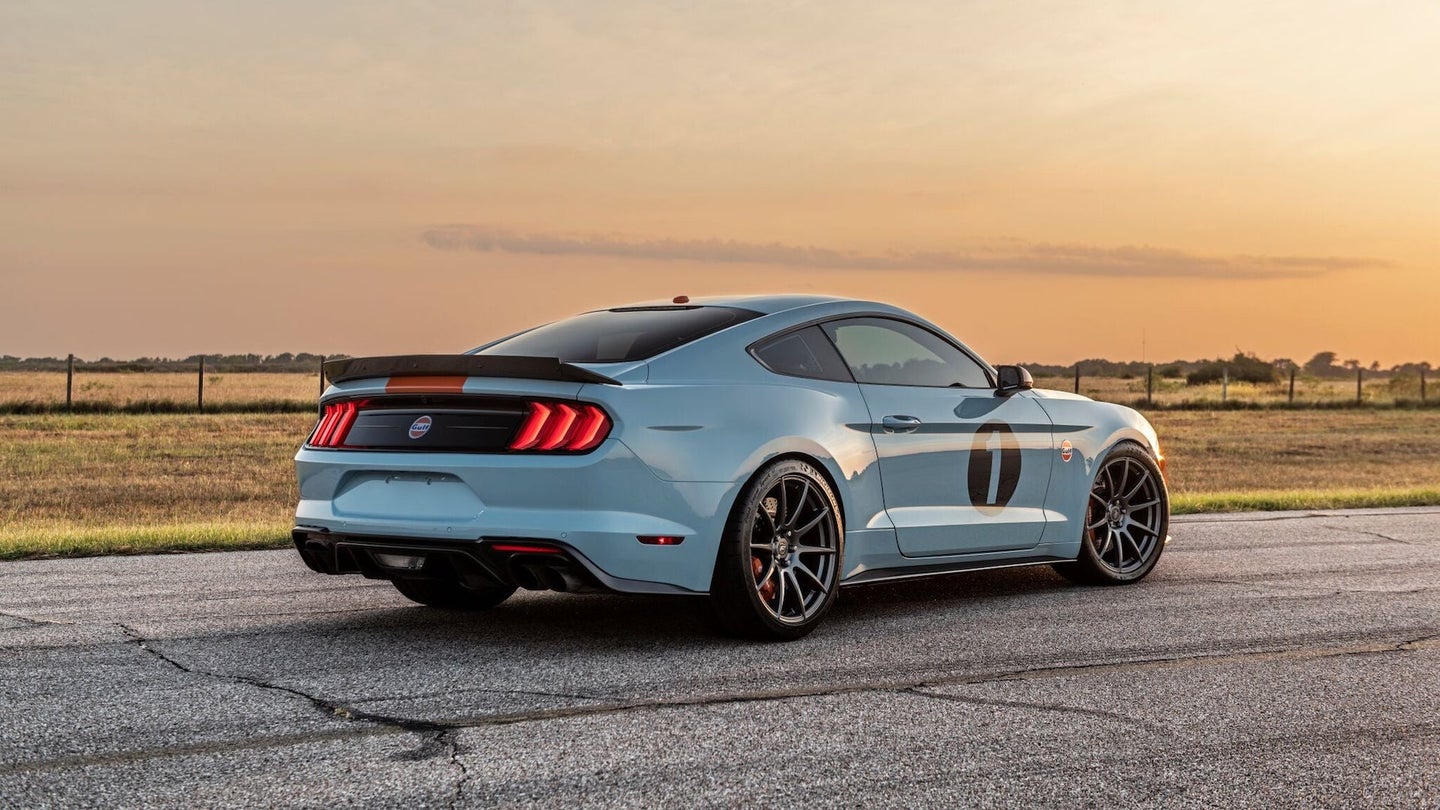 Our nation's Ford dealers war over who can offer the most powerful Mustang off the showroom floor, and as of Monday, they face a new combatant. Brown Lee Ford has entered the ring with an ultra-powerful, limited-edition model called the Gulf Heritage Mustang, which nods to Ford's historic wins at the 24 Hours of Le Mans.

An officially licensed Gulf Oil product, the 'Stang features the classic orange-and-blue livery and is bedecked in Gulf motifs everywhere they can fit. The front fenders, rear valence, seatbacks, and numbered authenticity plaques all bear the logo of the erstwhile petroleum company and sponsor of our favorite sport.

Of course, Brown Lee Ford doesn't try to justify the car's $139,995 price tag with nostalgic branding alone; it brandishes performance worthy of its racing-derived color scheme. Brembo brakes are enclosed in 20-inch alloy wheels, shod in Michelin Pilot Sport Cup 2 tires. Their contact with the pavement is maintained by lowered suspension and downforce generated by functional carbon fiber aero, including a splitter, sills, a diffuser, and a trunk spoiler.

A grille delete increases airflow through the radiator, a necessity for a car generating as much waste heat as this immensely powerful Mustang. Its 5.0-liter V8 features a huge 3.0-liter supercharger, which gulps air down an upgraded intake and crams it through an air-to-water intercooler, and past upgraded injectors, which meter fuel as directed by a custom dynamometer tune. The result? A massive 808 horsepower and 675 pound-feet of torque, respectively 48 and 50 more than you get from a 2020 Mustang Shelby GT500.

But is with worth paying $140,000 for a Gulf Heritage Mustang when you can likely pay less for the probably lighter, better-handling Mustang Shelby GT500? That all depends on whether you want either a convertible roof or a six-speed manual transmission, both of which Brown Lee Ford offers on its built-to-order Gulf Heritage Mustang, and neither of which are available on the hardtop, automatic-only GT500.

The choice, if you're in the market for a muscle supercar, is yours.

We’d call it the world’s most unassuming nine-second car if not for the giant Mickey Thompson drag slicks and parachute out back.