It sat there for two days and took 28 hours of work to retrieve. 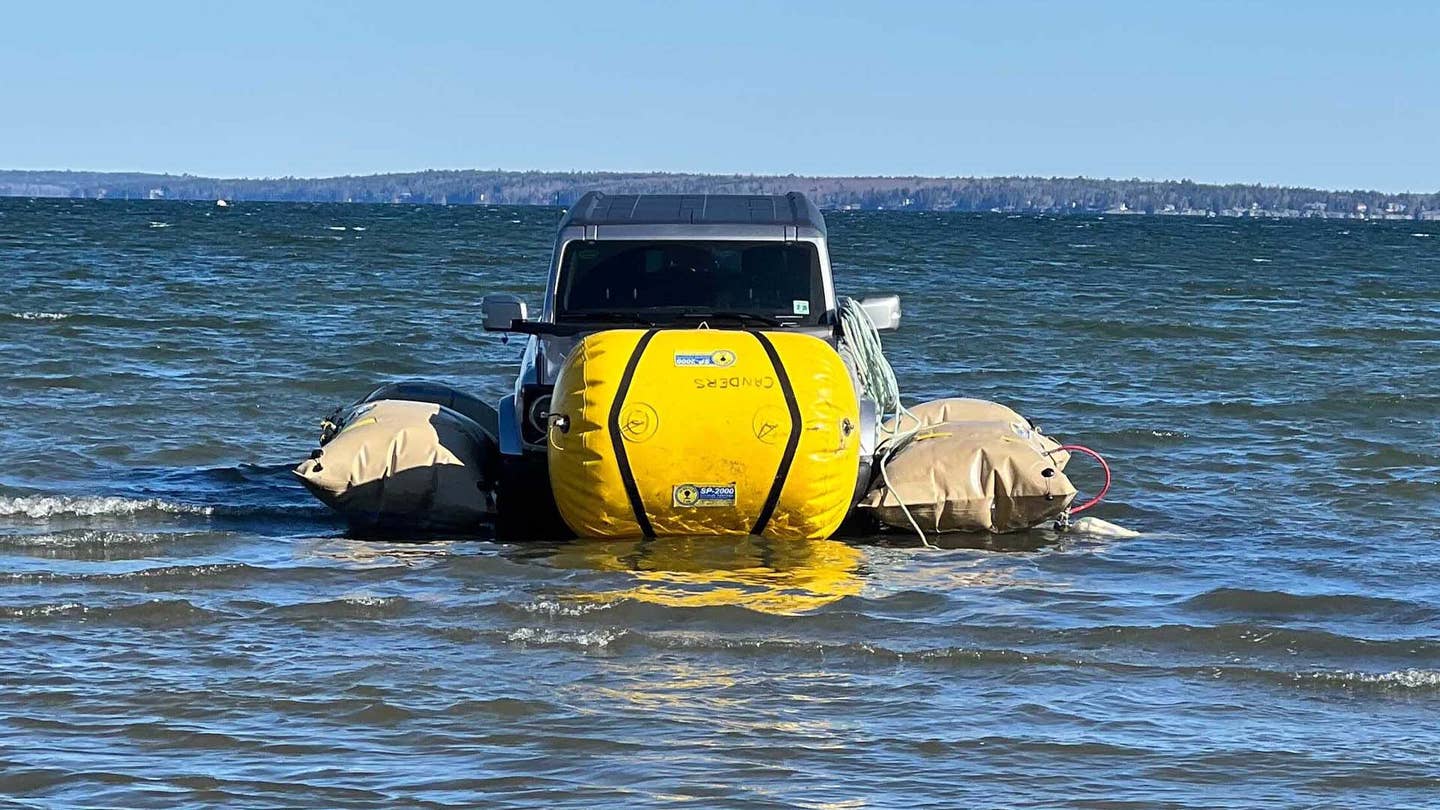 If you've been on the internet these past few days, you might've seen an underwater Ford Bronco. That thing was very stuck in a bay in Maine; so much so that it couldn't be pulled out with a pair of trucks and their trusty tow straps. I spoke with Les Foss at Island Towing, who was on-site for the job, and as you're getting ready to find out, it was far from easy. But around 5 p.m. on Monday, they finally got it.

It involved a diver that was contacted by the Department of Environmental Protection who then reached out to Foss. They agreed that inflating a bunch of airbags underneath the Bronco was the best way to get it out, so that's exactly what they did. This required strategic positioning and timing to make sure the tide was high enough to carry the rig.

"We attempted three different tides; the first tide, they didn't call me until it was too late," Foss explained. "Then we attempted the second tide and we weren't really prepared for the vehicle to not roll on its own. We went back the third time knowing the vehicle wouldn't roll on its own and it was like pulling a frickin' boulder out of the ocean. We tried and tried and it just fought us back as hard as it could. We decided that we had two options: One was a diver with bags, or a barge with a crane and lift it onto the barge and take it to a dock someplace."

This trial and error meant lots of hours on the job—28 altogether.

"It was 12 hours [on Monday] and with the tides prior to that, it was another 16 hours," Foss noted.

So, just how do you go about floating a nearly 5,000-pound SUV when it's caked in mud?

"Together with the help of one of my best friends, we went out and put about a 10,000-pound bag lift on it," Foss continued. "They floated it back over to where the bar is that goes back to Bar Island, and from that position, I was able to get a tow truck there. That was a full-day process; we started at 6:15 in the morning and when we were all done, by the time I got back to the shop and unloaded, it was just after 5 p.m."

Foss told me he couldn't get a wrecker within 1,500 feet of the Bronco before it moved. You can see in the aerial photos that it was way out in the mudflats, far from the path where 4x4s normally travel during low tide. You can't blame the driver for wanting to have fun with his truck where everyone else was driving, but when they strayed off the path, that's when they found trouble.

The Bronco in question is an Outer Banks model without the Sasquatch package, meaning it was on normal road tread tires instead of 35-inch mud terrains. And even though it's got leather-trimmed seating, there's no chance I'd go through the trouble of salvaging the interior. Based on the photos Foss sent over, it's still soaked and likely will be for weeks. Nothing is visually wrong with the upholstery, but you can see a portion of the center console popped out—and don't count on the infotainment working.

Regarding what's next for this Bronco and its owner, the only thing they can do now is wait.

"It's in my yard right now and it'll stay there until the insurance company decides to pay for the charges and come and get it, or we tow it off to an auction yard or salvage yard—someplace else," Foss elaborated. "Until I get the mathematics figured out on it, it doesn't go anywhere."

He added, "I have a lot of people that I have to pay, so I have to get the invoices for all of them before I bill the insurance company."

Foss spoke with a pretty positive tone about the whole ordeal, and this isn't his first bay recovery by any means. He told me his most recent job like this was on Dec. 29, 2021, and they even keep a running tally of how many they do each season. They apparently mark them in a list titled "Beach Tows," which should tell you how often people fall victim to the elements—and their own ill-fated bravery.

There’s a Ford Bronco Floating in a Bay in Maine Because Some Fool Drove Too Far Out [UPDATE: It’s Out]

It got stuck in a sandbar during low tide and now that the water’s up, they’re trying to float it out.