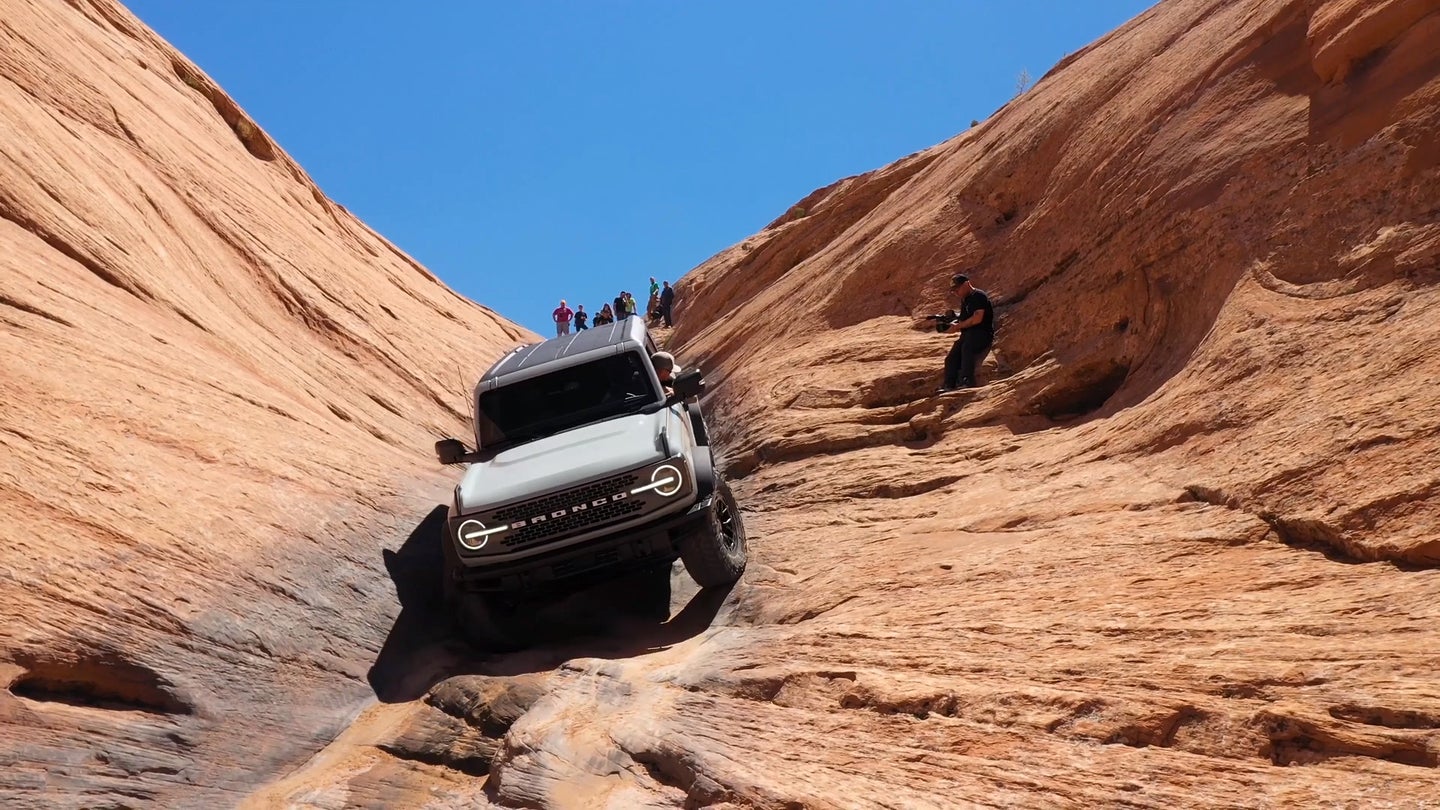 Hell's Gate is one of the more intimidating challenges along Moab's famous Hell's Revenge trail. Consisting of a steep ascent up a valley of rock, there's plenty of traction on offer if you've got the suspension articulation for it, but the sheer verticality of the climb is enough to scare away the timid and inexperienced, and picking the wrong line can be disastrous. It's why we regularly feature videos of seemingly unsuitable vehicles attempting the climb; you might be surprised by what a Kia Sorento can do in the right hands. And I think it's fair to say you'll definitely be surprised by this clip of pro off-road racer Loren Healy climbing Hell's Gate in a 2022 Ford Bronco—in reverse.

As a five-time champion of the Ultra4 series and two-time winner of the King of the Hammers, Healy has some serious off-road credentials. Thus, we imagine driving a well-equipped modern four-wheel drive around Moab just doesn't pose the same challenge to Healy than it would for the average mere mortal. A clean drive up Hell's Gate is always impressive, of course, but watching it done in reverse is a heck of a stunt, and Healy is one man who is more than qualified for the job.

Slow and steady, Healy works the Bronco up the slope, rolling back down a few yards here and there to adjust the line where needed. With the steering wheels at the back instead of the front, and visibility compromised by having to look out the rear window, it takes a little more finesse than doing the climb in the usual direction. Despite the challenges, the run is remarkably without drama, with the Bronco looking composed and controlled during the whole ascent. From bottom to top, Healy completes the full climb in three minutes on the nose.

At the end of the day, Hell's Gate is an obstacle that rewards careful driving and mettle more than outright equipment. Even a tired Ford Super Duty will get you up if you know what you're doing. We've seen the Bronco Sport climb Hell's Gate, too. It does bear noting that the Bronco's baby brother and others mentioned all did the climb in the more typical forward direction, however.

Hell's Gate trail might not be the hardest obstacle on offer in Moab, but it's always fun to see experienced drivers pulling off these feats of skill. With the Bronco set to ship in real numbers later this year, we look forward to seeing the much-anticipated offroader pulling wild stunts on trails all over the country real soon.