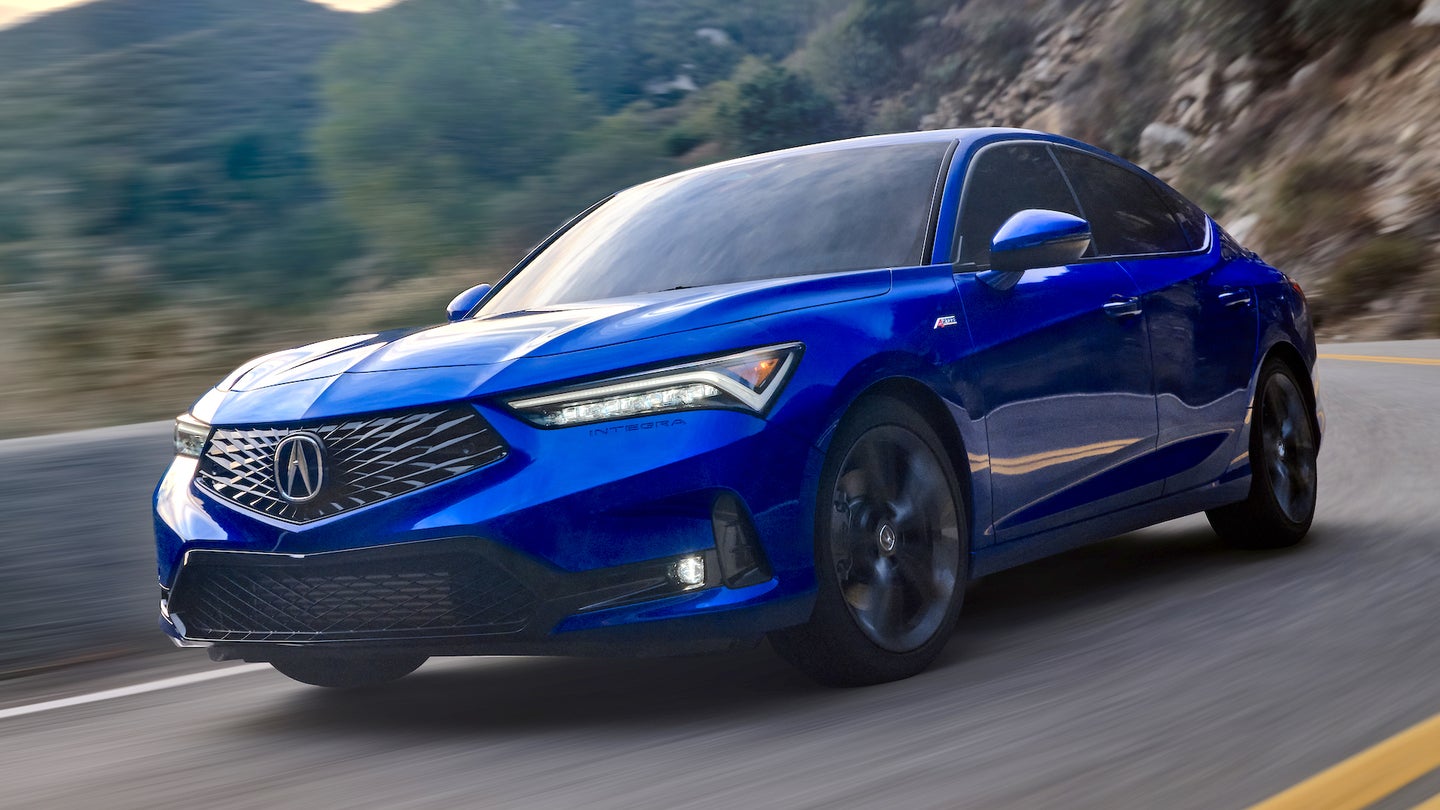 You saw the prototype; now, here's the barely altered real thing. This is the 2023 Acura Integra, and it's here to resurrect that legendary nameplate and make a play for your entry-level luxury car dollars. We hope you like Civic guts, liftbacks, and NFTs. (More on that later.)

To start, here are the meat and potatoes. Just like the Honda Civic Si on which it's clearly based, the new Acura Integra is powered by a 1.5-liter turbocharged four-cylinder. It makes 200 horsepower at 6,000 rpm and 192 pound-feet of torque from 1,800 to 5,000 rpm—those stats, again, are identical to the Si. This car can be had with a six-speed manual gearbox or—cue gasp—a gear-simulating continuously variable transmission. The CVT, in fact, is the standard transmission, meaning it's the sole one available on the base trim Integra while only the A-Spec models can be optioned with the manual. New, $30,000 Japanese sport sedans and CVTs. Name a more iconic duo.

However, the Acura badge at the front can apparently light up, so there's that.

Speaking of, precise pricing has yet to be announced but, as the company has said previously, this car will start at "around" $30,000. This car, mechanically speaking, may just be a fancy Civic Si but it's not like it'll actually cost that much more than the Si, which already starts at around $28,000. As for its status as a sedan, I use that term a little loosely because the new Integra, just like the original, will be a liftback in which the rear window opens up with the trunk lid, a bit like a mini Kia Stinger.

Acura, of course, hopes it'll drive a bit like a mini Stinger too, boasting of the car's stiff chassis, fully independent suspension, and a new coil type exhaust that supposedly makes the Integra sound as sporty as it drives. Manual-equipped cars will come with auto rev-matching and a helical limited-slip differential. Comfort, Normal, and Sport driving modes alter throttle, CVT calibration when the CVT is equipped, steering feel, and, of course, how angry the colors in the gauges are. The top A-Spec with Tech Package model gets a custom Individual drive mode that lets you configure these things independently. Also reserved to this top trim are adaptive dampers that change according to drive mode.

A little curiously, Acura's release literature for this car did not explicitly specify whether the Integra is front-wheel-drive or all-wheel-drive. However, I reached out to the automaker and a spokesperson confirmed to me that this generation of Integra would indeed be FWD-only.

Stepping inside, anyone who has seen or spent time with the current Honda Civic will recognize a lot of the same hardware and switchgear, albeit presented in a slightly more luxe package. The nine-inch touchscreen (no ridiculous Acura True Touchpad, folks), the digital gauge cluster, the steering wheel, the superbly clicky HVAC controls, the meshy air vents, and their little adjustment sticks all look lifted out of the Civic. Depending on your outlook, this can either be good or bad. Good because all of those things are, in reality, quite well done in the Civic, but bad because, well, if you're spending the extra dough on the luxury version of a car, it'd be nice to get as many actual luxury digs as possible, whatever that might entail.

In any case, the Acura Integra comes standard with Apple CarPlay and Android Auto as well as standard heated, synthetic leather front seats. Optional extras include a head-up display, wireless charging, and 16-speaker ELS audio—eight speakers are standard. However, the most notable interior feature, if you ask me, would be the manual shift knob that's nearly identical to the one found on the Honda S2000, right down to the font of the little numbers on top.

Reservations for the 2023 Acura Integra open today at 1 p.m. ET, and first deliveries are scheduled to happen in the spring. In exchange for their vehement patronage, the first 500 reservation holders are getting—drum roll, please—a limited edition NFT, following the Alfa Romeo Tonale in integrating non-fungible tokens into its release strategy. The Integra's base NFT received upon reservation will turn into a unique Integra NFT once the car is delivered, with the images designed by 3D artist Andreas Wannerstedt.

As one final detail that may or may not rile up the JDM Integra diehards, this new Integra will—like the rest of Acura's current lineup—be built in Ohio.

Got a tip or question for the author about the new Integra? You can reach him here: chris.tsui@thedrive.com.