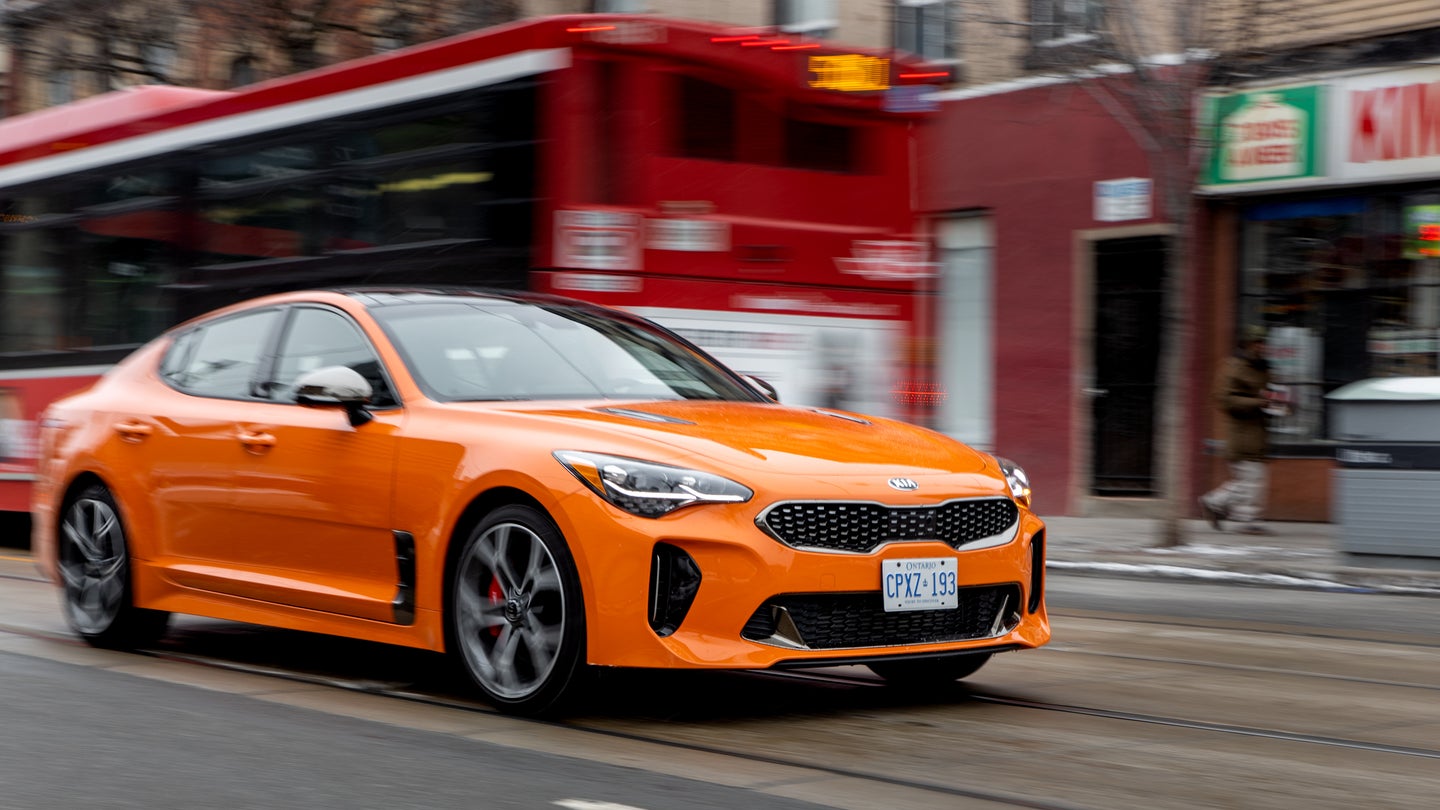 I realize this will immediately (and accurately) brand me as a non-follower of professional sports but I never understood the phenomenon of blindly and vehemently supporting local teams. As a child, I naively assumed that, as a requirement, all of the players on any given NHL/NFL/MLB/NBA team were actually from the city or region said team represented. As a long-time Toronto resident, I can remember the moment in my early teens when I learned that, in reality, a good number of the dudes in Toronto Maple Leafs jerseys skating around the Air Canada Centre every other night weren't even Canadian and thinking, "Wow, this whole thing is even more pointless than I thought." Throughout the years, guys like Mats Sundin and Phil Kessel were talked about like local heroes—until the Winter Olympics rolled around, at which point, they ironically and temporarily became the enemy.

Of course, as an adult, I get it now. Professional sports do not exist to find out which municipality happens to produce the most skilled athletes. Professional sports exist to entertain and make money. Like pretty much every other industry, loyalties shift, players get poached, and contractors might even work for more than one "team" at a time. It's true in racing, too.

It's also true with automotive engineering. I'm here to tell you that if you were a fan of circa-2001 BMW (arguably the closest the automotive industry has to the 1995-1996 Chicago Bulls), you should really be a fan of the Kia Stinger because it's been concocted by a dude who might just be the Phil Jackson of building sporty sedans: Albert Biermann. As you may or may not already be aware, Biermann headed up BMW's high-performance M division for many years—some would reasonably argue the firm's best years. In 2015, however, he moved on to lead vehicle testing and high-performance development for the Hyundai group, presumably after the auto conglomerate backed a huge dump truck full of Korean won up to his home.

A couple of years later, the Kia Stinger—a long-legged, four-door, hatchback grand tourer—came on the scene and was widely recognized to be the one Kia product that carried Biermann's ex-BMW engineer DNA most loudly and proudly. And, as it turns out, not much has changed for this 2021 model because it's a fantastic driver's car that also happens to be quite practical and good-looking. So, sort of like a late-'90s, early '00s BMW.

Oh, and the tester Kia supplied happened to be bright orange. As everybody knows, there's no such thing as a bad car that's also bright orange.

The 2021 Kia Stinger GT Limited, By the Numbers

Not a Regular Kia

Even without the look-at-me paint, the Kia Stinger is a remarkably good-looking vehicle. It's devilishly long, low, and well-proportioned. This doesn't come across very well in pictures but in person, its rear fender haunches are properly bulbous and I love the fact that you can see them in the mirrors when behind the wheel. The backs of said mirrors as well as the long and thin sword-like trim that stretches from the top of the doors to the sides of the rear window are finished in dark chrome, adding an appropriate amount of class without being tacky. 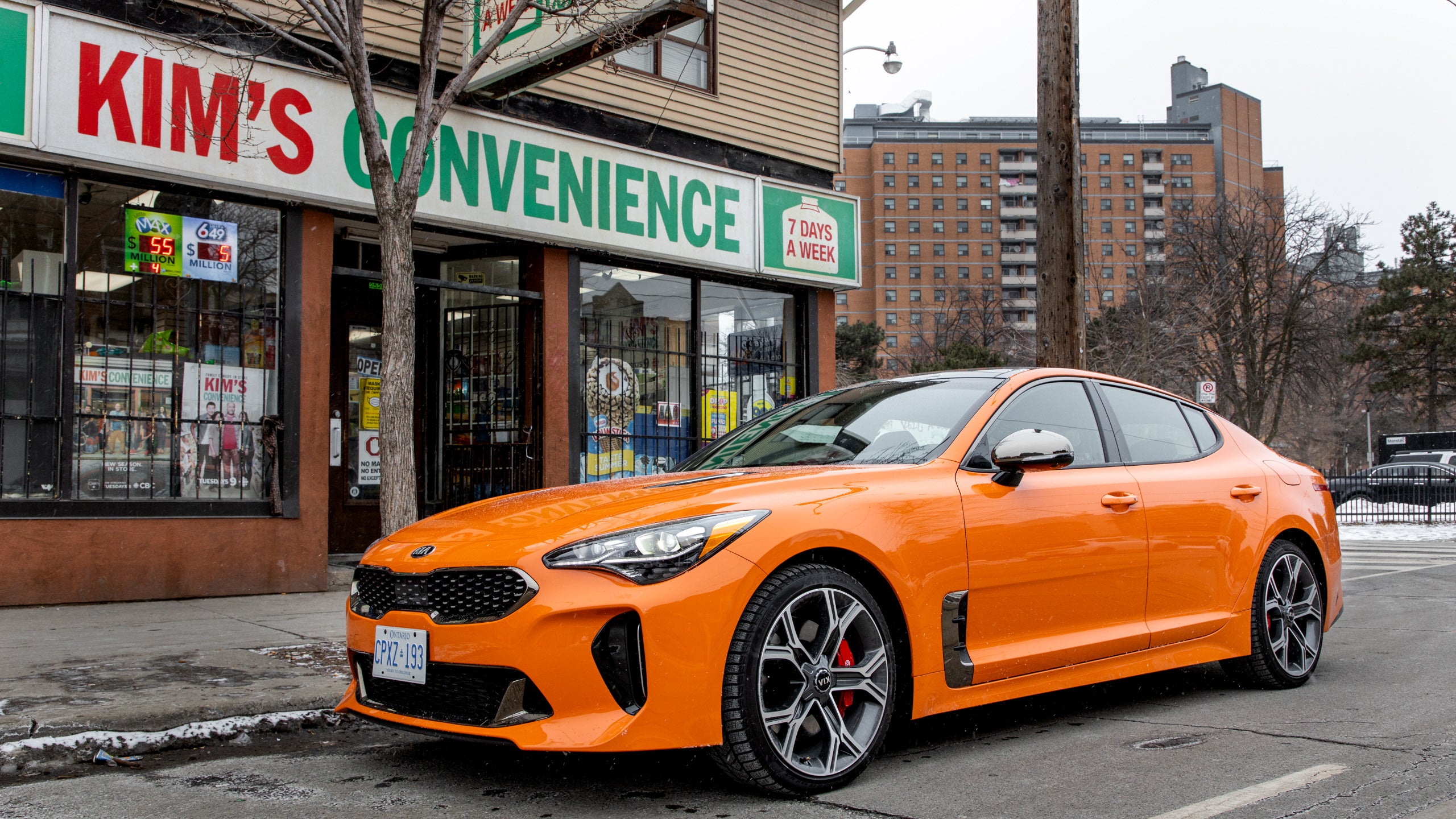 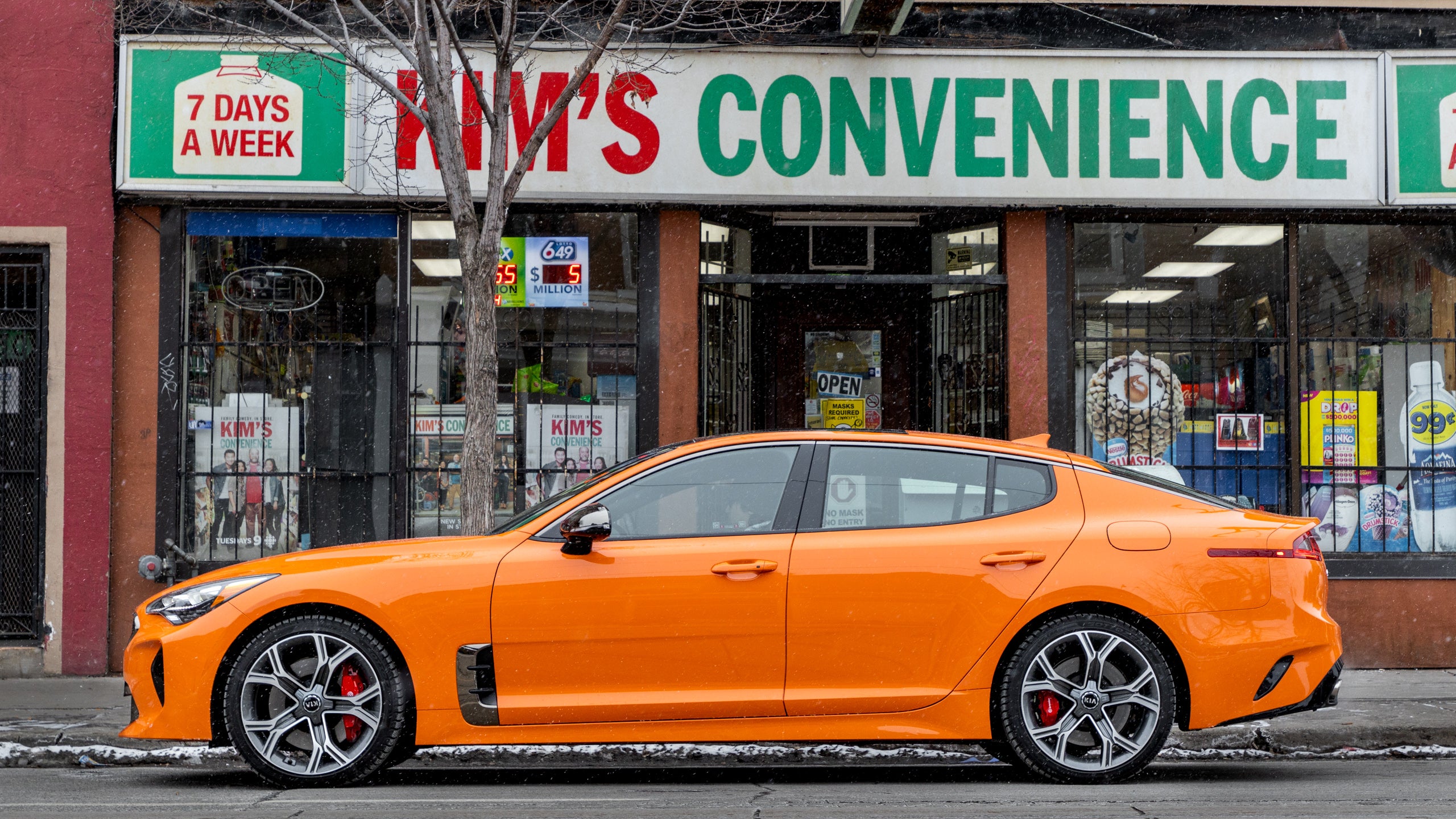 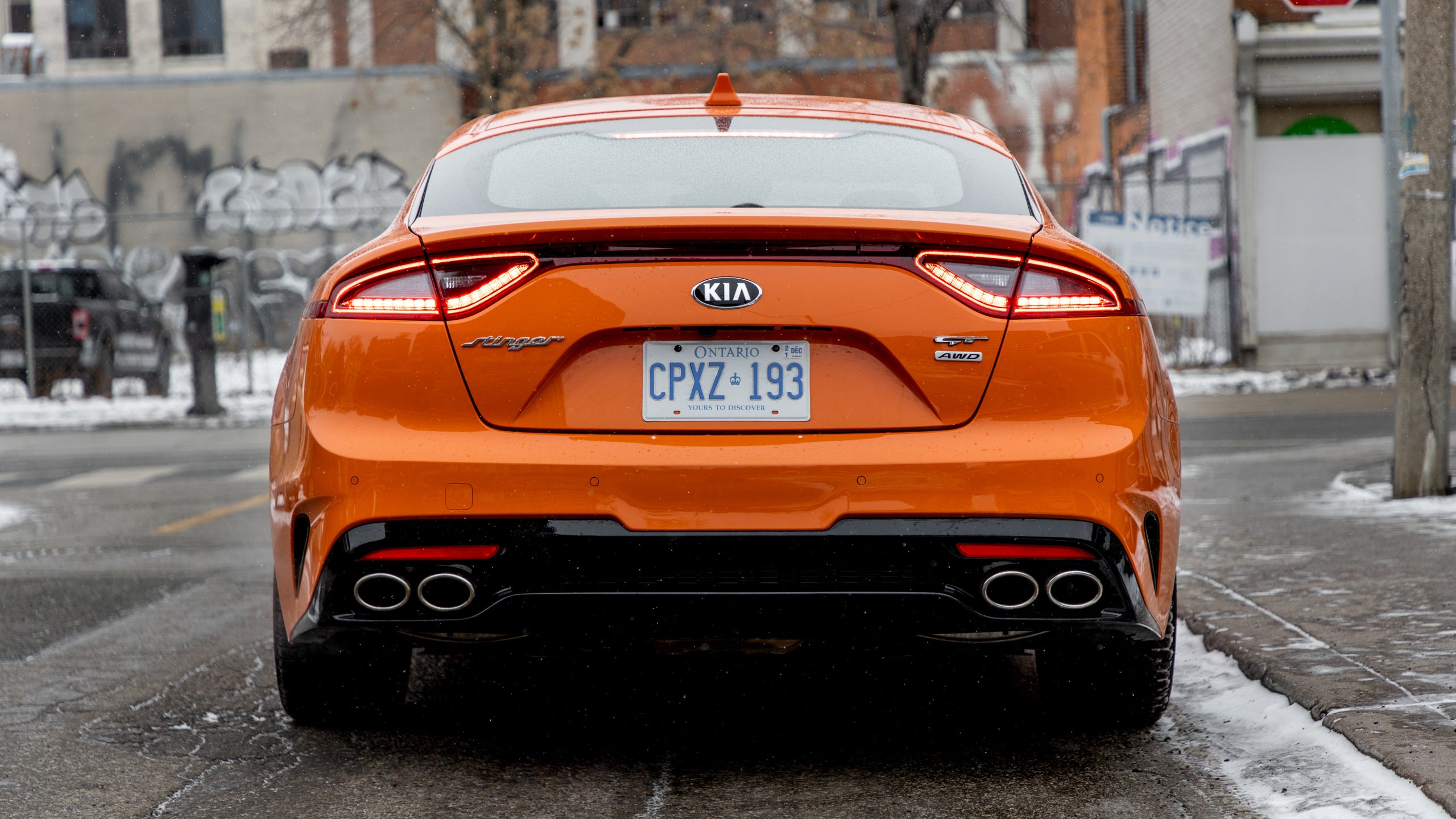 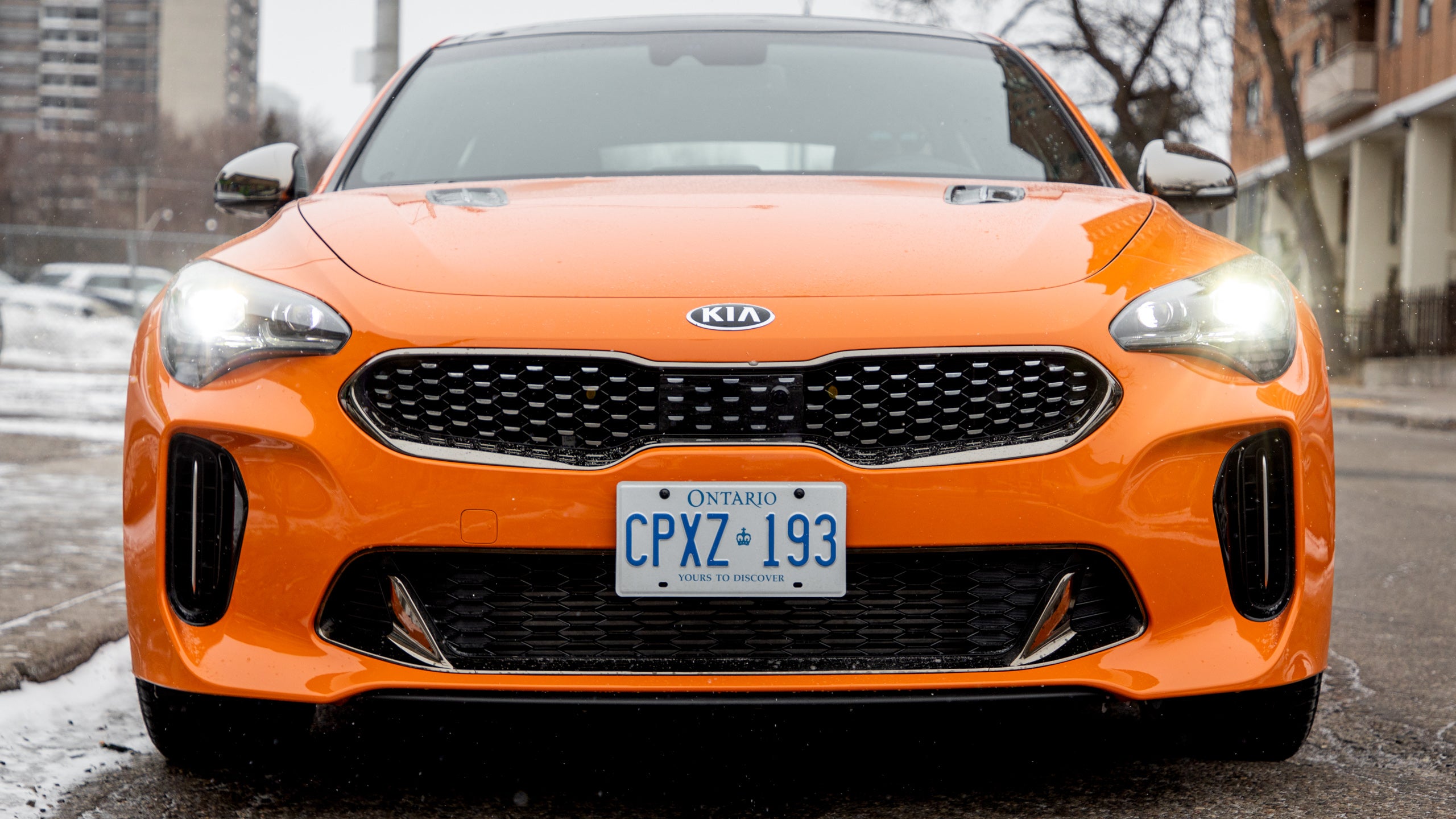 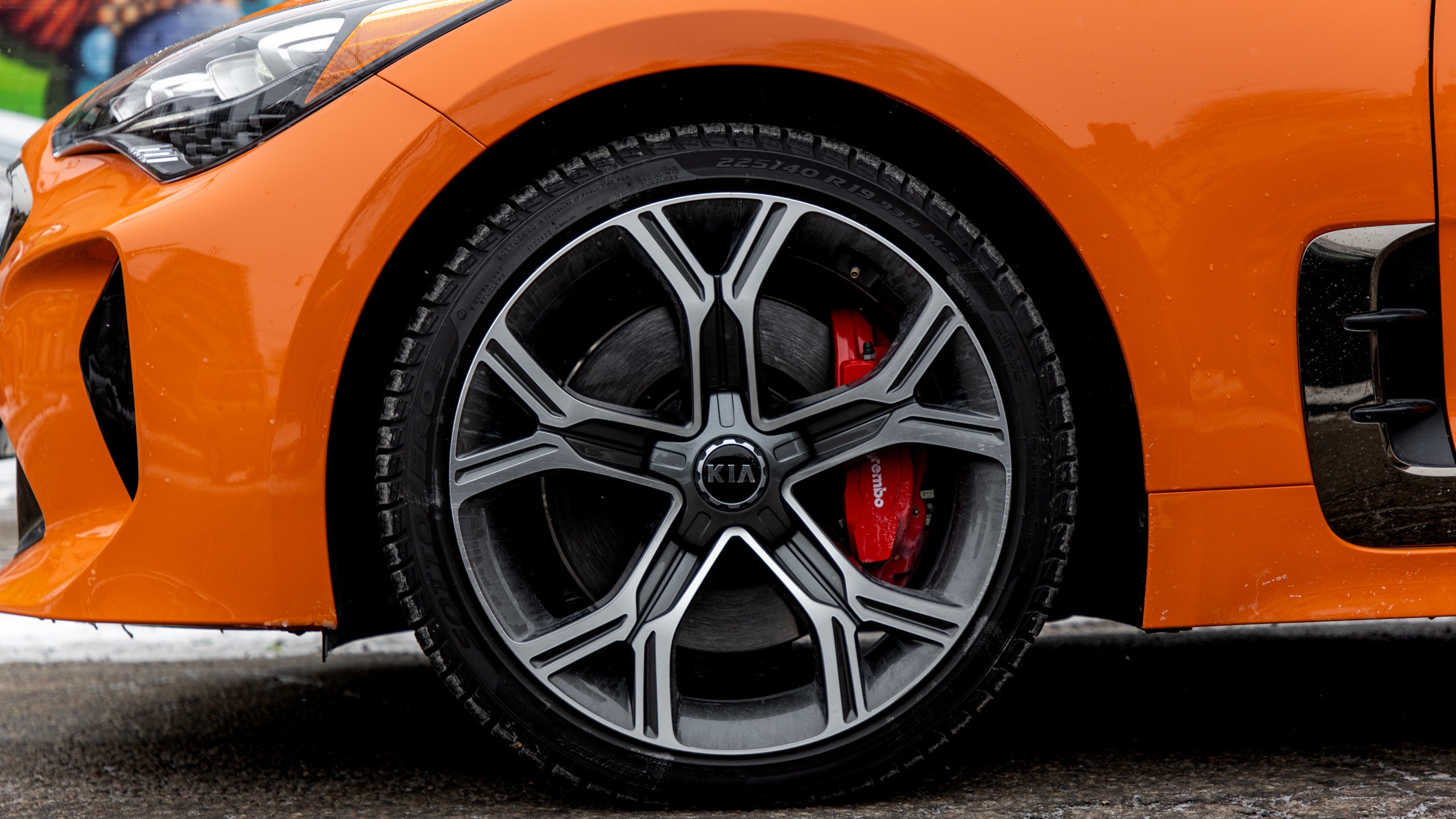 By the way, this isn't the recently-revealed 2022 Stinger facelift. It's a 2021 version, so it still rocks the company's old badge. Casual passersby and other motorists will still eventually know what's up but on exterior design alone, the Stinger looks more special than that badge might suggest and does a great job of silently letting others know that it isn't just some stretched-out Forte. I'll get my hands on the upgraded '22 Stinger as soon as I can, but the pre-facelift model hardly disappoints.

Climbing inside its low-slung cabin, the Stinger's interior is a mixed-bag of surprisingly upscale materials and lower rent switches a cynic might more readily associate with the Kia brand. This GT Limited car features genuine aluminum surrounding the gearshift and cupholders. The headliner and inside of the A-pillars are a soft, suede material and there's stitched leather on the door cards. At the same time though, the buttons and knobs underneath the turbine-like air vents controlling the infotainment and HVAC are unapologetically plastic and would not feel out of place on a car costing one-third of the Stinger's price. 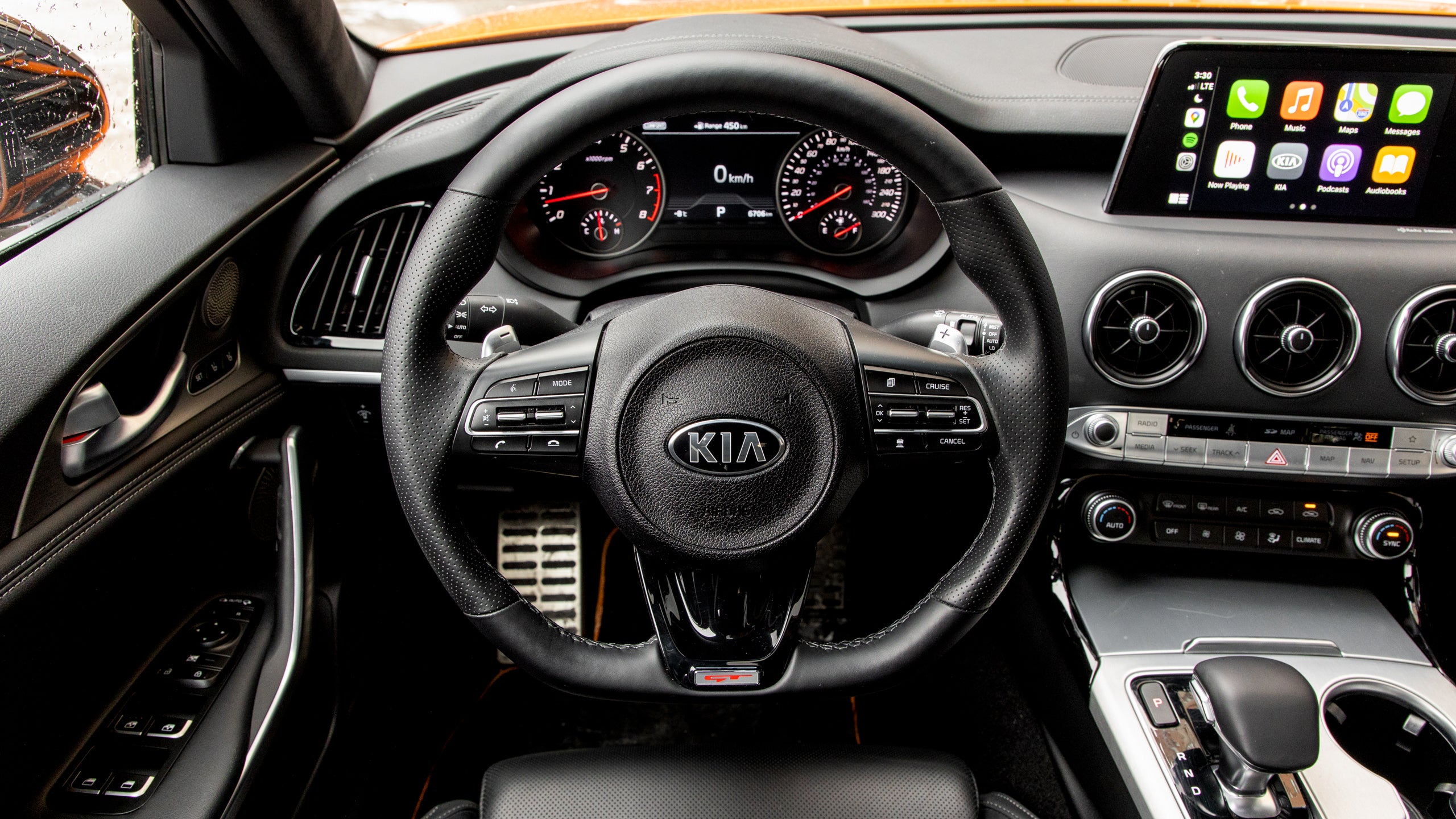 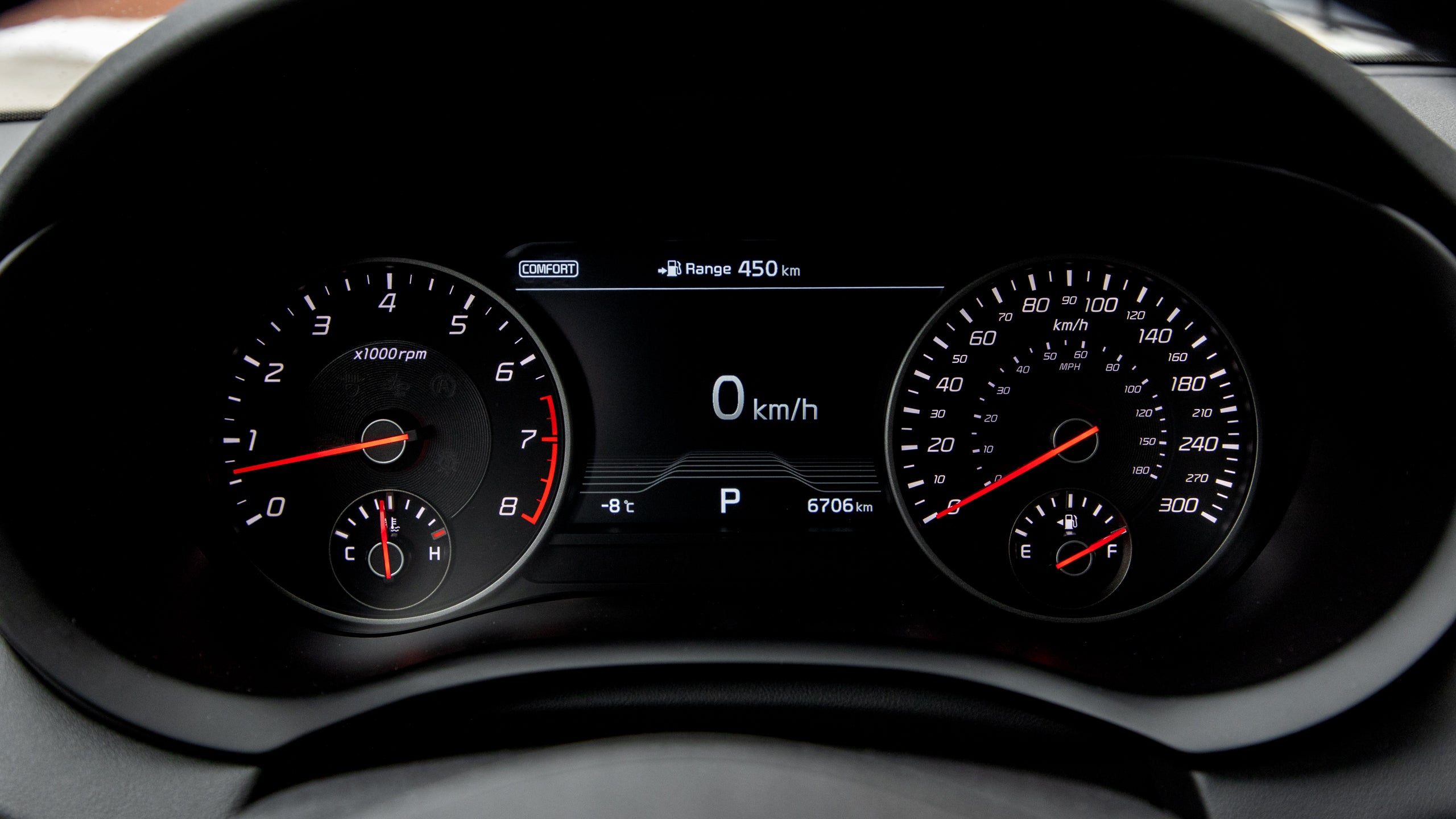 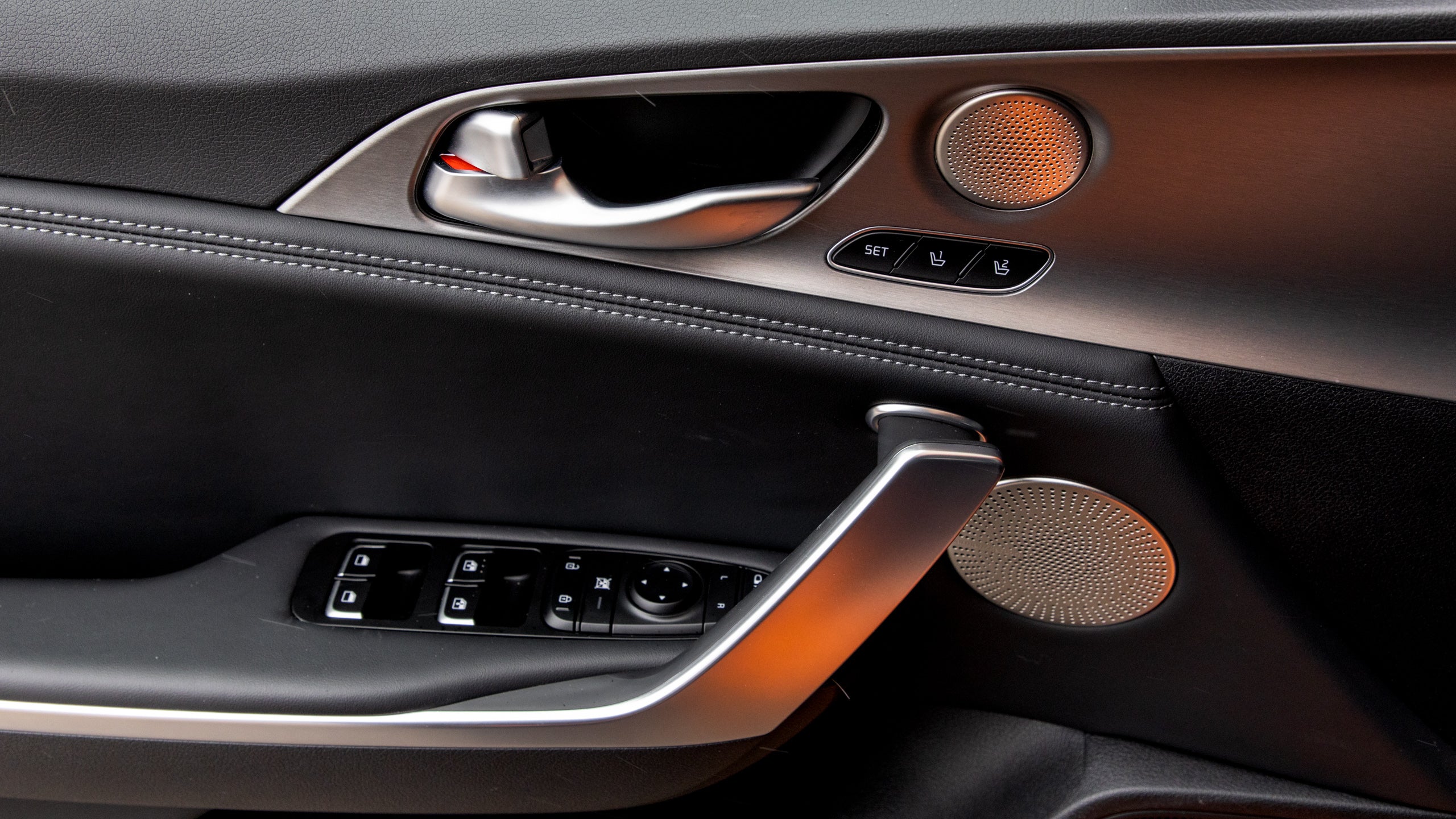 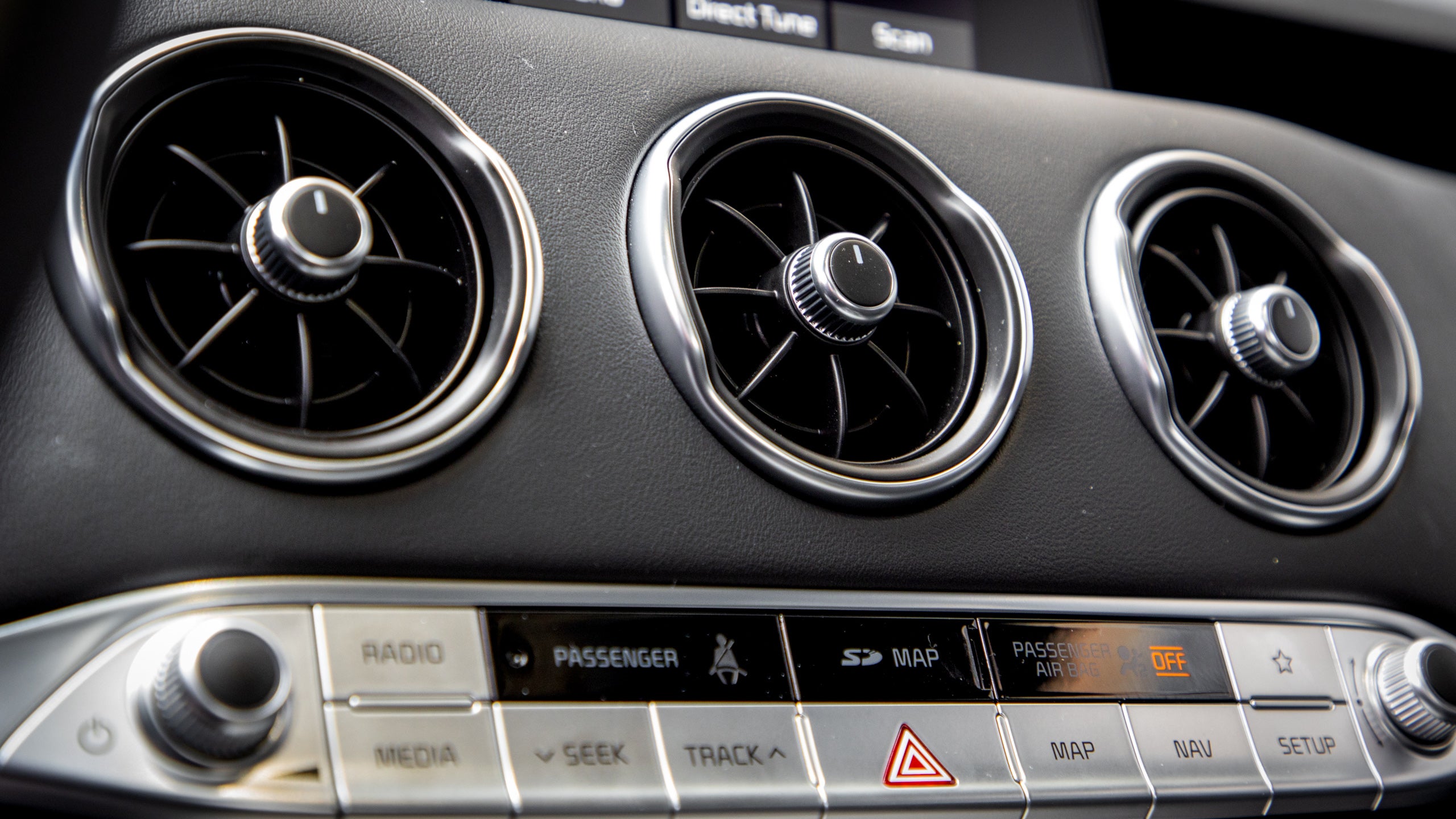 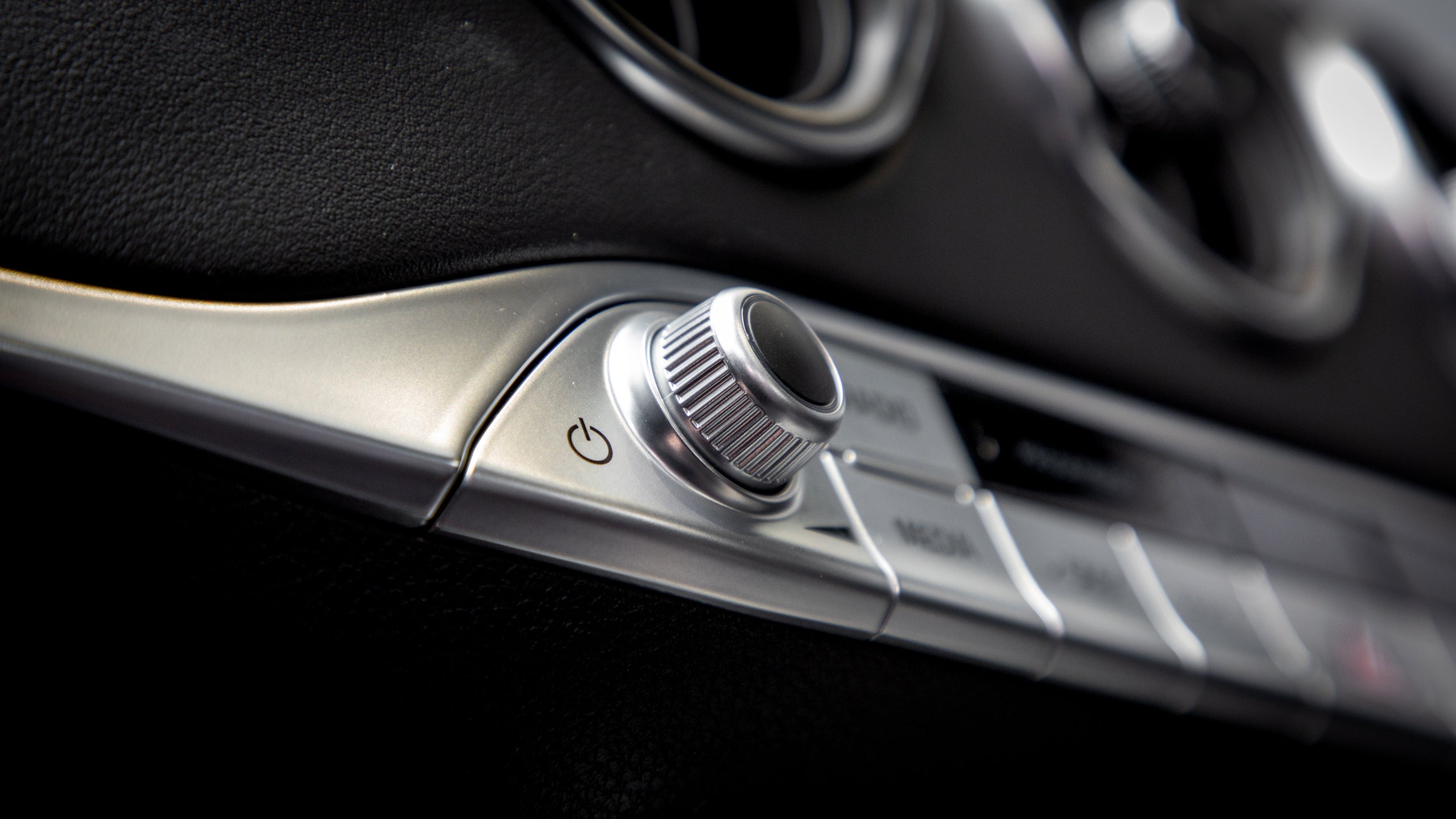 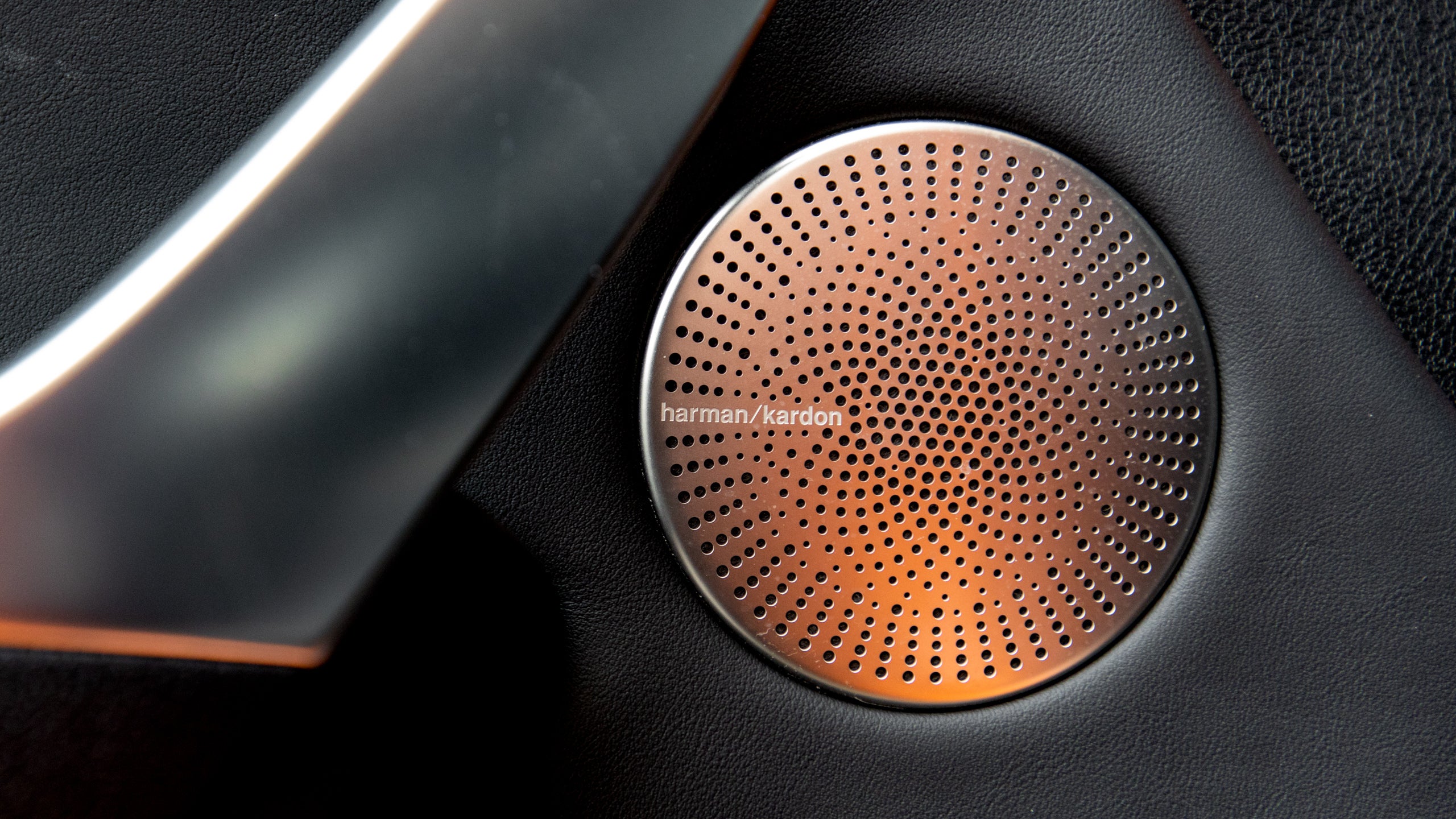 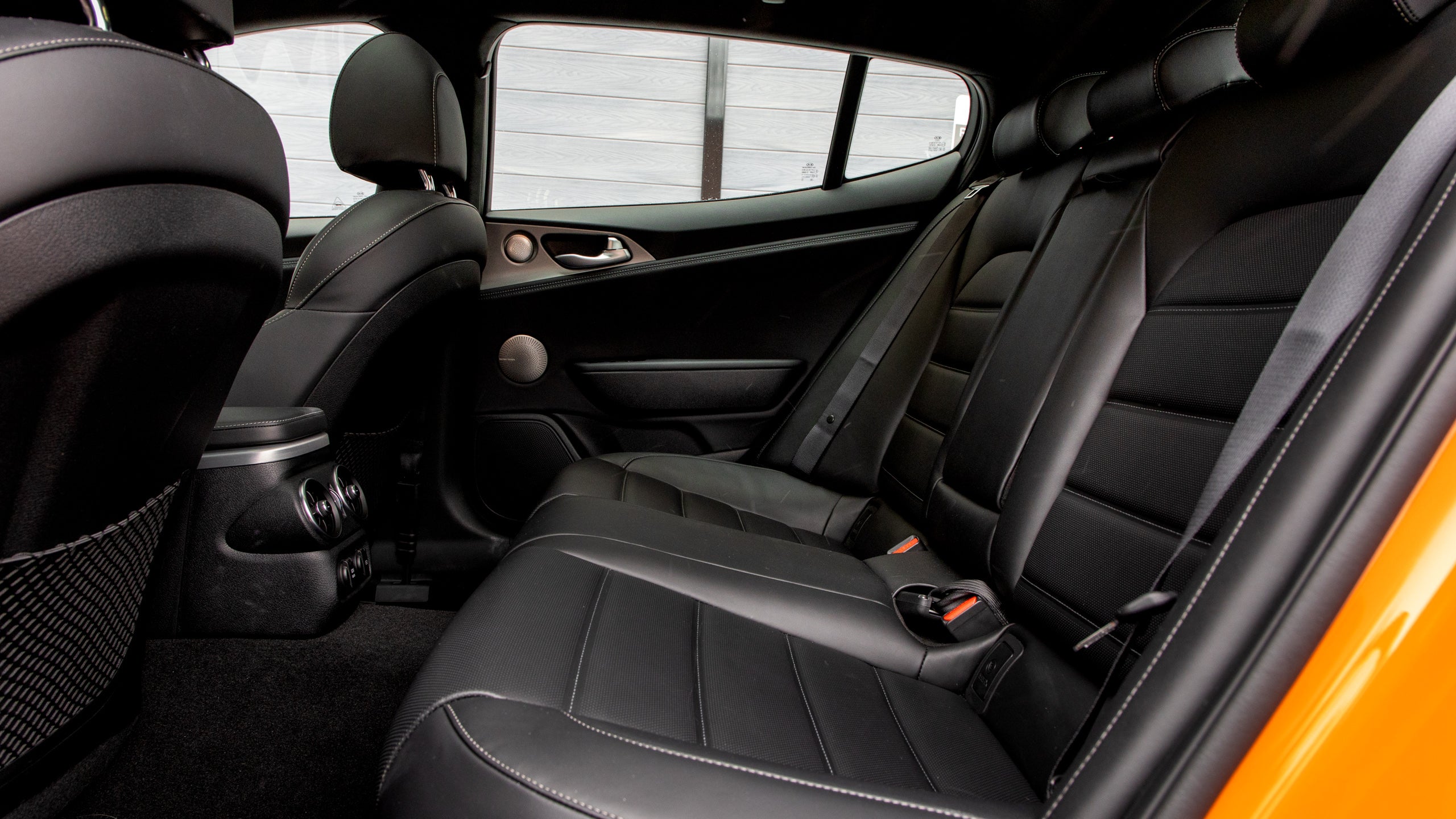 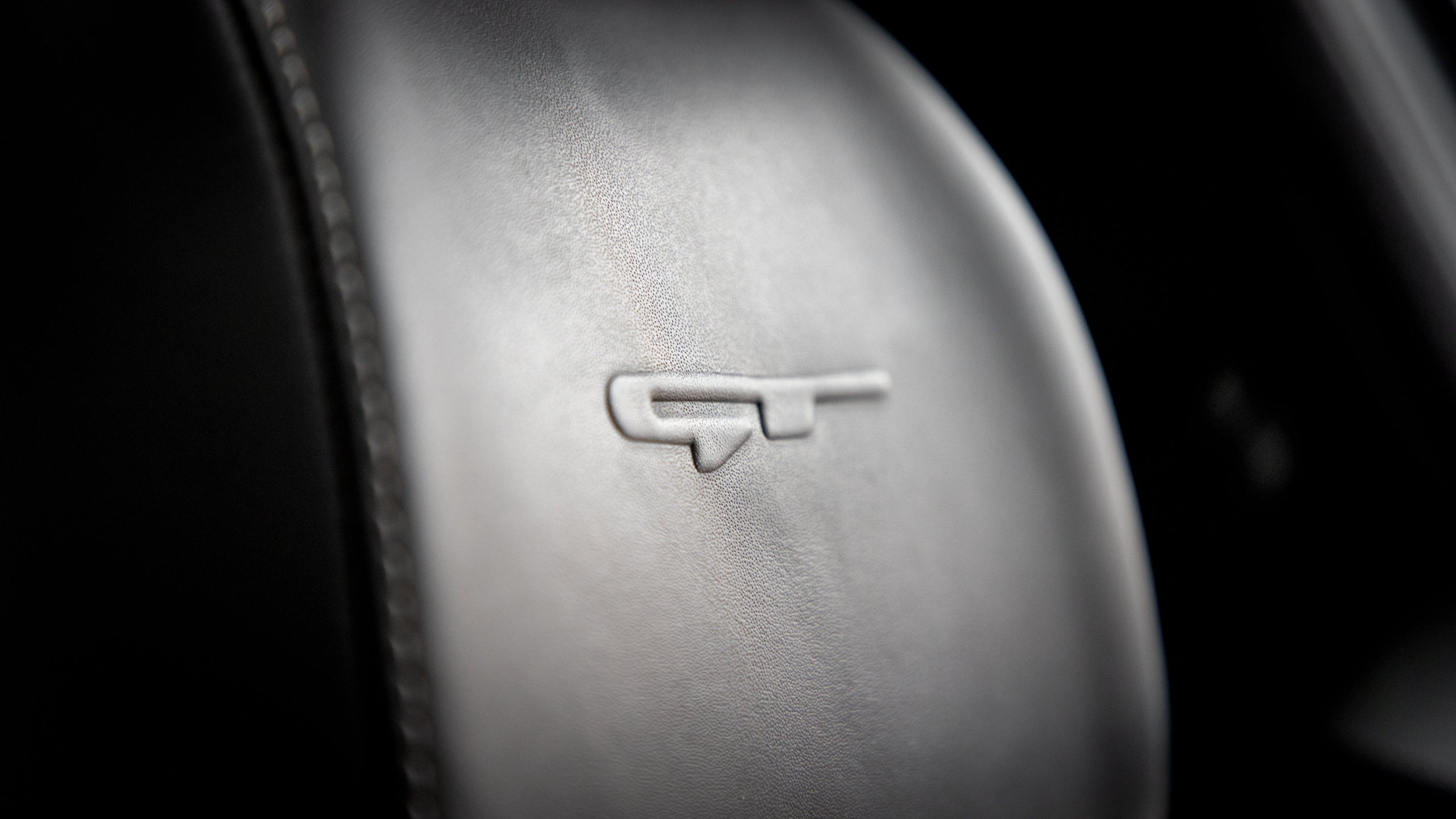 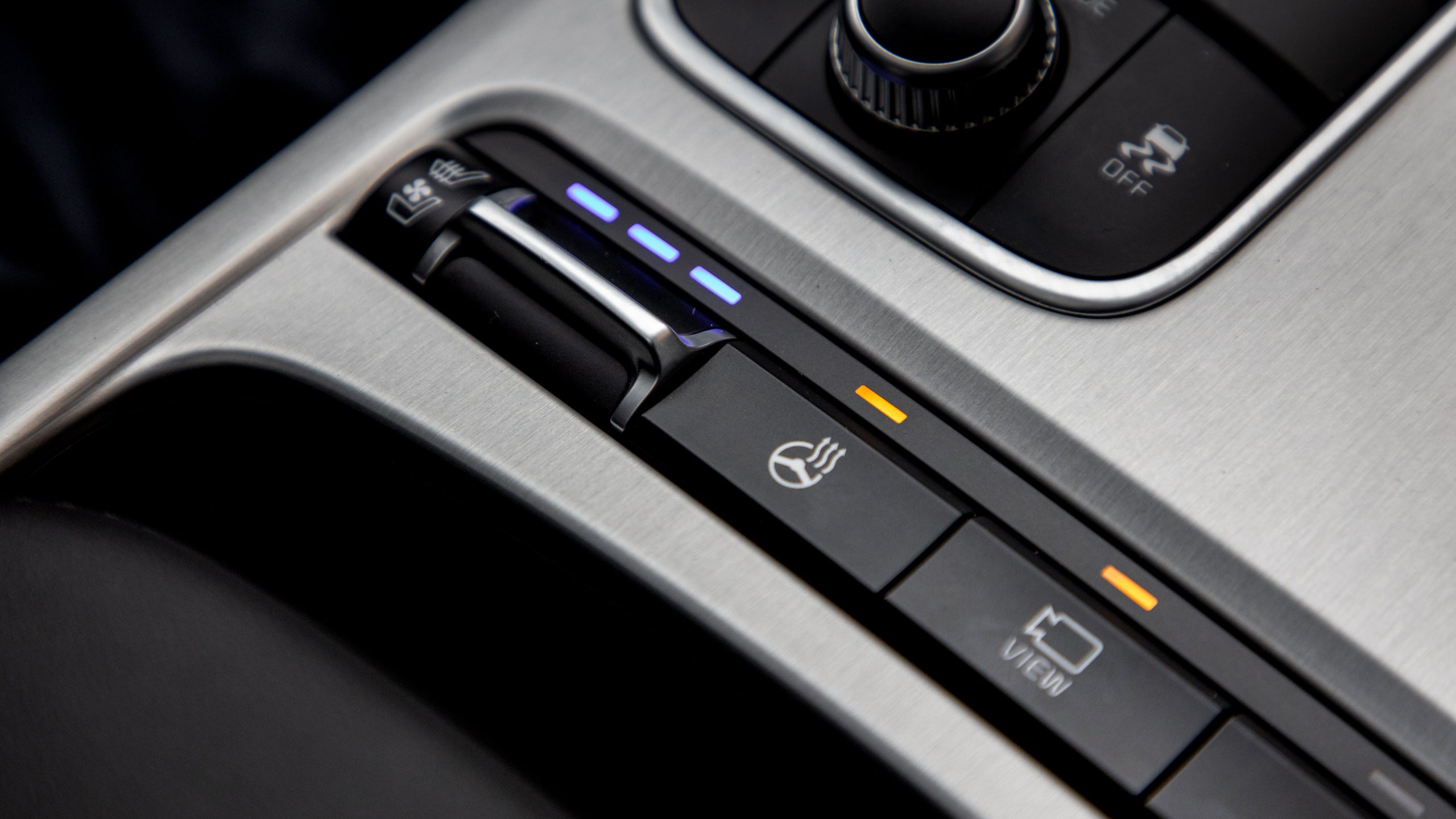 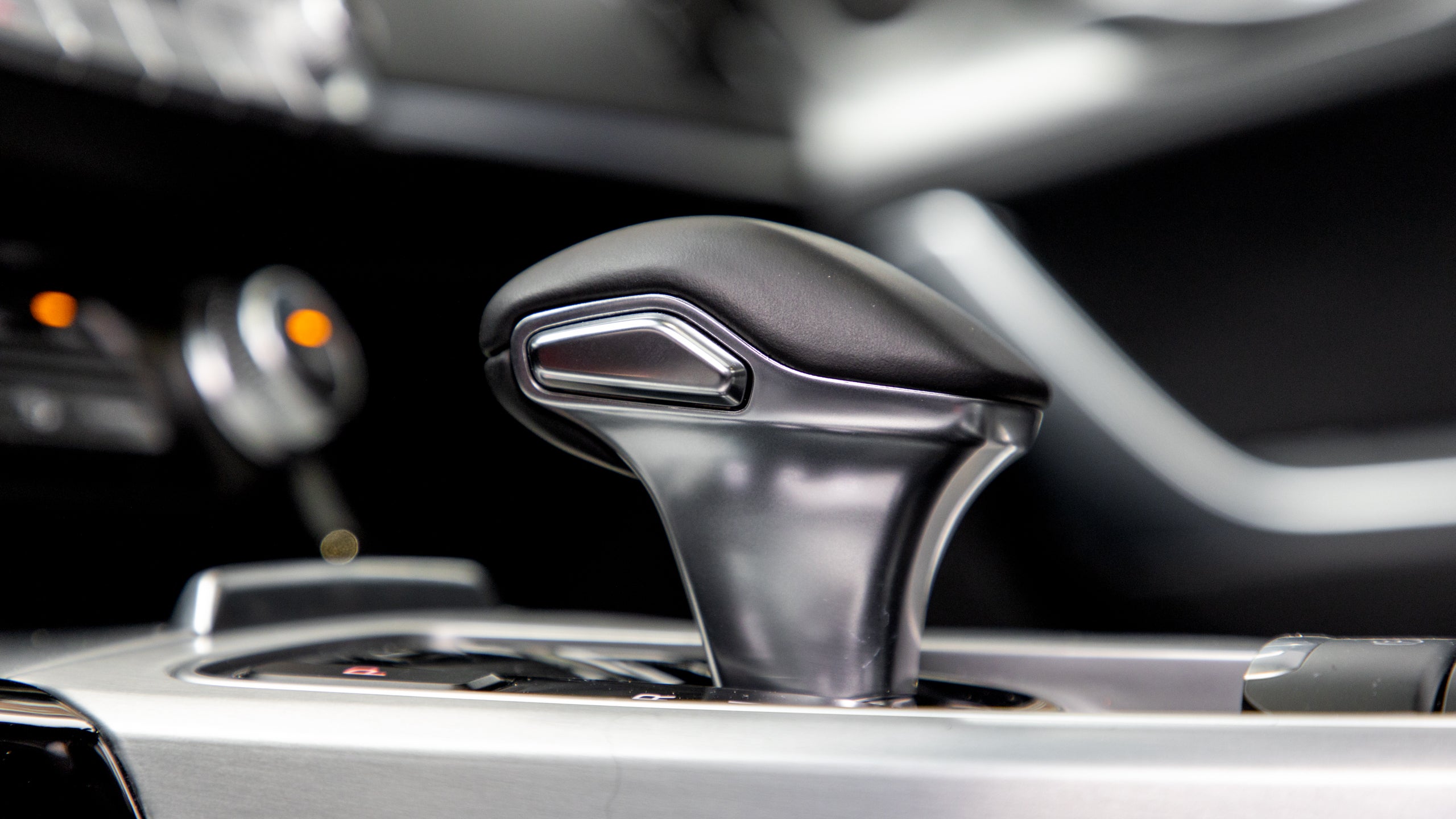 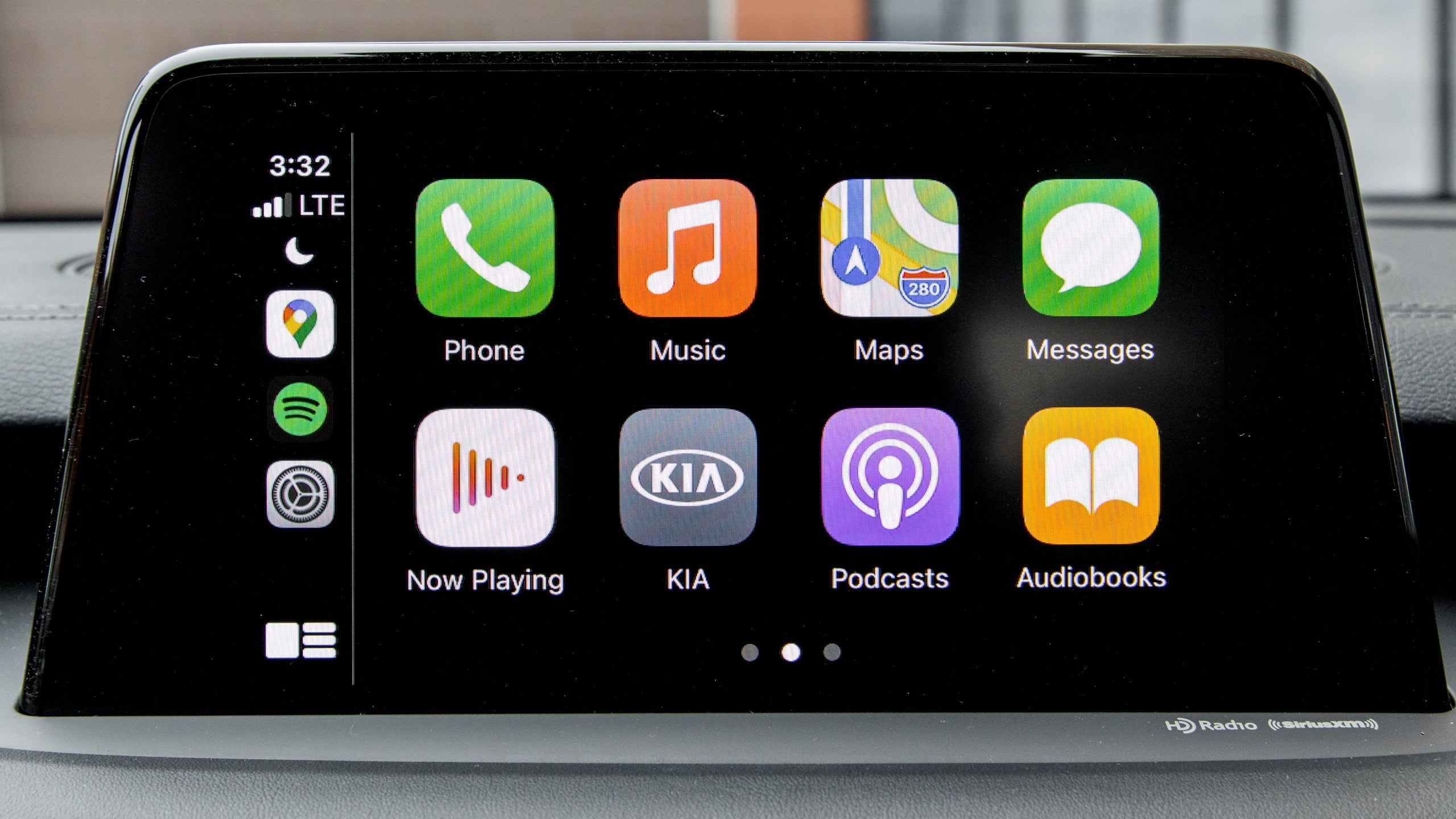 Those plastic silver buttons operate a high-mounted, eight-inch touchscreen that, despite this car only being around for a couple of years, feels thoroughly dated both in its display quality and software. Wired Apple CarPlay and Android Auto are onboard but the already-upgraded 15-speaker Harman Kardon sound system frankly doesn't sound very good and, a little hilariously, switching between drive modes can cause whatever song I was listening to at the time to skip like an old CD player would going over a pothole. Thankfully, Kia also recognizes the subpar infotainment because next year's model will receive a properly wide 10.25-inch head unit presumably running much more up-to-date software.

All that said, this car isn't really about surrounding yourself in exotic materials or cutting-edge tech. It's about driving. And when it comes to controlling the Stinger as it goes down a road, things feel very right. The seats are comfortable, feature perfectly-shaped headrests, and keep the rest of you in place with bolsters that squeeze inward in Sport mode. The flat-bottom, perforated, thin-rimmed steering wheel makes you feel like you're participating in motorsport.

Power comes from a 3.3-liter, twin-turbo V6 producing 365 hp and 376 pound-feet of torque. On the street, this is more than enough and delivered in a way that's well-judged for most normal driving. Find yourself an empty backroad, dig deep into the throttle and acceleration is strong enough to gently but firmly press you into those expertly-sculpted leather seats. The transmission—the same eight-speed automatic found in the seamlessly-shifting Genesis GV80 albeit with different ratios—does its thing with little fuss when left to its own devices but snaps off manually-directed gear changes with little hesitation if you choose to pull one of the metallic steering wheel paddles. 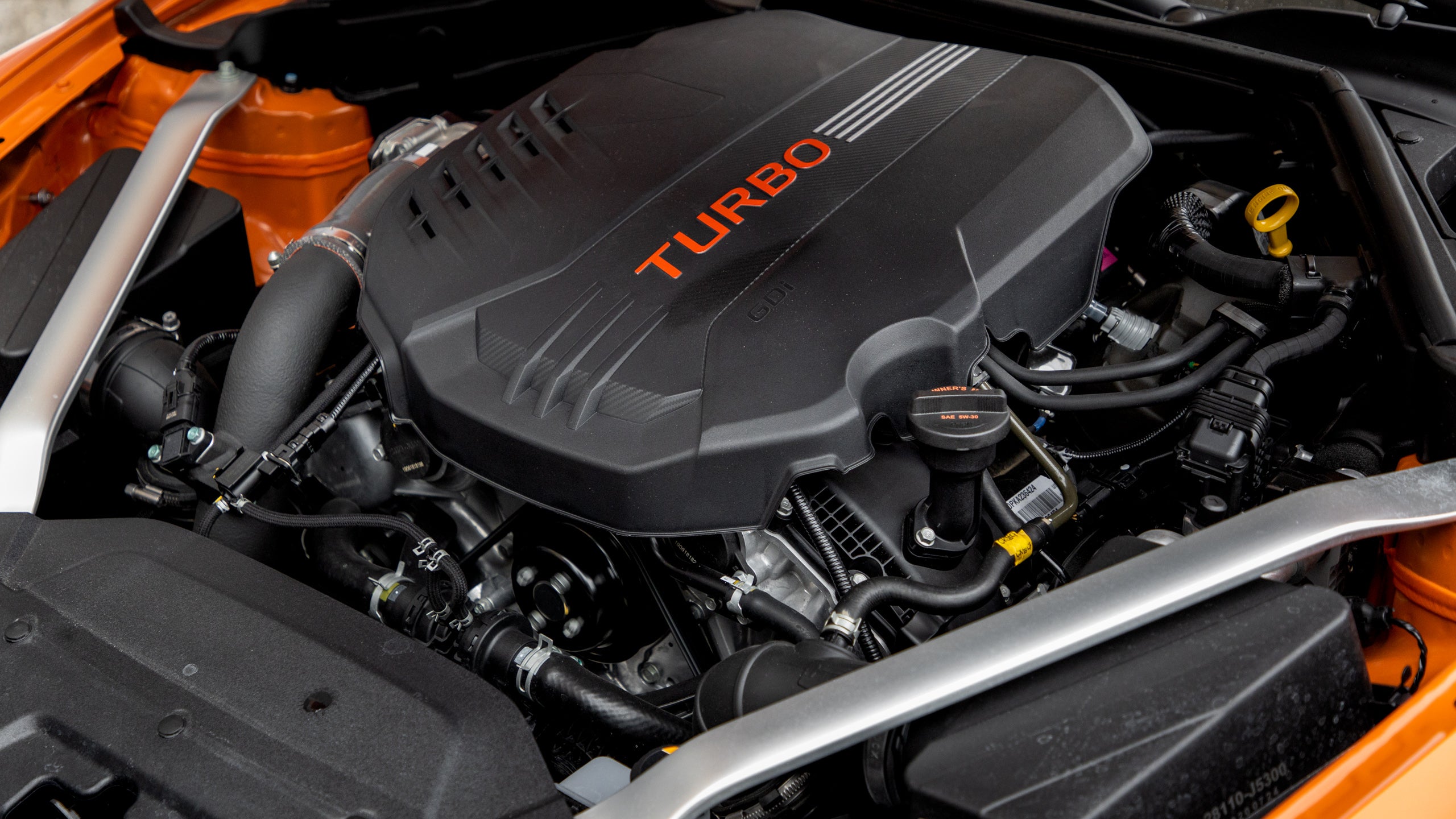 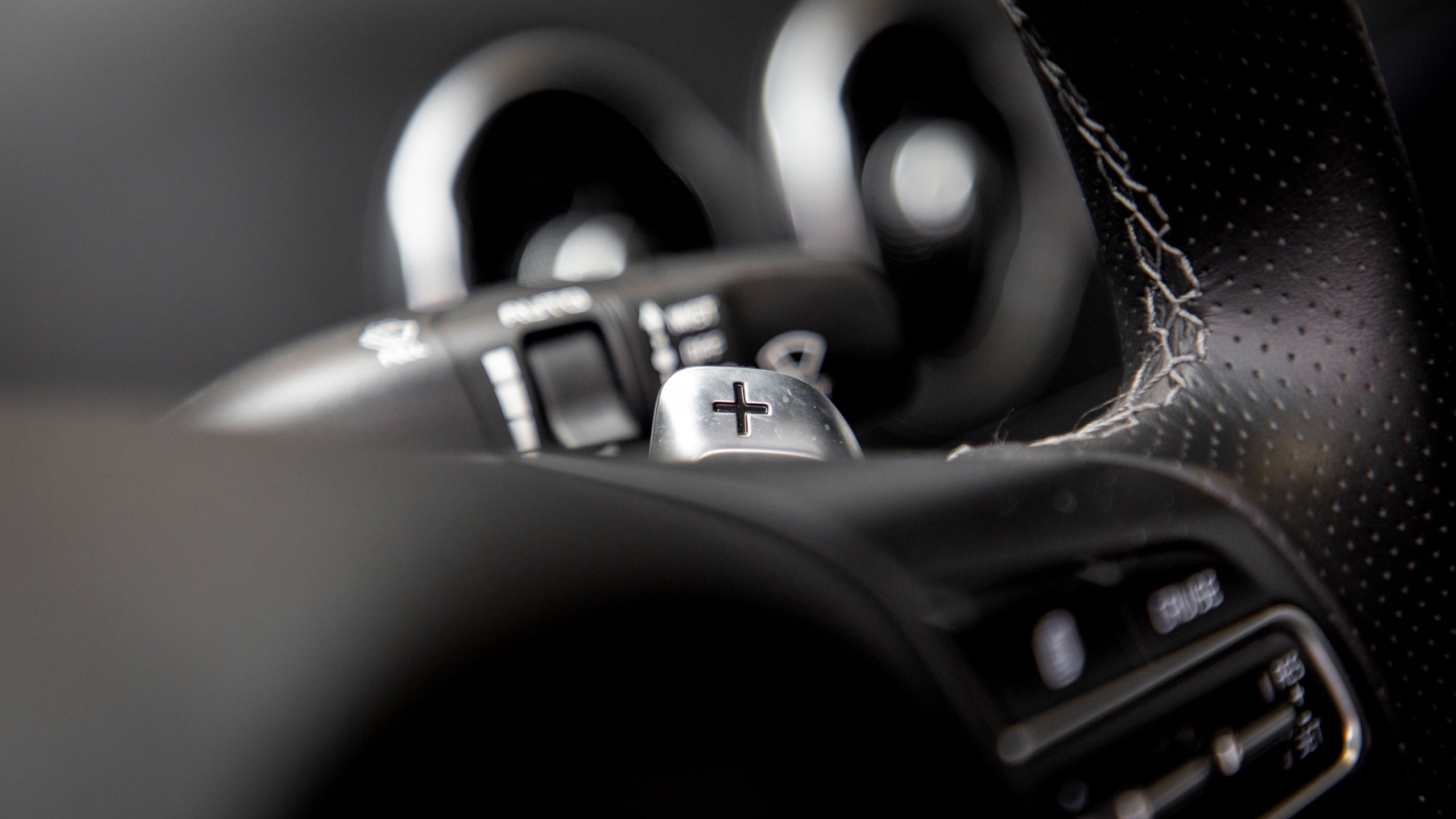 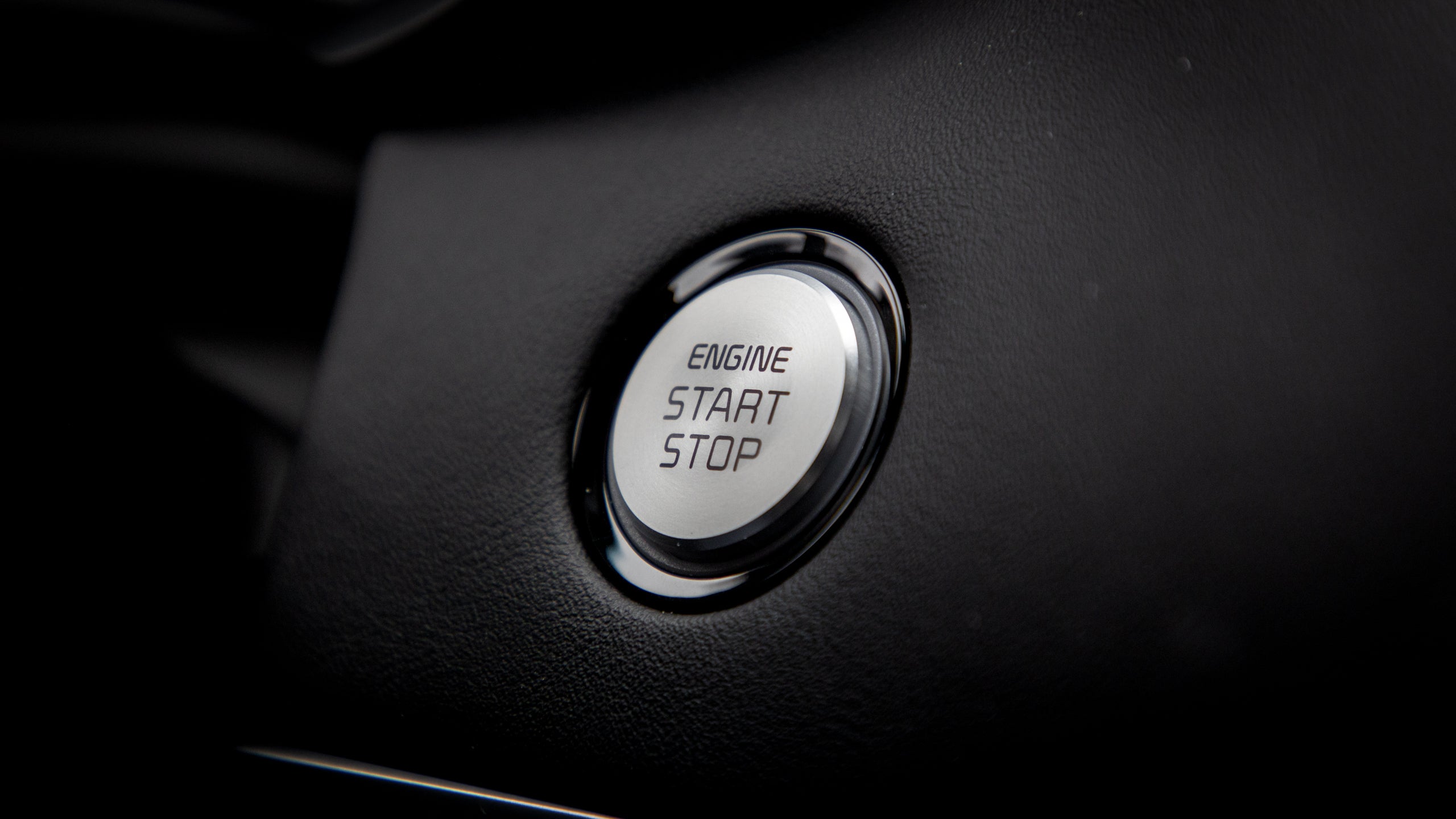 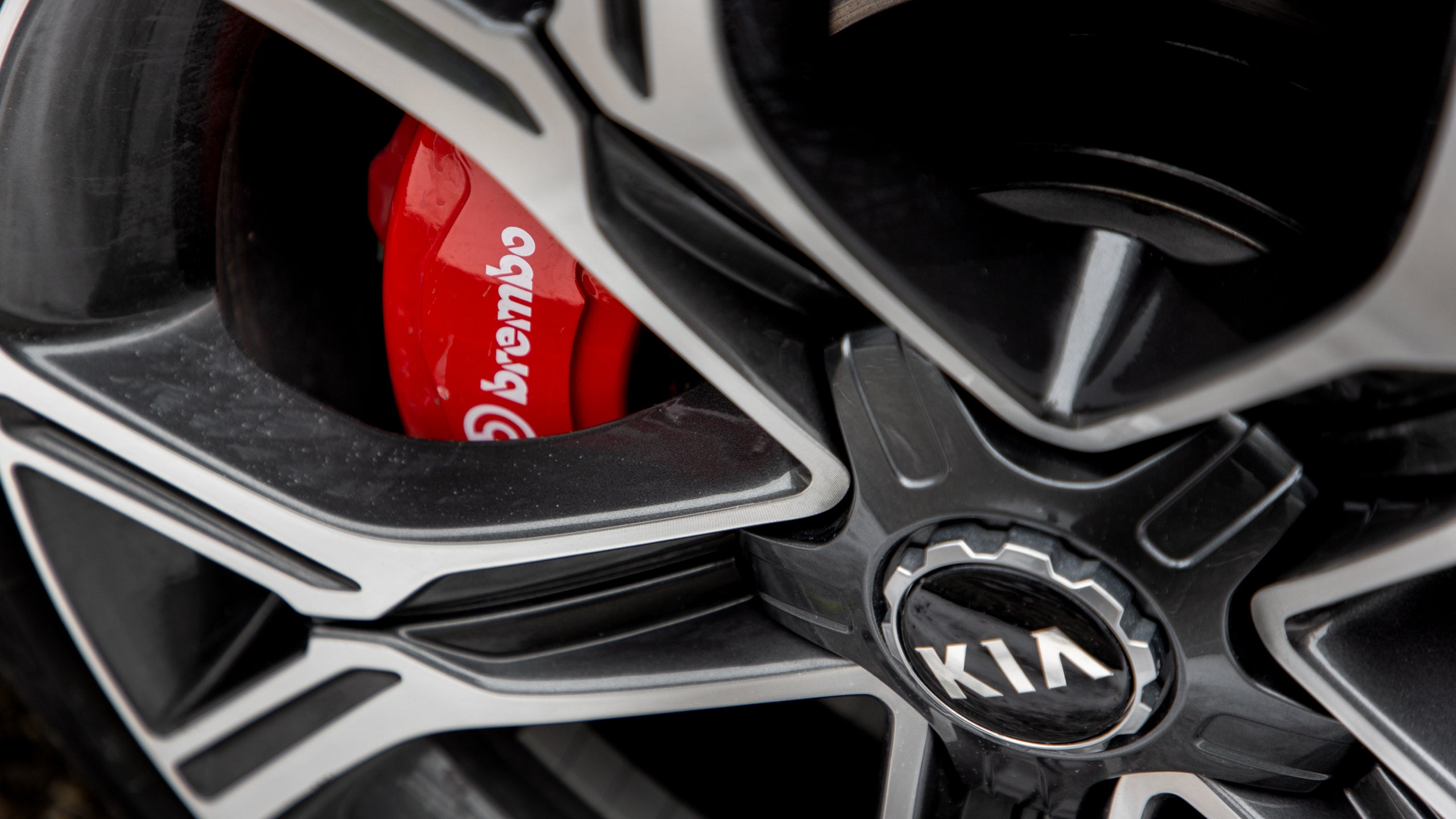 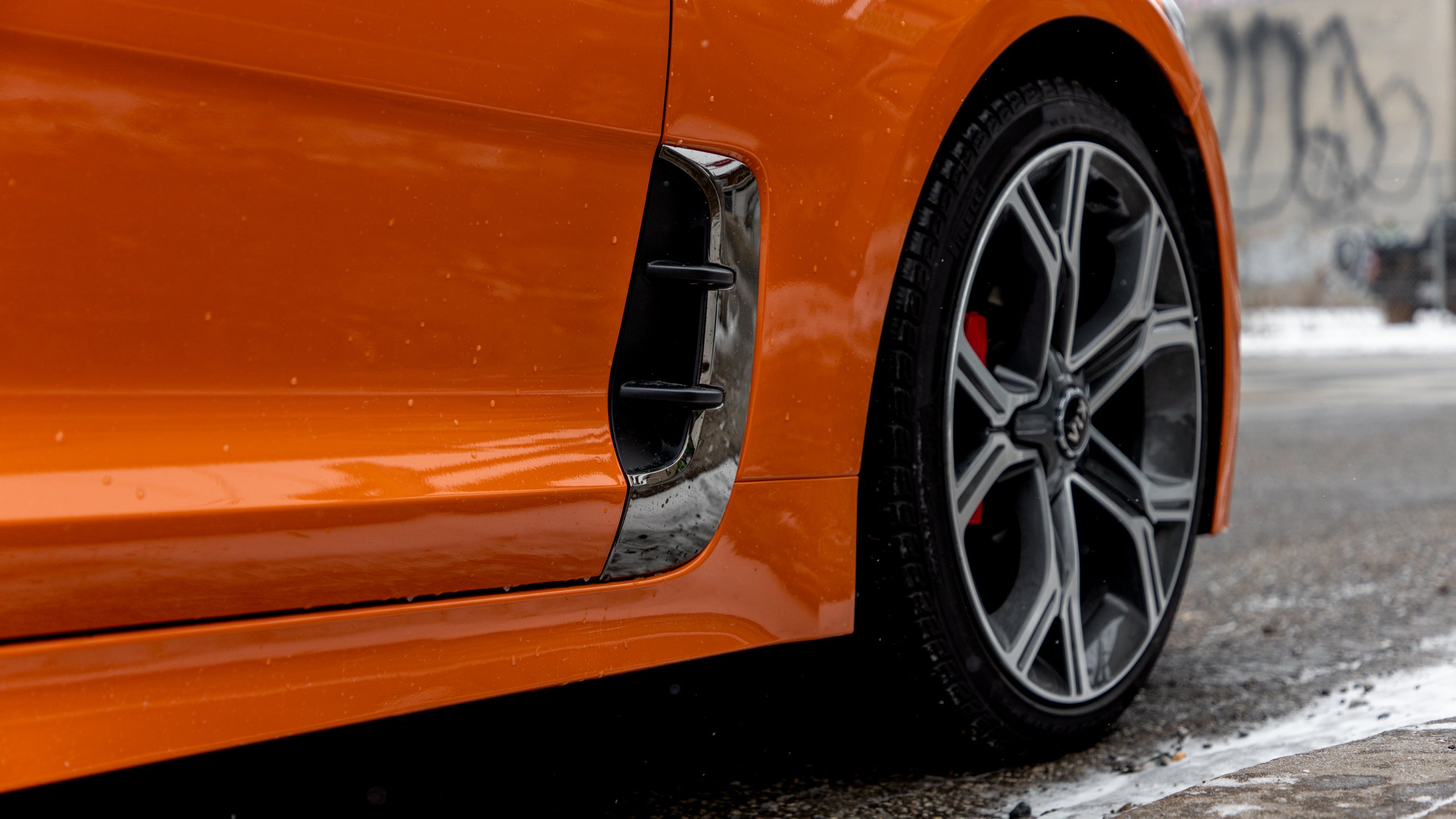 Avid readers of The Drive already know how I feel about this car's piped-in engine audio (I love it) but for those who hear things differently, it can be turned off.

Steering is really nicely weighted and feels pure. On the highway, the whole thing feels luxury-car smooth and stable. Its chassis is very solid which allows for suspension that's never crashy or overly stiff. The brakes—Brembos measuring 13.8 inches up front and 13.4 inches in the rear—are strong, easy-to-modulate, and well-tuned. All of the Stinger's major mechanical ingredients feel similarly well-baked and well-produced and all of its inputs are cohesively satisfying; purposeful and athletic but never uncomfortably so.

As good as this car is though, it isn't completely unflappable. Going over bumps briskly mid-corner causes the car to disconcertingly hop and move laterally, so there's definitely room for improvement in the suspension department there. Oh, and rearward visibility is laughably bad for a four-door car.

On the whole, though, Kia's four-door GT car operates at an admirably high level when it comes to handling, able to carve up a fast, curvy road with great confidence and ease. It feels authentic and is a proper sports sedan, through-and-through. Cover up the badges, displays, and switchgear with masking tape and plop someone into the driver's seat with a blindfold before driving off and you'd forgive them for thinking they were piloting a BMW M340i.

In fact, the week before I was tasked with driving and living with the Kia Stinger, I happened to have the privilege of testing a BMW 330e. And with the exceptions of a much more advanced infotainment system and better fuel economy (inevitable, given that car's plug-in hybrid setup), I cannot think of a single thing the BMW did better than the Stinger, despite costing thousands more. In hindsight, I probably shouldn't have been surprised considering the even cheaper, front-wheel-drive Kia K5 GT already shows the Bimmer up in the driving department. With the Stinger though, Kia runs the score up even more.

Yes, the Stinger's infotainment, sound system, and dash buttons are quite budget but every time the stereo skips on a drive mode change, you don’t really find yourself laughing at the Stinger. You laugh with it. Look at how little they gave a damn about everything outside of driving dynamics! The low-tech infotainment and low-rent buttons would be janky and unacceptable in a car with a more pretentious badge but in The Enthusiast Kia, I kind of would not have it any other way. Plus, those who really must have a decent head unit with their Stinger can just wait for the 2022 model. Hell, find the right dealer and you may not actually have to wait at all.

A Badge Is Just a Badge

Based completely on merit, the Stinger deserves all the praise it gets and every sale it can muster. I use the word muster because, as it turns out, Stinger sales aren't doing too hot, to the point where its future has reportedly been in doubt. We can choose to blame crossovers for this one too but we also cannot ignore the reality that—just like how almost an entire city of Torontonians will support the Leafs no matter who's actually on the team or how badly they do—most people, when given $50,000 to spend on a luxury-ish sports sedan, will choose something with a fancy German badge over a Kia.

This is weird, because looking back on and comparing my experiences with the Kia Stinger and BMW's plug-in 3 Series back-to-back, the whole badge thing was not a detriment to the Stinger at all. I liked being seen in the Stinger. It's a cool car. It's rare. It felt special. BMWs are common. A bright orange, twin-turbo fucking Kia is not.

Y'know what driving an orange, fully-loaded Kia Stinger says about you? It tells the world that you're reasonably well off but absolutely do not care about status. It says you could've had an entry-level Audi, entry-level Mercedes, or even the Genesis G70 that this car in actuality shares a whole lot with but you didn't. You knew better. You went with the non-posh badge because you liked the Stinger and didn't care about what people would think. And what's cooler than not caring?