Nissan’s former “four-door sports car” is really more of a family sedan trying to be a GT. Luckily, it’s pretty good at that mission.

The 2019 Nissan Maxima Platinum, By the Numbers

Back when it first appeared on the scene as a full-sized sedan in 1988, Nissan made a stink about calling the Maxima a "Four Door Sports Car"—even going so far as to slap stickers reading "4DSC" on the windows. Admittedly, even by the post-Malaise Era standards of the late Eighties, that was more marketing hype than factual statement. Front-wheel-drive has never been part of the sports car recipe, after all, and the Maxima has been routing power to the front axle for all but the first four years of its life—an era that started in Jimmy Carter's presidency, and concluded before Ronald Reagan's re-election.

Still, while it may not be the four-door Z Nissan wishes you thought it was, the Maxima's blend of size and sportiness has always helped it stand apart from the family car crowd. The Altima was the sedan for boring family folks; the Maxima was the fun one, with a bit more oomph under the hood and more joy in the suspension. It was the car you bought when your soul said M5, but your budget said Buick. (It was also the beneficiary of what your humble author still insists was the most rockin’ ad campaign of all time in fifth-gen form.)

But in 2007, the front-drive handicap was joined by a second anchor weighing the car down: the dreaded continuously variable transmission, which replaced both the torque-converter slushbox and the stick shift that had been available on the car. Combine that with blobby, mid-Aughts styling, and the Maxima's appeal seemed to ebb by the day.

The 2016 model year, however, brought with it an all-new Maxima that seemed unashamed to embrace the more outgoing design cues in Nissan's DNA. The grille looked barely a generation removed from the GT-R's maw; the headlights and tail lamps wouldn't have looked out of place on a future Z; and the interior, in higher trims, looked every bit as put-together as the fashion plate Murano. Still, with full-size sedans at near-luxury price points no longer setting the world on fire, the Maxima has spent the last few years in relative exile in the corner of the Nissan dealership, waiting for those rare souls willing to drop roughly $40,000 on a car without a fancy badge, towering ride height, or all-wheel-drive. And when those folks wander by, will they wonder: Is there even a hint of sports car soul left in this big, cog-free car?

For the 2019 model year, the Maxima scored a mid-life facelift. Trouble is, you'd be hard-pressed to notice; the changes are basically impossible to spot, except perhaps to Maxima connoisseurs. (and do any of those exist anymore, now that the stick shift is gone?) It's a busy look, admittedly, but the general effect is pleasing to the eye. It's certainly aggressive, with an angry beak and a narrow gaze; think of a cartoon parrot saying, “Shit just got real,” and you’re there. It’s distinctive from the rest of the Nissan lineup while still being clearly part of the family—a trait more carmakers should shoot to master.

It's not without its issues, mind you. The awkward blacked-out trim on the C pillar— is harder to notice on a black car like my tester, though the thin strip of trim running along the bottoms of the doors still has an awkward kink downwards. Regardless, however, the flowing lines and angular details do a good job of cloaking the car's size. While it's even longer than a Honda Accord, the wide hips and big, eye-grabbing face make it seem more tightly wired and well-proportioned. You might even say it makes it look a little like a four-door sports car.

Step inside, and the Maxima reveals a cabin that's a bit dated, but still plenty functional. Between the the control surfaces and the way the panels all seem to curl around the left-front seat, the driver's area does a good job establishing that “cockpit-esque” feeling many automakers aim for without feeling claustrophobic. The driver-canted dashboard and center console place everything within easy view and reach—except for the control knob for the infotainment system, which seems to have been designed for a species that has an extra hand where humans have elbows. (Luckily, the infotainment screen is both touch-sensitive and located at the ideal distance for tapping, making the knob redundant.) Special mention should be reserved for the steering wheel that sits front and center in the driver's world: It's a delight to hold, with perfect nests for your thumbs at 9 and 3 and a satisfying thickness to the rim. (Paddle shifters would have been nice, giving the car's sporting affectation, but they're reserved for the SR trim.)

The black-and-tan interior trim, which Nissan formally calls "Rakuda Tan Semi-Aniline Leather with Leather Inserts" but Mike Spinelli described appreciatively as “peanut butter and chocolate guts,” look really good, especially with Platinum’s quilted leather on the seats. Those seats are part of what Nissan describes as its "Zero Gravity" line of thrones, and they live up to the NASA-inspired hype; between the soft leather and the supportive padding, they feel comfortable enough to make your bladder, not your butt, the deciding factor on when to stop on a long road trip.

Look a little harder, and some of the interior choices start to reveal weaknesses—mostly related to cost. Much of the "metal" trim is plastic, as is the shiny "piano black" surround framing the infotainment area and center console. The buttons scattered off out of sight to the left of the steering wheel by the driver's knee are cheap to the touch, not that you'll be touching them very much, considering the only way to reliably hit them is by either groping blindly or trying to bend your head awkwardly around the wheel. (Which wouldn't be much of an issue if they controlled features most people rarely use, but instead, they're in charge of frequently-accessed functions like the heated steering wheel and trunk opener.)

It's reasonably roomy inside, as well. The back seat might not be Rolls-Royce roomy, but there was enough room behind my long legs to fit an average-sized adult. And should you slide four people into the cabin simultaneously, 14.3 cubic feet of cargo space in the aft compartment works out to a 100-liter duffel bag for each occupant in the trunk with a little room to spare.

In spite of what would seem to be the myriad compromises baked into its construction—not just the aforementioned drivetrain issues, but also the fact that it's based on a Renault-Nissan architecture dating back more than a decade and shared with the likes of the Pathfinder and Infiniti QX60—the Maxima comports itself well in enthusiast hands on public roads. The gearbox transmission proves itself surprisingly responsive; it never feels laggy, and rarely suffers from the elastic throttle response common to many cars stuck with the belt-driven interface between engine and wheels. That's not to say a well-calibrated six- or eight-speed automatic wouldn't be superior, but this Nissan's driveline is certainly one of the least-objectionable CVT setups out there.

The transmission's reasonable nature is, no doubt, in part a result of the engine it's connected to: the venerable Nissan VQ35DE, a naturally-aspirated V6 that's been kicking around in various states of tune for years. The power delivery is nowhere near brutal or surprising, the way downsized forced induction motors often are; instead, it doles out the power in a steady climb, every few hundred rpm adding a bit more urgency to the acceleration. Not only do the 300 ponies only arrive at 6,400 rpm—just a couple hundred shy of the fuel cutoff—but the 261 pound-feet don't all show up until 4,400 rpm. It may not make for afterburner-like acceleration, but it certainly makes it easier for the driver to dial in just as much go-fast as he or she wants, even in spite of the variable transmission.

While the front-wheel-drive layout means it probably wouldn't be the sort of car you'd have much fun pushing to 10/10ths on a track, it works just fine elsewhere. At the sorts of speeds and levels of engagement you're apt to encounter in the real world—even on the highways of the Tri-State Area late at night, when the broken heroes on their last-chance power drives often drive close to double the speed limit—it’s pleasant to drive; it's nimble and fast enough to get out of other cars’ way with ease, whether it's the one doing the passing or diving out the way of faster traffic.

If nothing else, Nissan deserves credit for keeping the Maxima around in the face of declining sedan sales and internal competition, both from crossovers and other sedans. (Not only does the new 2019 Altima offer its own luxurious Platinum trim at a lower price point, but it actually has more passenger volume, more cargo capacity, and its turbocharged inline-four delivers more torque.) As such, sales have slipped; last year's tally of 42,337 units moved in America was down 37 percent over 2017, coming in at roughly 50 percent the sales of the slightly more expensive Murano that occupies a similar style-over-substance role on the SUV side of the carmaker's lineup.

Yet it endures—not as a sport sedan, but as a surprisingly engaging road tripper for drivers who want a little more character than average from their ride. Those 4DSC decals are long gone, but should Nissan ever feel compelled to slap an abbreviation on the Maxima's windows again, 4DGT ones wouldn't be a bad replacement. 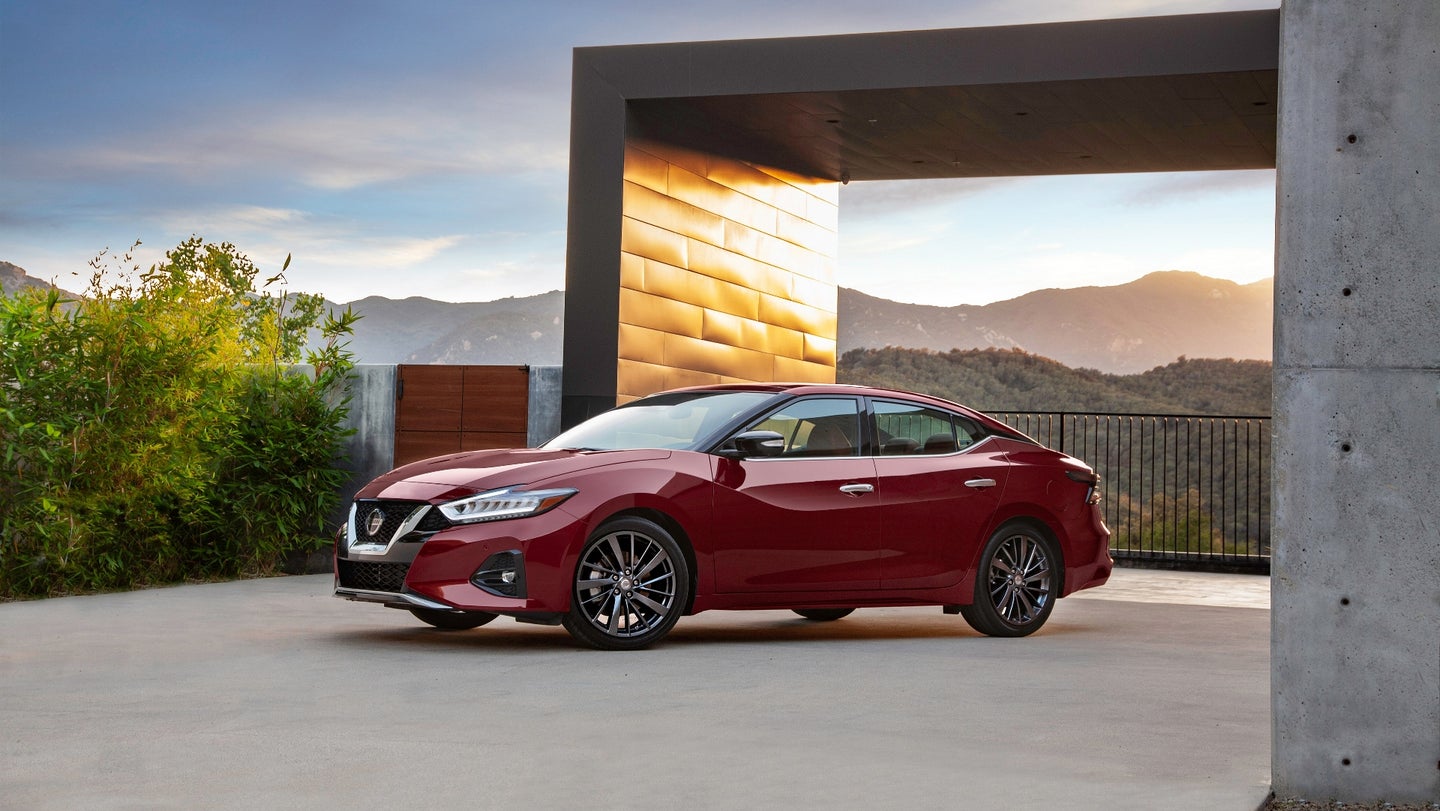 2019 Nissan Maxima: One of the Final Surviving Sedans Gets Updated

The Maxima may be part of a dying breed, but this big four-door just got a tasteful makeover. 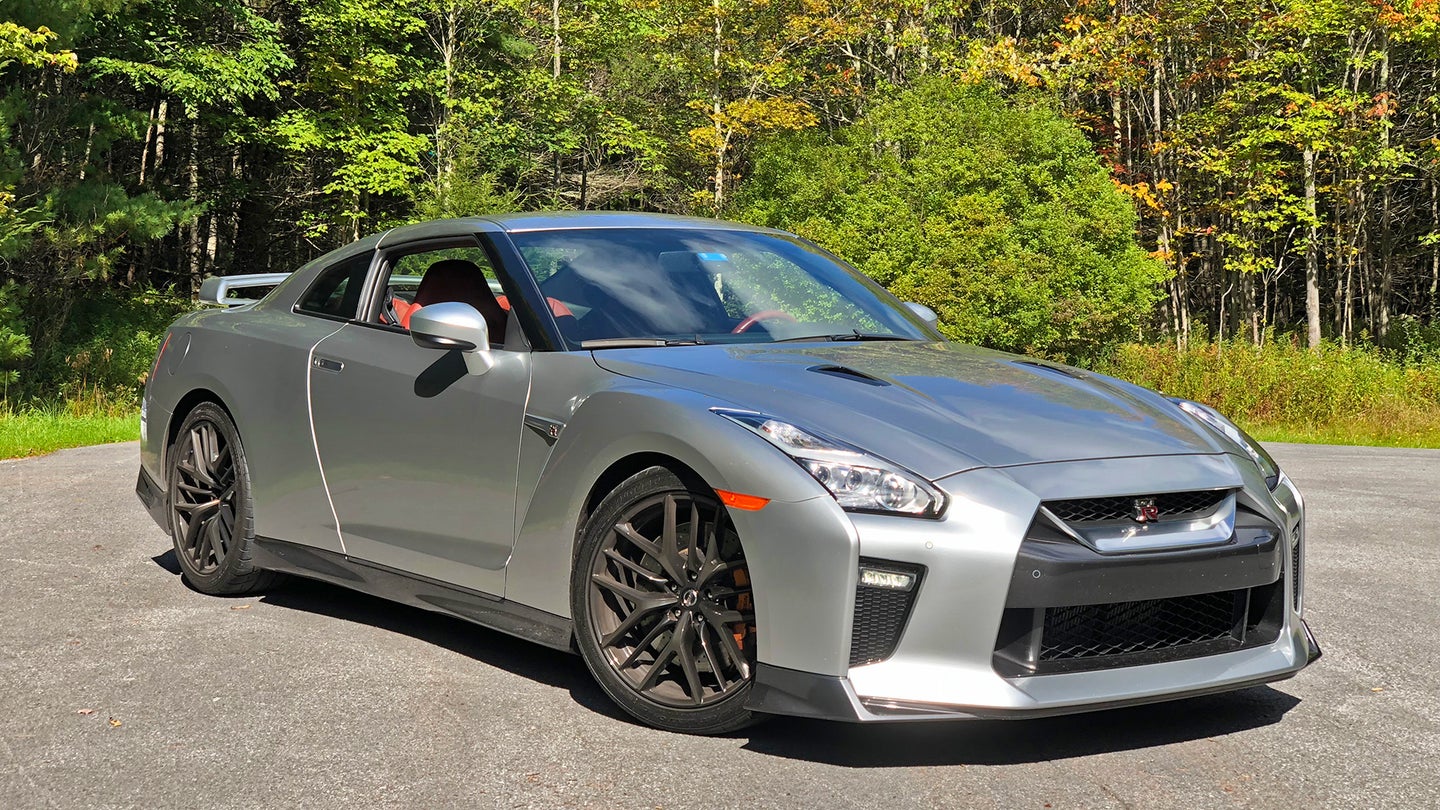 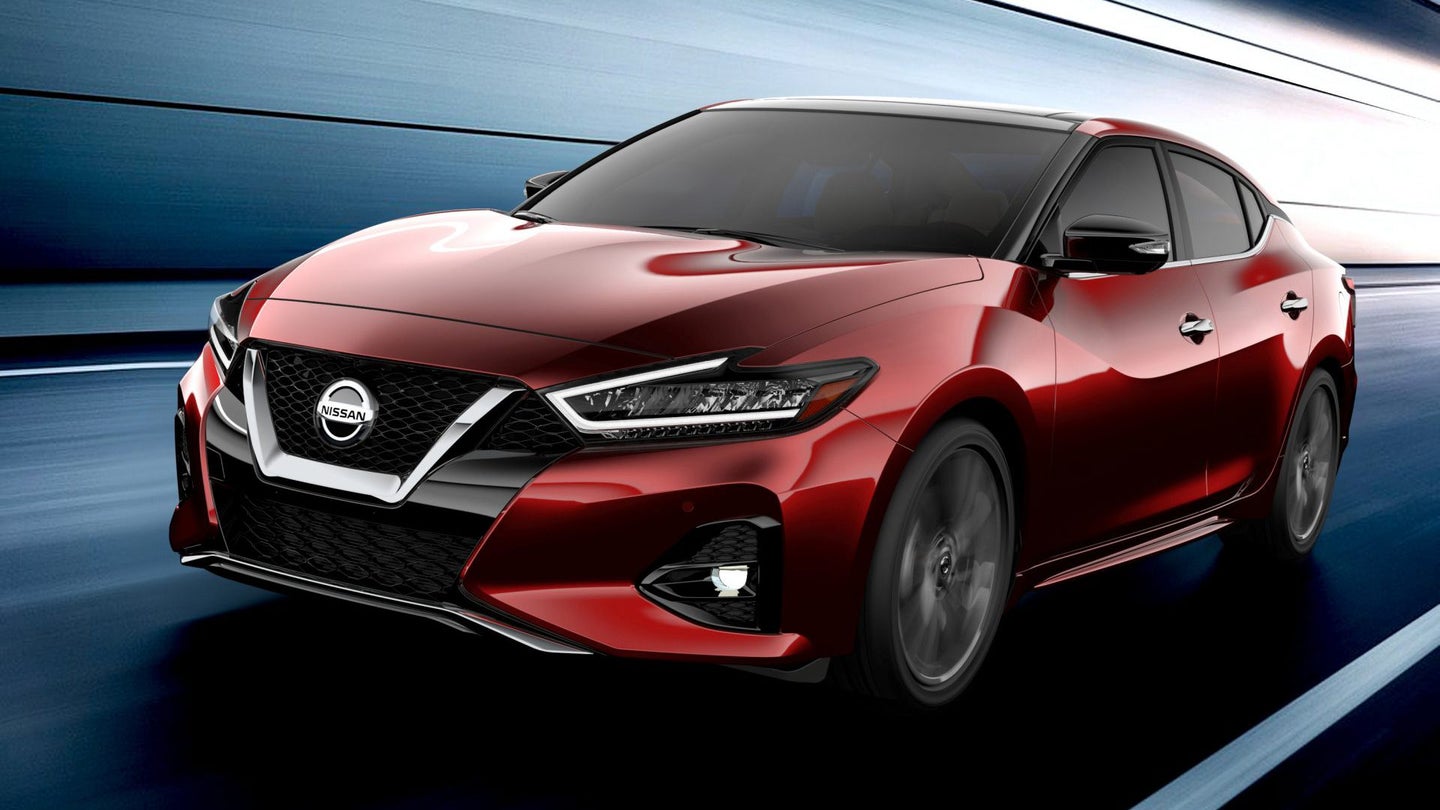 Here’s Your First Look at the Facelifted 2019 Nissan Maxima

Nissan says the revised Maxima will get six new active safety features along with other bits of trick tech. 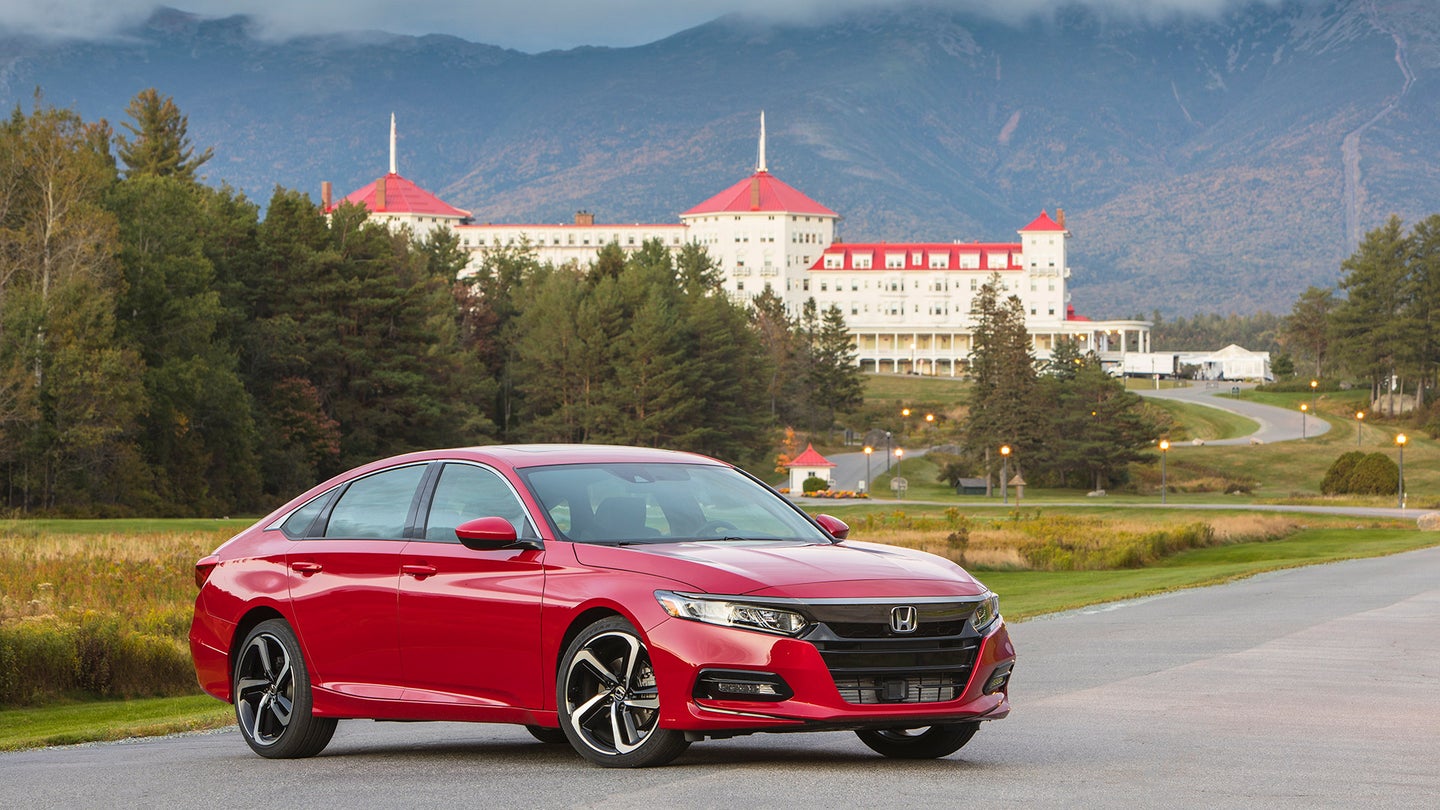 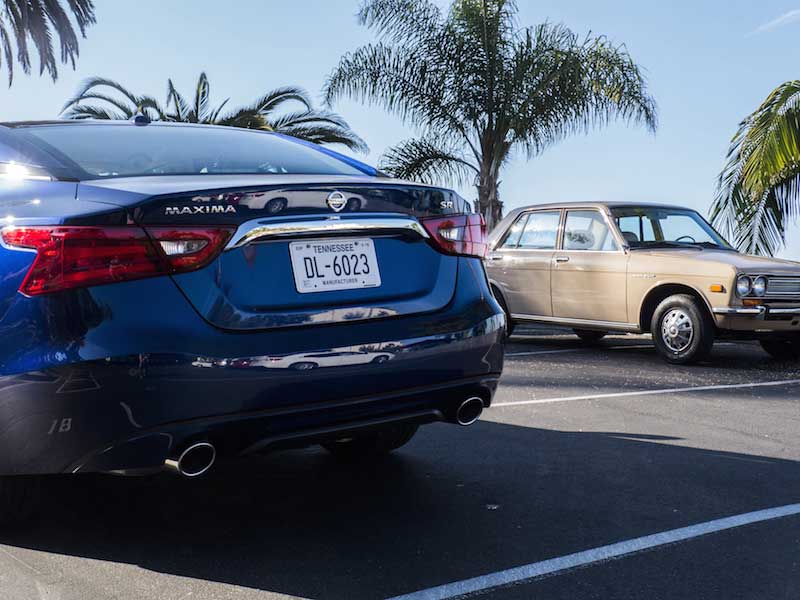