Hands off the wheel, HAL, we've got this. 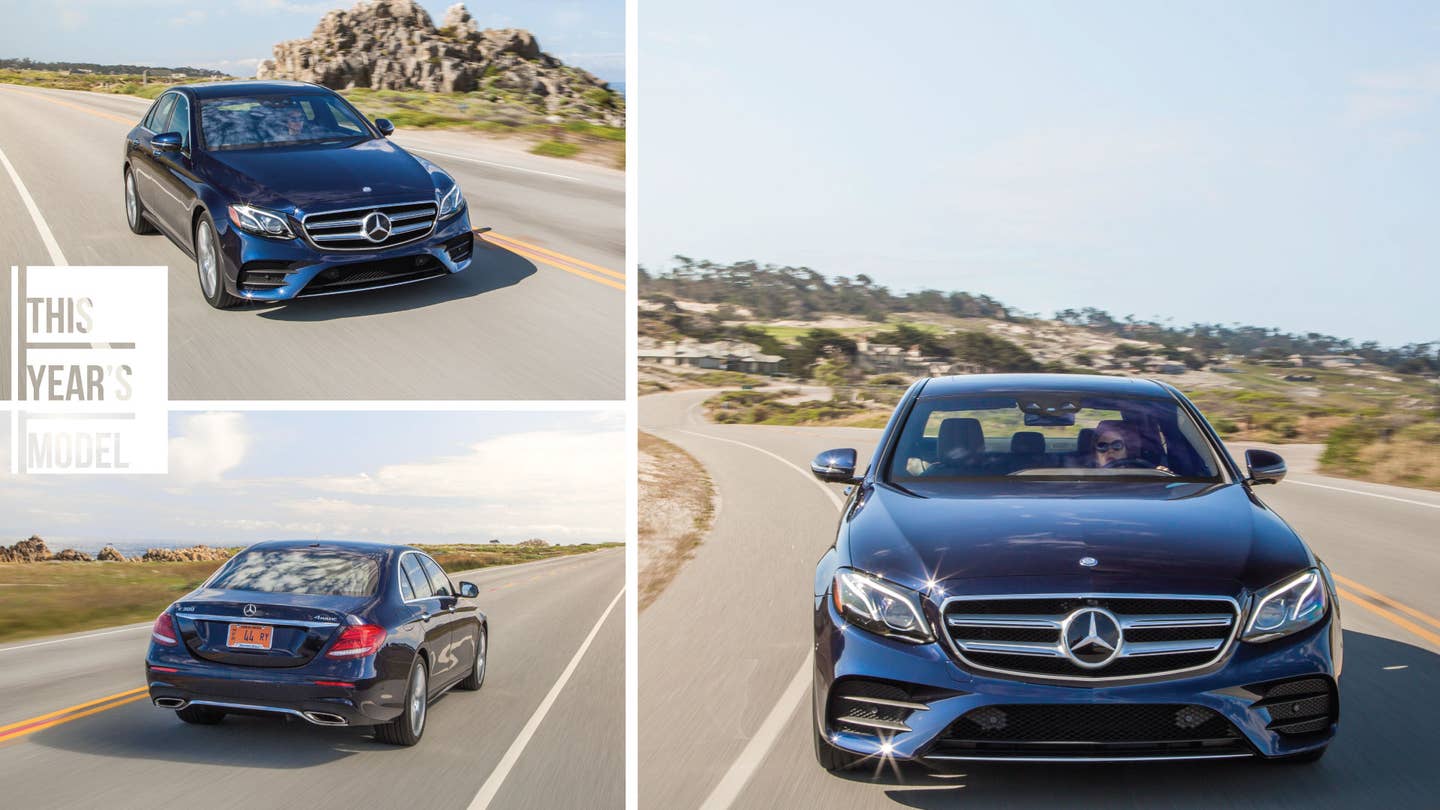 Like a parent with an MIT-bound student, Benz can’t stop yapping about how intelligent the E-Class sedan is. By “intelligence,” Mercedes means gadgets, with the E-Class now part of the accelerating arms race in semi-autonomous driving.

So, like a bored neighbor tired of hearing about Johnny’s straight-A exploits, I tried my best to ignore the Mercedes’ overstuffed suite of electronic helpers, and just enjoy the car. And enjoy it I did, once I figured out how to shut off an automated speed limit warning that kept nagging me from the driver’s display. I guess it’s cool that the Mercedes can (sort of) change lanes by itself; or transmit a pink-noise audio frequency in the split second before a collision, triggering a muscle in occupants’ inner ears that guards against damage from decibels. But my ears were much more attuned to the E300’s newly adopted, 241-horsepower four-cylinder engine, with 61 fewer horses than the six-cylinder smoothie it replaces. We're talking a four-cylinder AWD sedan that tallied $71,455 with options, and starts from $53,075 in rear-drive trim. I’d love to be the fly on the wall at Mercedes while those profits are tallied.

In Benz’ defense, that base price is about $1,000 less than the departing model. Despite an on-paper 273 pound-feet of torque, the four-cylinder doesn’t feel as muscular as BMW and Audi’s 2.0-liter overachievers, and its exhaust note is whispery, four-cylinder Muzak. Like the larger Cadillac CT6, Mercedes has muffled the four-banger’s more-raucous tendencies, while a new 9-speed, paddle-shifted automatic transmission helps keep the engine in its sweet spot for power, noise and improved fuel economy, at 22/29 mpg in city and highway. The E-class makes for a beautiful cruiser, but if you spend any time playing autobahn racer, it feels like it’s working hard to keep the fast-lane pace. The engine can still redeem itself with a 6.3-second dash to 60 mph, just a tick or two behind a BMW 528xi or Audi A6 2.0T Quattro.

If you don’t consider the new powertrain a wash, patience will be rewarded early next year with the Mercedes-AMG E43. That badass E-Class will crank its bi-turbo V6 (also found in the C43 AMG coupe) to a new company high of 396 horsepower and 384-pound feet, while dropping the 0-60 time to a sizzling 4.5 seconds or so. The sumptuous E400 wagon will arrive around the same time, with a rear-facing third row and 329 horsepower from its own bi-turbo six. We can’t wait to drive that alternative to the Volvo V90 and the wholly unexpected Porsche Panamera Shooting Brake.

For people who are cool with four discreet cylinders in a nearly 4,000-pound sedan, the E300 still makes a persuasive case, piling on the luxury and haute design until it come out your crash-protected ears. Following the flagship S-Class and compact C-Class, the Mercedes now raises the standard for midsize sedan interiors to a level that even Audi can’t match.

To wit: We at The Drive are mostly allergic to piano black trim, which tends to look like toy plastic even when it’s real wood. But the Benz’ gorgeous, optional lacquer-black recalled a $4,000 Tom Ford couture suit, its flowing pinstripes of metal embedded in artful timber strips along the dash and doors. The optional, dual 12.3-inch displays seem to merge into one Tesla-baiting screen, set behind flat glass, one for the driver, one for the center console. The highly reconfigurable screens are among the most attractive, richly informative displays I’ve seen in any automobile, including architectural map renderings of Manhattan skyscrapers and street, the jut of every obscure Brooklyn pier and the blue ocean beyond. Those eye-flattering graphics pair with enough ambient lighting for a romantic restaurant, with a choice of 64 colors.

In the past I've found Mercedes’ COMAND system strong on graphics but fussy and frustrating in operation, but this iteration is the best yet. There’s still a learning curve, but the new pair of touch sensitive steering wheel buttons – smartphone-style black lozenges which swipe vertically or horizontally – quickly become good co-managers for the instrument cluster or central display. You can always fall back on Mercedes’ familiar knurled-metal console controller, and its arched wrist-rest and touchpad with handwriting functions that basically no driver has used, ever.

Most of the show-off stuff requires spendy options, including my test car's Premium 3 package which bundles 29 features into $10,400 worth of sensory and technical splendor. A short list includes rapid-heating massaging front seats, a crystalline Burmester sound system, a self-parking system, wireless phone charging, a heads-up display, fragrance atomizer (for which Benz needs some higher-quality scents) and – by my count – a dozen electronic “Intelligent Drive” systems that act as dream wingman or nightmare nanny, depending on your level of self-reliance.

The coolest of these gizmos, unfortunately, are ones you can’t really test, including Evasive Steering that dials in more steering torque when it senses that you’re trying to avoid a collision. If you’re about be whacked from the side, Pre-Safe Impulse Side inflates seat bolsters to scooch the driver or passenger 2.75 inches closer to the vehicle’s center to mitigate injury.

Smashing this Mercedes would certainly be a shame, because the exterior is lovely as well, in a conservative manner that’s in keeping with E-Class ethos. If the interior is Tom Ford, the exterior is a perennial navy blazer (albeit Designo Cardinal Red in this case), whose expensive cut will draw admiration from more-discerning sorts. This is a real grown-up’s car, and it seems destined to age well – so long as the electronics don’t go on the fritz. On that score, firing up the Benz at night produced a light show, the headlamps swiveling to and fro across the street like a pair of prison searchlights before settling into straight-ahead position.

We've found the Mercedes is no Tesla when it comes to Autopilot action, especially concerning the Benz' soupy, intermittent and undependable automated steering inputs. But I’m convinced that a company the size of Mercedes – a global giant to Tesla’s gnat, with a century-long record of innovation and hundreds of engineers and scientists working the problem – can close the gap as quickly as it sets mind and money to it. If that doesn’t work, it can just buy up technology or companies it favors. The new Active Lane Change Assist worked reasonably well, automatically steering the Benz into a safely open lane after I hit the left turn signal, passing a dawdling car and then easing back into the right lane. And on Manhattan’s ever-frazzled FDR highway – a six-lane cage match filled with 175,000 combatants a day – the Benz’ radar-beaming Distance Pilot Distronic did a bang-up job of pacing traffic at speeds between 0 and 60 mph, never once demanding that I touch the gas or brake.

But on two occasions, the Mercedes applied its own brakes – make that “slammed on its brakes” – while I was reversing along curbsides in Brooklyn. Both were false alarms, seemingly from the rear cross-traffic system, triggered by passing cars that presented no threat. Both auto-braking events scared the bejesus out of me, making me think I had smacked a pretty press car into some unseen object before I realized it was unharmed. Let’s call it a work-in-progress.

Finally, no one should be surprised that the standard-issue E-Class is too graceful and tasteful to bother with youthful antics. If you’re looking for a sporting prescription, consult a specialist like the Jaguar XF or Cadillac CTS V-Sport. I angrily bossed the Mercedes into high-speed curves on New York’s Taconic Parkway, and learned that it prefers to be asked nicely. Toggling the E300 into Sport or Sport Plus made so little difference in performance, aside from more-eager gear selection, that I suspected the switch was purely for show.

The steering is leisurely, but weights up nicely in the manner of modern Benzes. The E-Class was shod with 18-inch Dunlop Sport Maxx tires, all-season rubber of the cushy variety, but the pairing still offered confident grip for any civilian mission. Still, driving the E-Class left me feeling warm, happy and sated, as though I’d just finished an expensive hotel brunch. Would I be happier if the Mercedes did all the spoon-feeding, performing every last driving function on its own? Check back with me in 20 years. But even in this kind of cocooning barcalounger of a luxury sedan, I’m determined to keep my brain engaged and hands on the wheel.