We went to Italy to whip the GLE's plucky little brother around the Alps. 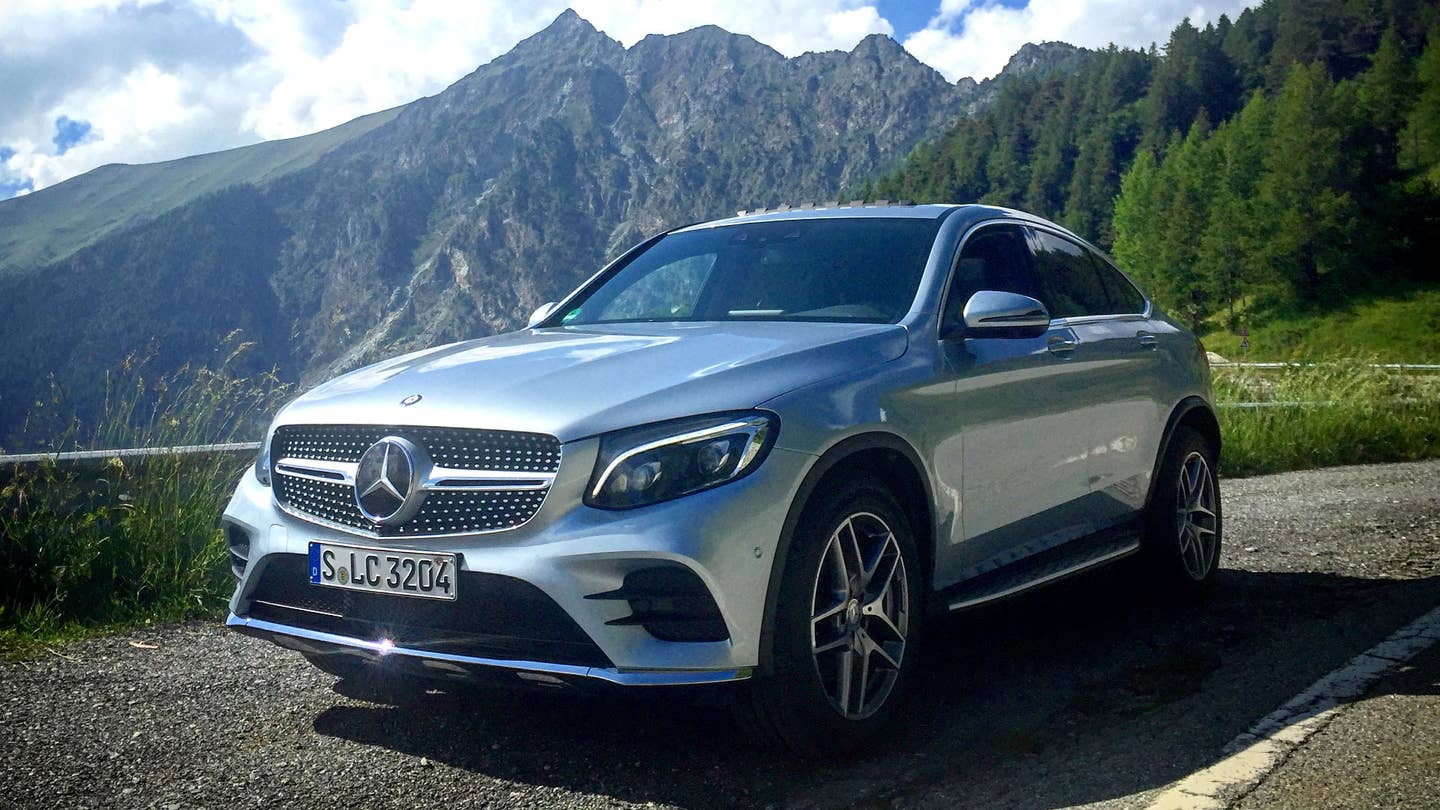 In April, the night before the New York Auto Show opened, a small herd of automotive journalists crowded around a silk sheet covering a comely lump somewhere in the Meatpacking District. After a few German engineers spoke about power, excitement and passion and a host of other adjectives, the sheet was whisked away to reveal the 2017 Mercedes-Benz GLC 300 4MATIC Coupé. “It looks just like the GLE,” I muttered to no one.

You’d be hard pressed to note any easily discernible aesthetic attributes that distinguish the GLC from the GLE. It’s smaller, but not appreciably so. It’s ten inches shorter and the roof is four inches lower. It’s 1,000 pounds lighter, but it should be on a diet if you’re going to use a inline 2.0-liter 4-cylinder instead of a 3.0-liter V6, as the GLE 400 features. I’d driven the GLE 450 AMG Coupé around Miami over the winter. That twin-turbo and its resulting 362 horsepower and 384 lb-ft of twist was fun. It snarled and burped on the shifts, and had a fair amount of zip and tang. It made me reconsider my utter dismissal of all crossovers as pointless machines. This GLC seemed like the same car, only much . . . less. I wasn’t enthused.

Then I landed in Turin, Italy for the press drive. Admittedly, it seems odd to test out the new American version of a German car in Italy, but the backdrop was obviously lovely, and the promising switchback mountain roads that sprang up on the GPS’s route from Turin to St. Vincent, a sleepy hamlet nestled at the foot of some mountains in the Aosta Valley, were intriguing. How would the GLC handle the undulating and challenging terrain? The answer surprised me.

The turbocharged 4-cyl is good for 241 ponies and 273 lb-ft of torque, which was more the ample on the straight highways connecting tiny Italian country villages. It cranked up to triple digits surprisingly quickly, without complaint. While I’m one who’s always looking for a total horrorshow coming out the exhaust, the quietness of the engine was jarring, but I realize I’m in the minority and most people who purchase this car aren’t looking for something that sounds like it can destroy a track. The cabin was exceptionally quiet, and there was plenty of time to collect your thoughts while the hills and flats of the countryside blurred past.

Then we got to the twisty bits of tarmac. The Coupé has five transmission, suspension and engine settings: Eco, Comfort, Sport, Sport+ and Individual. The latter allows you to mix and match engine, transmission and suspension settings as you wish. The Sport+ setting is designed to work with the Air Body Control suspension to stiffen up and make the riders feel like they’re sitting in a sports car with a high level of lateral dynamics, and the car drops 0.6 inches. You won’t feel the lowering, but it does noticeably stiffen up and hunker down a bit. The throttle gets more responsive, and it lengthens the gearing so you can stay in the power band longer.

Accordingly, it handled the hillclimbs with aplomb, never leaving me wanting for more power or more oomph. The steering, while loose-ish, was precise enough to get the nose edging in exactly where I wanted it. Italian mountain passes are narrow as hell and you don’t want to creep out of your lane. The GLC 300 Coupé stayed just where I put it, sans complaint, tire squeal or issue. The permanent all-wheel drive kept it grounded and grunting forward.

Working through the 9G-Tronic transmission in manual, it became glaringly clear the only need for gears seven through nine were for fuel economy, as there was zero yank when your foot sank. (Not that it was a particularly thirsty beast anyway. We averaged about 20 mpg.) Working the paddle shifters enabled a little fun here and there, and occasionally, you’d get a small belch on a downshift, just the tiniest familial resemblance to its older, brasher brother.

The ultimate takeaway is that the GLC 300 Coupé is far more fun than it looks. Merc thinks the chief competition for this ute is the BMW X4 xDrive 28i, and they may be right, but I think it’s ideal for someone who wants to eschew the norm of the family minivan or blasé crossover in favor of something more stylish, with a hint of sport, a smidgen of swagger and an eye on the wallet when it comes time to fill the gas tank. Something that can get the kids safely to school, but will help you crack a smile when running errands and romping on it a little. Is it a car for me? No. I prefer more noise and power. But there are plenty of people out there who will eat this up with a spoon.

Mid-drive, we stopped to grab a gelato from a quaint shop somewhere near Verrés. I speak no Italian and the grandmother behind the counter spoke little English. After plenty of pointing, I settled on a double scoop of the best Stracciatella I’ve ever eaten. As I paid, the woman stopped me and motioned to the GLC through the window. “Very . . . nice . . . car,” she said. Grazie.