2019 Mercedes-Benz C300 New Dad Review: What Good Is Prestige for Parents Without Space?

The compact Mercedes-Benz C-Class is fancy, but it’s just not roomy or utilitarian enough to justify its lofty price to hard-working moms and dads. 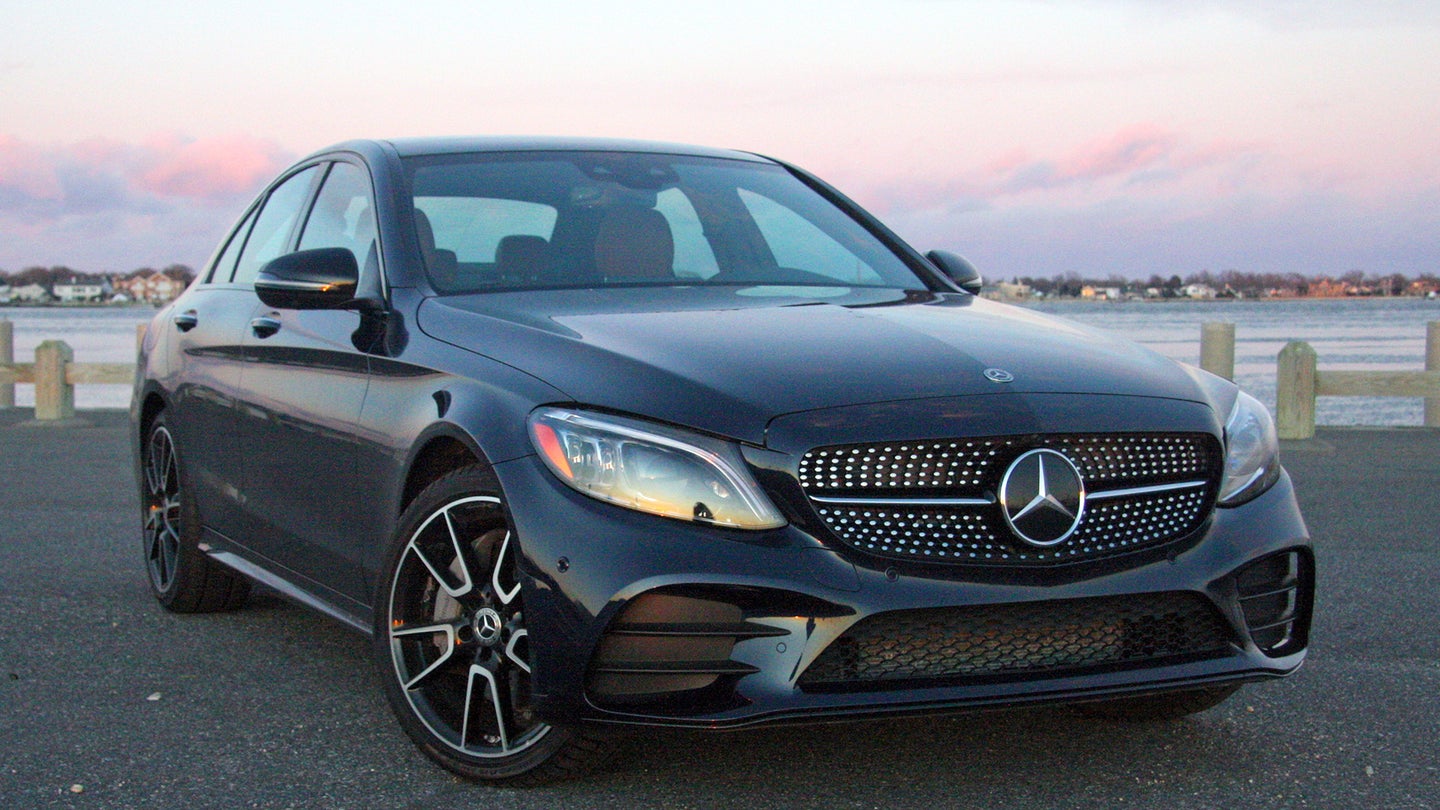 I finally did it: I'm a dad. The funny thing is, I've always owned dad cars, even before I needed to. Owning anything with less than four doors never made much sense, which is how I ended up with a stable of souped-up grandpa cars from the Sixties and Seventies. Now that I'm a father, the '74 Oldsmobile sedan I brought my wife and son home from the hospital in seems a bit dated. And that, my friends, is how I found myself on this quest to find the perfect new dad car. The latest contender: the 2019 Mercedes-Benz C300 sedan with 4Matic all-wheel-drive.

There's a car-related episode of the television show The Wonder Years in which the main character's dad needs to buy a new car. The show's tension revolves around his family's desire to buy a sexy new muscle car—possibly even a convertible. In the end, he buys a practical beige sedan. When I was growing up, that was how my parents operated, too. When I asked them why the neighbors had bigger, more expensive cars, they said, "Most of them can't actually afford it."

When I reviewed the new Mercedes-Benz A220, I found it to be a fine, if somewhat small, car. But I contended that someone who bought a compact luxury car either didn't have children or couldn't really afford to buy a luxury car. The same is true for the C-Class, in my eyes, only more so. Although it's larger and more powerful than the A-Class, the C-Class doesn't feel much bigger inside, or much faster on the road.

But the question that made you click on this review is, how does this fare as a car for parents? The simple answer: not great. The A-Class I tested—which was significantly less roomy than a $20,000 Honda Civic—cost around $48,000. One would assume that the C300 4Matic—which cost about $16,000 more than that A220—would include that much more value than its slightly smaller stable mate. But it doesn't. That fully-loaded $50,000 A-Class comes with all of the active safety features and technology in a $64,000 C-Class—and in some cases, options the C doesn't even offer.

But what about cargo space, so important to parents carting around all the requisite bulky kid junk? At a whopping 12.6 cubic feet, the C-Class has just over half a cubic foot more space in its trunk than the A-Class. That's not a lot of space, but you can fit a stroller and a few bags of groceries in there. Going on a weekend trip, though, could be more of a challenge—especially if you plan on dragging along a folding crib, a suitcase, diapers, and whatever random toys you grab on the way out the door in an effort to calm your upset child as you stuff him into his car seat.

If the C-Class is the image-conscious professional's personal ride while the rest of the family leans on something more family-friendly, it'll likely be left in the garage when group outings require vehicular travel. This certainly isn't a great option for a family road trip. The front seats are firm to the point of being hard; even with many layers of adjustability, I had a hard time getting comfortable. As with the A-Class, the back seat of the C-Class is tight, although the wood trim and interior materials are a bit nicer than the more plasticky, nightclub-themed A-Class interior. But as I've said in other reviews, parents can have nice things, but they should expect to find them broken or filthy before long. So the question becomes, who are you trying to impress? The child doesn't care about brushed aluminum and sumptuous leather; hell, he or she probably wants you to buy a minivan, anyway.

The C300 handles well, but the lack of a visceral power boost over the A220 is a disappointment. Add to that the fact that the more powerful 2.0-liter turbo means its raspy scream is that much more grating at higher rpm, and you may wonder—as I did—why anyone would choose this over a Honda, Kia, or Toyota that costs tens of thousands of dollars less and does the same thing? I know, it's rhetorical: It's because people want to promenade that three-pointed star before them everywhere they go. (But if you tell me it's the wood trim, I'll have to call bullshit.)

One area where the C-Class shines is safety, where Mercedes-Benz has long been an industry leader. It's an Insurance Institute for Highway Safety (IIHS) Top Safety Pick+ thanks to outstanding crash test performance and an impressive array of active safety features. The problem, though, is that many of the most advanced safety technologies don't come standard on this car; instead, they add thousands of dollars to the already-high base price of a rather small car.

Mercedes-Benz builds nice cars, but in the end, they're all about status within a social hierarchy. Buying a car to reinforce one's position within it could be frivolous, although there are certainly people who work in industries where having a "cheap" car signals some level of professional failure. I can't imagine having a job like that—but then again, I wouldn't buy a Mercedes unless I could afford the most ridiculously fast AMG on the market (and in that case, I'd still go for those GLC-Class SUVs everyone loves to hate).

I'm sure I'll be raked over the coals for saying it, but for a family guy, a Honda Civic is a much better option than a C-Class. Sure, there are no woodgrain accents or adaptive damping, but it's inexpensive, fun to drive, gets great fuel economy, and it's significantly larger than the C-Class. And even if you need a luxury car, there are less expensive ones out there that'll do the trick, and offer more space in the trunk.

Besides, you could use all the money you save to send your kid to space camp. Then your little rocket scientist will be able to afford a proper S-Class someday...assuming we're still driving our own cars then.