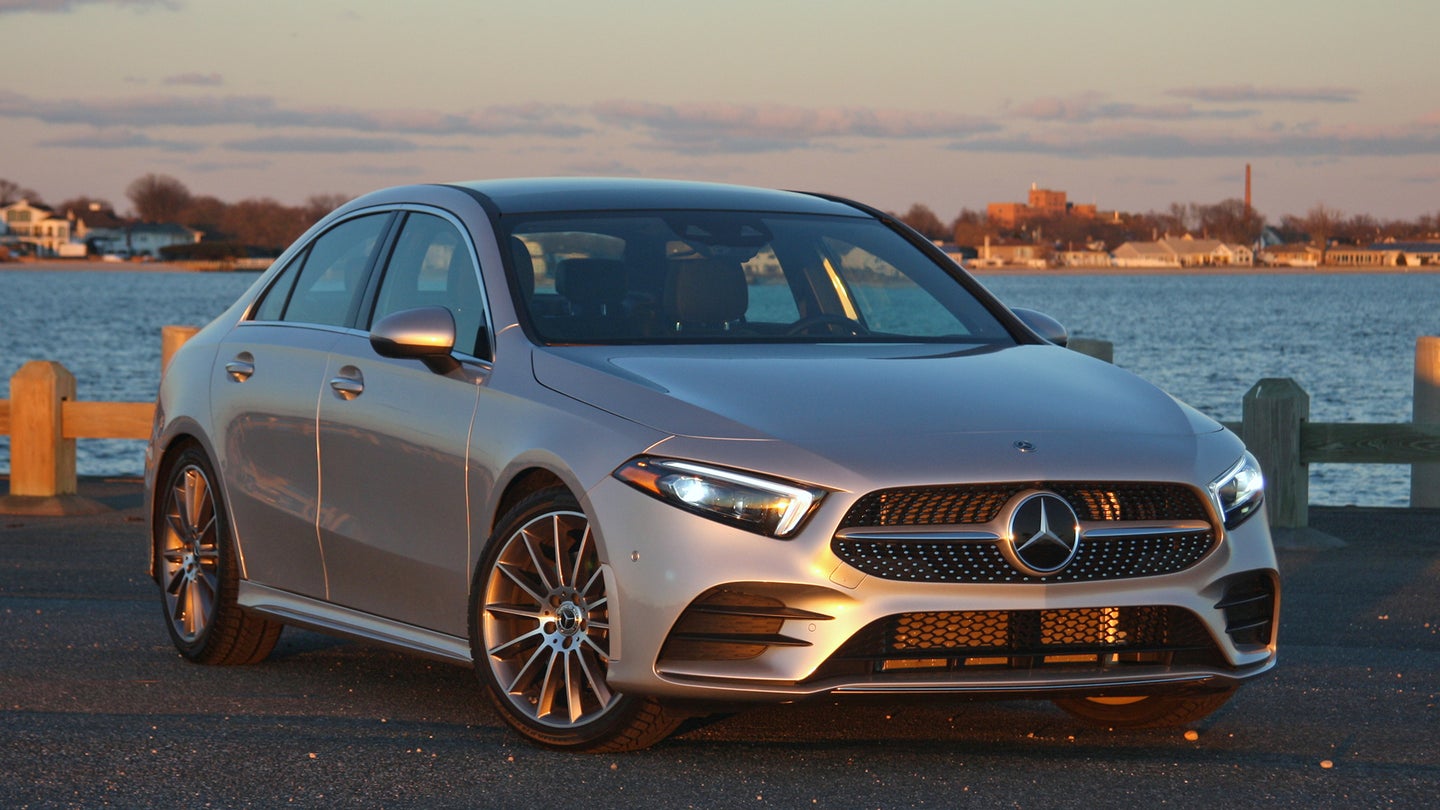 I finally did it: I'm a dad. The funny thing is, I've always owned dad cars, even before I needed to. Owning anything with less than four doors never made much sense, which is how I ended up with a stable of souped-up grandpa cars from the Sixties and Seventies. Now that I'm a father, the '74 Oldsmobile sedan I brought my wife and son home from the hospital in seems a bit dated. And that, my friends, is how I found myself on this quest to find the perfect new dad car. The latest contender: the all-new Mercedes-Benz A-Class.

I loathe the term "entry-level luxury." To me, it characterizes products that people who can't really afford luxury goods buy, even though they should really steer clear. "Aspirational" is even worse. In a nutshell, it means paying more for less to gain more credibility through unnecessary material trappings.

Bearing that in mind, I regard the newest Baby Benz with a degree of skeptical detachment. Don't get me wrong, it's a fine car. It's exquisite to drive; it looks great. Friends and family regarded me differently when they saw that three-pointed star. ("Ben, did you get a Mercedes?") I wore a bigger, fancier feather in my figurative hat just by being associated with it. My house somehow looked more impressive with the little Benz sitting in the driveway.

Furthermore, the luxury with which I was surrounded while behind the wheel of the A-Class convinced me that the Mercedes-Benz reputation that arouses this sort of awe in people is well-deserved. We're talking top-shelf quality. Aspirational or not, the front end of the A-Class is as Mercedes as one of the big, $150,000-plus Daddy Warbucks Benzes. Its long, powerful snout sports a big tri-star grille and muscular creases. A stiff chassis, front struts, and a four-link rear suspension give the A-Class the sporty ride it should have, and the car's turbocharged four-cylinder engine—although nowhere near the most powerful in its class—dishes out plenty of power for spirited driving. The interior is packed with technology—including a pair of Tesla-worthy display screens running along the entire top edge of the dash—and is resplendent with bling-y HVAC vent bezels and nightclub-chic colored mood lighting. Small size aside, Benz has reached a pinnacle of luxury (for the price) here.

But for a family man, luxury and speed aren't necessarily top priorities. Perhaps they are for the family man who can afford them, but for the modest patriarch who must resort to Mercedes-Benz's smallest sedan, I have to wonder if there isn't something he couldn't purchase that's still nice enough to turn heads, but also offers the wife, children and all their stuff a bit more space. My biggest beef with this car (other than its bourgeois conceit) is that it's tight. With my wife clamoring for me to move my seat—the driver's seat—forward to allow more space for the baby's safety seat in the middle of the back row, I found myself resenting the fact that I could wring more family-friendly capability out of a Kia that cost somewhere between $10,000 and almost $30,000 less.

I can't say too much about that price just yet, because Mercedes hasn't announced it. Suffice to say, though, that the A-Class will probably start in the low $30,000s, and with options added on will most likely push toward $50,000. Not cheap for a compact car without enough space for family members—even if it is a really nice car.

Sure, the GLA-Class crossover is only a few thousand more (in theory)—but it's small, too, even if it does have a rear hatch in lieu of a tiny sedan trunk. And the fact remains, you can get a roomier, more powerful Acura TLX nicely optioned for roughly as much money than the Benz—putting the A-Class on dubious footing as an option for family types thinking about how much they should spend on a car. Among other cars in its class, the TLX and Infiniti Q50 are definitely better options for the child-saddled, although even those would be a little cramped for those with kids in car seats. The A220's 12.0 cubic foot trunk—smaller than the BMW 3 Series's and TLX's cargo holds, but not the tiny Cadillac ATS—was no match for the load of stuff my mother-in-law sent us home with after a weekend visit.

Of course once I got my wife, son, stroller, diaper bag, and all our shopping shoehorned into the car, the A220 was a blast to drive. Smooth on the highway and responsive on twisty roads, it gives every indication that it's here to please the driving enthusiast. It's relatively thrifty, too—premium fuel requirement notwithstanding. My average fuel economy hovered around 27 mpg when I wasn't driving with the hammer down.

Like all Mercedes-Benz vehicles, safety is top-notch. The A220 comes standard with automatic emergency braking, as well as a system that detects an impending impact from the rear. The car will apply its brakes to keep itself from being pushed out into traffic. Lane keeping assist and active lane change assist are available, as is an adaptive cruise control system that can regulate speed into turns and near intersections. Neither the Insurance Institute for Highway Safety nor the federal government have released crash safety ratings for the A-Class yet, though.

When I stepped out of the car and regarded its profile, the stubby back end (relative to that long, luxurious nose) reaffirmed my notion that the A-Class is not a good option for those of us forced to grind it out in traffic day after day loaded down with childcare gear and groceries. Being pretend-rich as anyone with an entry-level luxury car is apt to be, it's no sweat to shell out for delivery of groceries and other supplies. But even someone wealthy enough to purchase a Mercedes-Benz has to fit their children in the car at some point. No one else will deliver them until the chauffeur-driven Maybach is in the budget.

Perhaps the Baby Benz was just fine back in the days when new parents didn't have to schlep around so much stuff (if those days ever existed). But contemporary parents will most likely continue their relentless shuffle toward the crossover section of dealership lots. Will small Mercedes sedans make it in today's America? Maybe—but I think it will depend upon the number of DINKs willing to buy them.