Mercedes-Benz's big convertible may be expensive—really, really expensive—but this V8 land yacht still manages to be something of a bargain.

I finally did it: I'm a dad. The funny thing is, I've always owned dad cars, even before I needed to. Owning anything with less than four doors never made much sense, which is how I ended up with a stable of souped-up grandpa cars from the Sixties and Seventies. Now that I'm a father, the '74 Oldsmobile sedan I brought my wife and son home from the hospital in seems a bit dated. And that, my friends, is how I found myself on this quest to find the perfect new dad car. The most recent contestant: The 2018 Mercedes-Benz S560 Cabriolet.

My son doesn't yet understand much of what I say to him (at least I hope not, as I haven't yet learned how to filter my speech when he's present). Which is great, because I can tell him that he resembles Winston Churchill, and he can't retort that I look like Matthew McConaughey minus the good looks. Once my son does pick up the ins and outs of the English language, however, I intend to teach him the value of a dollar. It's a lesson I'd be hard-pressed to impart from behind the wheel of a Mercedes-Benz S-Class convertible, a car better suited for teaching him a live-action lesson about the Marquis St. Evrémonde's aversion to street urchins. (Note: no urchins were run down in the making of this review.)

As I drove him around in the S560 Cabriolet—a white example, with a dark blue top that cost more than the shingles covering my house—I couldn't help but wonder what he thought, staring backwards through the open roof at the gaggle of envious poor people that seemed always to be surrounding the car. His baby seat was nestled in a setting of hand-stitched, cream-colored leather. The stentorian braaaap-p-p of the car's 463-horsepower biturbo V8 put him right to sleep as surely as if he'd been laying upon a mattress stuffed with $100 bills. I'm sure that somewhere, a Madame Defarge-like character was knitting our names into a list of the damned as a result of my ostentation, however temporary.

But I'm getting ahead of myself. Filial entitlement issues aside, the pros of this car are many. It's a gorgeous manifestation of German engineering prowess. Its long nose, powerful acceleration, big tri-pointed star grille, and rear deck ornaments project wealth, confidence, and good taste. There's no way the driver of this car isn't going to look like a badass—or at least like someone who can afford not to interact with people who don't have nice things.

The car's impressive exterior speaks for itself, but the interior—the opulent refuge within which the driver and one, maybe two or three passengers are ensconced—is every bit as lovely. Round digital gauges and a row of circular HVAC vents recall the elegant simplicity of the Mercedes-Benzes of past decades, but the throwback aesthetic has been rolled into modern amenities like a huge center-stack flatscreen display and an easy-to-use touchpad and click-wheel setup with which to control it. It all really is alluring.

But the S560 Cabriolet isn't much of an option for the family man. It may be just the thing for the tycoon looking to snare a mate, but for the guy who has already started his brood, there's not really much space in the car for anything other than the driver, a front seat passenger, and maybe a couple of small designer duffel bags. Rear seat passengers should, preferably, be legless. If one happens to be a scion enthroned in a rear-facing child safety seat, there won't be much room for the front passenger's legs. (My wife had to sit scrunched sideways, with her knees pressed up against the dash.) Just getting the child safety seat into the car is tricky—a contortionist's exercise that left the baby looking concerned by the time he'd been jostled into the back seat.

The trunk is tiny—less than nine square feet—and by the time Mercedes-Benz's Rube Goldbergian roof mechanism finishes folding the top neatly into its hard cowl-covered cubby, the volume is cut in half. My son's stroller (and nothing else of consequence) fit into the trunk okay with the top up, but top-down, there was no place to stow it. We're top-down people when we can get it, so the stroller got left behind junior can't walk yet, so I had to carry him. (If I had been wearing the $9,000 Brioni suit the driver of a car like this probably should be wearing, I'd have been very concerned about damage from drool and other strange leaks; fortunately, I wear beat-up Subaru-owner clothes.) Extra items like the diaper bag and my wife's laptop bag had to be jammed wherever there was space—the already-tight back seat, in most cases. 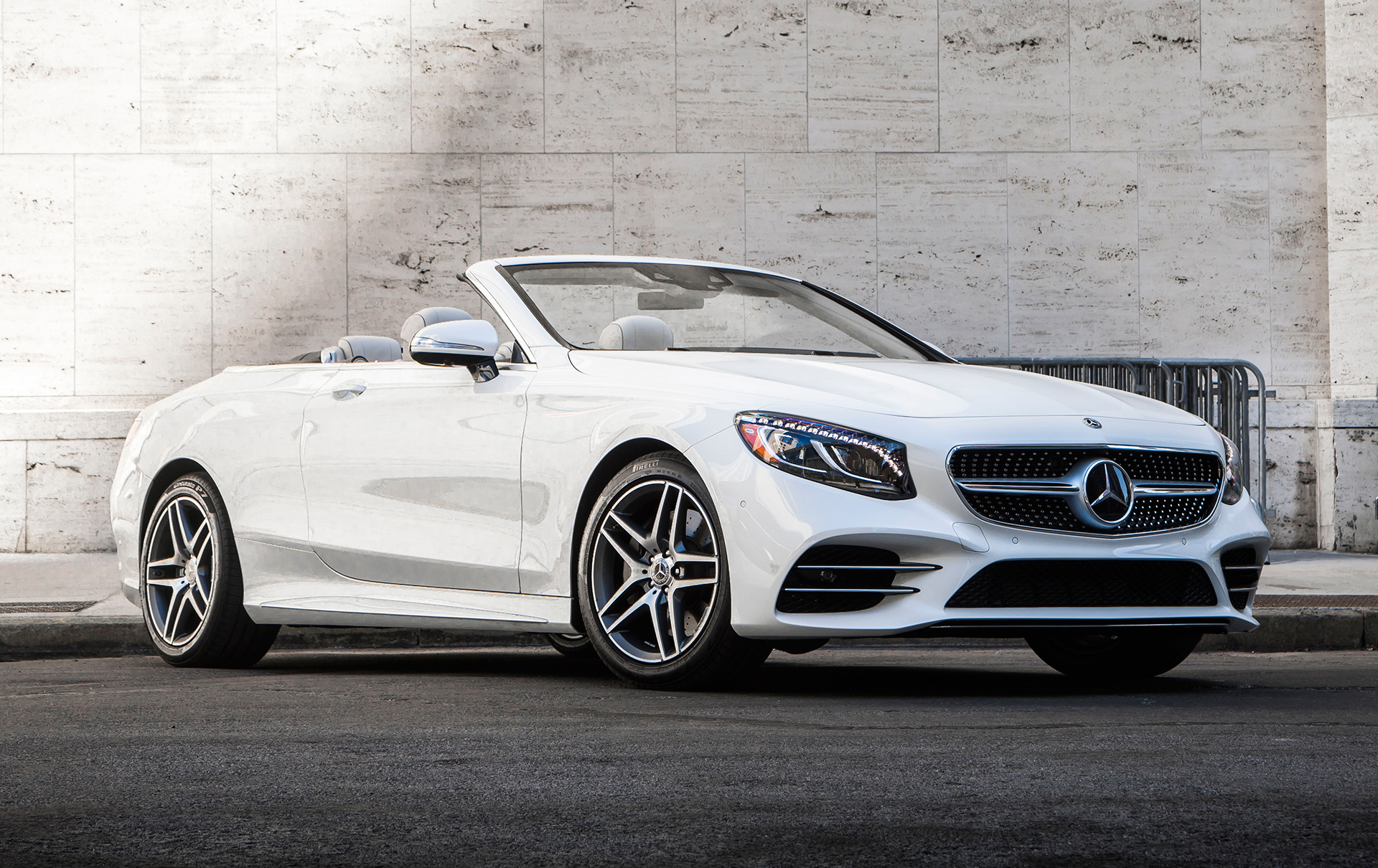 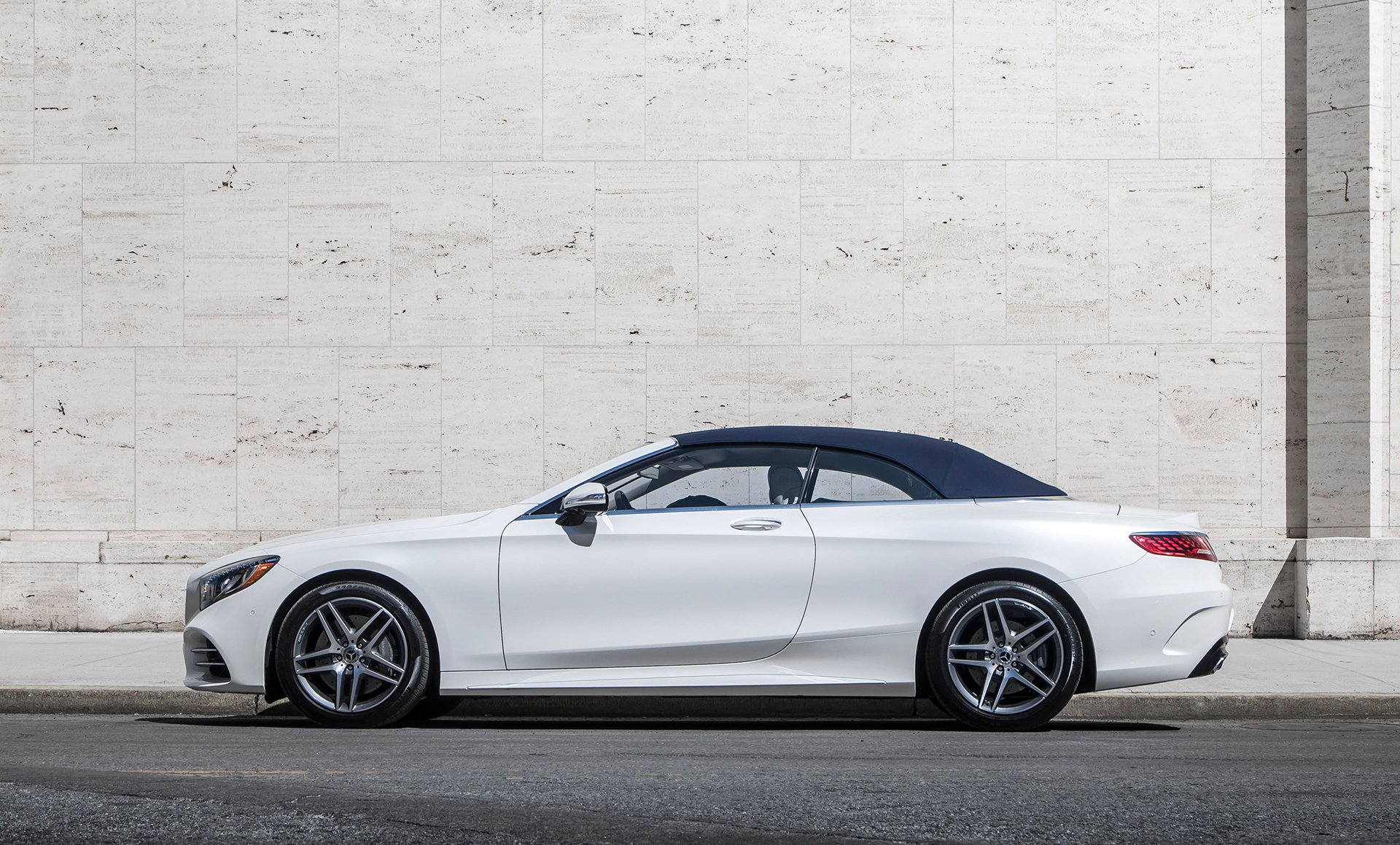 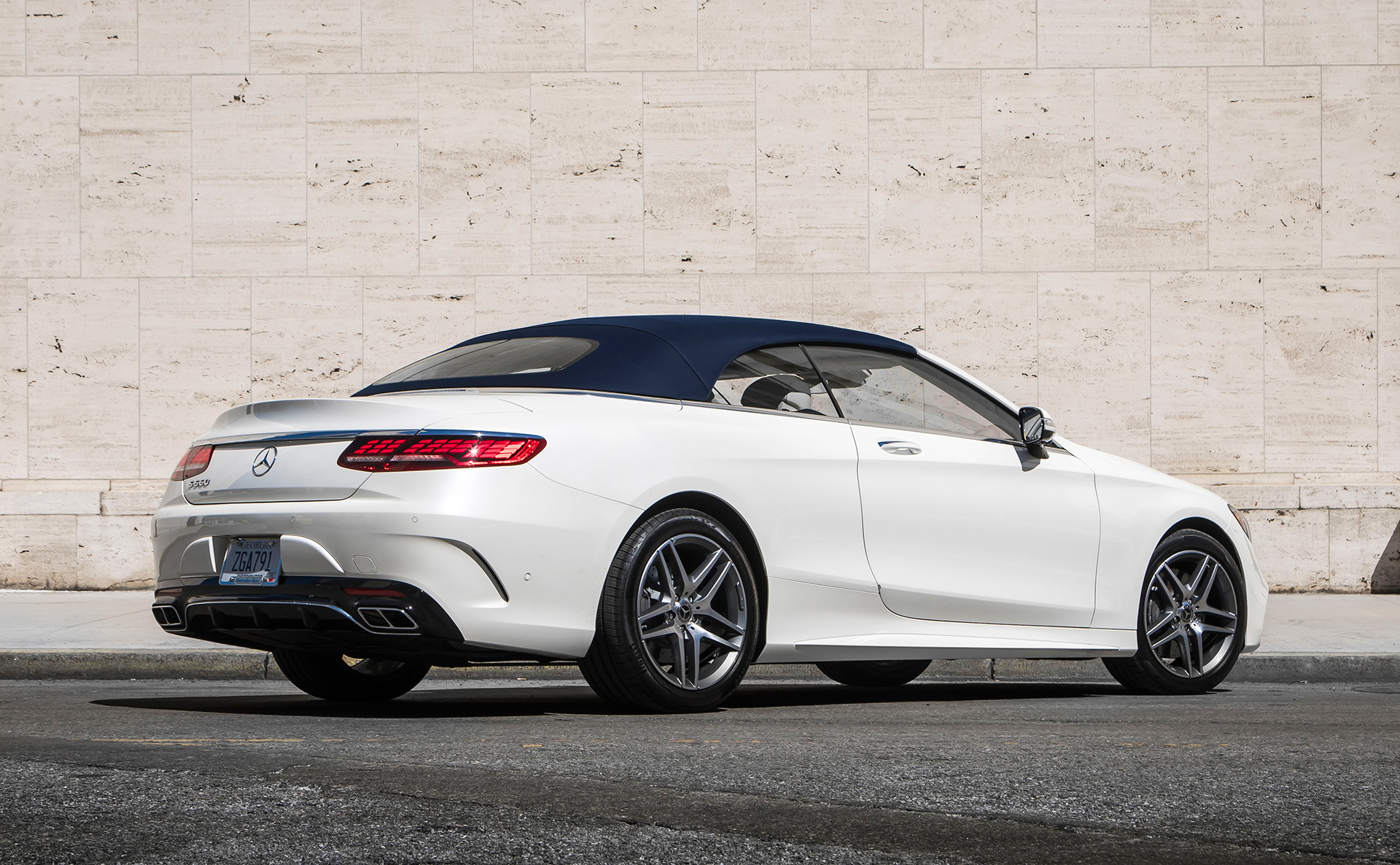 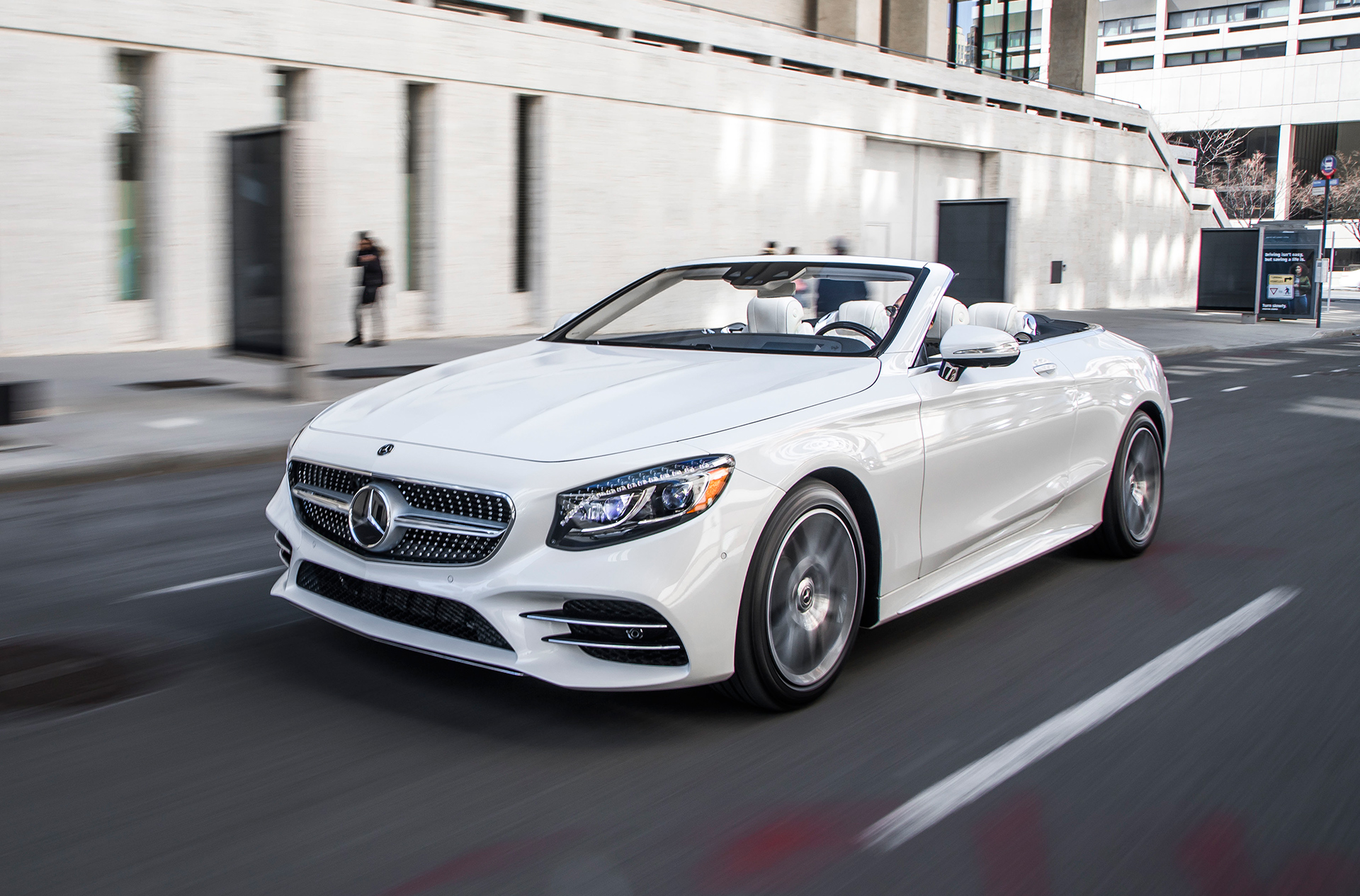 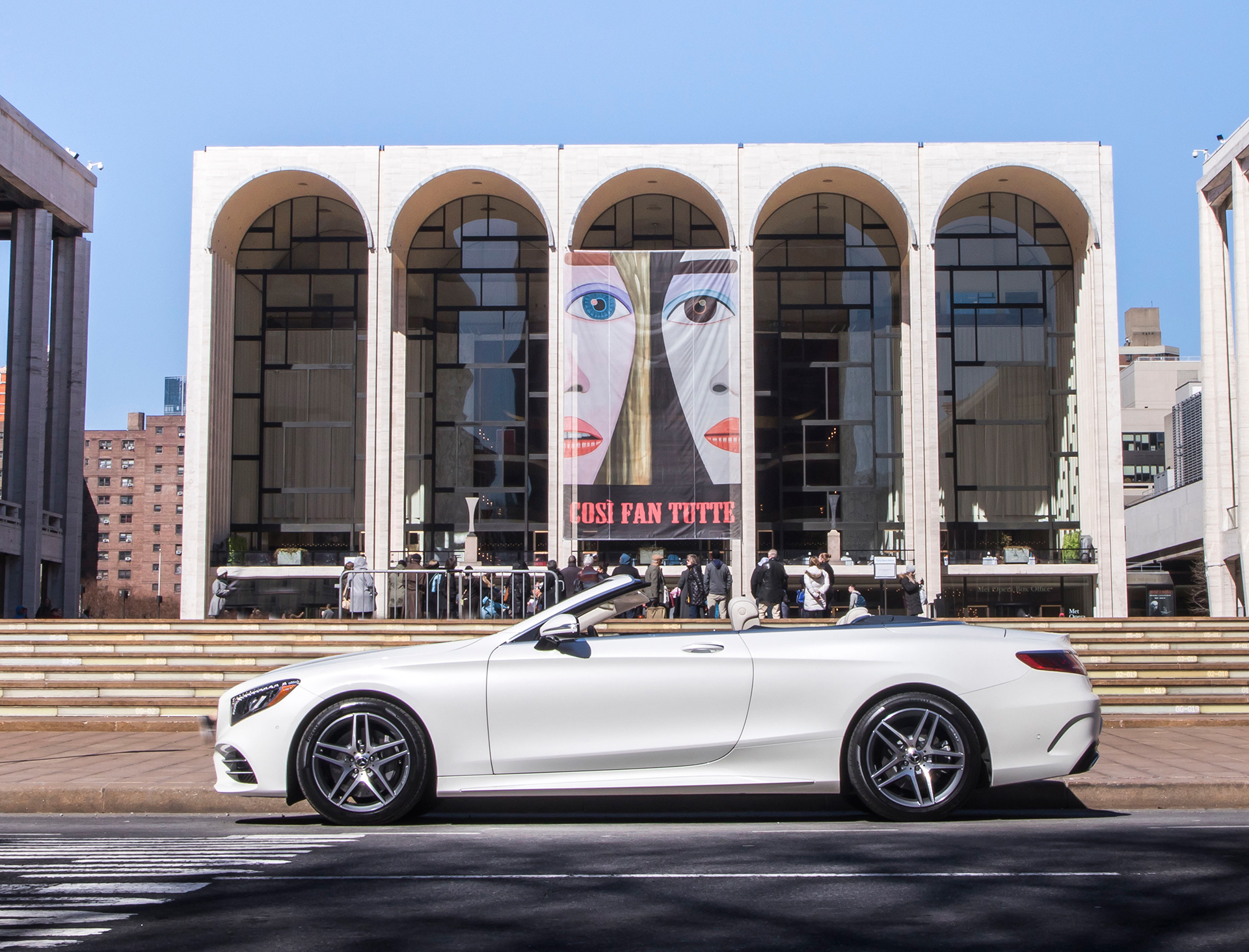 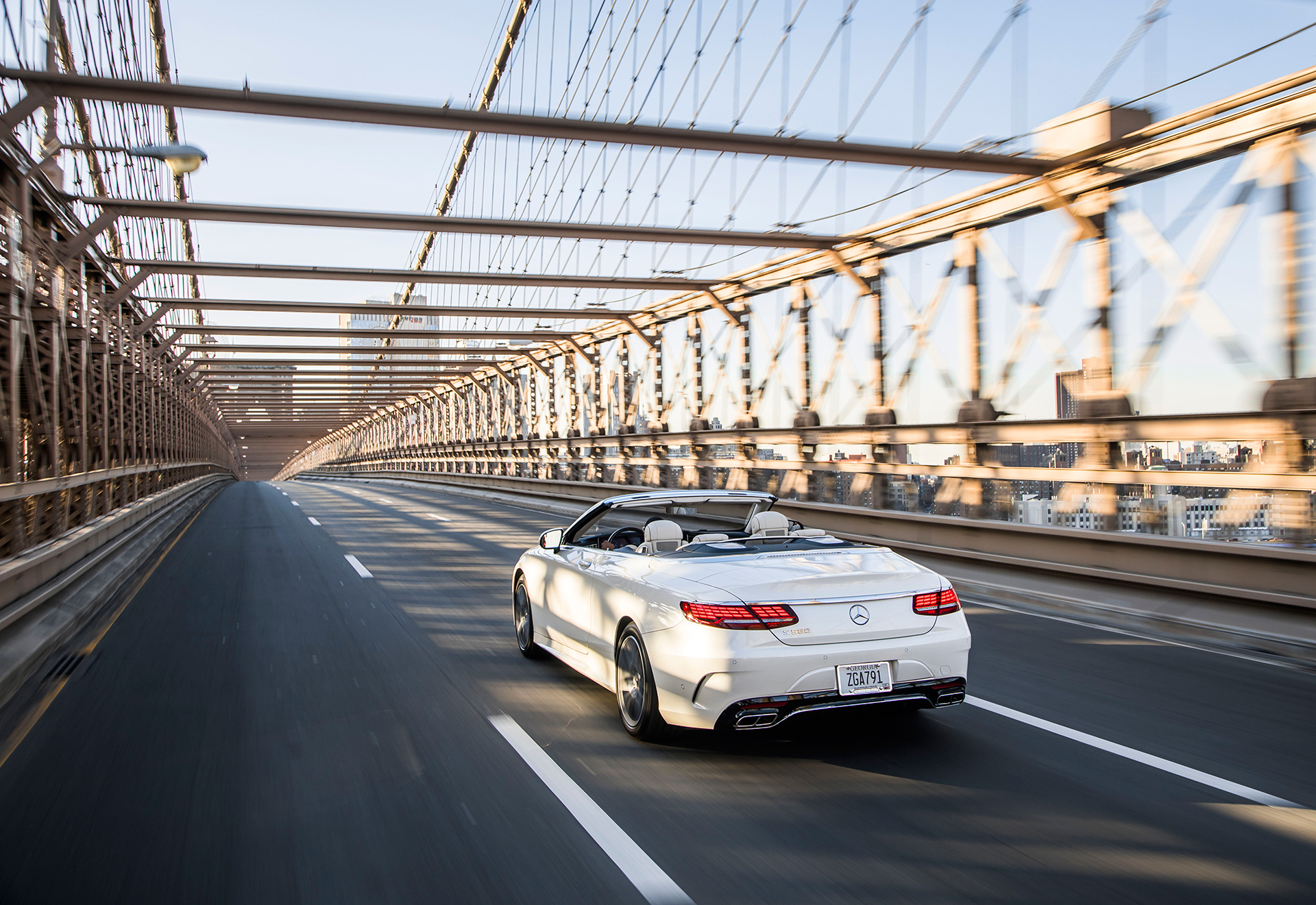 My best guess is that—aside from the recently-divorced magnate on the prowl for a new trophy wife—a car like this is best suited for the dad who seeks to escape from his family, possibly with a mistress. (My wife was not amused by this line of reasoning, but figured that because I can only afford the ancient, battered Subaru I already own, she had little cause for concern.) Even so, with a trunk that's only five-to-nine cubic feet, the mistress wouldn't be able to pack too many outfits in her weekend bag. But I guess that's what credit cards are for—to buy stuff when you get there.

But perhaps this is a car best enjoyed alone, a familial respite more temporary than "going out for cigarettes" and less disruptive than tying up the can with long periods of not-so-quiet contemplation. Cruising solo on a sunlit coastal parkway with the wind in my hair and "Rags to Riches" blaring on the S560's premium stereo system, I began thinking that maybe I should revise junior's value-of-a-dollar lessons. Sure, this car costs more than many people's homes, but among other high-end luxury cars, which other marque puts you in a position to buy so much prestige for so little money, and with such high levels of quality? Viewed in that light, this Mercedes-Benz cabriolet is a screaming deal, and a good lesson in value. 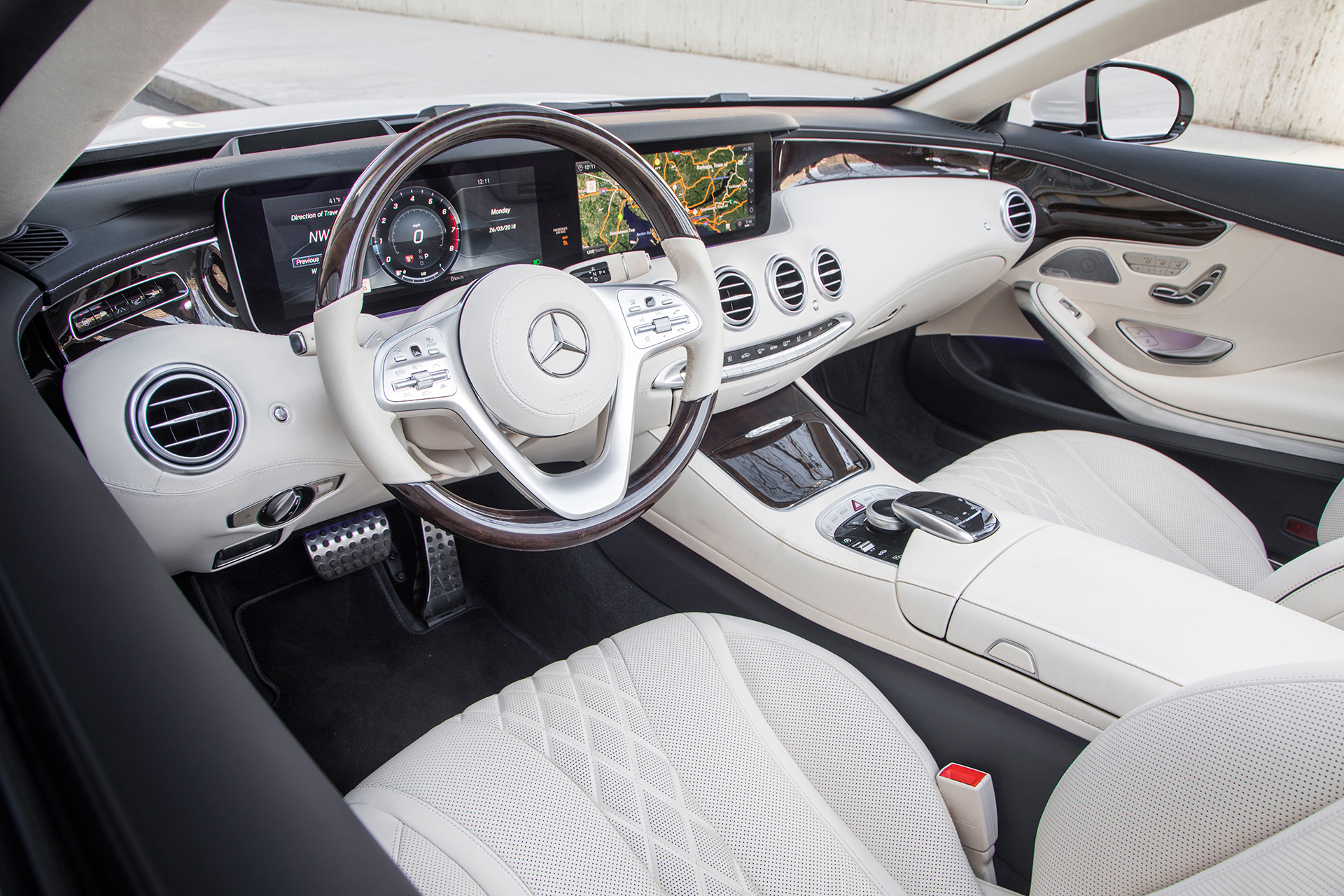 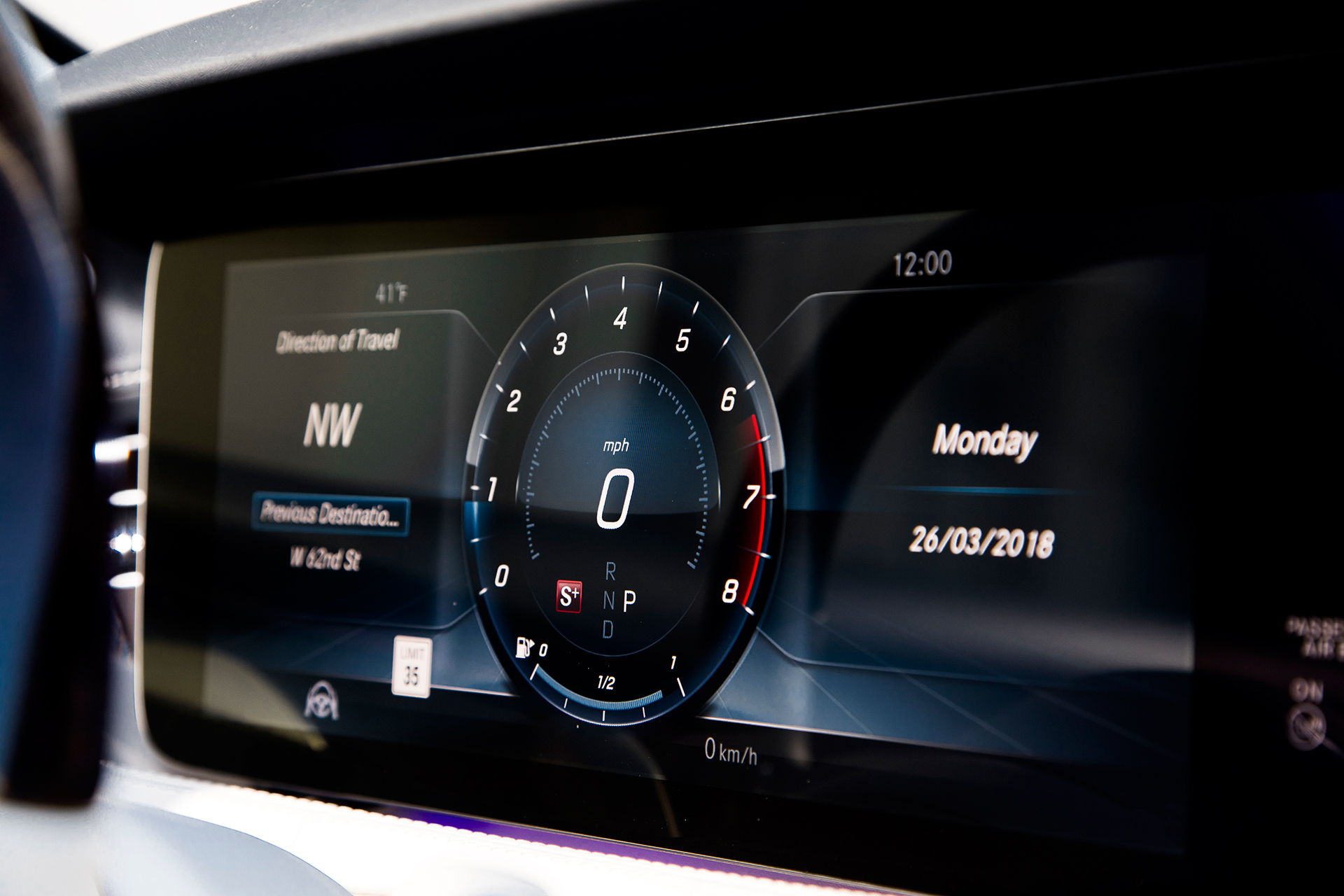 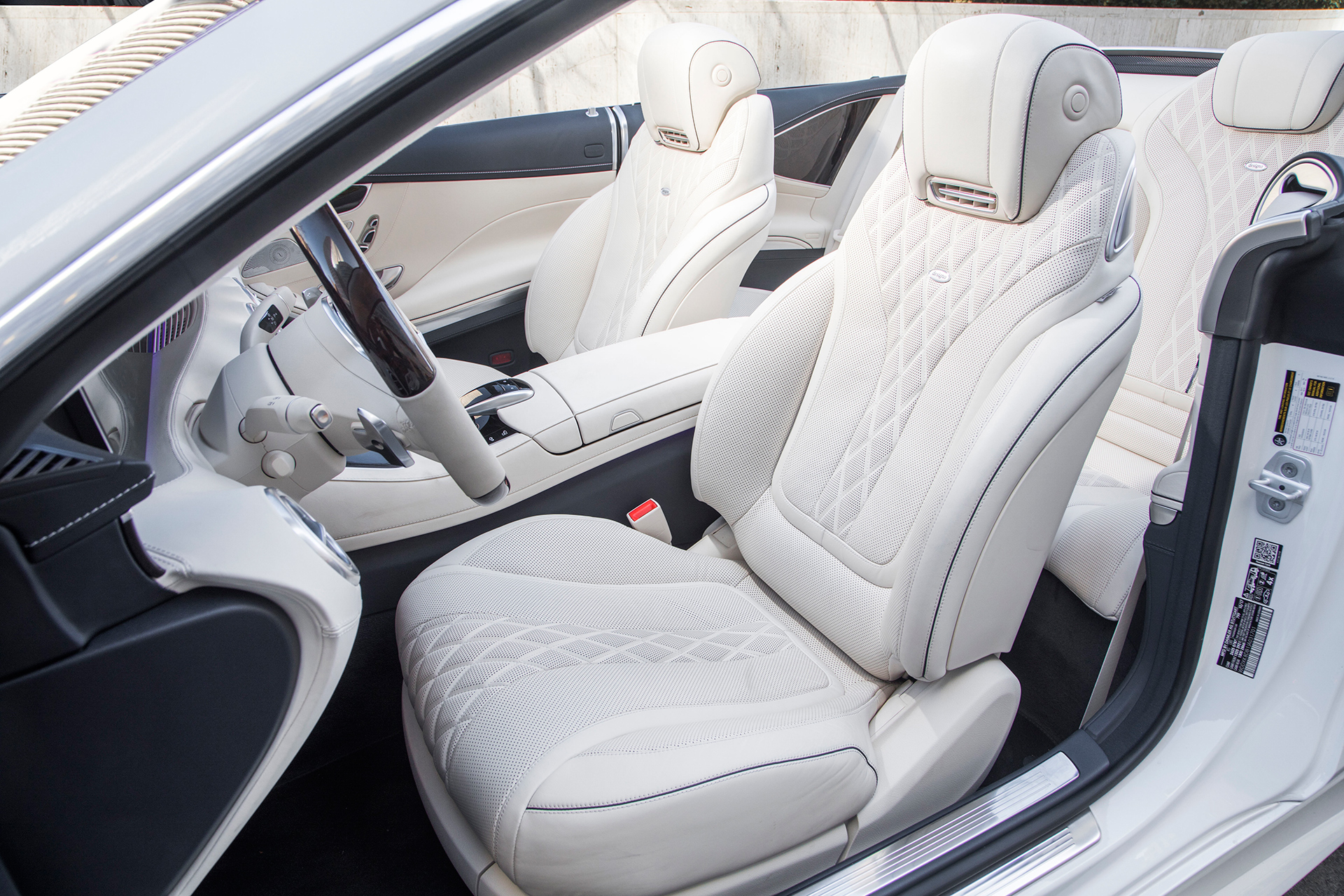 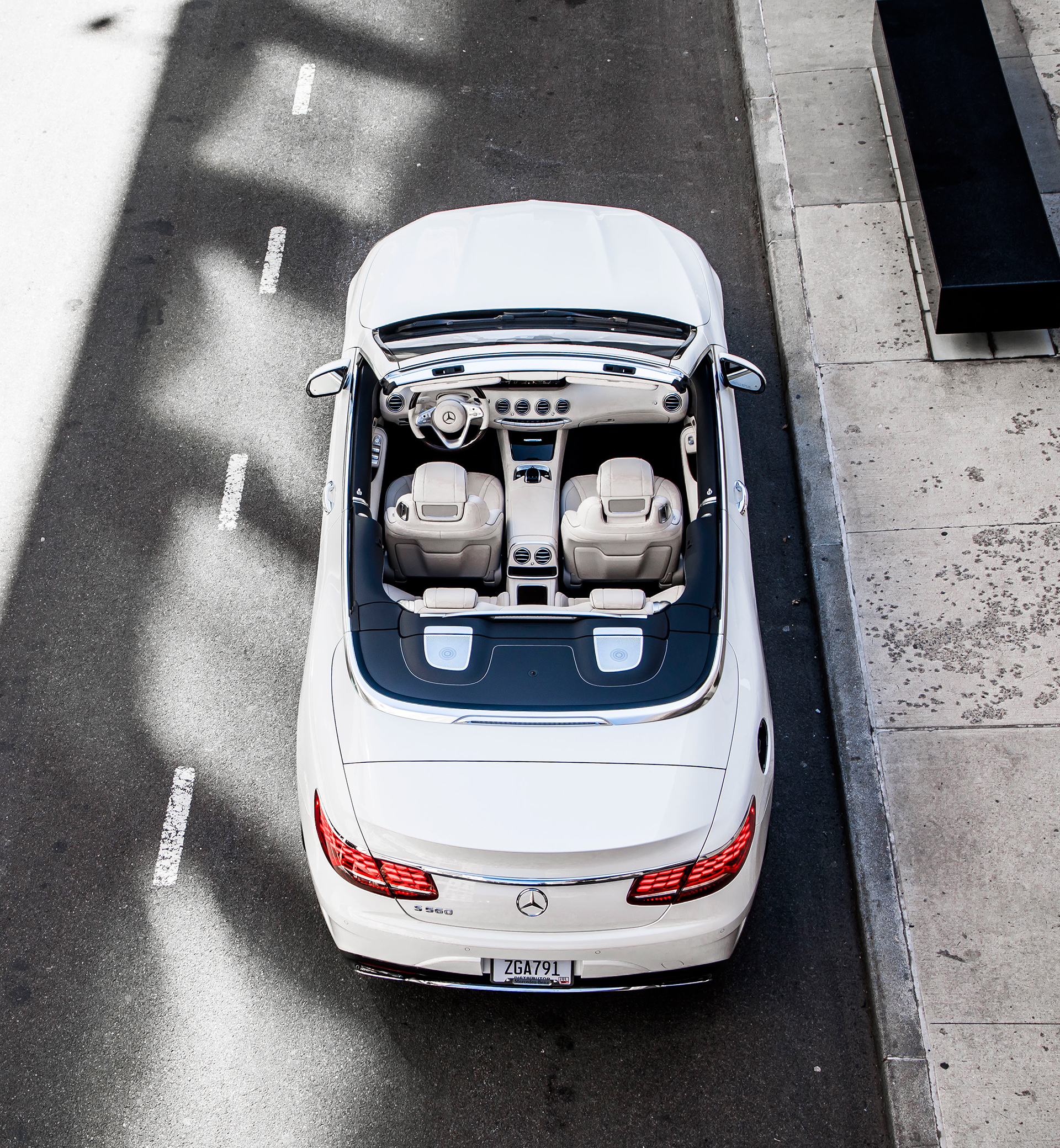