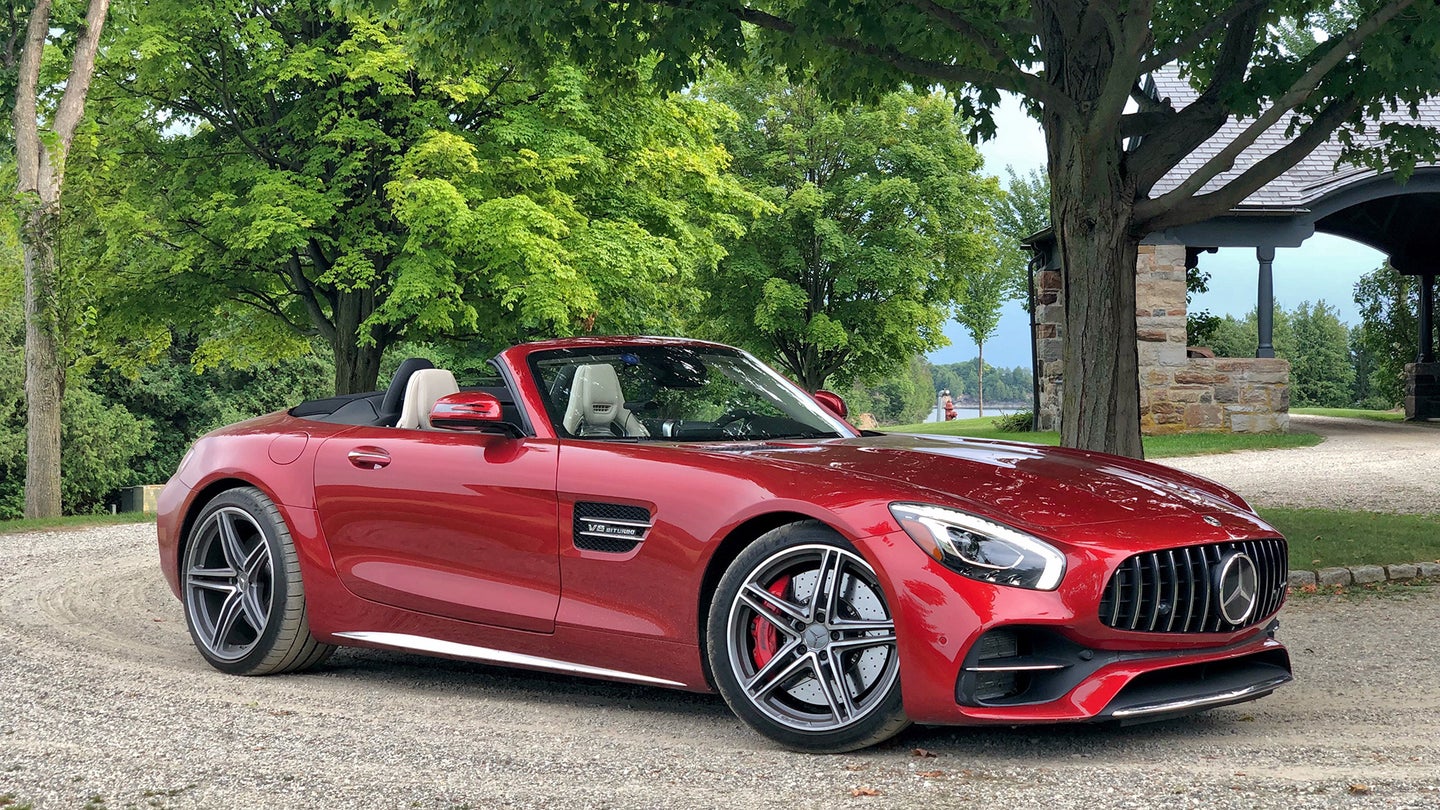 Welcome to Critic's Notebook, a quick and off-the-cuff car review consisting of impressions, jottings, and marginalia regarding whatever The Drive writers happen to be driving. Today's edition: the 2018 Mercedes-AMG GT C Roadster.

The 2018 Mercedes-AMG GT C Roadster, By the Numbers:

Quick Take: Packing some of AMG's sharpest performance tech and one of its hottest V8s beneath its elongated hood, Mercedes-Benz's droptop GT C is poised to take the fight to the likes of the Porsche 911, Audi R8, and McLaren 570S.

Much as the purveyors of madcap merchandise from AMG might wish otherwise, when you think of sharp-edged sports cars grown in the greater Stuttgart region, you're way more likely to picture a Porsche than imagine a Mercedes. It's no slight against the Three-Pointed Star; after all, the carmaker has churned out more than its fair share of elegant speed machines, racking up a remarkable list of racing championships, critical accolades, and cultural touchstones along the way. But Mercedes-Benz has spent a century and a quarter building all sorts of vehicles: sedans, vans, trucks, buses, convertibles, coupes, sport-utility vehicles, even the occasional bicycle. Porsche, on the other hand, spent the first seven decades of its 87-year history making nothing but sports cars.

Yet the engineers, designers, and product planners of Affalterbach—their once-independent tuning shop long since integrated into Benz's operations, and now officially its own sub-brand within the company—certainly aren't ones to shy from the challenge of redefining popular perception of Baden-Württemberg's sports cars. After lending their powertrain expertise to the utterly exotic Mercedes-Benz SLR McLaren of the early Aughts, the AMG gurus took the work in-house for its successor, mutating and evolving an aluminum chassis from the Mopar side of the Daimler-Chrysler "merger of equals" into the gullwinged SLS AMG. Like its SLR predecessor, that car turned heads from the moment it hit the streets in 2010; but also like it, the technology that made it so potent aged quickly in the modern era, rendering it outdated by mid-decade. So in 2014, AMG revealed its newest sports car creation: the GT, launching in 503-hp

The Mercedes-AMG GT C Roadster seen here occupies a spot near the top of the roster, though its $159K base price is still some $30,000 cheaper than even the base SLS AMG coupe of eight years back. Packing a 4.0-liter twin turbo V8 grinding two-and-a-quarter horses out of each cubic inch, four-wheel steering, and an adaptive sport suspension, this droptop Benz Mercedes delivers the specs you'd expect from a car set to set lap times. Yet its power folding top, quilted leather interior, cooled seats, and warm air-blowing headrests all scream "Sunday driver" over "race on Sunday, sell on Monday." So which way does this two-faced Merc look most often? Your humble author fired it north to Vermont to find out. (As well as to see his mother for her birthday, an occasion which family tradition dictates he drive her to dinner in a fast convertible.)

Certain members of the AMG GT lineup are, arguably, a decent value. The GT R that stands as one of the fastest front-engined production car at the Nurburgring Nordschleife is arguably one of the better sports car steals of 2018, delivering Benz build quality and legit supercar performance for the price of a loaded 7 Series; on the other end of the family, the base AMG GT coupe delivers all the glamour and most of the speed of its pricier siblings at two-thirds the as-tested price of my droptop GT C. But this roadster's indecisive personality and high price (for its family) means it's hard to describe it as a real value, per se. Not that people looking to buy a two-seat Mercedes convertible that does nearly 200 mph are really looking for "value," mind you, but still.

The Mercedes-AMG S65 Cabriolet is inarguably a better car for a long road trip, but it'll leave you longing for something more agile when the road turns winding. The AMG GT R is far better for attacking tracks, but on the drive to and from there, you'll be wishing for an escape from the spider-hole of an interior. The GT C Roadster splits the difference between them, a jack-of-both-trades that masters neither but still delivers more than enough road-trip pleasure and corner-carving excellence to exceed the expectations of mortal men and women. It may not fit the traditional version of the term, but its capabilities make it—even with all of its compromises and flaws—a super car.

Part of the joy of modern day supercars is the forbidden nature of their talents. Not just in terms of their lofty prices that put them out of reach for most of us, but the way that you can only take advantage of their full power for a few moments at a time. There's a reason the 'Ring dominates discussion about the performance of these cars: it's the closest thing to a real road where they can cut loose. There's no stretch of public highway that can handle these level of power and grip for long. The GT C may not be a traditional supercar, but when it comes to having its potential hemmed in by public roads, it ranks up there with the likes of McLarens and Lamborghinis. Now, if only it had a few more inches of room inside...