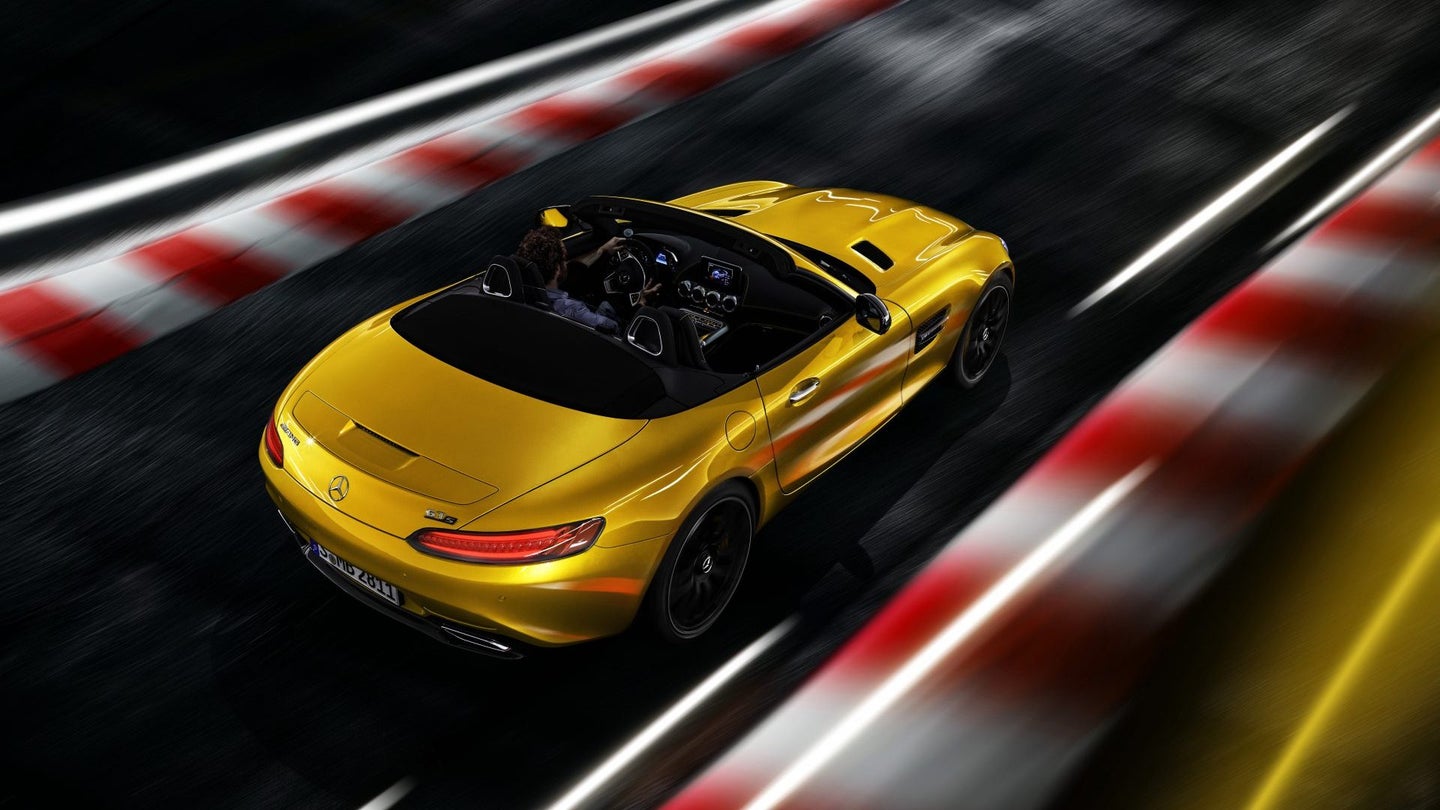 Mercedes-AMG has announced a new variant of its AMG GT Roadster—the GT S Roadster—which will occupy a middle ground between the round-tipped GT Roadster and the razor sharp GT C Roadster. It will bridge the performance and price gap between its predecessors, for a car that some may deem just right. It further adds to the AMG GT lineup, fattened last week by the GT 63 S Edition 1

To compare the GT S Roadster with a bowl of lukewarm porridge and a comfy mattress belies the nature of the car, which is both more exciting and comfy than either of the aforementioned simple comforts. After all, the GT S Roadster is still powered by a 4.0 liter, twin-turbo V8, making 515 horsepower and 494 pound-feet of torque in this presentation. Standstill to 60 is happens in an approximate 3.7 seconds, around two tenths of a second quicker than the GT, but one slower than the GT C.

The differences in horsepower position the GT S's top speed dead center between its counterparts, with a 192 mph terminus, its siblings topping out at 4 mpg below and above this mark.

Despite all three tiers sharing engines, dual clutch seven-speed transmissions, and aluminum driveshafts, the differential is not shared across all Roadster variants. The GT S receives the GT C's electronically actuated unit, as opposed to the GT's mechanical differential. The exhaust system is similarly dynamic, with the GT's sport exhaust foregone for the GT C's multimodal exhaust.

Inside, it is unclear which upholstery materials are considered the premium option by Mercedes-AMG, with leather both real and faux appearing across the GT Roadster price range. The GT model receives Dinamica microfiber faux leather as its upholstery material and Nappa leather for its steering wheel, while the GT C swaps the two, albeit retaining a leather wheel as an option. The GT S compromises by sharing the GT's Dinamica upholstery and the GT C's selection of steering wheel cladding, with customers receiving a choice between leather real and not real.

To keep the ride comfy, regardless of upholstery spec, the GT S adopts the C's adaptive damping system, which can be toggled between Comfort, Sport, and Sport+ modes. Powertrain modes are further customizable, with five settings: Comfort, Sport, Sport+, Race, or mix and match Individual.

Mercedes promises the AMG GT S Roadster will be in United States dealerships by late 2018.

Pricing has not yet been announced, but with its performance being situated between that of the GT and GT C Roadster, a price between the GT and GT C's respective MSRPs of $124,400 and $157,000 is likely. In this window, the GT S's chief rival is Porsche's $117,400 911 Carrera S Cabriolet.

BMW's i8 Roadster, despite being a six-figure, open-topped German sports car, is too expensive to be comparable, starting $6,300 above the GT C Roadster, and its performance is a rung below that of even the 911. Its own roadster, the Z4, is due for a full overhaul in the near future, as part of a joint project with Toyota, but the Z4's price range is expected to be nowhere near that of the AMG GT Roadster.

There are now even more ways to make your new, four-door AMG GT coupe distinct.

As for other vehicles in the automaker’s lineup, it’s too early to tell.