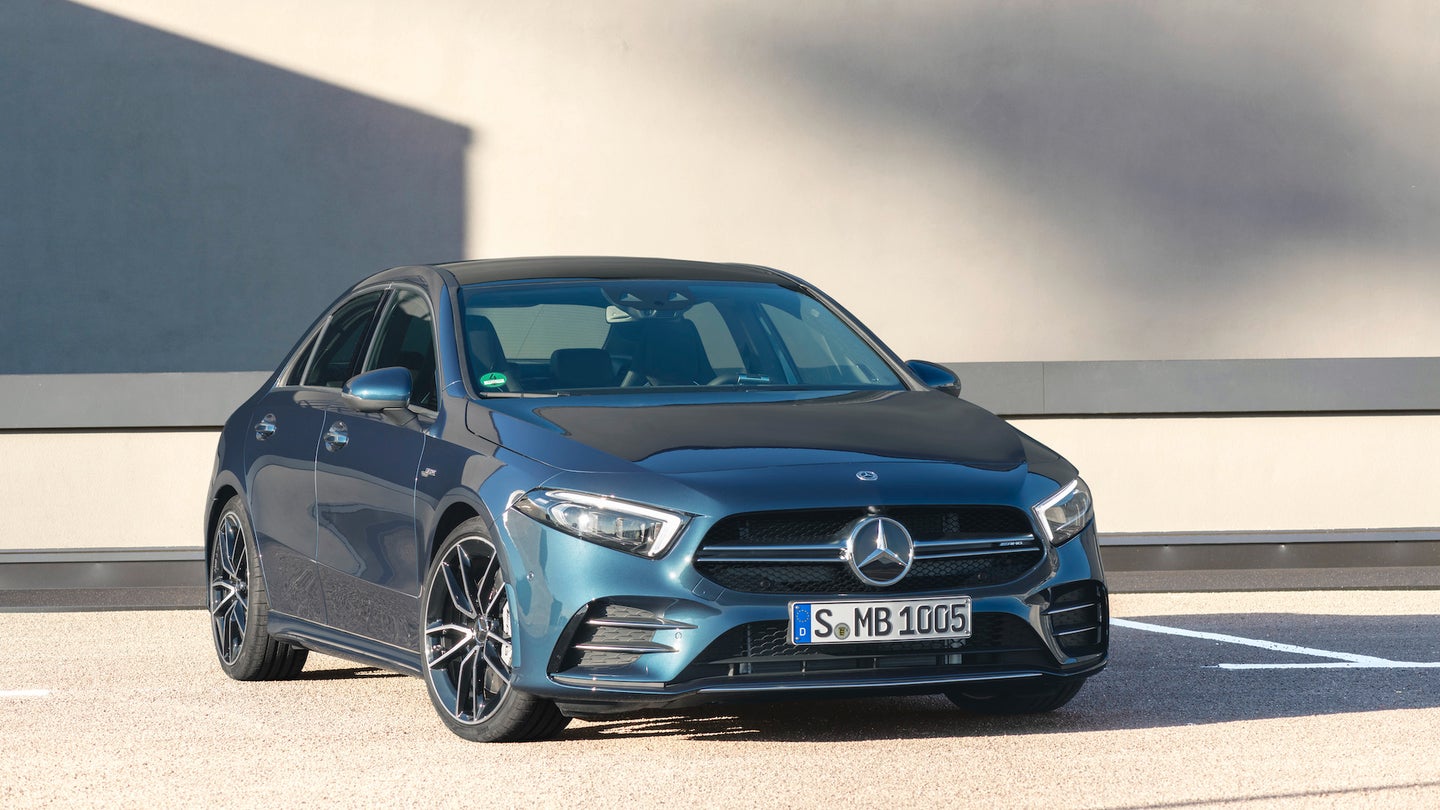 Topline: Though it may be the most accessible AMG sedan, it doesn't dilute the marque's high-performance formula, instead, it brings it down to shooter bottle size.

What's New: Mercedes doubles down on its sporting A-classes by adding the sedan body to the AMG stable, occupied previously by only the A 35 AMG hatchback. Both share a turbocharged 2.0-liter four-banger, which dispenses 302 horsepower and 295 pound-feet of torque through a front-biased all-wheel-drive stem and a dual-clutch, seven-speed automatic transmission. By engaging the car's "Race-Start" launch control, the A 35 will reach 60 miles per hour from a standstill in 4.7 seconds, which is quick enough to put an unflattering look on your face. Mercedes says the top speed is "TBA," but the hatchback is limited to 155 mph, so expect this to be as well.

True to AMG style, the A 35 doesn't do go without a show. There's an AMG Night Package that adds black exterior trim elements and heat-resistant rear glass tint, but also a functional AMG Aerodynamics Package, which throws on a front splitter and small rear spoiler to generate additional downforce while cornering at Autobahn (or Californiabahn) speeds. Variable-ratio electromechanical steering means that even if traction is lost at those speeds, it can be reattained.

Being a Mercedes, it also has a tamer side. For when Sport or Sport+ driving modes are a little too stimulating, there's a Comfort mode, and when even that's too hairy, Slippery mode will get you home through any weather conditions. Individual mode allows a mix-and-match of the other modes' attributes, from damping rates to steering rack speed and throttle response.

Quotable: "Following the very successful launch of the hatchback model, things are moving along dynamically in the compact class segment at AMG," said Mercedes-AMG CEO Tobias Moers. "Sport sedans are the origin of Mercedes-AMG and part of the brand's core. With our new A 35, we are transporting this history into modern times in the form of a very attractive model that serves as a point of entry into the world of AMG and also appeals to new customer groups."

What You Need to Know: If you're looking for the quickest entry-level German family vehicle money can buy, hold your horses. There will reportedly be an AMG A 45, one with more than 400 horsepower and a nine-speed dual-clutch transmission, good for a supercar-fighting zero-to-60 of under four seconds. If there'll be a hatchback version, you can bet your sweet seat interface there'll be a sedan too.

Though the A-class hatch will be sold in Canada, but not Stateside, Mercedes-AMG confirmed to The Drive that the 2020 A 35 will be sold in the United States starting in spring of 2020. Plans are for pricing to be released closer to the A 35's arrival in showrooms. Mercedes also confirmed that the A 45 will be sold globally, but has not settled on whether the model will be sold here.

2019 Mercedes-AMG E53 Coupe Review: Not the AMG You Expect, But Pleasant All the Same

Mercedes fires another half-caf latte onto the menu for those who don’t need the full-strength version of an AMG.